Over the years, the hydro, gas and nuclear power segments have been weighed down by a number of issues, leading to slow capacity addition in these segments, falling plant load factors (PLFs) and financial distress. In the session, “Forgotten Trinity – Hydro, Gas and Nuclear”, Aniruddha Kumar, Balraj Joshi and Pankaj Batra spoke about the challenges and outlook for these segments. Excerpts….

Has the trinity been forgotten?

It may appear to be that in the past six to seven years, the focus of the government has been on renewable energy, but that is not exactly so as the power ministry has been occupied with eliminating the energy deficit. Hydro projects are not so easy to build, as they take a long time and then there are issues like clearances, high costs and public resistance, among others. Thermal has been able to deliver and bring the energy deficit to almost zero. That said, hydro is still very close to the heart of the Ministry of Power. A hydropower policy proposal has been moved for inter-ministerial consultations. For nuclear, around 20,000 MW is targeted by 2030. That said, it is certainly not going to be the mainstay of the energy basket in India, though investments will be pursued from a strategic point of view. As far as gas is concerned, while globally a fair proportion of energy is drawn from gas plants, in India unfortunately, inadequate availability of domestic gas is a constraint. Plants are being run at a PLF of barely 22 per cent. The existing plants are able to meet only one-fourth of the gas demand. Approximately 14,000 MW of gas-based capacity does not have any gas and is, therefore, stranded completely. It is very expensive to run imported liquefied natural gas plants. Gas does not have a very bright future in India unless domestic production goes up. 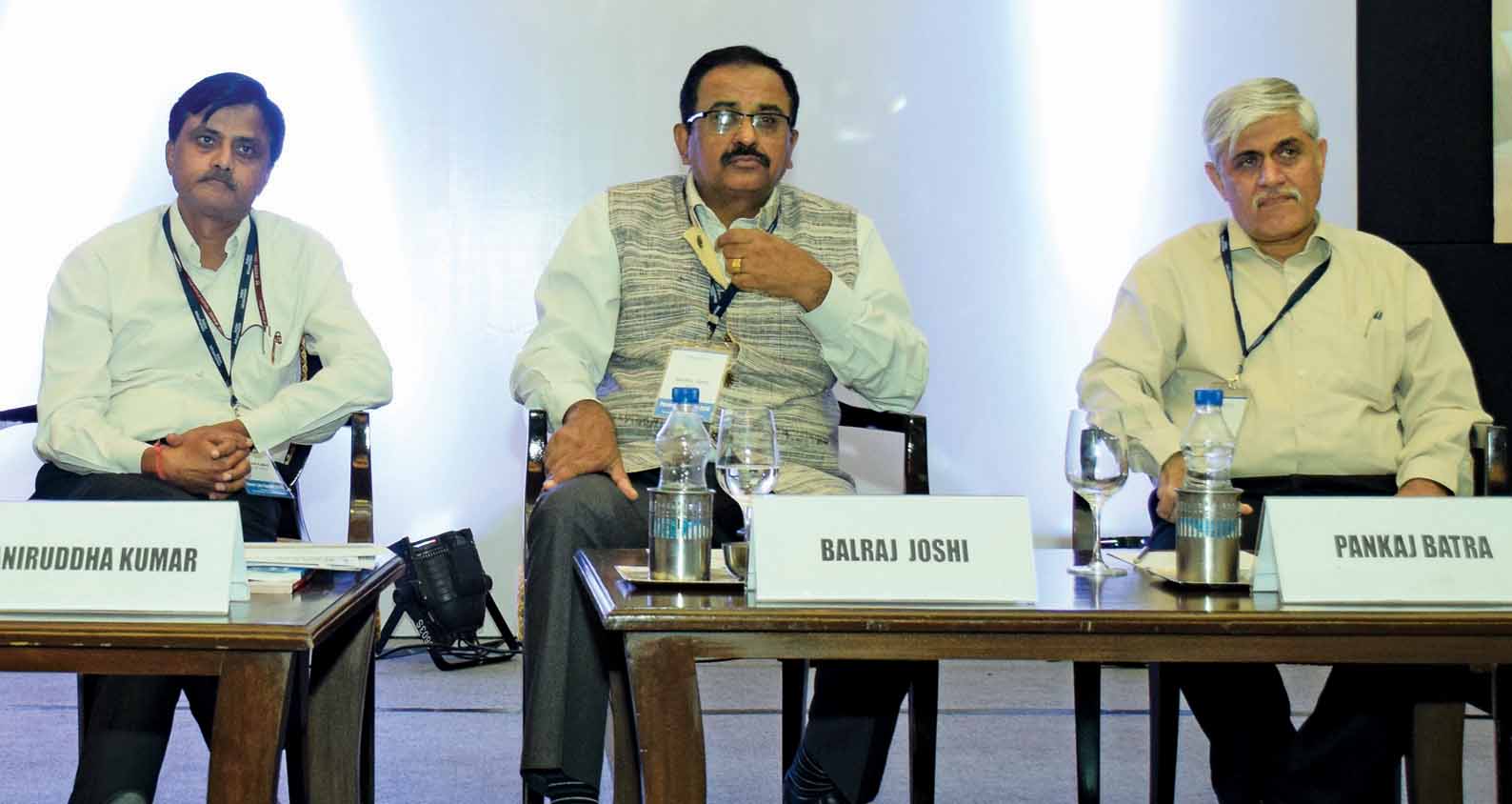 Role of hydro with renewables

The recently released Intergovernmental Panel on Climate Change (IPCC) report on climate change has once again warned against the adverse impact of global warming and has urged much faster and deeper cuts in global greenhouse gas emissions in order to keep the planet within 1.5°C of warming and avoid the most dangerous impacts of climate change. India, on its part, has been focusing on solar and has been able to achieve good progress. The total energy consumption is of the order of 1,300 BUs, of which almost 10 per cent is met through renewables. However, renewables, which are an infirm power source, create issues in grid stability. As discovered in the study conducted by the Ministry of Power and the Lawrence Berkeley Institute about two years ago, it is technically and economically feasible to integrate 175 GW of renewables and for greater capacity than that, battery storage will be required. The challenge is that batteries are hugely expensive – around Rs 15 million per MWh, speaking conservatively. Hence, battery storage cannot be the final solution. Hydro is a natural battery. There have been reservations about the concessions being extended to the solar power segment.

However, solar should not be seen as a competitor; rather it should be seen as a complementary source for the promotion of hydro. It is more expensive to generate hydropower as compared to coal-based power. Coal is certainly a cheaper technology today. However, hydro has the unique capability of being flexible, with peaking and ramping facilities making it suitable for complementing solar. The cost of hydropower can be fully neutralised by the cost of flexibisation and balancing. Each megawatt of hydro has the capability to reduce the battery requirement by 5.5 MW or so. Against the ideal thermal-hydro mix of 60:40, the ratio has changed to 87:13. We are now at a point where we have to think whether at 87:13 the grid can be sustained with the infusion of a large amount of renewable energy. This is an opportunity for hydro. However, for hydro to keep its relevance, it has to evolve in tune with the changing grid requirements and production of electricity. Pumped storage projects are a viable option too, which can store renewable energy.

The challenges in the hydropower segment are well known, and one of the biggest is the initial forecasts because of the surprises that lie in store in project development. In general, detailed project reports (DPRs) are not prepared with sincerity and exactness, leading to cost and time overruns, which has been detrimental to the health of the sector as a whole. Hence, we must unlearn some of these practices. Projects must be formulated in such a manner that there are no grey areas. That said, there are inherent limitations to investigation, given the difficult terrain and location of such projects. Hence, the use of state-of-the-art investigation techniques must be made. There is also a greater need for changing the tunnelling paradigm, as it plays a key role in project development. Hydro, per se, is an engine of development for those areas where the grid cannot generally reach. Hence, there is a need to monetise these benefits in a systematic manner at the appraisal stage itself and accordingly discount the final tariff. Even stressed power projects offer a good business case, given that a lot of work has been done and starting a greenfield project takes a lot of time. The clearances and land for such projects are in place, and so they should be definitely looked at.

For old hydropower projects, the tariffs are reasonable and hence power from them is being offtaken. However, for new projects, costs are a concern owing to the higher land acquisition costs, the costs of resettlement and rehabilitation (R&R), etc. That said, PSU projects are still cheaper than those that are given to the private sector because the latter still need to bid for project sites based on how much free power they can offer. Also, the tariff of a hydro plant is for 70 years and not 35 years because the civil structures, which comprise the major cost, last 100 years. The cost of the electromechanical equipment is small (30-40 per cent). If a plant can be renovated after 35 years, the entire plant can last for 70 years and avoid the R&R and land costs.

A study on baseload to peakload demand showed that only 20 per cent of generation should be peaking, which includes hydro and may include gas. Recently, an experiment was done along with NTPC and GAIL wherein the Dadri power plant was run as a peaking plant. The project was started in the afternoon and was shut down after the peak, and that worked fine. So it can be used as a peaking plant. Gas can be used as a peaking plant; however, there is a shortage of domestic gas. For LNG-based power plants, the per-unit cost is too high. Energy storage, which is now coming in, can be used as a peaking source; however, the costs are still on the higher side. The costs may come down radically (to around $100 per kWh) by 2030 or in the longer term. Meanwhile, in the ancillary services market, undisputed opportunities will be there for hydro if regulations are made quickly.  For nuclear, as per studies done by the Central Electricity Authority, it has been found that the earlier tariffs were very reasonable. It was the capital that was on the higher side for such plants. Nonetheless, their tariffs are very comparable with thermal power plants. However, setting up new nuclear power plants is becoming expensive, with costs as high as Rs 150 million to Rs 200 million per MW. A positive development, however, has been research on new nuclear reactors that are capable of delivering cheaper tariffs at Rs 6-Rs 7 per unit. Fast breeder reactors are being developed, which can reuse the fuel and, therefore, yield fuel cost savings. There are some small-sized nuclear power plants that are being tried out in some countries globally. These plants, of 4 MW, 10 MW, 20 MW and 50 MW, are expected to be more affordable, safer and easier to put up. This could be a viable option.

Many large hydro projects are yet to take off due to no clarity on who will bear the additional cost associated with infrastructure, flood water moderation, etc. Further, states are placing undue demands on hydro projects for free power, which is impacting development. Also, there has to be better coordination with the state governments as water is a state subject. Lastly, using advanced technologies is expensive and such costs need to be incentivised.

Hydro has a unique advantage of being flexible as well as offering black-start capabilities. Further, it helps lower the requirement for thermal power and, with greater wind and solar penetration in the grid, will also help reduce the battery requirement. What is needed is a proper market design. So far, all the power sale agreements for hydro have been based on its baseload capabilities and not much value has been assigned to its flexible nature. Hence, a more customised power sale agreement is required for hydro, which recognises its flexible nature. The market design should be such that the market itself incentivises peaking power without having any regulations for it.