Over the years, significant improvements have been made in transmission tower designs. Monopoles and multi-circuit towers, and micropile tower foundations are fast gaining traction. Advanced tower designs have reduced the right-of-way (RoW) requirement, minimised the visual impact, enabled faster execution and provided ease of installation. The new designs have also enabled the expansion of the transmission network to far-flung areas including forests and other difficult terrains. Further, the charging time of a transmission line has reduced to 15-18 months, from three to five years earlier. Overall, the innovations in the design and construction of transmission lines, towers and substations help achieve grid reliability and cost competitiveness with minimum environmental impact.

One of the most widely used transmission tower designs is the lattice type, which is mainly used for over 100 kV levels. These towers are self-supporting structures and can be built easily at inaccessible locations as the tower members are lightweight. The lattice guyed-V transmission towers widely used by transmission companies are easy and cheaper to install. The guyed transmission tower does not use concrete as the construction material and uses steel piles for angle towers. Therefore, these towers can be prefabricated and assembled at the desired site. The prefabricated structures are moved to the site and installation is done in the least possible time. The whole structure of the tower needs to be well fitted and bolted before shifting to the installation site. These towers are best suited for regions with extreme weather conditions, particularly snow-covered terrain and forests. One of the disadvantages of lattice towers is high RoW requirement. Lattice towers, especially guyed towers, require a large area and are, therefore, not preferred in dense urban areas or narrow corridors.

Monopoles or sleek towers typically consist of polygonal tubular sections with a tubular cross-arm arrangement for fixing tension and suspension clamps on it. The tubular structure can be in a single tubular form or an H-form. These towers offer the benefits of faster installation (as fewer components are required) and greater flexibility in design vis-à-vis lattice towers. Further, monopoles have a significant wind loading capacity and can withstand extreme weather conditions. Monopoles require much less space than lattice towers, thus significantly reducing the RoW requirement. Typically, each monopole tower requires only 33.26 square metres of land as compared to 245 square metres required for a conventional lattice-type tower. Notably, monopoles with tower heights beyond 40 metres can also be supported by a smaller foundation. Since they have a small footprint in terms of space, monopoles can be easily installed on the median of a road or a highway as well as at canals. These towers can be installed in thick forest areas to mitigate environmental effects/deforestation to some extent.

Multi-circuit towers are designed to carry three, four or even six circuits. Thus, they are able to transfer more power over a particular distance. They are designed with higher factored operating systems. The towers significantly reduce the aggregate RoW requirement of transmission lines. These have been successful in areas such as forests, thickly populated cities, and substation entry and exit corridors. However, multi-circuit towers still remain underutilised owing to concerns regarding the failure of the entire circuit, if a fault occurs in a single connection. 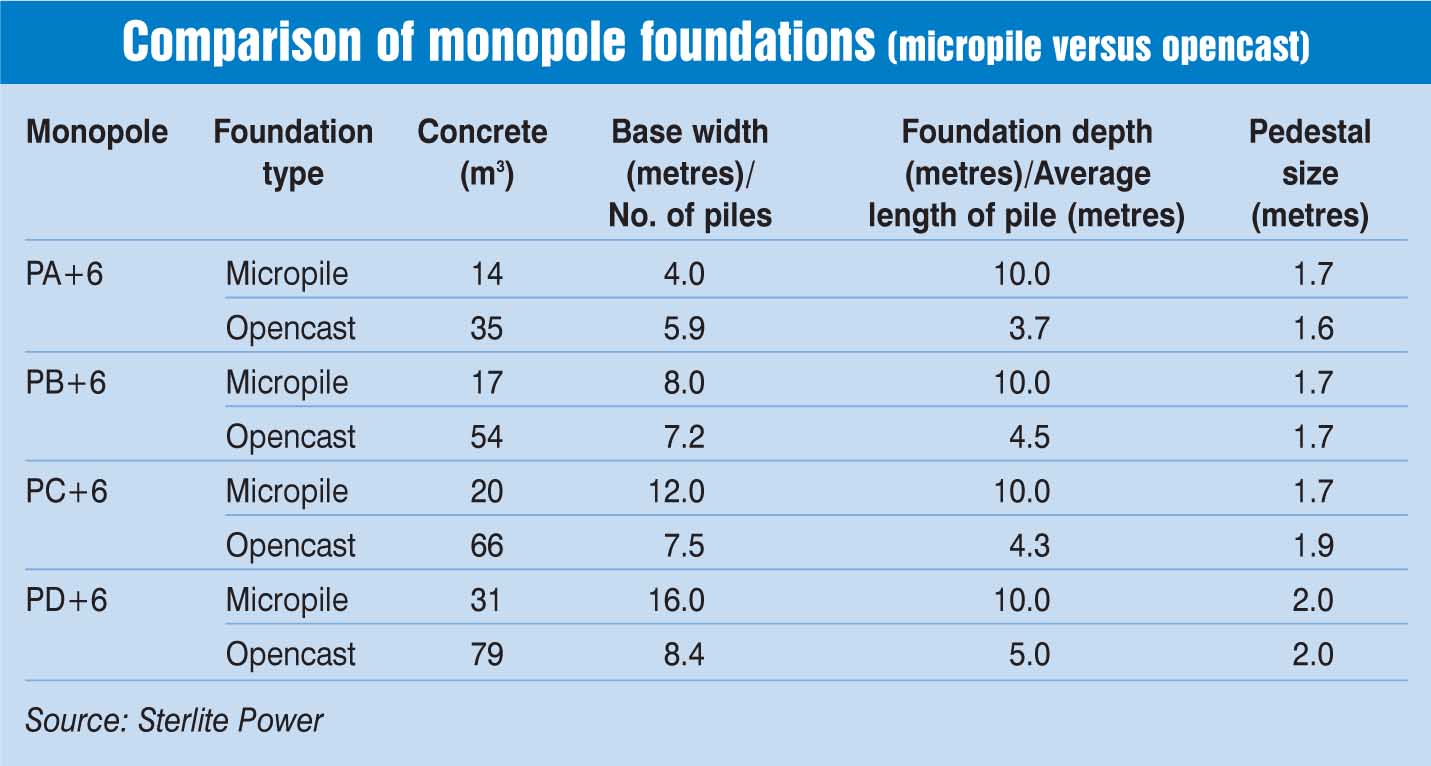 With regard to tower foundations, one of the key emerging technologies is micro-piling. Micropiles-based tower foundations comprise piles with a diameter smaller than 200-300 mm. The technology has gained popularity and wider acceptance since no-noise and low vibration is experienced in congested environments. Its installation is similar to bored piling (drilling method). Micropiles can be used in a wide range of geotechnical conditions, making them an ideal option for transmission projects in deserts, mountains and marine environments. Further, the specialised equipment and materials utilised for micropile foundation construction can be transported easily on helicopters.

To conclude, significant advancements have been made in tower designs and foundations to meet the transmission infrastructure requirements. These have helped in the expansion of the transmission network at a faster pace and in a cost-effective manner. However, for best results, it is essential to identify the right technology solution for a given transmission project taking into account the project terrain and RoW requirements, among other things.