The power trading segment has seen phenomenal growth and the country’s first power exchange, the Indian Energy Exchange (IEX), has been a key element of this growth journey. Launched in June 2008, the exchange now has over 6,300 participants and accounts for 97 per cent of the total volume traded in electricity at the two power exchanges in the country. Around 56.8 billion units (BUs) were transacted at the exchange in 2017-18, as against a mere 2 BUs in 2008-09.

IEX offers electricity trading products under the day-ahead market (DAM), the term-ahead market (TAM) and the energy certificates market. Under DAM, IEX offers trading of 96 separate electricity contracts of 15-minute-long blocks each for the next day, involving double-sided bidding with a uniform clearing price. Meanwhile, TAM covers a range of options for electricity trading for a duration of up to 11 days including intra-day, day-ahead contingency, daily and weekly contracts. In the certificates markets, IEX offers trading of renewable energy certificates (RECs) and energy saving certificates (ESCerts). IEX’s participants include 55 distributing companies, over 450 electricity generators, more than 3,900 open access consumers and 1,050 renewable energy generators. Among the open access beneficiaries, industries such as textiles accounted for the largest share (24 per cent), followed by metal (20 per cent) and automobile (12 per cent).

In the last five years, the traded volumes at IEX grew at a compound annual growth rate (CAGR) of 17 per cent to reach 56,843 MUs. On a year-on-year basis, the traded volumes witnessed an increase of 26 per cent in 2017-18. The daily average cleared volumes during 2017-18 stood at 126.8 MUs. The average market clearing price (MCP) during the year was Rs 3.26 per unit, an increase of 35 per cent over that in the previous year. This was mainly on account of the increase in buy bids and the decrease in sell bids on the exchange, caused by lower availability of coal supply.

With regard to the trading of RECs, in 2017-18, IEX traded 9.33 million RECs, reporting a volume growth of 102 per cent, mainly owing to an increase in renewable purchase obligation (RPO) compliance by the state discoms. Between 2013-14 and 2017-18, the RECs traded at the exchange grew at a CAGR of 63 per cent. IEX is also the platform for the trading of ESCerts under the Perform, Achieve and Trade scheme. Under the first cycle, 1.3 million ESCerts were traded at the exchange.

During the first six months of 2018-19, the company’s traded volumes stood at 28,584 MUs, witnessing an increase of 19 per cent over the corresponding period of the previous year. There was a significant increase of 33 per cent in the average MCP in the first half of 2018-19, largely due to inadequate coal availability. The average MCP during the period stood at Rs 3.98 per unit. Notably, in October 2018, the electricity market at IEX – DAM and TAM combined – traded the highest ever monthly volume of 7,125 MUs. Meanwhile, in the REC segment, 5,121 certificates were traded, a 325 per cent increase over the corresponding period in the previous year. 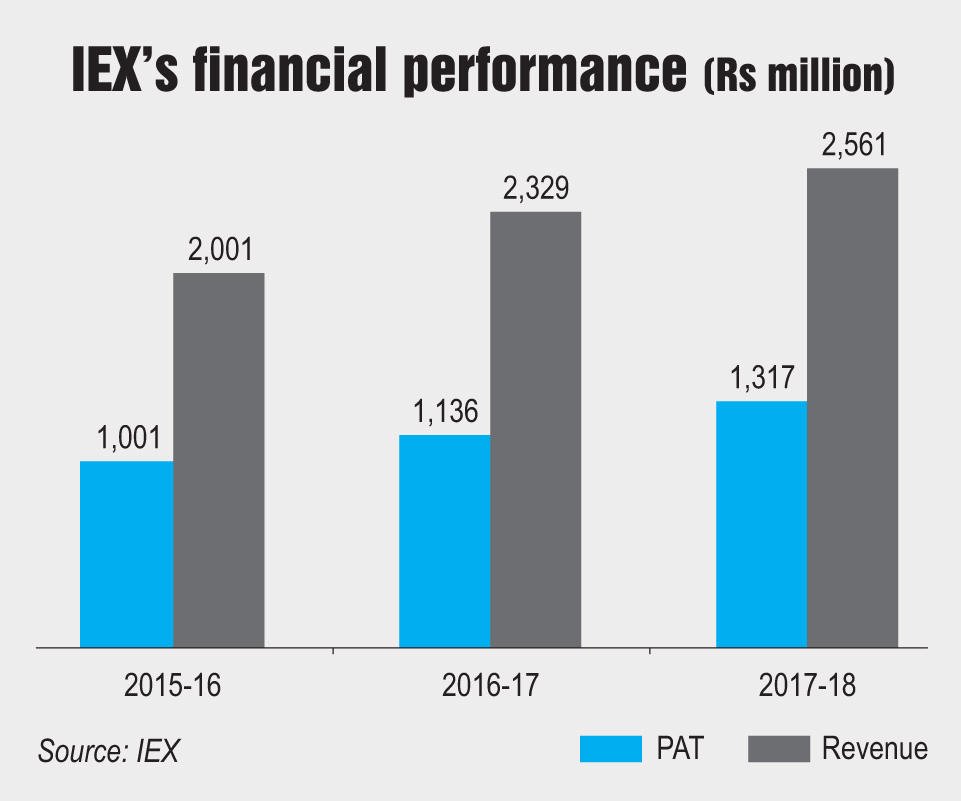 During the period 2013-14 to 2017-18, IEX’s total revenue grew at a CAGR of 10 per cent to reach Rs 2,561 million. Meanwhile, on a year-on-year basis, its total revenue grew at 10 per cent. The company’s profit after tax (PAT) stood at Rs 1,317 million, growing at a CAGR of 9 per cent during the same period. On a year-on-year basis, the company’s PAT grew at 16 per cent in 2017-18. A notable business highlight of the company was its listing on the Indian stock markets in October 2017. During the first six months of 2018-19 (up to September 2018), the company recorded a total revenue of Rs 1,494 million, witnessing a growth of up to 21 per cent on account of an increase in the volume of electricity and RECs traded. The company’s PAT stood at Rs 845 million, an increase of 32 per cent over the corresponding period of the previous year. 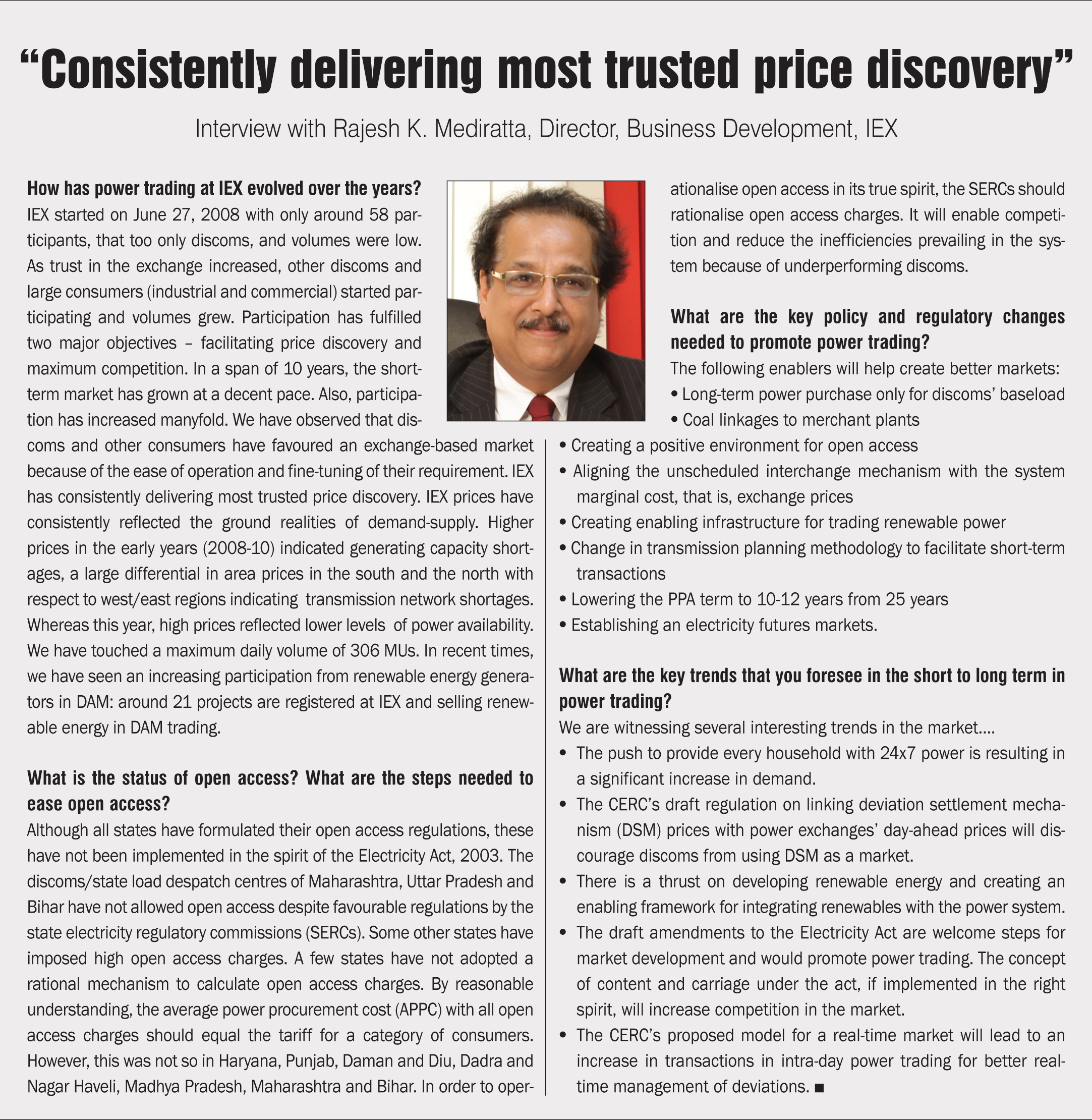 With only 4 per cent of India’s generated power transacted through the exchanges, as against 30 per cent in developed countries, there is enough headroom for IEX to expand operations. In addition to this, power demand is expected to increase in the coming years. IEX intends to embark on a higher growth trajectory with the introduction of new order types in DAM. These include contracts with longer duration electricity, contracts that allow consumers to change the quantum of power being traded across time blocks and contracts focused primarily on renewable energy producers. Meanwhile, in TAM, the company is soon likely to introduce the Smart Order Entry option, which would provide consumers information about the best volume and price. Apart from this, IEX plans to expand its coverage to cross-border markets. It is also mulling over widening its presence to alternative energy products like gas.

To conclude, IEX has achieved success in the short-term power trading market, registering a multi-fold increase in the volumes traded and in the number of participants. In the coming years, its growth story is expected to continue, primarily on the back of the growth in electricity demand and the expansion of short-term power transactions in the country.

The much-awaited trading of energy saving certificates (ESCerts), issued under the Perform, Achieve and Trade (PAT) I scheme, commenced on September 26, 2017. Against the backdrop of a sound regulatory and policy framework, ESCerts trading […]

By  Dr Atul Agrawal, Research Officer, CERC The Electricity Act, 2003 (EA 2003) empowered the Central Electricity Regulatory Commission (CERC) to promote the development of the power market in India. When the EA 2003 was […]

Limited Success: Open access yet to take off due to regulatory hurdles

Ever since the Electricity Act, 2003 was passed, the open access in power sector has been a frequently debated topic. Section 42 of the act allows non-discriminatory open access, but in reality, its implementation is […]