For the commercial and industrial (C&I) businesses, energy costs account for 30-40 per cent of their total operational expenditure. In order to meet their energy demand and hedge against the risk associated with high grid power tariffs, C&I consumers now have viable solutions such as captive and rental power. While coal has traditionally been the fuel of choice for the majority of industries setting up captive power plants, renewables, mainly solar power, have emerged as a viable option given their rapidly decreasing capital costs. They also help meet the renewable purchase obligations (RPOs).

Greater access to debt financing, emergence of the opex business model and a robust regulatory framework have further facilitated the adoption of captive solar power in the C&I segment. According to estimates by IEEFA, the C&I segment accounts for almost 75 per cent of the total rooftop solar installations in India with annual additional installations of 1.3-1.8 GW in the past few years.

Solar power is a preferred renewable energy source among C&I consumers due to its ease of implementation, versatility and negligible operating costs. In addition, the cost of solar energy has significantly reduced over the past several years, making it more accessible to C&I consumers. The state discoms continue to impose excessively high tariffs on C&I consumers, compared to residential and public sector consumers, in order to fund subsidies for agricultural and below poverty line consumers. Thus, large industries across all segments and commercial consumers including metro corporations, railways, airports, hotels and multinational corporations can generate substantial savings by meeting their power requirements through solar power-based captive, group captive and open access projects.

The grid power tariff for C&I consumers in many states is nearly Rs 10 per unit, while the levellised cost of power through rooftop solar (with a battery storage facility) is Rs 6-7 per unit delivering a clear cost advantage. In contrast, due to the high cost of fuel, the cost of power generated by diesel gensets hovers around Rs 20 per unit. Therefore, purchasing solar energy under third-party corporate power purchase agreements can result in significant savings for both captive and group captive power consumers.

In addition, companies are sourcing solar power as part of their green strategies to draw both investors and customers. Indian businesses are announcing net zero targets, and the trend is anticipated to gain more traction after the COP26 announcements. Major Indian companies have announced net zero targets, including Reliance Industries Limited (RIL), Tata Consultancy Services, HDFC Bank, Wipro, Infosys, Mahindra & Mahindra, JSW Energy, ITC, Adani, Dalmia Cement and Indian Railways. Indian Railways aims to achieve net zero emissions by 2030 while RIL plans to be net zero by 2035, and the Mahindra Group and Wipro have set 2040 as the target year.

Recently, in a key development, the Ministry of Power has issued the Electricity (Promoting Renewable Energy through Green Energy Open Access) Rules, 2022, which have been welcomed by the industry. With this regulation, consumers will be eligible for green energy open access if they have a contracted demand or sanctioned load of 100 kW or more.

The Ministry of New and Renewable Energy has circulated a draft cabinet note to mandate a green hydrogen consumption obligation for fertiliser and petroleum refining industries for the period 2023-24 to 2029-30. The move is likely to push these industries towards greater solar power uptake in operations. 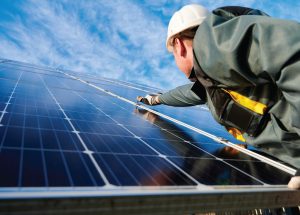 Also, the green day-ahead market and green term-ahead market have been introduced at the power exchanges. These segments provide competitive price signals, besides offering an opportunity to market participants to trade in solar power, in the most transparent, flexible, competitive and efficient manner. The market-based competitive prices provide another option to solar power generators to sell power and allow the obligated entities (distribution licensees, open access consumers and captive power consumers) to meet their RPO targets by directly buying solar power from the power exchanges.

Meanwhile, at the state level, the withdrawal of open access charge waivers by various governments has negatively impacted the market sentiment. For instance, Gujarat and Maharashtra withdrew waivers from open access consumers in 2020. In addition, in January 2020, Maharashtra proposed a grid support charge (GSC), a new levy for electricity consumers that have a sanctioned load above 10 kW for rooftop solar. The state discom sought a steep GSC of Rs 8.66 per unit, while the total handling cost of electricity is roughly about Re 0.70 per unit. Although the proposal did not get a go-ahead from the state regulator, such moves create much ambiguity amongst developers and consumers alike.

The C&I solar segment offers a wide range of opportunities with appealing business models for both customers and developers. As corporates announce their net zero targets in order to mitigate their climate change concerns, solar power adoption will see an uptick. Further, to achieve the target of meeting 50 per cent of India’s energy requirements through renewables by 2030, the states need to come forward and streamline their policy and regulatory frameworks to encourage greater solar power procurement by C&I consumers. Going forward, the segment can provide the much-needed impetus to the country’s capacity augmentation and decarbonisation efforts, and accelerate the energy transition.

Interview with Apraava Energy’s Naveen Munjal: “Sustainability is a part of our DNA”

Apraava Energy (formerly CLP India) envisions its energy portfolio doubling over the next three to four years. The company aims to expand its power transmission business and explore new opportunities in the distribution and retail […]

Interview with Suman Sharma: “India needs a mix of solutions”

Setting the Pace: MoP issues RPO and ESO trajectory till 2029-30

According to the Pareto principle, 80 per cent of consequences come fr­om 20 per cent of causes. In line wi­th this principle, only a few polici­es/ re­gulations have led to major changes in an industry. […]