A target of 15 per cent reduction in aggregate technical and commercial (AT&C) losses by March 2019 by state discoms has been a key barometer set by the Ujwal Discom Assurance Yojana (UDAY). The UDAY target seems to be on track for Haryana’s power distribution company, Dakshin Haryana Bijli Vitran Nigam Limited (DHBVNL), which has been able to steadily bring down losses from a level of 24 per cent in 2013-14 to 16 per cent in the last fiscal year.

Set up on July 1, 1999 after fu rther reorganisation of Haryana Vidyut Prasaran Nigam Limited (HVPNL), DHBVNL is one of the two state discoms of Haryana, the other being Uttar Haryana Bijli Vitran Nigam Limited (UHBVNL). DHBVNL caters to around 3.29 million consumers in 10 districts. In the last few years, initiatives such as network strengthening, replacement of old and ageing infrastructure under government programmes, procurement of smart meters, IT interventions to improve customer interface and DSM initiatives, have helped the utility deliver improved performance. In fact, under the annual ratings exercise conducted by the Power Finance Corporation in July 2018, the discom has been able to better its performance and achieve a B+ grade, depicting moderate operational and financial performance, as opposed to a B grade assigned in the previous rating round.

As of March 2018, the discom operated 268,088 distribution transformers (DTs). Between 2013-14 and 2017-18, the discom added 49,485 new DTs. As of March 2018, DHBVNL catered to over 3.29 million consumers. Its consumer mix is dominated by domestic consumers, who account for 78 per cent of its total consumer base. The agricultural (metered and unmetered connections) and non-domestic supply consumers account for an almost equal share of 9.52 per cent and 9.42 per cent respectively. Also, LT and high tension (HT) industries’ consumers account for 1.77 per cent.

Its distribution line losses have also considerably reduced from 23.66 per cent to 17.97 per cent in 2013-14 and 2017-18 respectively. Significantly, the discom has recorded close to 100 per cent collection efficiency in the last five years, which recorded 101.62 per cent in 2017-18. Meanwhile, the percentage of consumer complaints that were pending stood at 59.3 per cent (for October 2018), which was far beyond the national average of 6.8 per cent for the month. Further, there have been 31.6 times of power cuts in past months, as compared to 12 times of average power cuts in the month at the national level. 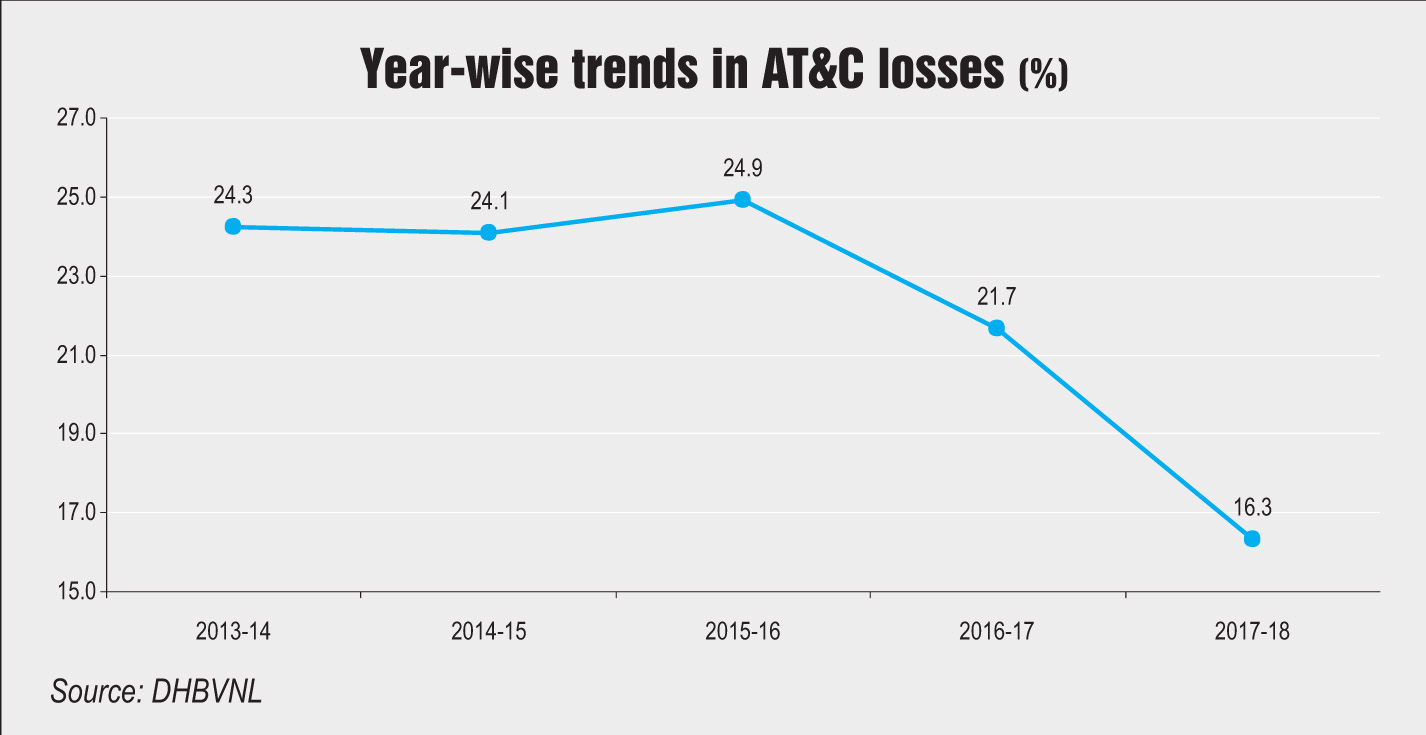 In the past one to two years, an analysis of the capex incurred by DHBVNL showed that the major areas where the company undertook works were investments in load growth schemes such as the creation and augmentation of 33 kV lines and substations, replacement of old infrastructure, bifurcation of 11 kV feeders, revamping of meter testing labs, among others. The company has also invested in the replacement of bare conductors with LT-AB cables in theft-prone areas as part of UDAY. Further, significant investments have also been made by the discom under the state’s power supply scheme, “Mhara Gaon Jagmag Gaon” for rural areas and feeder sanitisation for urban areas.

A number of measures have also been taken to reduce the DT failure rate, which has come down from 10.42 per cent in 2013-14 to 8.82 per cent in 2017-18. Measures such as routine checking, load balancing, regular checking of oil level, proper earthing of DTs, installation of proper size fuse at HT and LT side, maintaining of LT lines to ensure proper working of DTs, augmentation of overloaded DTs and mandatory visits to field by senior officers are being taken to reduce the damage rate of DTs.

To improve customer services, DHBVNL offers flexible and transparent options like e-billing, cash collection centres and online mode of payment for customers. It has set up various Bijli Suvidha Kendras (call centres), which have connectivity in rural areas and information facilitation counters/consumer helpline centres at the sub-divisional level. Further, the discom processes all new connection/load extension cases through the online portal. The discom has also implemented meter reading of consumers via hand-held devices. It is also implementing advanced metering infrastructure for the consumers above the 10 kW load. Besides these, DHBVNL has undertaken a number of initiatives for promoting demand side management. These include mandatory installation of 4-star rated motors and transformers, providing rebates on electricity bills to consumers who have installed solar water heaters as well as mandatory installation of solar photovoltaic power plants for a specified category of building/area. 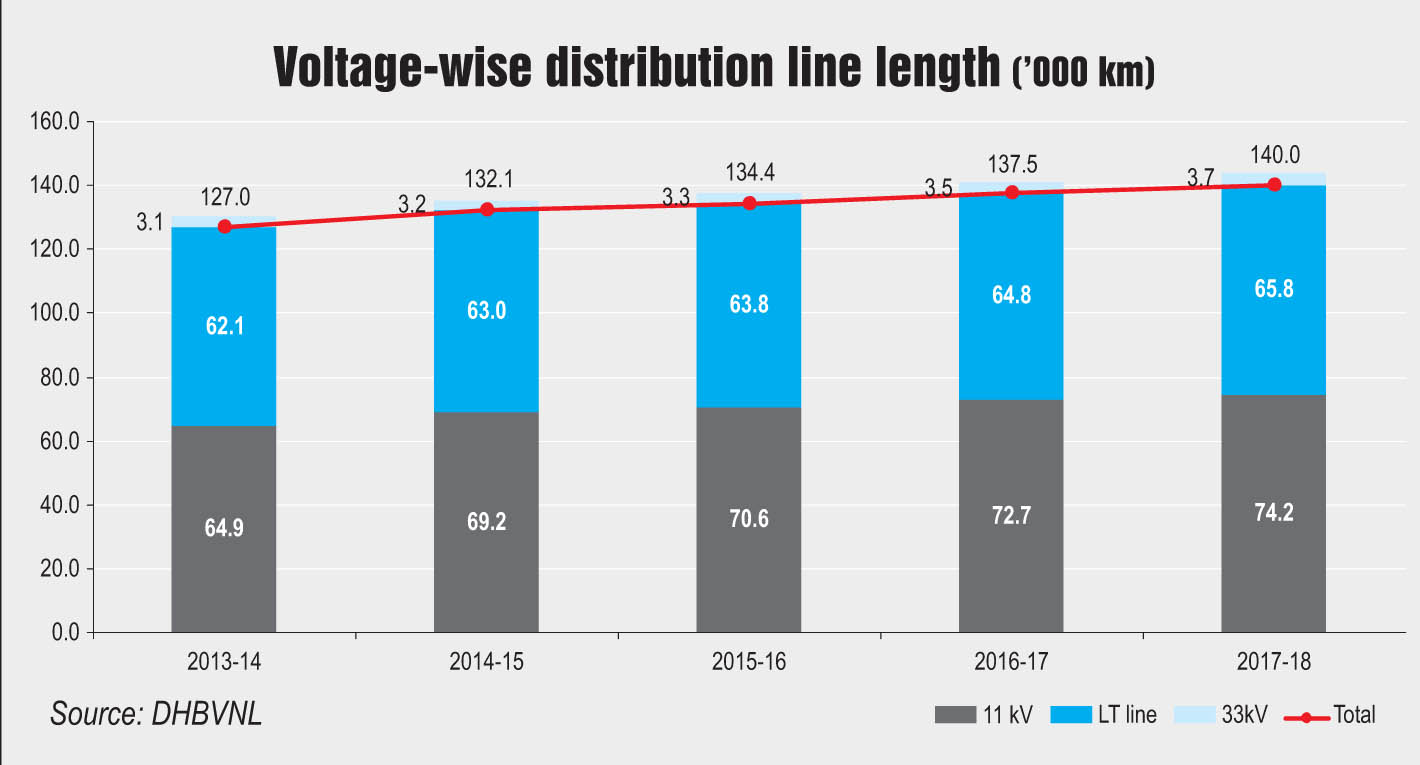 Going forward, the discom is planning to procure 500,000 single-phase meters and 140,000 three-phase meters for the replacement of defective meters and the release of new connections. The planned total capex for the procurement of these meters in 2018-19 is Rs 573.1 million. Further, significant capex would be undertaken for works in four smart cities (Gurugram, Karnal, Panchkula and Panipat). In fact, almost Rs 2.5 billion is proposed to be incurred for works on the smart city of Gurugram. Also, under UDAY, DHBVNL is planning to invest almost Rs 123 million for scaling up IT projects to non-Restructured Accelerated Power Development and Reforms Programme areas.

In sum, DHBVNL’s initiatives for significant network expansion, improvement in customer experience, reduction of AT&C losses, as well as improved metering and billing services, are expected to deliver results in the coming years.

The grid-connected gas-based power generation capacity currently stands at 25,329 MW, accounting for about 8 per cent of the total power capacity in the country. However, the potential of gas-based power plants remains vastly untapped. […]

Substations and switchgear play a vital role in providing reliable supply. As such, various government schemes have been formulated in India for network strengthening and modernisation in the transmission and distribution segment. The focus of […]

The Ujwal Discom Assurance Yojana (UDAY), launched in November 2015, has demonstrated promising results so far. Under the scheme, the discoms of participating states and union territories (UTs) reported a significant reduction of 48 per […]