The government  is committed to ensuring affordable electricity access to all. To this end, one of the key focus areas has been strengthening and modernising the grid. The government has implemented several policies and programmes over the past decade and a half to improve the performance and reliability of the distribution network.

The Accelerated Power Development and Reforms Programme (APDRP), launched in 2002-03, was the first major scheme aimed at strengthening and upgrading the sub-transmission and distribution system in the country, focusing on densely electrified urban and industrial areas. The scheme was continued in the Eleventh Plan as the Restructured APDRP (R-APDRP) and covered all urban areas and cities with a population of more than 30,000 (10,000 in the case of special category states including the north-eastern states, Sikkim, Jammu & Kashmir, Himachal Pradesh and Uttarakhand). While the programme did lead to improvements in the distribution network, resulting in a reduction in aggregate technical and commercial (AT&C) losses from 29.5 per cent in 2007-08 to 22.5 per cent in 2013-14, its achievements remained below the target levels.

Subsuming the R-APDRP as one of its components and extending its scope, the Ministry of Power (MoP) launched the Integrated Power Development Scheme (IPDS) in December 2014, with the aim of improving the quality and reliability of power supply in urban areas. The key components of the IPDS are strengthening the sub-transmission and distribution networks; metering of feeders, distribution transformers (DTs) and consumers; and IT-enablement of the distribution segment (R-APDRP). The number of towns covered under the scheme (over 3,500) is much higher than the number of towns covered under the R-APDRP (1,405). Parallel to the IPDS in urban areas is the Deendayal Upadhyaya Gram Jyoti Yojana (DDUGJY). Launched in end-2014, it focuses on strengthening and augmenting the sub-transmission and distribution infrastructure in rural areas, including metering at the DT, feeder and consumer levels. It also provides for feeder segregation and electrification of unelectrified villages and households. A look at the achievements so far and the current status of these initiatives…

Apart from the completion of ongoing works of the R-APDRP, the scheme envisages a number of other activities such as the construction of new substations; augmentation of existing substations through the installation of higher capacity/

additional power transformers; erection of new lines and augmentation of existing lines for reorientation/realignment; installation of new DTs and augmentation of existing DTs; installation of capacitors; laying of underground cables in densely populated areas; deployment of static meters for feeders, DTs and all unmetered consumer connections; replacement of faulty meters; and the installation of prepaid and smart meters in government establishments, and advanced metering infrastructure and smart meters in towns where supervisory control and data acquisition (SCADA) is being implemented under the R-APDRP.

The IPDS has an outlay of Rs 326.12 billion, in addition to the outlay of Rs 440.11 billion for the R-APDRP carried forward to the scheme. Of this, Rs 253.54 billion will be covered through gross budgetary support from the central government. As of May 20, 2017, 493 projects with an aggregate cost of Rs 258.98 billion (approved government grant of Rs 161.78 billion) have been sanctioned. These sanctions have been made for 538 circles across 31 states/union territories (UTs). Of these, tenders for projects worth Rs 224.96 billion have been floated and projects totalling Rs 169.23 billion (about 75 per cent of the total sanctioned amount) have already been awarded. The aggregate grant approved by the central government for these projects is Rs 160.49 billion, though only Rs 26.49 billion has been released till date, accounting for 10 per cent of the total cost of these projects.

As per the initial scheme guidelines, IT-enablement was taken up in the 1,405 R-APDRP towns only. However, for IT-enablement of distribution across all urban areas, the MoP approved guidelines on project formulation for IT and enterprise resource planning in non-R-APDRP towns (about 2,600) under the IPDS in May 2016. As a part of Phase II of IT-enablement under the scheme, projects aggregating Rs 1.67 billion have been approved across six states – Andhra Pradesh, Chhattisgarh, Gujarat, Kerala, Telangana and Uttarakhand. Of the total project cost, Rs 1.02 billion is to be provided by the government as budgetary support. However, no grant has been released so far.

Till date, 1,346 of the 1,405 towns have been declared “go live”.  The remaining 59 towns to “go live” are located in Jammu & Kashmir, Odisha, Tamil Nadu, Nagaland, Arunachal Pradesh, Puducherry and Mizoram. They are expected to “go live” by March 2018. Further, 20 out of 21 data centres,  19 out of 21 disaster recovery centres and 40 out of 46 customer care centres have been commissioned under the scheme. Another activity under the IPDS is online monitoring of urban feeders. It empowers utilities with information about high loss pockets without any manual intervention. As of date, 32,238 urban feeders have been IT-enabled, of which 25,818 feeders are already communicating data to the utilities.

The MoP launched a mobile app, called the Urban Jyoti Abhiyan, in June 2016, which provides data regarding the performance of distribution utilities based on IPDS parameters, thereby enabling project monitoring. The government has also launched an all-India short code, “1912”, to register consumer complaints and report theft. Of the 62 discoms, 52 have already adopted this code. Utilities that are yet to initiate the short code include four public discoms (Meghalaya Energy Distribution Corporation Limited, the Power and Electricity Department of Mizoram, the Department of Power of Nagaland and the Department of Power of Arunachal Pradesh), and four private discoms (BSES Rajdhani, BSES Yamuna, Tata Power Delhi Distribution Limited and the Western Electricity Supply Company of Odisha). 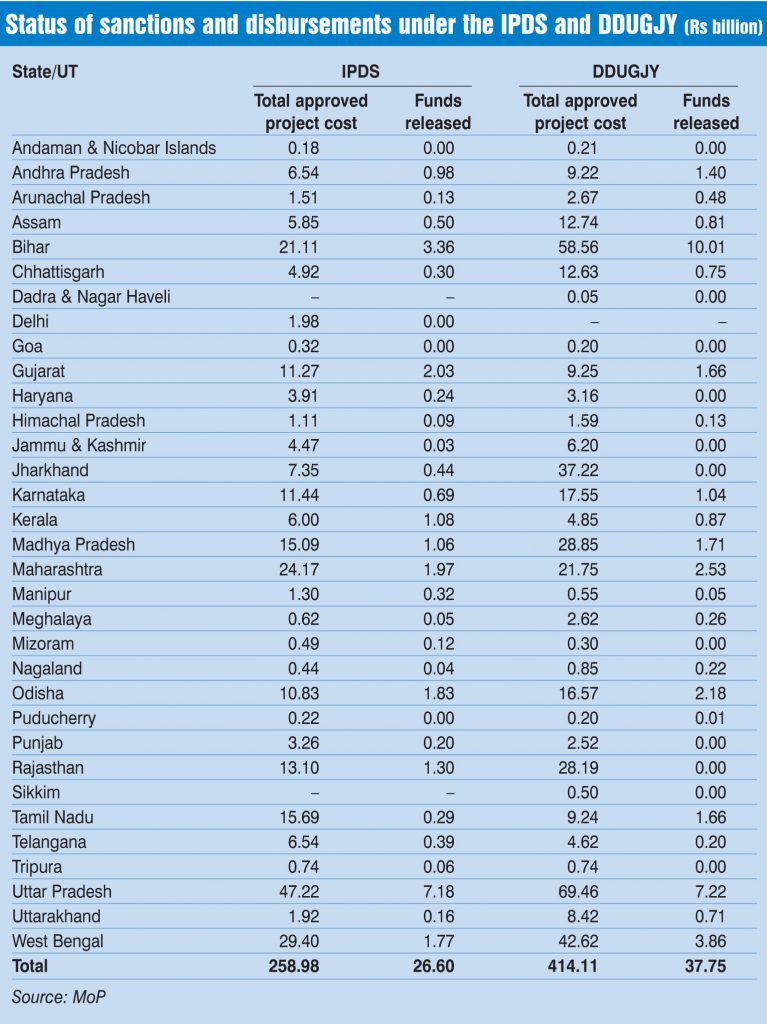 While the IPDS is focused on urban areas, the DDUGJY is centred on improving distribution and electrification in rural areas. The scheme includes the Rajiv Gandhi Grameen Vidyutikaran Yojana (RGGVY) as a key component of the rural electrification initiative. Its other key components include the strengthening of sub-transmission and distribution networks, and the separation of agricultural and non-agricultural feeders. The total outlay approved under the scheme is about Rs 430.33 billion (excluding the RGGVY outlay carried forward). It includes a budgetary support of Rs 334.53 billion. As of April 30, 2017, 636 projects totalling Rs 414.1 billion (about 96 per cent of the total planned outlay) were sanctioned. Of these, Rs 155.7 billion worth of projects pertain to feeder segregation and Rs 96.2 billion to system strengthening. The funds released so far amount to Rs 37.75 billion, only about 9 per cent of the sanctioned cost of the projects. As far as village electrification is concerned, 13,523 villages have already been successfully electrified under the scheme. The remaining 3,985 villages are targeted to be electrified by March 2018.

The implementation of the above-mentioned programmes has led to considerable improvements in the distribution segment. However, the achievements have remained much below the targets. AT&C losses have come down to about 20 per cent, which is still way higher than the 15 per cent target. Several reasons including the lack of experience at the

utility level, delay in the transfer of funds, and unavailability of equipment providers have contributed to the slow progress of the schemes. The targets themselves were probably too high against the timelines set to achieve them.

Going ahead, the experience from previous years, a more transparent communication and monitoring system, and the alignment of activities under various schemes are likely to support the overall goal of providing quality power to all. The schemes have also received a push from the Ujwal Discom Assurance Yojana (UDAY), which has set strict loss reduction targets for discoms. The UDAY guidelines also provide for the allocation of a higher share of funding from the two schemes on adhering to the AT&C loss reduction targets. Further, the combined allocation for the IPDS and DDUGJY for the upgradation of distribution infrastructure has been increased to Rs 106 billion for 2017-18, which is more than 35 per cent higher than the allocation of Rs 79 billion in 2016-17. While the segment is equipped to achieve the objectives, the actual implementation of the schemes vis-à-vis the plans will remain crucial in determining their real success.

Energy Accounting: Metering, billing and collection initiatives across the country

The power distribution segment is plagued with issues of high aggregate technical and commercial (AT&C) lo­ss­es, as well as financial losses, which can be controlled to quite an extent by following adequate metering, billing and […]

Despite having significant potential, hydropower development in India has been rather slow. Against an estimated potential of 148.7 GW, the installed capacity is only 44.48 GW (projects of 25 MW and above capacity) and projects […]

The central government has undertaken various programmes and initiatives for implementing smart metering across the country. In August 2022, the prime minister launched the Revamped Distribution Sector Scheme (RDSS), with an overall outlay of Rs […]