In a significant policy development this month that came as a big relief to thermal power plant (TPP) owners, the government has issued a notification stating that investments in the installation of emission control technologies will be considered for a pass-through in tariffs.

In a letter addressed to the Central Electricity Regulatory Commission (CERC), the power ministry stated that the Ministry of Environment, Forest and Climate Change’s notification requiring compliance with the environmental norms by TPPs issued in December 2015 is of the nature of a change in law event.

“In view of the nature of the cost involved in the implementation of the revised standards of emission and the provisions of power purchase agreement (PPA), there is a need to develop an appropriate regulatory framework specifying the mechanism or enabling guidelines for providing regulatory certainty to TPPs for the recovery of such additional costs through tariff. It is important to ensure the implementation of the revised standards of emissions by TPPs for controlling the pollution level in the larger public interest. The respective TPPs may approach the appropriate commission for the approval of additional capital expenditure and compensation for additional costs on account of this change in law event,” states the power ministry in its letter to the CERC.

Given that about 650 units, aggregating 196.97 GW, are required to meet the new emission limits, the pass-through notification has huge implications for TPPs. Industry watchers see the move as a big positive, as the resolution of the issue of cost recovery had been dragging on for very long, making power producers delay the implementation of the new norms. “This comes as a huge relief to the industry and would benefit private power producers. The issue has been raised by the industry for the past two years,” says Ashok Khurana, director general, Association of Power Producers. “The clarity on pass-through of such additional cost is a positive development and would enable TPPs to comply with the revised emission norms,” agrees Sabyasachi Majumdar, senior vice president, ICRA Limited.

The ministry’s letter, however, states that the change in law event will not be applicable to PPAs of thermal projects whose tariff is determined under Section 63 of the Electricity Act, 2003, having a bid deadline on or after December 7, 2015. Also, this excludes TPPs where such a requirement for pollution control systems was mandated under the environmental clearance of the plants, or envisaged before the notification of the amendment rules.

The existing plants were given two years, that is, up to December 2017, to comply with these revised standards, and plants commissioned after January 1, 2017 were required to ensure compliance from the commencement of operations. The short timeline for the implementation of the new norms had come as a major shock to power plant developers. However, after discussions with the environment ministry and the regional power committees, a more practical plan was formulated by the power ministry and the Central Electricity Authority (CEA), with TPPs given a two to five-year period, up to 2022, to adhere to the new standards.

The CEA has put in place a roadmap for these plants to install emission control technologies from 2018 to 2022. For FGD installation by 2022, to be used for SOx emission control, the CEA has identified around 161.52 GW of capacity (414 units), with around nine units to be retrofitted in 2018-19 and the remaining 405 units from 2020 onwards. Similarly, for meeting the particulate matter norms, around 231 units comprising 65.92 GW of capacity have been identified as per the CEA and will require retrofitting with ESPs, with only one unit to be retrofitted by 2018 and the remaining by 2022.

Of the various emission technologies to be deployed, the bulk of the investments would be required for meeting SOx emission control norms. Of the total capex required to meet the norms, around 60-70 per cent is expected to be incurred on SOx reduction technologies, as per industry estimates. “The cost of FGD equipment is around Rs 4 million per MW to Rs 4.5 million per MW,” notes Khurana.

According to Majumdar, the impact of capex on the generation cost is expected to go up to 22 paise per unit. “The additional capital investment by TPPs is estimated to increase the capital cost of generation by 15 paise to 22 paise per unit, depending on the capex incurred. This is also likely to result in additional operation and maintenance (O&M) costs pertaining to new equipment installed for complying with the revised emission norms.”

NTPC Limited will see the largest deployment of FGD, with plans to install FGD systems in around 160 units (66.2 GW) and is expected to be a major beneficiary of the pass-through. It has already commissioned an FGD in its Vindhyachal Unit 13 plant of 500 MW capacity. Recently, equipment major Bharat Heavy Electricals Limited was given an order to install a FGD system at NTPC’s 2×490 MW Dadri plant, at a value of Rs 5,600 million, which works out to around Rs 5.7 million per MW. NTPC has opted for the dry sorbent injection technology system for this order. Interestingly, another tender for the installation of a wet-FGD system awarded to GE for Phase I of NTPC’s super thermal power project in Telangana with a capacity of 2×800 MW is valued at Rs 3,090 million, which works out to be less than Rs 2 million per MW.

For private power producers too, the pass-through would bring in major relief. Investment in GVK Power’s Goindwal Sahib plant is estimated to be Rs 8 billion for such an equipment. For Vedanta’s Talwandi Sabo Limited, the estimated capital expenditure on the installation of FGD works out to Rs 25 billion (with the actual operating expenditure expected to be in addition to this).

Developers say that what adds to the costs associated with the installation of FGD is the number of other inputs required for this technology such as extra water, disposal of polluted water, sourcing of good quality limestone, installation of chimneys, disposal of gypsum and long shutdown periods of units. 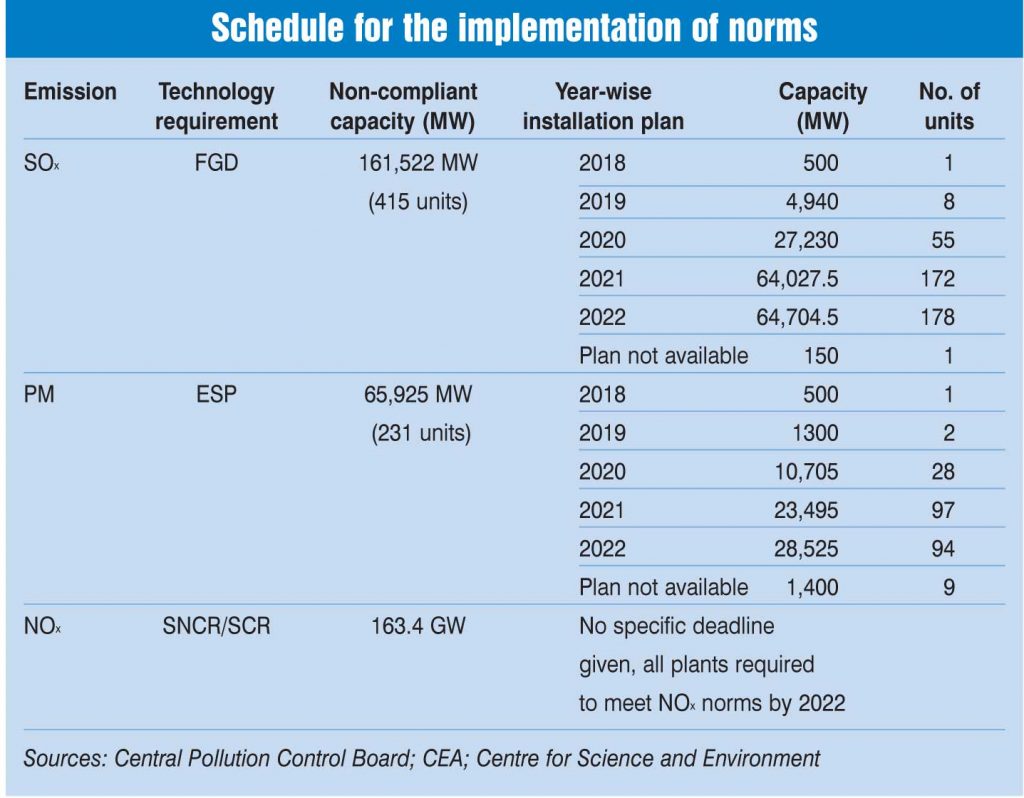 Impact of the move

Many developers have been seeking relief from regulatory commissions before going ahead with such large-scale investments in emission control technologies and have filed petitions with the central and state regulatory commissions. With greater clarity, now TPP owners can raise financing for such investments as the tariff impact of these investments can be passed on via modifications to the existing PPAs of utilities. That said, while the pass-through is a relief for generators, it is expected to lead to higher costs for end consumers.

Another concern related to the higher variable cost due to the installation of pollution control equipment is that such generators would be disadvantaged in merit order despatch (MOD). However, the power ministry has advised that to ensure that the plants remain competitive, the increased variable costs may be excluded from the tariff for MOD. Also, while scheduling, the units should be categorised into two parts and the units that are environmentally compliant should be scheduled first. While considering MOD, it has also been proposed that until all the units are environmentally compliant, the additional variable cost due to FGD should not be taken into account. 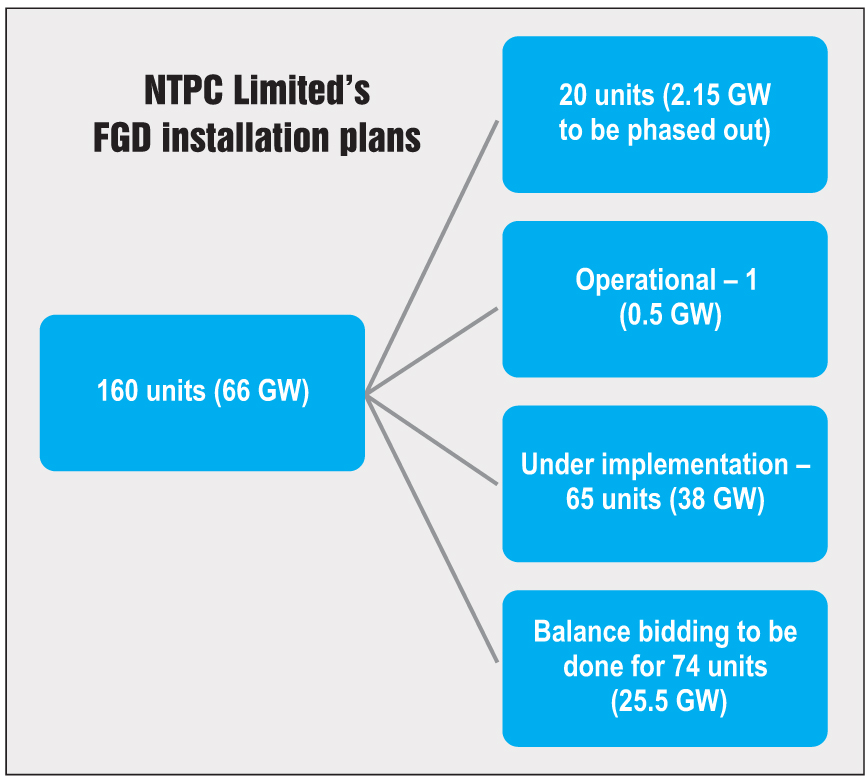 For now, the power ministry has asked the central commission to develop an appropriate regulatory mechanism for projects under its purview to address the impact on tariff and certainty in cost recovery on account of additional capital and operational cost under the concluded long-term and medium-term PPAs. Meanwhile, the CERC has begun looking at this issue while working on framing the tariff regulations for the period 2019-24. The CEA is working on the benchmark costs of such installations.

There are a few concerns that still linger over technology preparedness as well as raw material management. “One of the key challenges pertains to meeting the NOx emission norms, as there are currently no proven technologies for NOx emission control. Technologies like SCR and SNCR are not yet proven to meet the NOx emission norms under Indian conditions. NTPC has, recently studied and tested indigenous NOx emission control technologies for one of its TPPs. Another challenge regarding the provision and disposal of limestone, one of the critical raw materials for FGD systems,” says Khurana. Moreover, developers continue to remain on a sticky wicket in terms of financing. “Apart from the operating issues, the timely implementation of these norms is linked to the ability of project developers to secure debt and equity funding for the additional capital investment. This is especially challenging in the private sector, given that many IPPs are already facing stressed finances. Moreover, many of these projects lack long-term PPAs, which is a key constraining factor in raising funding,” notes Majumdar.

Despite these concerns, going forward, it is expected that costs would come down as the country’s emission control market is expected to experience a major boom, as both global and domestic vendors seek to capture a growing share of the market. Further, as indigenous capacities ramp up, costs could come down as well, which should ease the pressure for gencos.

To sum up, the power ministry’s efforts at resolving the cost recovery concerns would help galvanise investments in emission control technology and help the sector’s transition towards cleaner energy. 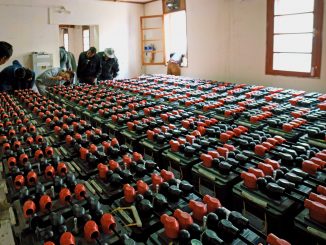 Towards Viability
Stakeholder views on CERC paper on storage systems

April 2, 2017
With the increasing share of renewable energy in total generation arises the need to optimise generation and [...]
More