In September 2018, the Power System Corporation of India (POSOCO) published a consultation paper on “Security Constrained Economic Dispatch (SCED) of ISGS (interstate generating station) Pan India”. Through this paper, it aims to find an optimal solution for minimising the total production costs of all thermal ISGSs without disturbing grid security, and honouring the existing generation scheduling procedure.

India adopted the currently prevailing decentralised, coordinated multilateral scheduling model (which is a “deemed delivered physically” model) in the mid-1990s. The regional and state load despatch centres (RLDCs/SLDCs), as mandated by the Electricity Act, 2003, are responsible for the scheduling and despatch of electricity within their region based on power purchase contracts. The state utilities schedule generation sources, both from within the state as well as from ISGSs, based on their demand forecast. Multiple beneficiaries across regions are allocated shares in an ISGS. This has led to a complex matrix involving allocations to 29 states and seven union territories (as beneficiaries) from about 150 ISGSs.

Within states, optimisation is taking place at the local level as a merit order is followed for scheduling and despatch. There is scope for optimisation at the interstate level as well, wherein the fragmented leftover power in cheaper thermal ISGSs that remain unrequisitioned by the states/beneficiaries can also be despatched. This has to be achieved by duly factoring in the technical minimum, maximum generation and transmission constraints, etc. The proposed SCED process will create a thin centralised layer of optimisation over the existing decentralised scheduling system. The potential average savings are estimated at Rs 24 million, which account for about 1.3 per cent of the total average production cost.

Reserve regulation ancillary services (RRAS), a form of slow tertiary reserve control operational since April 2016, has been a key enabler of the economic despatch exercise as the capacity under the ambit of RRAS is considered for optimisation. The paper also discusses a methodology for maintaining secondary reserves at the regional level. It recommends certain necessary regulatory changes for SCED implementation.

In this context, the Central Electricity Regulatory Commission (CERC) has recently published two related discussion papers on redesigning the real-time market (RTM) and ancillary services mechanism to help stakeholders manage their energy portfolio closer to real time, and ensure co-optimisation of energy and ancillary services for the optimal utilisation of resources at the least cost. It may take some time for the CERC-proposed frameworks to be fully operational. For achieving immediate savings, POSOCO has come out with the SCED proposal, which is expected to act as a precursor to the CERC’s proposal for a market-based ancillary services mechanism.

Power Line presents the key highlights of the POSOCO paper…

About 55 GW of thermal ISGSs, under the RRAS mechanism, that account for 62 per cent of the total thermal ISGSs and 25 per cent of the country’s thermal capacity, have been considered for optimisation. SCED optimisation is carried out after the unit commitment has taken place at the day-ahead level for the minimisation of the variable cost or fuel charges. It is in line with the Ministry of Power’s policy objective of flexibility in generation and scheduling of thermal power stations to achieve overall reduction in production costs.

Optimisation will bring a national-level merit order among ISGSs, introduce flexibility in scheduling, aid in maintenance of reserves at the regional level and help reduce the number of start-stops for generators. The paper recommends an algorithm-based scientific approach using established optimisation techniques. The security constraints can be modelled in such an optimisation algorithm. Further, schedules for states and the underlying settlement systems remain undisturbed.

A pool-based settlement mechanism has been suggested under SCED. This will help in sharing the gains of enhanced system reliability among all load serving entities.

A linear programming model has been used to arrive at the optimal despatch. POSOCO developed a software program for this purpose which provided real-time generator schedules and grid data as inputs to the model. It used solver add-in in Microsoft Excel for deriving optimal schedules, and sample-checked the results derived through the solver using general algebraic modelling system (GAMS) language and powerful commercial solvers like IBM CPLEX accessed through GAMS. This model was in operation at the National Load Despatch Centre (NLDC) for six months from September 2017 to March 2018. POSOCO analysed the data for 57 thermal ISGSs aggregating 55 GW (see Table). The potential savings amounted to Rs 24 million on average. This may be a slight overestimation of savings as compensation for loss in the heat rate and increase in auxiliary consumption is not factored in. The savings potential, although small, was high during the off-peak period and also when the production cost was low as cheaper units could be used to meet low demand. Flexible power plants provide higher savings potential if the scope for optimisation spans the entire day.

The four key functions for SCED are equality constraint, available transmission capability (ATC), technical minimum and ramp rate. Equality constraint refers to the strict condition that the sum of the optimal schedules of all regions for each of the 96 15-minute time blocks must be equal to the sum of the schedules in the base case. The base case itself is the combined generation requisition by all states to meet a part of the forecasted demand through their entitlement portfolio across central ISGSs. Like the base case schedules, the optimal schedules must follow ATC limits determined considering network security constraints. The CERC has fixed the technical minimum of thermal ISGC units at 55 per cent maximum continuous rating (MCR) loading. The maximum that a plant can be scheduled is the declared capability on the bar of that plant. Each plant has its ramp-up and ramp-down limits. The ramp rate (MW per 15 minutes) and variable cost data are collected from the regional power committees.

To achieve the estimated savings, POSOCO has proposed a mechanism similar to the existing CERC ancillary service regulations. Under the proposed mechanism, the RLDCs can proceed with the regular scheduling process. An optimisation software at the NLDC/RLDC will produce the optimal schedule for every generator based on the ramp rate, variable cost, generator limits and transmission margin. These software results can be utilised by the NLDC/RLDC to centrally advise every generator for up and down regulation. A dead band of 10 MW can be introduced for incremental changes over the existing schedule to avoid changes for small potential savings. The paper suggests some changes in the existing framework to implement energy and reserve optimisation in the Indian scenario. These are as follows: 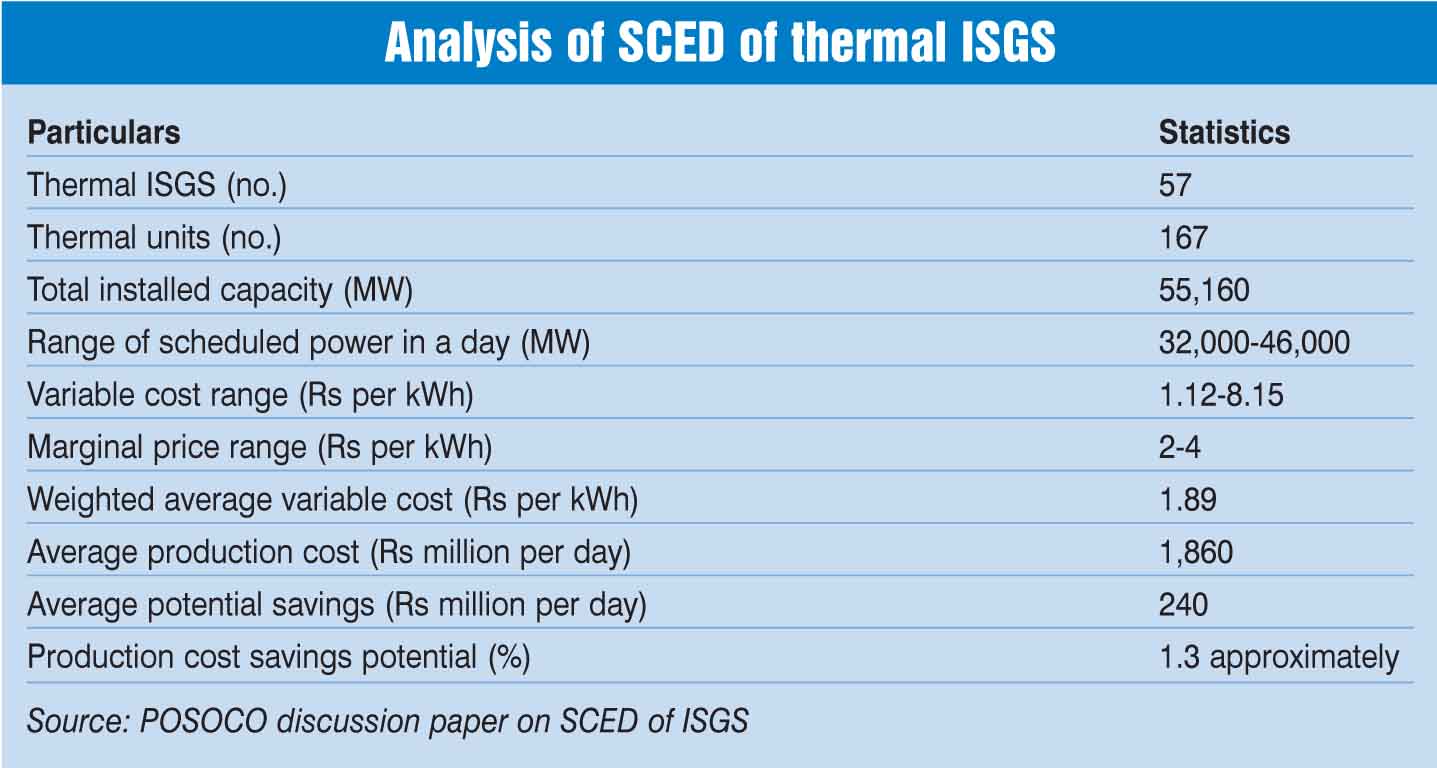 Gate closure: The concept of gate

closure must be introduced for bringing in more certainty of despatch, especially in terms of reserve requirements and activation. The flexibility of revising the schedules will be with market participants prior to gate closure. Thereafter, the system operators will take over and prepare for the predetermined delivery period.

Spinning and non-spinning reserves: The majority of spinning or hot reserves which are on bar are used up during peak hours. Non-spinning or cold reserves comprising non-synchronised available generating units are brought on bar under such circumstances. Such cold reserves (thermal units) need to be kept running at technical minimum levels during other hours of the day as the time required for such units to come on bar is high (six to eight hours). This means they are out of merit generation despatch for maintaining adequate reserves for reliable and secure grid operation (as required by the CERC roadmap to operationalise spinning reserves dated October 2015). To enforce the roadmap, the CERC must come out with regulations for maintaining reserves and calling cold reserves into service as and when needed.

Ramping requirements: As per the Central Electricity Authority technical standards, generating units must have a minimum loading or unloading rate of 3 per cent per minute above the control load (that is 50 per cent MCR). The IEGC requires a minimum of 1 per cent ramp rate to be provided by generators. At present, the ramp rates declared by RRAS providers are less than 1 per cent. However, tests conducted at the Dadri Stage II thermal station to check its ramping capability indicate that the 3 per cent norm is achievable.

Interregional scheduling: For optimisation, the existing scheduling methodology, as prescribed in the scheduling and despatch code of the IEGC, has to be changed from corridor-wise path-specific scheduling to net-injection/net-drawal for each region. Optimisation may have an impact on interregional corridor schedules. The change in method would help in reversing the heuristic distribution of scheduled flows across regions.

National deviation settlement mechanism (DSM) pool: Currently, deviations from schedules are settled for each corridor between regions through regional DSM pools. Once the new interregional scheduling is implemented, a national DSM pool will have to be created, whereby all regional DSM pools will interact with the national pool only. This would help streamline the settlement process by reducing multiple interpool transactions.

Accounting and settlement: In the existing mechanism, generators get their variable charges based on the schedules issued by the concerned RLDC. For settling incremental changes in the existing schedules post optimisation, the paper suggests a settlement method:

The proposed optimisation mechanism utilises variable charges declared by the generator upfront. Alternatively, generators can submit bids for consideration in the optimisation process. This will allow the participation of interstate independent power producers, and merchant thermal power plants in optimisation.

Optimisation and RTM: The two efforts are complementary. A real-time or hour-ahead market is under deliberation. If implemented, it would provide an opportunity to market participants to balance their portfolios closer to the time of operation. There may still be space for optimising the schedules. Further, optimisation will determine the required reserve quantum. 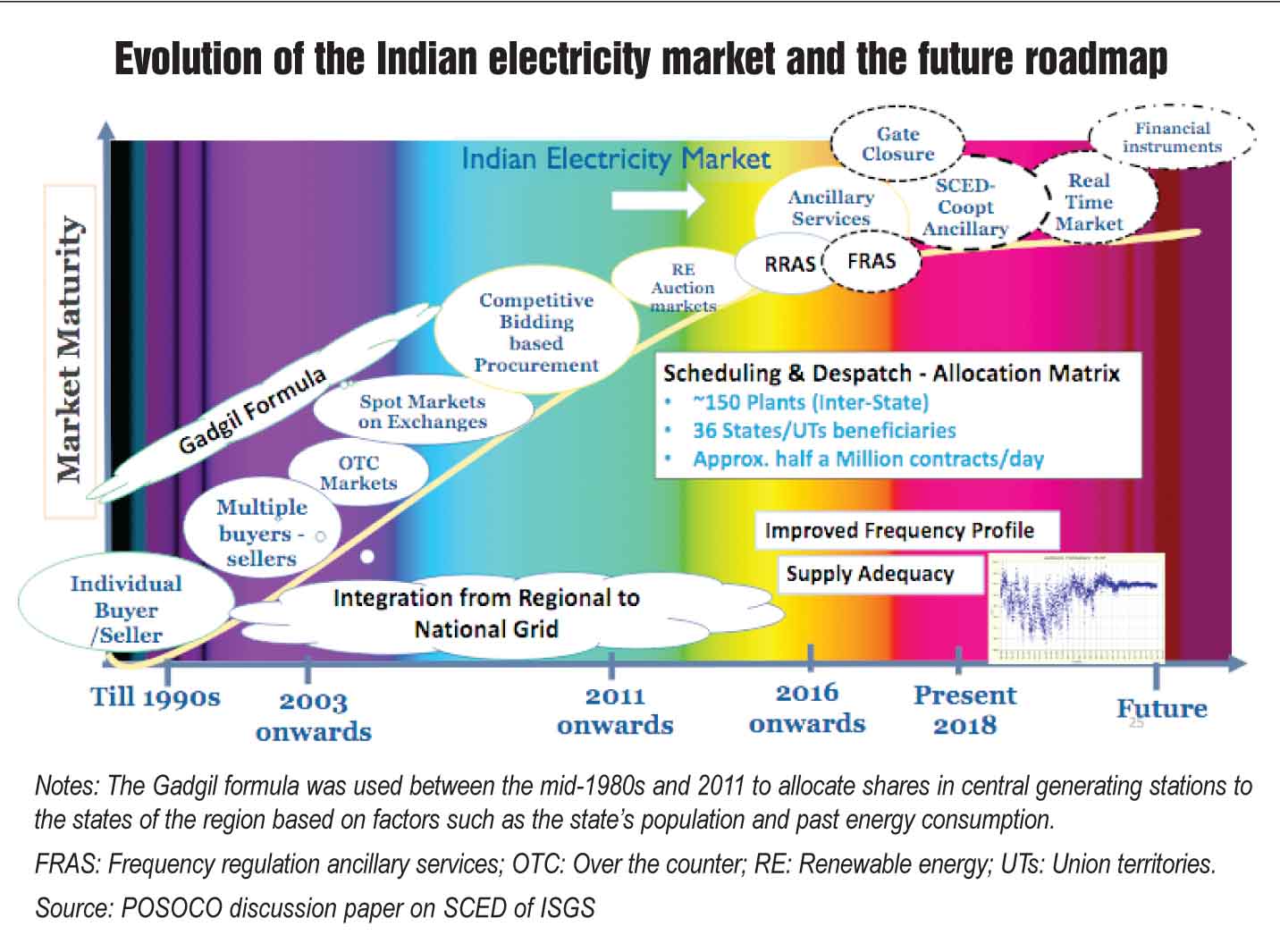 POSOCO has also developed a mathematical program for maintaining secondary reserves at the regional level as required by the CERC reserve roadmap. Region-wise secondary reserves corresponding to the largest unit outage in each region were earmarked by the CERC order to be operationalised through automatic generation control. The POSOCO paper takes a holistic approach to optimisation and addresses the unit commitment aspect with respect to maintaining regional secondary reserves. The cost of keeping regional spinning reserves is minimal when there is a margin available in the declared capacity on bar. However, if the reserve constraint is not satisfied, the next cheapest unit must be brought on bar and generation from the cheapest unit has to be reduced. The cost of maintaining the reserve is the differential of the variable cost of the units plus the start-up cost. The idea is to economically bring the units on bar from reserve shutdown in case of shortfall of reserves.

The Indian power system has evolved over the past few years. It has come a long way from being power deficit to power surplus position where it is able to maintain reserves. The importance of reserves is underlined by the fact that load shedding is no longer an option for discoms. This may become legally binding from March 2019 and contravention may lead to penalties. Optimisation of the base schedules, secondary and tertiary reserves, and SCED will streamline the merit order. Eventually, the optimisation process for all of the above can be combined into a single programme. For now, the immediate implementation of SCED will help in the last-mile mop-up of the available cheap power in the system at an all-India level without disturbing the sovereignty of the states under the decentralised mechanism. The power sector has exciting times ahead with new concepts such as gate closure, RTM, SCED and co-optimisation of ancillary services expected to be introduced progressively over the next one year or so. 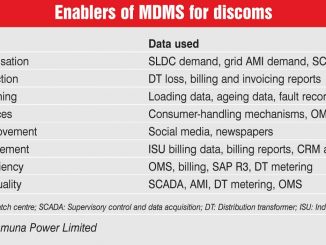 Data Management
Increasing use of MDMS to improve utility operations 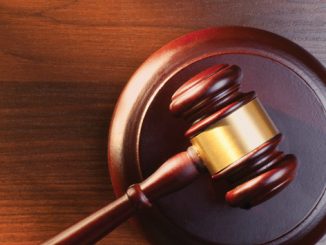 November 4, 2018
Power quality refers to both the extent of deviation or distortion in pure supply waveform and continuity [...]
More