The protection of power systems and equipment from external weather phenomenon such as lightning is critical for their smooth functioning and the safety of operating personnel. Lightning strikes can cause immense damage to electronic equipment. Overvoltage damage caused by spikes and transients due to lightning, utility switching, isolation arcing, electrical motor cycling, or any other sudden change in the electrical power flow in alternating current (AC) lines is responsible for a third of all outages. Within a fraction of a second, transient overvoltages can reach up to 6,000 volts in a well insulated 230/400 volt power distribution system, which is over eight times the level that can be sustained by electronic items such as computers, data communication networks, plant sensors, critical medical equipment and programmable logic controllers. Any damage to these systems can severely impact domestic consumers as well as critical industrial, commercial and government establishments. It is, therefore, imperative for utilities and consumers to deploy surge protection devices (SPDs) and earthing systems to ensure continuity in business operations.

Effects of lightning on power systems

The effects of lightning can be classified into two types – direct and indirect. The direct effects include melting of the structure, fire hazards and explosion while indirect effects include transient overvoltages caused due to the conduction or induction effects of lightning. When lightning strikes the ground or any object close to a distribution/transmission line, the electromagnetic fields propagate in all directions. The inductive and capacitive coupling of such electromagnetic fields with conducting wires induces voltage impulses in the power system. These lightning induced overvoltages may cause a sudden shock to a system that is not designed for higher voltages. The sharp rise in voltage moves across the conductor, creating gaps in insulation and gradually breaking down the insulation, which causes a deep, prolonged type of damage to the equipment associated with burning.

Statistically, the indirect effects of lightning strikes and overvoltages cause greater damage to the equipment than the direct effects. However, the probability of a direct lightning strike in a given region increases with line height and therefore HT lines are more susceptible to direct strikes than LT lines. At times, lightning strikes on the ground cause an increase in the earth potential (also known as feedback from earth), which can spread to the electrical installations. Besides, overvoltages can be caused by electromagnetic induction of lightning discharge current, which affects all conductors in its field.

A detailed analysis of the risks of lightning should be carried out before installing equipment for lightning protection. The areas with high ground flash density need to take greater protection measures for electrical installations. Ground flash density refers to the number of lightning strikes to the ground, over a period of one year, averaged by the country’s landmass per square km. The regions with the highest lightning activity include Central Africa, South America, southern states of North America, and Southeast Asia.

Certain isolated systems are also used to provide protection against lightning. These systems use a network of air terminals, down-conductors and grounding electrodes wherein the air terminals and down-conductors are mounted on insulators to protect the structure. By ensuring an appropriate separation distance between the lightning protection system and the structure, the lightning energy can be contained without posing a risk of flashing to the structure. At times, special high voltage XLPE insulated cables/down conductors are used for creating this separation distance.

Earthing is an essential element in protection against lightning. The Central Electricity Authority (CEA) defines earthing as the electrical connection between non-energised conducting parts and the general mass of earth by an earthing device. As part of the earthing arrangement, all the exposed conductive parts must be connected and the system must be capable of discharging the lightning current, avoiding a voltage rise in the earthing system itself and the surrounding ground. The earth electrode must have a low frequency resistance value and all the earthing components must both offer a low resistance to earth and have excellent corrosion resistance, as they will be buried in the ground for many years.

The protection of internal networks and equipment against transient overvoltages is based on the use of SPDs, which obstruct the flow of energy through the equipment by giving it a special route to earth. SPDs prevent the occurrence of destructive overvoltages on equipment by limiting them to levels that are compatible with the equipment. These devices also minimise the effects of induction due to the fields generated by the flow of lightning currents.

Standard IEC (EN) 62305 describes the general principles of overall protection of structures and internal equipment against lightning. It also gives information specific to the assessment of lightning risks, taking into account the foreseeable and acceptable damage, economic requirements, physical damage connected with the structures, and damage to the electrical or electronic equipment within the structure.

The CEA drafts relevant regulations pertaining to the safety and protection of electrical installations. Some of the key regulations with provisions relating to lightning protection and earthing include Technical Standards for Construction of Electrical Plants and Electric Lines Regulations, 2010 (as amended) and Measures Relating to Safety and Electric Supply Regulations, 2018 (Safety Regulations). Recently, amendments were issued to the Safety Regulations with respect to setting up of electric vehicle (EV) charging stations. As per the amendments, suitable lightning protection systems are to be provided for EV charging stations as per IS/IEC 62305, and earthing of all EV charging stations will be based on the TN system as per IS 732.

The protection of power and electronic systems is critical for utilities and consumers alike. Their uninterrupted functioning hinges on appropriate operations and maintenance practices as well as timely replacement of ageing earthing and lightning protection equipment. Besides, utilities need to adopt newer technologies and advanced SPDs in order to provide total protection against risks posed by lightning. 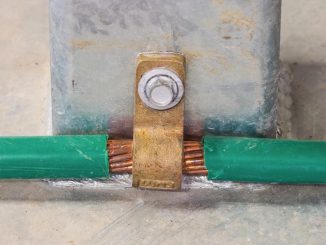 November 18, 2018
Earthing plays a critical role in the proper and safe operation of any generation, transmission and distribution [...]
More