Spain generated about 33.7 per cent of its power from renewables in 2017, with wind being the prime contributor. Across Europe, it ranked sixth in renewable power generation. According to Spanish electricity grid operator Red Eléctrica de España (REE), the country’s renewable energy generation as a share of total power generation remained above the average values of several European countries.

The country has set a target of generating 20 per cent of all its power needs from renewables by 2020. An additional 0.8 per cent is available for other European Union (EU) countries under cooperation mechanisms, which are part of the revised EU Renewable Energy Directive, 2009, taking the total to 20.8 per cent. This increase in renewable energy generation will require significant intervention in the Spanish power grid to ensure desirable penetration levels. Further, renewable energy integration poses serious challenges and entails a high degree of complexity in the country’s electricity system due to the limited capacity of electricity interconnection with the rest of continental Europe and the demand patterns, which vary based on the time of year, the day of week, the temperature, etc. Another notable aspect is the difference in power consumption during peak and off-peak hours. To address these issues, REE intends to invest Euro 7 billion in transmission infrastructure between 2020 and 2025. This is nearly twice the amount invested in the country’s power grid in recent years. In addition, the utility is set to invest Euro 434 million in the development of the Canary Islands’ power grid to integrate upcoming wind projects. Apart from renewable energy integration, REE will increase Spain’s electricity interconnection capacity, which is currently far short of EU targets.

The transmission network, operated and developed by REE, comprises the peninsular network (the Spanish mainland) and the extra-peninsular network (the Balearic and Canary Islands). The development of the transmission grid continued in 2017, during which time 147 km of new line length and 108 new substation bays were commissioned, and 1,210 MVA of transformer capacity was added. At end 2017, Spain’s transmission network comprised about 43,998 km of line length and 86,654 MVA of transformer capacity at voltage levels ranging from 132 kV to 400 kV.

During 2013-17, Spain’s transmission line length grew at a compound annual growth rate (CAGR) of 1.08 per cent, from 42,140 km in 2013 to 43,998 km in 2017. Its transformer capacity increased at a CAGR of 1.61 per cent, from 81,289 MVA to 86,654 MVA during the same period. Spain has 18 high-voltage cross-border links with its neighbouring countries – 10 with Portugal, seven with France and one with Morocco. Several noteworthy initiatives were undertaken to increase renewable energy integration. A key move among these was the commissioning of the Arkale phase shifter, which is a part of the recently commissioned Arkale (Oyarzun, Guipúzcoa)–Argia (France) link. 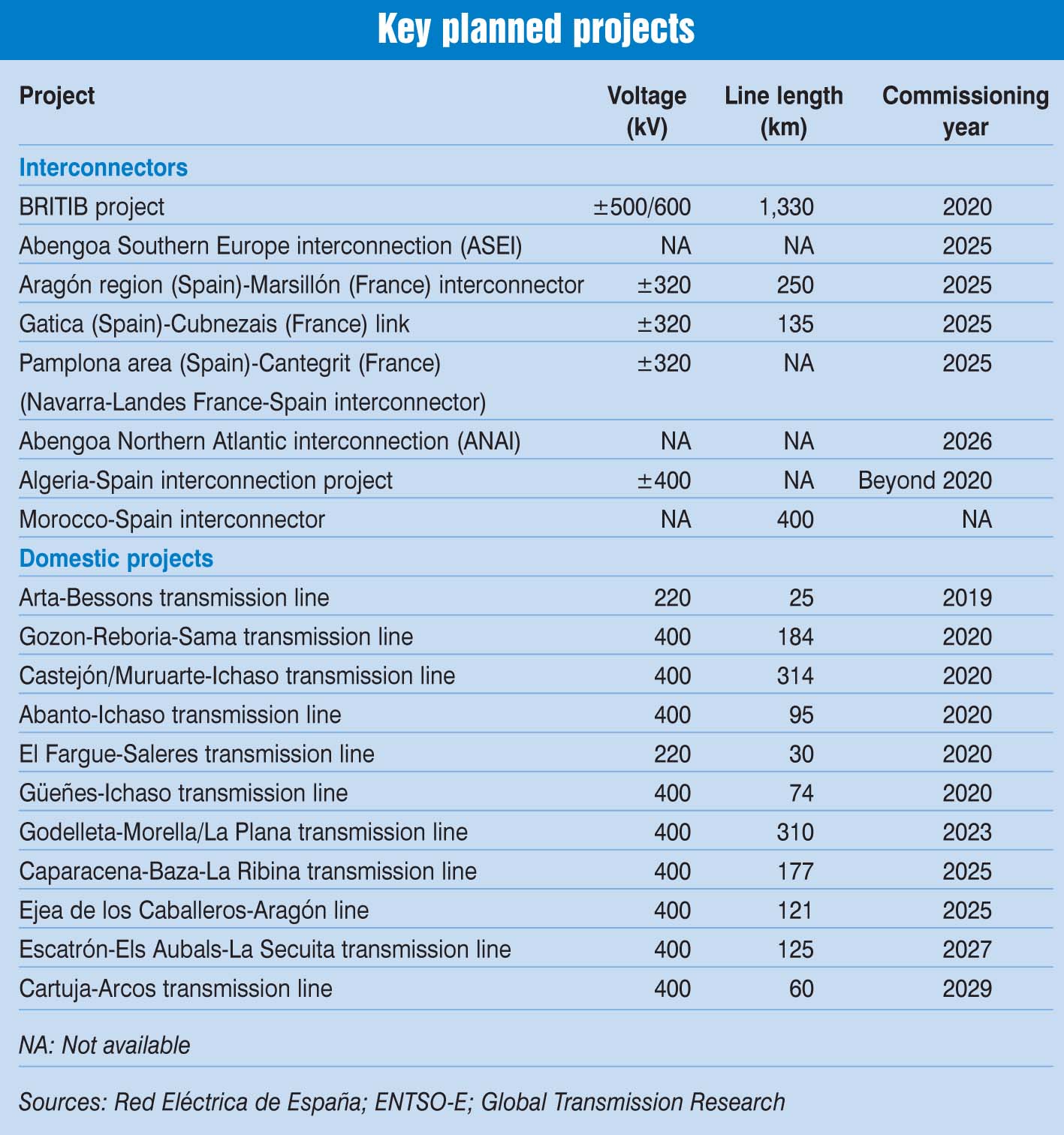 Grid expansion and the strengthening of interconnections will allow REE to better manage the high levels of renewable energy production by facilitating the export of electricity to other power systems. REE plans to invest Euro 7 billion in transmission infrastructure between 2020 and 2025. The goal is to prevent blackouts while integrating intermittent renewable energy (wind and solar) into the network and phasing out traditional technologies (thermal and nuclear) from the energy mix.

According to Global Transmission Research, around 2,817 km of new lines, 18,700 MVA of transformer capacity and 92 new substations are expected to be added to the national grid. According to the Five-Year Annual Transmission Capability Statement for 2017–21, REE is implementing several high-voltage projects, including domestic and cross-border links. Currently, 10 interconnections are at various stages of development, with the majority expected to be commissioned post 2020.

A key electricity interconnection project that Spain is involved in is the 1,330 km, 500/600 kV BRITIB project. It entails the construction of a high-voltage direct current (HVDC) undersea link connecting Indian Queens (UK), Cordemais (France) and Gatica (Spain). The Euro 2,450 million project is supported by the European Commission (EC), which had also partially funded the feasibility study. It is expected to be commissioned by 2020. Another cross-border project is the 250 km, 400 kV HVDC Terga (Algeria)–Litoral de Almeria (Spain) submarine interconnection link. This project, worth Euro 1,200 million, is a part of the larger Maghreb–Europe Corridor project and is expected to be commissioned in 2025. Further, Spain is trying to boost its cross-border capacity with France. It is undertaking several projects with France, including the 135 km long, 320 HVDC Gatica (Spain)–Cubnezais (France) link, and the 320 kV HVDC Pamplona area (Spain)-Cantegrit (France) link.

Some of the other cross-border projects are the Abengoa Northern Atlantic Interconnection (ANAI) linking Spain, France and the UK; the Abengoa Southern Europe Interconnection (ASEI) connecting Spain, France and Italy; and the 400 km Morocco–Spain interconnector. In parallel, REE is focusing on strengthening the domestic grid by undertaking several high-voltage projects such as the 314 km, 400 kV Castejón/Muruarte-Ichaso line; the 310 km, 400 kV Godelleta–Morella/La Plana line; the 184 km, 400 kV Gozon-Reboria-Sama line; the 125 km, 400 kV Escatrón-Els Aubals-La Secuita line; and the 177 km, 400 kV Caparacena-Baza-La Ribina line.

Around Euro 434 million is planned to be invested in the Canary Islands’ power grid for connecting wind energy projects, creating electricity interconnections between islands and improving network assets. In Gran Canaria, the electricity grid operator has expanded the 66 kV Aldea Blanca substation. It is currently constructing the 66 kV Arinaga and Agüimes substations and their associated connection lines, at an investment of Euro 32.7 million. In Tenerife, Euro 80.5 million will be invested to expand the 66 kV Tagoro substation, and construct the 220/66 kV El Porís and Abona substations and their associated lines. The 66 kV Callejones substation in Lanzarote has been built, and the projects for the 132 kV Tías–Playa Blanca line and the 132/66 kV Tías and Playa Blanca substations have been planned. The three projects entail a total investment of Euro 71.1 million. Additionally, REE plans to invest Euro 217.7 million in Fuerteventura to construct the 132 kV Jares substation and its connection line. An investment of Euro 32.1 million will be made on improving the electricity interconnection between Lanzarote and Fuerteventura to enable the creation of a single electricity system, which will improve the network’s capacity to safely integrate new renewable energy generation.

Spain is gearing up to handle greater amounts of renewable energy as well as increased cross-border market transactions. The timely creation of a well-integrated and modern energy infrastructure is crucial for ensuring the country’s energy transition as envisaged. To this end, REE is preparing the country’s national grid through the augmentation as well as rebuilding of ageing assets. This is reflected in the robust project pipeline as well as the commitment to bigger investments for improved grid connectivity, reliability and efficiency. Moreover, the recent improvement in the financial conditions and credit quality of Spain is expected to support this growth.

In sum, while REE’s network expansion plans for energy transition and stronger cross-border ties are a welcome step, the timely execution of projects and sourcing of funds are crucial for achieving results.