The distribution transformer industry in the country has grown significantly over the years, with the increase in power generation capacity and the focus on 24×7 power supply leading to significant capacity additions in the transmission and distribution (T&D) network. Various government initiatives aimed at T&D infrastructure improvements have also been key market drivers. These include the Deendayal Upadhyaya Gram Jyoti Yojana, the Integrated Power Development Scheme and the Ujwal Discom Assurance Yojana. Besides this, significant strides have been made on the technology front. Conventional oil-filled transformers are increasingly being replaced with dry-type transformers and advanced smart transformers.

The distribution transformer industry is dominated by unorganised micro, small and medium enterprise units across the country. They mainly supply to the state utilities. Besides, there are a few large-scale manufacturing units that have a pan-Indian presence. These units are also engaged in the export of transformers.

Another technology solution that is fast gaining traction is smart transformers, which form an integral part of digital substations and can independently regulate voltage. These transformers are equipped with intelligent electronic devices, and intelligent monitoring and diagnostic features. Besides, they provide web and supervisory control and data acquisition interfaces. The demand for mobile transformers is rising. These are deployed during emergency situations to provide interim grid connection or temporary power supply. These are delivered to the customer/utility in the form of ready-to-connect, complete assemblies and therefore have shorter installation and commissioning time. Some of the other emerging transformer types are 3D triangular wound core transformers (reduce magnet resistance and current and no-load losses), aluminium-based winding transformers (better thermal coefficient of expansion) and solid transformers (allow bidirectional power flow).

Classification based on transformer core 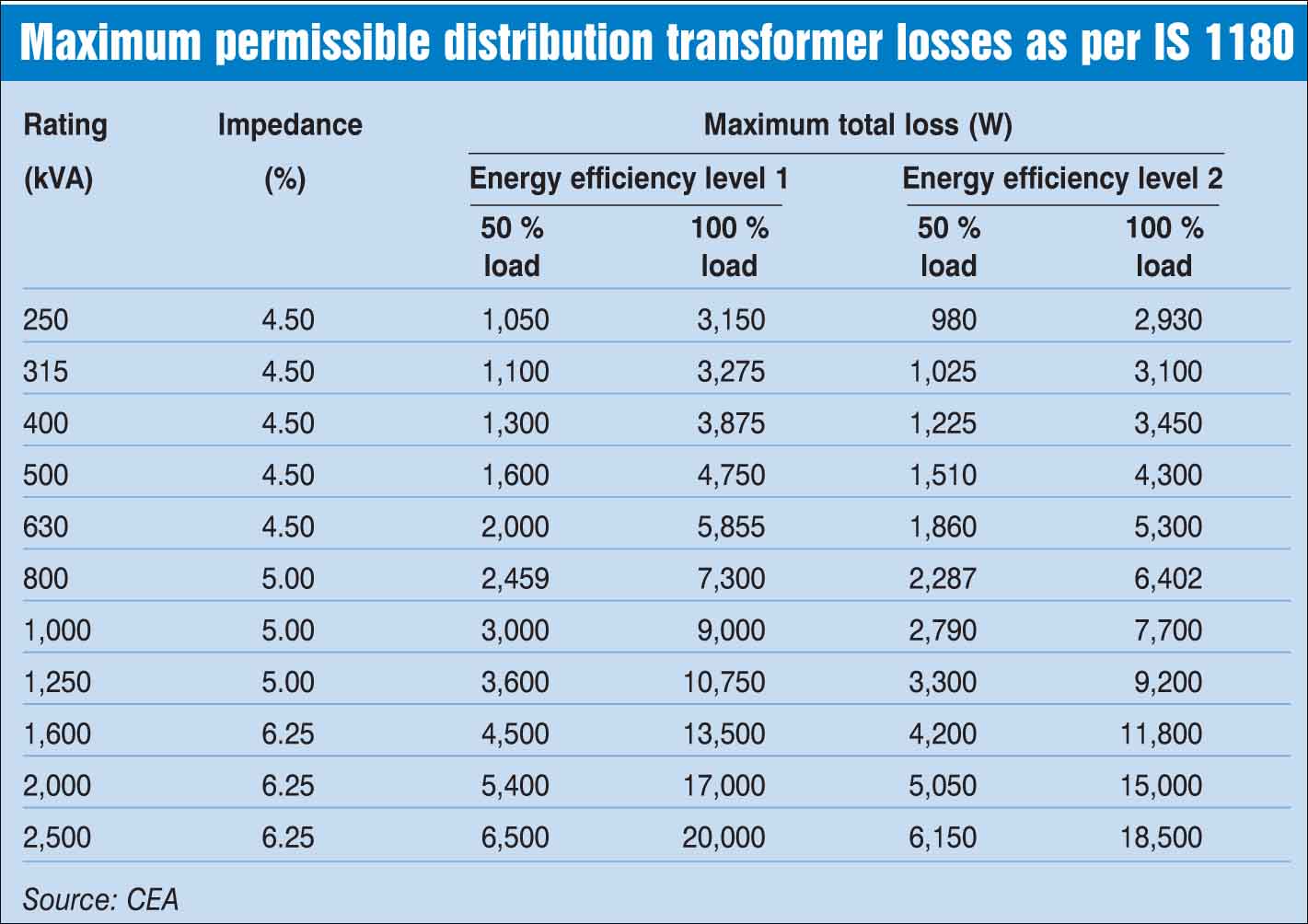 Notably, in December 2016, the BEE upgraded the star ratings of distribution transformers and assigned maximum permissible loss limits based on the loading for each rating. In the upgrade, the BEE has made Level 2 category of transformers of IS 1180:2014 as Star 1 category,  and Level 3 as Star 2. Further, the BEE has introduced three additional star rating categories – Star 3, Star 4 and Star 5. In order to align with the BEE’s notified losses, the BIS is in the process of amending IS 1180.

The domestic distribution transformer manufacturing industry is facing a number of issues and challenges. One of the key issues pertains to the dependence on the global market for a few raw materials (including CRGO). Suppliers of these critical items still dictate market price and limit India’s opportunities for becoming a global player. Another issue in the segment is the pricing pressure arising from the unorganised market structure. As many manufacturers are slowly graduating to the medium-sized category, the industry is developing an organised participants’ base and manufacturers are shifting towards more aggressive and price-sensitive manufacturing rather than quality manufacturing. Another issue facing the industry pertains to the star ratings requirement from customers. The certification of each product is an expensive process as there are very few testing facilities in the country. Large power transformers are sometimes sent to overseas facilities for testing. Besides this, the industry lacks mandatory guidelines on the installation and maintenance of transformers, earthing practices, loading of transformers, the use of protection equipment, etc.

Net, net, the distribution transformer industry in the country is in the pink of health on the back of growing demand under government schemes and the availability of significant manufacturing capacity. However, in order to ensure continued growth, the issues pertaining to testing facilities for transformers, pricing pressures, etc. need to be resolved.