However, of late, renewable energy appears to be making significant inroads. A key factor driving this trend has been the need to rationalise energy costs through an optimal fuel portfolio. Capital costs, which were a major hindrance to the adoption of renewable technologies, have reduced significantly. Wind power tariffs are equivalent to, or lower than, industrial power tariffs in some states. Solar power has registered a steep decline in costs due to a drop in cell and module prices globally. There is also a strong business case for biomass-based generation, which can be used as baseload power in agricultural regions where logistics costs are low.

Another driver of renewable technologies is renewable purchase obligations (RPOs) mandated for large captive power producers. Further, the development of energy storage systems required to integrate renewable energy into the grid will enable the replacement of diesel generator sets in the commercial and industrial sectors. Besides generating power under the captive model, commercial and industrial consumers are increasingly procuring power through other routes such as open access and third-party power purchase agreements (PPAs), at lower rates than those charged by discoms.

According to an International Renewable Energy Agency IRENA 2018 report, active corporate sourcing of renewable electricity reached 465 TWh in 2017, representing 3.5 per cent of the total electricity demand in the commercial and industrial sectors and 18.5 per cent of the total renewable electricity demand globally. Power generation for self-consumption is the most common sourcing model, followed by the purchase of unbundled energy attribute certificates and signing of PPAs.

Region-wise, countries in Europe and North America continue to account for the bulk of corporate sourcing. These countries are home to a large number of companies that are actively procuring renewables not only in the country where they are headquartered, but also at their international locations. Lately, the rising demand for renewable electricity has been noted among companies headquartered in the Asia-Pacific region and Latin America. In Africa and the Middle East, though few corporate procurement deals have been signed so far, the region promises high potential. Among emerging economies, South Africa and India have the largest number of companies actively sourcing renewable electricity.

Corporate PPAs became popular in the mid-2000s and have since emerged as an attractive option for companies looking to source renewable electricity at a cost-competitive price. In India, PPAs have been signed by both multinational and national corporations. Adobe signed a 3 MW PPA with CleanMax Solar in late 2017 to meet 100 per cent of its Bengaluru campus power requirement. Meanwhile, the Chennai Metro signed a 25-year PPA with CleanMax in 2017 to source 6 MW of rooftop solar energy.

Open access is a mechanism that allows generators to sell power to the highest bidders while consumers can source their needs from the most economic seller. The key drivers for open access are the growing demand for electricity and significant investment interest in renewables. While the terms of a private PPA can be negotiated to meet the expectations of both parties, government tenders are set in stone and cannot be altered. A key difference is in the size of projects. While private PPAs are in the range of 5-25 MW, discom (distribution company) PPAs usually range from 50 MW to 100 MW. Further, private players have a larger team to discuss the terms of the PPA with each consumer as opposed to a central team of discoms for drafting bidding and tender documents. The responsibility of land acquisition and power transmission lies with the developer in the case of private PPAs, while for discom PPAs large installations such as solar parks are usually made available.

On the financial front, private players find it challenging to secure debt. Further, private PPAs are usually signed for a period of up to 10 years while PPAs with discoms are signed for a 25-year period. Despite these concerns, private PPAs are preferred by developers since they provide better protection as compared to discom PPAs. Payment experience under private PPAs has been better as dues are cleared within three months unlike in the case of PPAs with discoms, which take a much longer time for clearing their dues.

Open access for renewable energy projects has not taken off, primarily due to the reluctance of discoms that stand to lose their highest-paying customers. Further, in some states, open access charges are higher than the cost of power, and therefore not always feasible. According to sector experts, in most states, utilities lobby hard with the state electricity regulatory commissions (SERCs) to increase open access charges to cut out competition for their high-value consumers. Moreover, the state governments have restricted the export of power using open access when there is a shortage in the state under Section 11 of the Electricity Act, 2003.

In the recent past, several SERCs have announced an additional surcharge, aside from the cross-subsidy surcharge payable by open access consumers, making bilateral open access transactions unviable. As a result, even though renewable power installation costs have gone down, open access has not gained traction. The availability of cheap power on the energy exchanges is another deterrent to the growth of the segment. 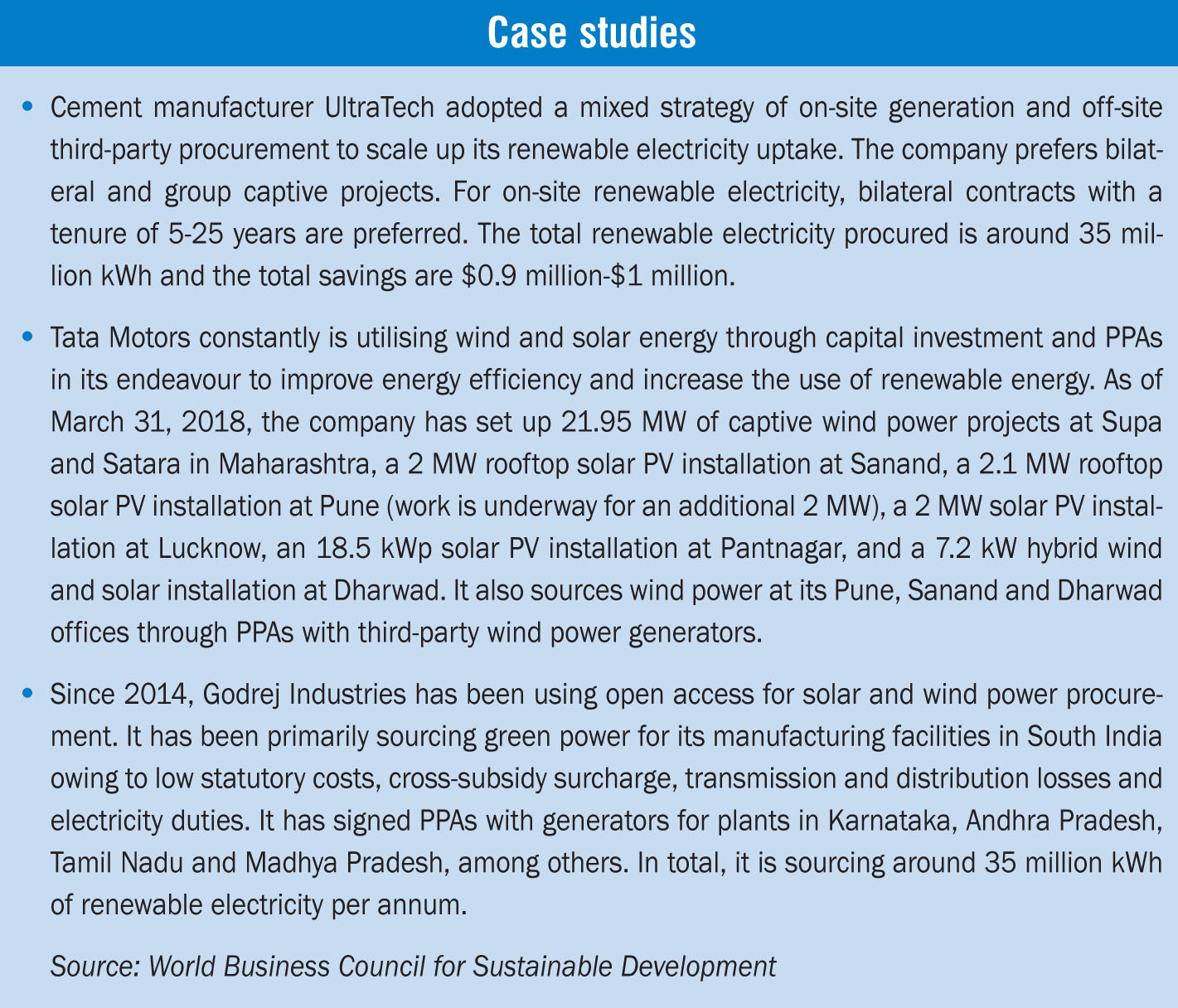 The states of Tamil Nadu, Maharashtra and Rajasthan account for the highest rooftop solar installations in the country, with the maximum capacity installed in the industrial sector, followed by the commercial and public sectors. In terms of scale too, the size of rooftop projects in the commercial and industrial segments is increasing steadily. In Amritsar, Punjab, a 19 MW project across the 82-acre Radha Soami Satsang Beas (RSSB) Educational campus is currently the largest rooftop solar project in the world. Further, the international airport in Kochi has a 12 MW solar plant, making it the first fully solar-powered airport in India. With favourable project economics, a progressive regulatory scenario and easier availability of finance, segment growth is clearly picking up.

Besides the regulatory and legal framework, the industry’s key considerations while adopting rooftop solar include the payback period, equity/project internal rate of return, carbon footprint reductions, hybrid storage (to reduce the use of diesel generators and fuel consumption), investment mode (opex or capex), lifespan of the plant, operations and maintenance requirements, and land procurement cost.

Competitive solar tariffs and other incentives, the net metering initiative, exemption of grid charges and increasing grid electricity tariffs work in favour of the rooftop solar segment. These, coupled with the large unutilised rooftop solar capacity in India, bode well for the sector.

There are three types of rooftop solar system configurations:

Currently, there are two types of rooftop solar business models available. The capex model includes a full upfront investment by the consumer who retains ownership. The main benefits include savings on electricity bills through net metering, payment from the discom for excess generation and incentives such as accelerated depreciation (AD) (relevant for non-independent power producer [IPP] customers), concessional customs duty, excise duty exemptions and a central capex subsidy of 15 per cent. Another driver for this model is the grid tariff parity in several states for the industrial and commercial segments.

The opex/renewable energy service company (RESCO) model entails zero investment by the consumer, and a PPA is signed between the developer and the consumer. The tariff is fixed and the incremental tariff has a fixed annual escalation. The overall system is leased to the solar developer. The key benefit under this model is savings on electricity bills due to the reduced tariff.

Also, different metering provisions have been implemented by state regulators to incentivise consumers to install rooftop solar systems. In the net metering system, a bidirectional meter records the export and import of power from the grid, and the consumer is billed for his/her net consumption from the grid. Excess solar generation is compensated for at the end of the metering period.

The key challenges that hinder the growth of the rooftop sector are the fragmented customer base requiring extensive business development, high counterparty risks, lower returns in the capex model as compared to the RESCO model (favoured by IPPs due to the AD benefits), and limited customer awareness, among others.

A variant of the captive model is the group captive model. A large number of group CPPs based on solar and wind are operational in the states of Karnataka, Haryana, Rajasthan, Maharashtra and Tamil Nadu. The concept was evolved by industries to avoid the cross-subsidy charges levied on interstate electricity sale. Also, the Electricity Act, 2003 has exempted customers from paying cross-subsidy charges if they participate in a “group captive” project.

However, group captive regulations are expected to become more restrictive. Renewable energy players are worried about the Centre’s proposed amendments calling for stricter norms for the shareholding pattern of CPPs. The majority of the companies owning such group CPPs (as  much as 5,000 MW of renewable energy capacity installed in Tamil Nadu) might have to restructure their equity and shareholding pattern before April 2019 when the proposed amendments are to be implemented.

Experts said the ministry acted upon several complaints from stakeholders against dummy group captive plants. The government has now changed the definition of “ownership” for CPPs, which should be based on the value of capital as well as the voting rights, and not on the number of shares. Experts feel that this is a much-needed reform to prevent the flagrant abuse of the intent of law to encourage group CPPs by some IPPs, and it was causing financial loss to the discoms.

The move is likely to affect the competitiveness for industrial consumers. According to an analysis by India Ratings, the average realisations of renewable energy group captive companies were in the range of Rs 4.50-Rs 6 per unit during 2015-18, depending on the location and capacity for sale. Industrial customers saved Re 0.50-0.75 per unit when purchasing power from these companies. 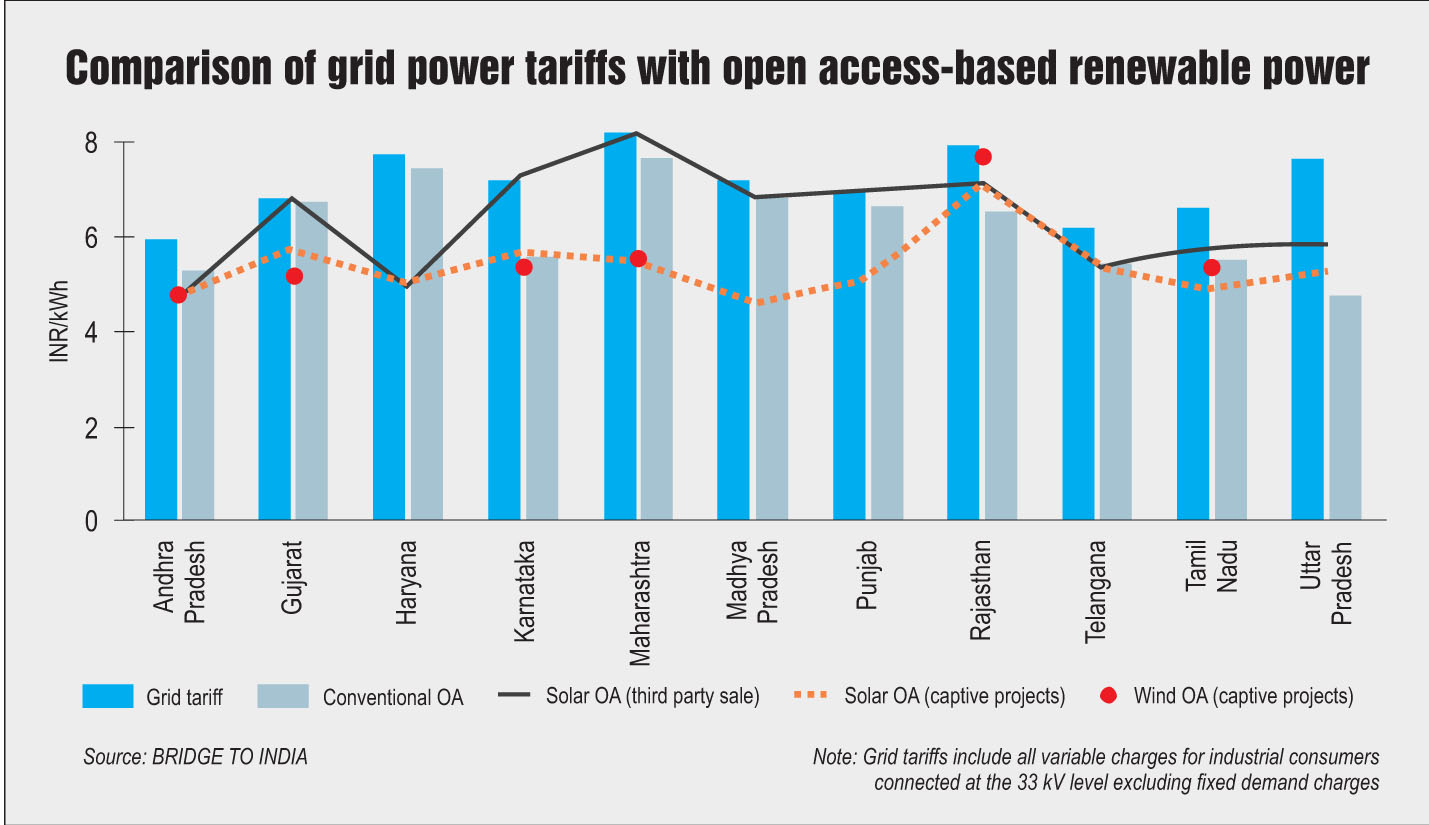 One of the challenges of corporate PPAs relate to contract enforceability, which is difficult in India, and in many cases, dispute resolution can take years. Given the falling solar and wind energy tariffs in India, PPAs signed today might seem expensive after five years. Another challenge is the limited space. For most commercial and industrial buildings, rooftop solar plants can fulfil less than 10 per cent of their total power requirement due to the limited rooftop solar space available. From an economic perspective, this may lead a corporate buyer to choose another form of electricity generation. There are regulatory challenges as well. For instance, in most states, delays in receiving net metering approvals can keep plants underutilised for months after commissioning.

Notwithstanding these challenges, there is a compelling case for corporate customers to increase the share of renewable energy in their power sourcing strategies in order to reduce costs and minimise their environmental footprint.