One of the most pressing concerns for India’s e-mobility plans has been the lack of easy availability of public charging infrastructure for electric vehicles (EVs).

Lending clarity on the future roadmap for EV charging, the power ministry this month issued the final policy guidelines for public charging infrastructure for EVs. “With the support of the government, electric vehicles have started penetrating the Indian market. However, the availability of adequate charging infrastructure is one of the key requirements for accelerated adoption of electric vehicles in India. It is proposed to encourage this by laying down an enabling framework,” stated the power ministry in its policy note.

The policy guidelines focus on a number of aspects for public charging infrastructure including standards for charging, licensing requirements, proposed location for charging stations, strategy for pilot roll-outs and tariffs, and address consumer and investor concerns on a number of issues.

For instance, range anxiety has been one of the key issues holding back EV adoption. The policy guidelines propose that efforts should be made to set up charging stations every 3 km x 3 km, and should include fast chargers, with priority being given to large population cities and major highways. Another major highlight of the guidelines is that individuals will be allowed to set up public charging stations without applying for licences and be given priority connections by discoms. This is expected to help in the proliferation of charging stations.

One issue that has been lingering with investors is the lack of clarity on the standards to be adopted for chargers. To recall, Energy Efficiency Services Limited (EESL) had to call off the second tender for procuring EVs (10,000 cars) as there was no clarity on the chargers that were to be adopted. Ending considerable debate on the international charging standards to be adopted, the power ministry has stated in the new guidelines that multi-standard chargers would be the way to go.

Experts note that even though charging at home is expected to remain the most dominant way of charging an EV (estimated to account for 80-85 per cent of the total charging), good public charging infrastructure is extremely relevant for propagating EVs. “A good public charging infrastructure is important to give confidence to users,” remarks Abhay Damle, joint secretary, Ministry of Road Transport and Highways.

Power Line takes a closer look at the key proposals in the guidelines, how India’s EV ecosystem is shaping up, the key challenges for the charging segment and the future outlook…

Guidelines and standards on charging infrastructure

Delicensing the setting up of public charging infrastructure

The ministry will designate a central nodal agency to facilitate this roll-out, while the states can have their own nodal agencies, most likely, the state discoms.

The roll-out of public charging stations is planned in two phases over the next five years. Under Phase I, to be implemented over the first three years, all megacities with a population of over 4 million as per Census 2011 (Mumbai, Delhi, Bengaluru, Hyderabad, Ahmedabad, Chennai, Kolkata, Surat and Pune) will be covered.

All existing expressways connected to these megacities and all important highways connected to each of these mega cities will be taken up for coverage under Phase I. The key expressways identified for this are Mumbai-Pune, Ahmedabad-Vadodadra, Delhi-Agra (Yamuna Expressway), Surat-Mumbai, Agra-Lucknow, Delhi-Agra (NH-2) and the Eastern Peripheral Expressway. Other major roads include the Hyderabad Outer Ring Road, the Delhi-Jaipur highway, the Bengaluru-Mysore highway and five connected highways to each megacity.

Under Phase II, to be implemented in the third to fifth years, big cities like state capitals and union territory headquarters are proposed to be covered.

The current international standards being used by most vehicle manufacturers are the European Combined Charging System (CCS) standard and the Japanese Charge de Move (CHadeMO) standard. The CCS is generally used by large automakers in the US and Europe. The Central Electricity Authority has reportedly endorsed the CCS standard as being more secure. Meanwhile, Maruti Suzuki India Limited, India’s largest carmaker, follows the CHadeMO standard developed by its parent, Suzuki Motor Corporation, and Toyota Motor Corporation.

According to the guidelines, every charging station needs to have a minimum of three fast-chargers, one CCS-style plug, one CHadeMO charger and one Type 2 AC fast charger. While the first two types of chargers would have to have a minimum output of 50 kW and 200-1,000 Volts, the Type 2 plug would need to have a minimum of 22 kW and 380-480 volts. In addition, the charging stations will compulsorily need to have two slow/moderate charge points, one with a Bharat DC-001 connection with 15 kW and 72-22 Volts and the other, a Bharat AC-001 with 10 kW and 230 Volts.

The guidelines lay down the technical requirements for a PCS. It should have an exclusive transformer with all related substation equipment such as safety appliances, a 33/11 kV line/cable with associated equipment including that needed for line termination and metering, adequate space for charging and entry/exit of vehicles, one or more electric kiosks/boards with the installation of all the charger models and a tie-up with at least one online network service provider to enable advance remote/ online booking of charging slots by electric vehicle owners.

If a fast-charging facility is also planned, the PCS should have appropriate liquid-cooled cables for on-board charging of fluid-cooled batteries and appropriate climate control equipment for fast charging of the batteries to be used for swapping. These conditions do not apply to private charging points owned by individuals or captive charging infrastructure set up by a firm for its own fleet of EVs. 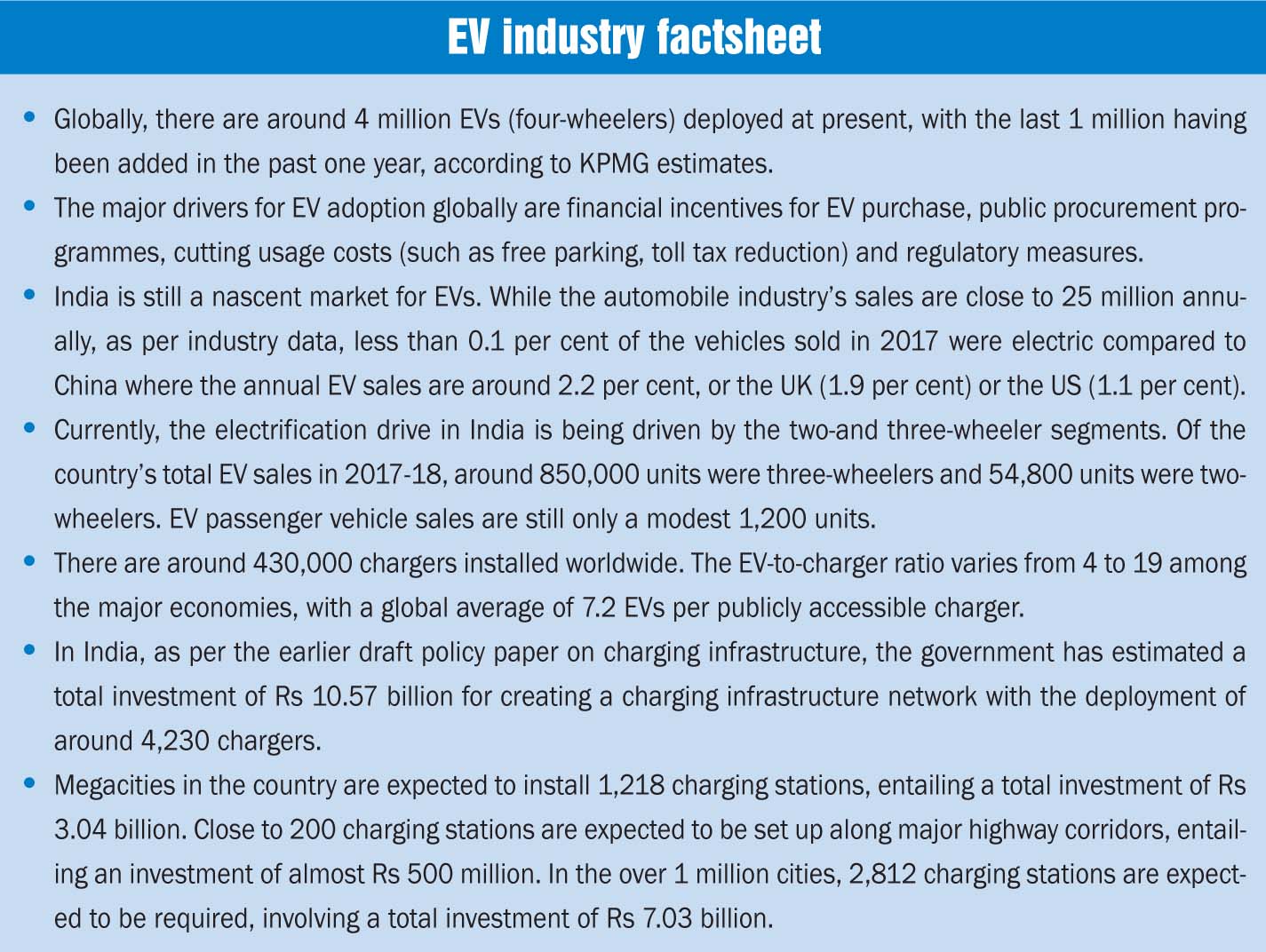 As per the guidelines, power tariffs for charging EVs will be determined by the appropriate commission, provided these do not exceed the average cost of supply plus 15 per cent. For residential users, the tariffs for charging will be the same as for domestic consumption of electricity. A PCS can levy a service charge, with a ceiling fixed by the nodal agency in each state.

Charging station data will need to be shared with the discoms. Further, public charging station providers are free to create charging hubs and install additional kiosks/chargers than that prescribed. Further, a tie-up with at least one online network service provider will be required to enable advance remote/online booking of charging slots by EV owners.

One of the main obstacles that need to be tackled is which players have the incentive to invest. As per government estimates, the total cost of a multi-standard charging station (excluding land cost) works out to Rs 2.5 million, which includes Rs 1.5 million for the various chargers (CSS, CHadeMO, Type 2 and Bharat) and Rs 1 million for the transformers, mounting, cabling and construction. Industry experts, however, note that multi-standard chargers are generally 5 per cent more expensive than single-standard chargers.

Given the small size of the EV market currently, private players have raised concerns with regard to poor utilisation levels at PCSs. Thus, private charging infrastructure companies may not be ready to invest on a large scale. There could also be a number of operational challenges, particularly relating to land requirements.

At this point, therefore, the discoms or government utilities and oil marketing companies would need to step in. Also, EV manufacturers would have the incentive to set up charging infrastructure as it would persuade more people to buy EVs. There is also a need to explore the public-private partnership (PPP) model, say industry observers. This has been successfully tried in China (see box). 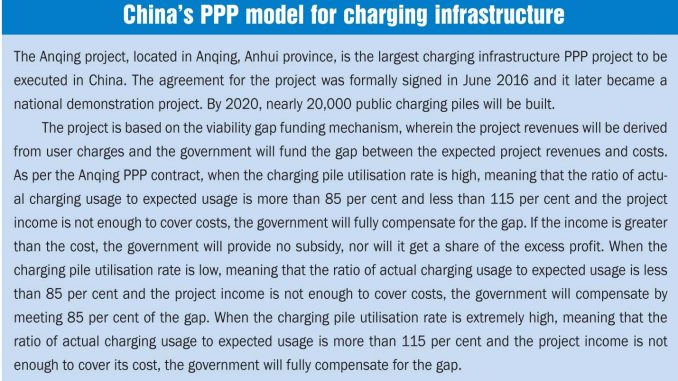 For now, the government is clear that the size of India’s potential EV market is large enough for investors to look at it without subsidies. “The government would be more focused on policy-related aspects and setting up the initial nucleus of charging stations. Even if one considers a very sub-optimal 5 per cent penetration of vehicles that will be converted to electric, four years down the line almost 200,000 vehicles will be going electric every year. This would mean a requirement for 20,000-30,000 charging stations annually to cover the length and breadth of the country. India offers a huge market,” says Damle.

Earlier this year, the power ministry gave licence-free status to charging infrastructure operators. According to the power ministry’s notification issued in April 2018, no licence is required to operate EV charging stations in India.

NITI Aayog is also working actively with various ministries to come up with various measures to develop the EV charging ecosystem. “The current petroleum/diesel stations are proposed to be converted to charging stations and the ministries are working towards it. Also, the housing ministry’s draft policy discusses the kind of charging infrastructure to be used in buildings and housing complexes,” notes Anil Srivastava, adviser, NITI Aayog.

He adds that a number of states have been extremely proactive. For instance, Delhi’s recently released draft EV policy is fairly aggressive. According to the draft, the state government plans to have charging points every 3 km. The draft policy proposes a subsidy of 100 per cent (up to Rs 30,000) to set up charging points (for the first 10,000 points) in Delhi. The building laws for both upcoming and existing buildings in Delhi will also be amended to ensure they have EV charging infrastructure and a special tariff for electricity used by EVs. Meanwhile, the second phase of the Faster Adoption and Manufacturing of (Hybrid) and Electric Vehicles (FAME) scheme is under consideration, says Damle.

According to a 2016 McKinsey survey of EV buyers in key markets such as China, Germany and the US, consumers rank not having enough access to efficient charging stations as the third most serious barrier to EV purchase, behind price and driving range. With EV prices declining and ranges expanding, charging could soon become the topmost barrier.