Established as a lignite mining and lignite-based power generation company under the administrative control of the Ministry of Coal, NLCIL serves as an important source of power generation for Tamil Nadu, Andhra Pradesh, Karnataka, Kerala, Telangana, Rajasthan, and the Union Territory of Puducherry.

Today, the company’s installed capacity has crossed 4.8 GW. While pithead lignite-based power generation constitutes the bulk of the installed capacity, the company has also ventured into coal-based power generation and renewables. Despite operating some of the oldest plants in India, the company has managed to deliver a reasonably good operational performance by keeping the plant load factor (PLF) high. Further, access to captive lignite mines has helped in ensuring adequate fuel availability. The company recorded a PLF of over 72 per cent in the last fiscal, significantly higher than the national average. This has also aided in delivering a strong financial performance year after year.

NLCIL has set an ambitious capacity addition target to cross 21 GW of installed capacity by 2025 in the long term and about 11.3 GW in the next three years. To this end, several power plants, both coal and lignite based, are planned to be set up in states other than Tamil Nadu, such as Uttar Pradesh, Odisha and Andhra Pradesh. Renewables capacity is expected to form a major part of the company’s growth plans with around 3.5 GW targeted in the next few years. NLCIL is also eyeing acquisitions of almost 3 GW to grow its installed base. On the mining front, the company is looking at increasing its lignite mining capacity besides foraying into coal-based mining. Overall, a capex of Rs 1,290 billion is expected to be incurred by the company by 2025.

Its renewables’ capacity comprises 51 MW of wind power and 541 MW of solar power. The entire wind capacity comes from a 51 MW wind power plant in Thirunelveli district, Tamil Nadu. The company’s solar capacity includes various plants in Tamil Nadu, of which almost 300 MW was commissioned this year (this is part of the 500 MW capacity that was tendered in December 2016). The company also owns a 1 MW rooftop solar photovoltaic power project in Neyveli township.

The PLF for NLC’s thermal power projects  (TPPs) stood at 72.39 per cent in 2017-18 and 73 per cent in 2016-17, higher than the national average, which has been near the 60-per cent mark. That said, the company’s PLF has witnessed a considerable decline since the 2013-14 levels when it stood at 83 per cent. “The growth of renewable power, the introduction of the renewable purchase obligation (RPO) mechanism, the reinforcement of green energy concepts and merit order ratings are the key reasons for the lower PLF. The huge quantum of surrender of power by the beneficiaries has resulted in a considerable unrequisitioned power surplus in the industry, because of which there has been significant under-utilised capacity in the thermal segment,” explains a company spokesperson.

NCLIL registered a total income of Rs 90.83 billion in 2017-18 (Rs 80.59 billion from the power sector, Rs 6.51 billion from the mining sector and Rs 3.73 million from others), as against Rs 93.27 billion in 2016-17, marking a year-on-year decline of nearly 2.57 per cent. The decline in income from operations was mainly due to unprecedented surrender of power impacting the company’s revenue generation adversely and also on account of passing on a benefit of around Rs 7.5 billion to the beneficiary discoms. Meanwhile, NCLIL recorded a net profit of Rs 18.49 billion in 2017-18 as against a profit of Rs 23.69 billion in 2016-17. The utility also incurred a capital expenditure of Rs 8.27 billion and Rs 1.28 billion on existing power plants in 2017-18 and 2016-17 respectively. The huge increase in capital expenditure is attributed to the 1,000 MW Neyveli New thermal power project under construction and the 500 MW solar power projects tendered in Tamil Nadu in December 2016.

NCLIL has a slew of power projects in the pipeline. As per its Corporate Plan 2018-25, the company has outlined a capacity addition of over 17,771 MW till 2025 through direct implementation, JVs and acquisitions. These would be based on lignite, coal and renewables.

On the lignite front, the company is looking to add almost 3,540 MW of capacity. It is setting up the 1,000 MW Neyveli New TPP (with two units of 500 MW each) in replacement of its existing TPS-I station, which is planned to be de-commissioned in 2018-19. The Neyveli New TPP is expected to be commissioned in 2018-19.  This will be the first 500 MW-sized unit to be based on lignite in the country. Further, at the existing TPS-II project at Neyveli, a second expansion is planned with a 2,640 MW (4×660 MW) capacity lignite-based pithead power station, expected to be commissioned from 2021-22 onwards. The company had also proposed two other lignite-based power projects – the 250 MW Bithnok TPP and the 250 MW Barsingar Expansion TPP in Rajasthan linked with greenfield lignite mines. However, both these projects have been put on hold for now.

In the coal-based segment, a capacity addition of over 5,980 MW is proposed. This includes the 1,980 MW under-construction Ghatampur coal-based TPP by Neyveli Uttar Pradesh Power Limited, a JV of NLC and Uttar Pradesh Rajya Vidyut Utpadan Nigam Limited. The plant  is expected to be commissioned in 2020-21. NLCIL is also planning to set up a 4,800 MW coal-based pithead power station at Talabira in Jharsuguda district of Odisha in two phases, which is expected to be commissioned by 2023-25.

With respect to renewables, almost 3,560 MW is expected to be added by 2020-21. This includes 909 MW of solar capacity, which is expected to come up in Tamil Nadu by April 2019. Of this, 709 MW capacity was won in the 1.5 GW auction conducted by TANGEDCO in 2017. In future, NLCIL plans to add almost 2,851 MW of solar and wind power in various states including Tamil Nadu and the Andaman & Nicobar Islands, which are targeted to be completed by 2020-21.

The company is also reportedly on the look-out for acquiring power assets, including stressed power assets, across India with nearly 3 GW proposed to be added through this route. Earlier in 2018, the company had shortlisted the GMR Group’s 1,370 MW coal-based power project in Chhattisgarh as well as state-run Damodar Valley Corporation’s Raghunathpur plant in West Bengal. However, both plans were facing hiccups. Meanwhile, in compliance with the new environmental norms, NLCIL has contemplated providing flue gas desulphurisation (FGD) plants and selective catalytic reduction (SCR) systems at the upcoming Neyveli New TPS and all its future lignite and coal-based TPPs. 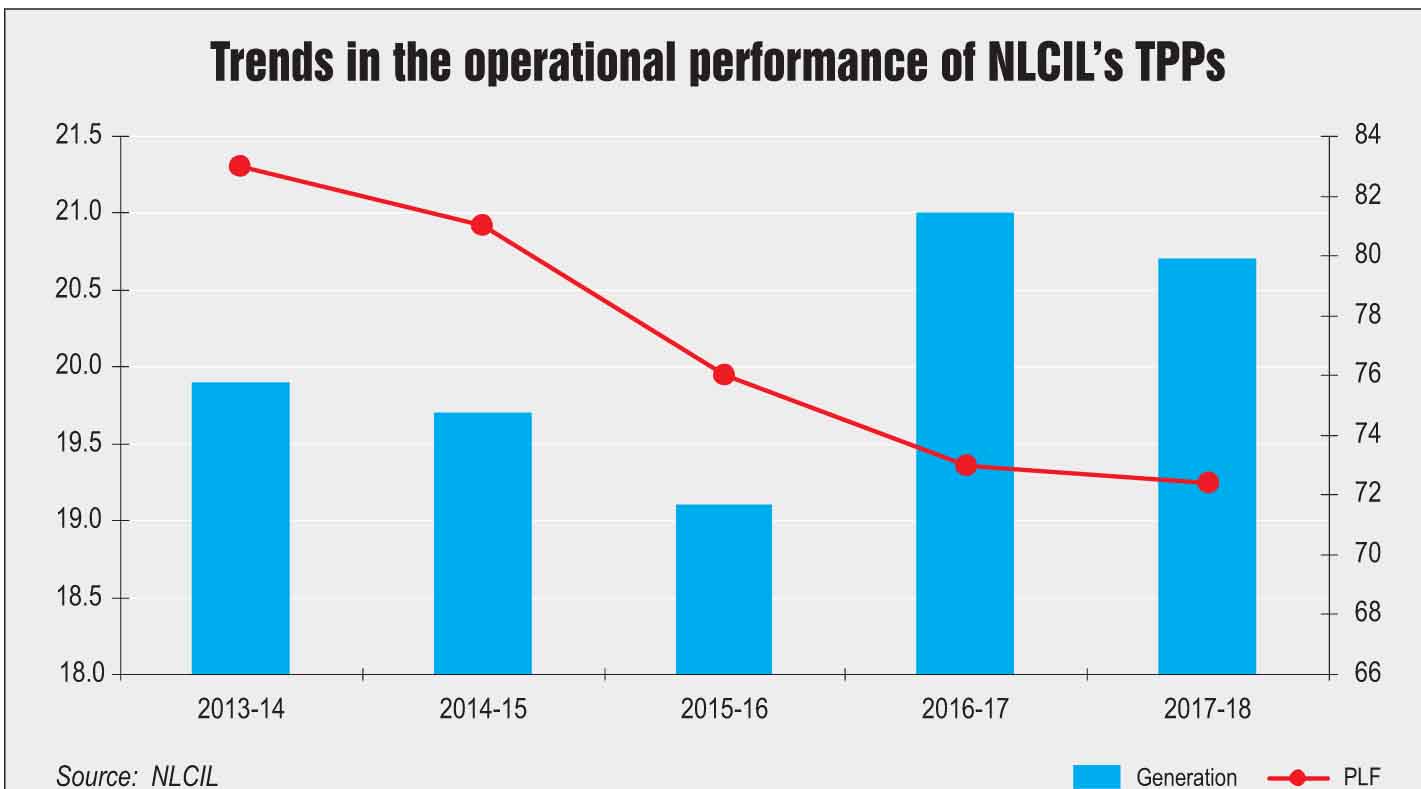 According to credit rating agencies, NLCIL remains exposed to receivables collection risk, given the weak credit risk profile of key consumers, which are primarily state discoms. Nearly half the power generated by NLCIL is sold to TANGEDCO, which is still in the red. The company also faces risks relating to time and cost overruns due to its large ongoing capacity expansion. Also, the increasing costs (both social and economic) of land acquisition may delay the company’s proposed projects and impact the operating cost of power projects.

That said, given NLCIL’s long track record in power generation, robust operations and fuel security, the company is likely to meet its capacity augmentation goals in future.