The power sector in India is characterised by distortions due to cross-subsidy charges in electricity tariffs, use of traditional mining methods, and lack of quality and reliable power supply. These distortions have an economic cost, and not only impact the growth of the economy, but also have a bearing on the health of its population and the environment. Other Southeast Asian countries such as Pakistan and Bangladesh face similar distortions. Recently, the World Bank released a report, “In the Dark: How Much Do Power Sector Distortions Cost South Asia?”, which broadly identifies the cause of power sector distortions in Southeast Asian countries and puts forth recommendations to minimise their economic cost. The World Bank report estimates that in 2016, the total annual economic cost of power sector distortions was about $86.1 billion in India (4.1 per cent of GDP) and $11.2 billion in Bangladesh (5 per cent of GDP). In Pakistan, it was estimated at $17.7 billion (6.5 per cent of GDP) in 2015.

In order to tackle the upstream fuel-related distortions, the report suggests diversifying the fuel portfolio to include various sources of power generation including renewables as dependence on a single fuel raises reliability concerns. The report notes that investments alone cannot solve the problems facing Southeast Asia’s power sector. Private participation and competition are equally essential for reforming the sector and enhancing operational efficiency. The report lays emphasis on prioritising quality power supply, in addition to improving electricity access. Unreliable electricity supply limits the potential gains from electrification. Apart from this, the report notes that for energy prices to truly reflect the cost of energy consumption, removing regulatory and social distortions is required. The potential gains from power sector reforms are huge, ranging from cost savings for utilities, income gains for households and firms, to reduction in air pollution.

Distortions in the Indian power sector

Coal mining in India is characterised by unproductive mining practices. The more efficient mining practices, long-wall system and continuous mining, accounted for about 11.5 per cent of the underground output in 2016. Moreover, underground mining in the country largely relies on traditional methods, involving manual digging, extracting, and hand-loading of coal on carts. On the coal pricing front, despite various reforms, the price of coal for power generation has remained low. Although there is no direct subsidy for coal, the price of domestic coal for the power sector in India is significantly lower than that of imported coal, the spot market price of electricity, and the price of coal for unregulated sectors. On the coal transportation front, inadequate rail infrastructure has resulted in delivery bottlenecks.

Apart from these, coal-based power generation involves high economic cost on account of hidden expenses in the form of emissions, diseases and accidents, which are not borne by the utilities. The hidden cost of coal is borne by mining communities and the society at large. The combined health and climate change damages from burning coal are 11 times the latest notified price of coal, which is $25 per tonne including the clean environment cess.

The report notes that electricity generation in India is dominated by the central and state government thermal power plants, which are less efficient than private power plants.

With regard to transmission and distribution infrastructure, inadequate investment has led to network congestion, which slows down power evacuation and prevents the development of a competitive power market.  Moreover, the state governments continue to interfere in utility operations although state utilities have been unbundled and corporatised. Besides, repeated bailouts create a soft budget constraint, and also weaken the incentives for efficiency improvement.

Another key core area of concern for the power sector is the underpricing of electricity. Farmers and households receive electricity at subsidised prices. Besides undermining the discoms’ ability to purchase electricity and carry out maintenance, these subsidies trigger overexploitation of groundwater. 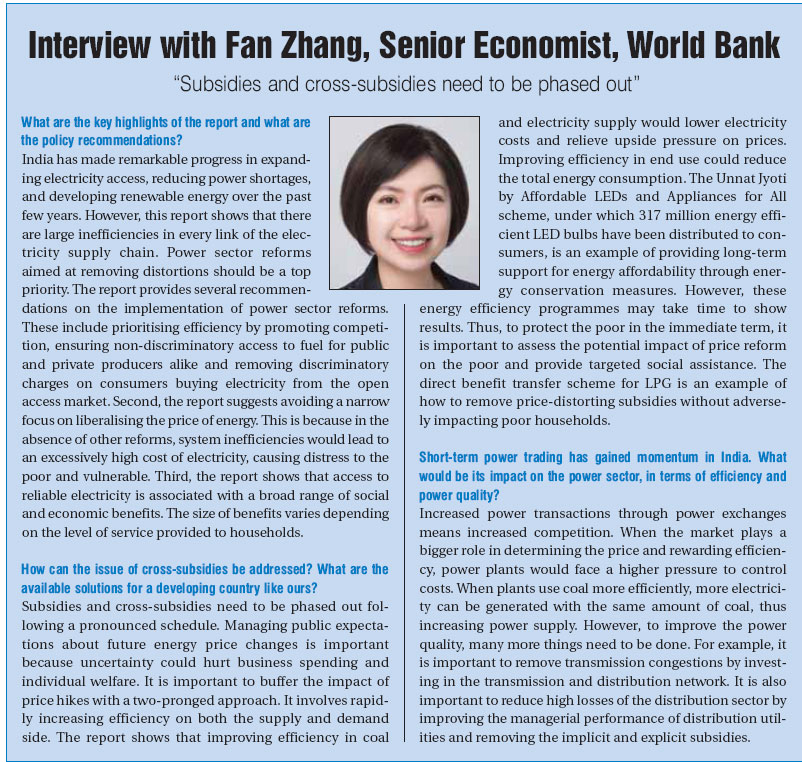 At the downstream level, a key impact of power sector distortions is the “loss of welfare” for households. Reliable electricity supply is associated with a broad range of social and economic benefits. Another downstream distortion is cross-subsidisation, which reduces the competitiveness of grid electricity for industrial consumers. Even though large industrial users are less costly to serve, their average industrial tariff is nearly twice the average residential tariff. In a way, cross-subsidies impose an implicit tax on industrial consumers. Apart from this, unreliable access to grid electricity compels households and businesses to resort to other options.

To conclude, tackling power sector distortions, primarily those pertaining to mining technologies, electricity tariff and reliability of power supply, will go a long way in improving the operational and financial performance of the sector and will also drive the growth of the economy.