The domestic conductor industry, meanwhile, has witnessed sluggish growth over the past five years, recording a CAGR of about 2 per cent. The size of the market increased marginally from Rs 72.5 billion in 2016-17 to Rs 81 billion in 2017-18, after recording negative growth for two consecutive years. In the first half of 2017-18 (April to September), it again registered a decline of 6.3 per cent over the previous year. This can be attributed to delays in the finalisation of orders by major buyers.

In the cable industry, the demand for all subcategories of wires and cables such as power cables, control cables and communication cables has grown consistently. In 2017-18, the low voltage (LV) cable segment registered a growth of 27.87 per cent, followed by the control cable segment at 12.2 per cent, and the high voltage (HV) cable segment at 9.7 per cent. In the first half of 2018-19, the LV, HV and control cable segments recorded growth rates of 33.5 per cent, 29.3 per cent and 22.9 per cent, respectively. However, the increase in the import of cables and conductors has impacted domestic demand. In 2017-18, the import of cables stood at Rs 7.34 billion and conductors at Rs 5.25 billion, about 20 per cent and 33 per cent higher than the respective imports recorded in 2016-17. In the first six months of 2018-19, while the import of cables continued to grow, recording an increase of 23 per cent over the previous year, the import of conductors recorded a significant decline of 24 per cent. Meanwhile, the total value of cable exports in 2017-18 stood at Rs 25.6 billion and conductor exports at Rs 18.2 billion, registering a growth of 18 per cent and 15 per cent, respectively. This is a positive indicator for the domestic industry.

The cable and conductor industry has grown significantly in the past few years with investments being made in the power and infrastructure sectors by the government. Going ahead, the size of the industry is expected to double over the next five years, growing at a CAGR of 20 per cent. The continuing focus on 24×7 power supply, the development and strengthening of the T&D network, and electrification of all villages and households are some of the key growth drivers of the cable and conductor market. Various government programmes including the Integrated Power Development Scheme, the Sahaj Bijli Har Ghar Yojana  and the Ujwal Discom Assurance Yojana have led to new investments in the distribution segment.

The government has planned an investment of about Rs 2.6 trillion in the transmission sector during the Thirteenth Plan period (2017-22), which is 1.4 times higher than the proposed capex in the Twelfth Plan period. Of the planned investment, Rs 300 billion is likely to be spent on transmission systems of 220 kV and below.

One of the major drivers for the cable and conductor industry is the integration of renewables to the system. The government has set a target to install 225 GW of renewable capacity by 2022. A large share of this will come from solar installations, creating a significant opportunity for solar cables. Further, to evacuate power from the large-scale renewable energy plants being developed under the plan, a number of transmission lines are being constructed, thereby driving demand for conductors. Further, the ongoing smart city projects are expected to lead to large-scale developments in the power, telecom, housing and other infrastructure sectors, creating more demand for cables and conductors. Underground cabling is an essential part of smart city projects. It has become almost mandatory in densely populated areas owing to increasing right-of-way issues. It is also being preferred owing to its benefits such as low susceptibility to damage from severe weather conditions, greater safety, protection against illegal connections, theft and pilferage, and better aesthetics.

The government also plans to undertake 100 per cent electrification of its broad-gauge network by 2021-22. This involves electrification of almost 40,000 route km of railway lines, which is a huge opportunity for the cables and conductors market. Metro rail projects worth Rs 1.75 trillion are at various stages of approval and are likely to come up for bidding in the next five years, creating a Rs 175 billion opportunity. Further, the oil and gas industry is set to invest Rs 6 trillion over the next seven years, largely focussing on increasing the refining capacity and developing new oil and gas fields. This is expected to boost the cable industry as 3 per cent of the capex in the oil and gas industry is spent on cables.

Reconductoring also increases the demand for cables and conductors. It enables utilities to transmit a higher quantum of power through existing corridors and can significantly scale down losses as well as instances of power outages. 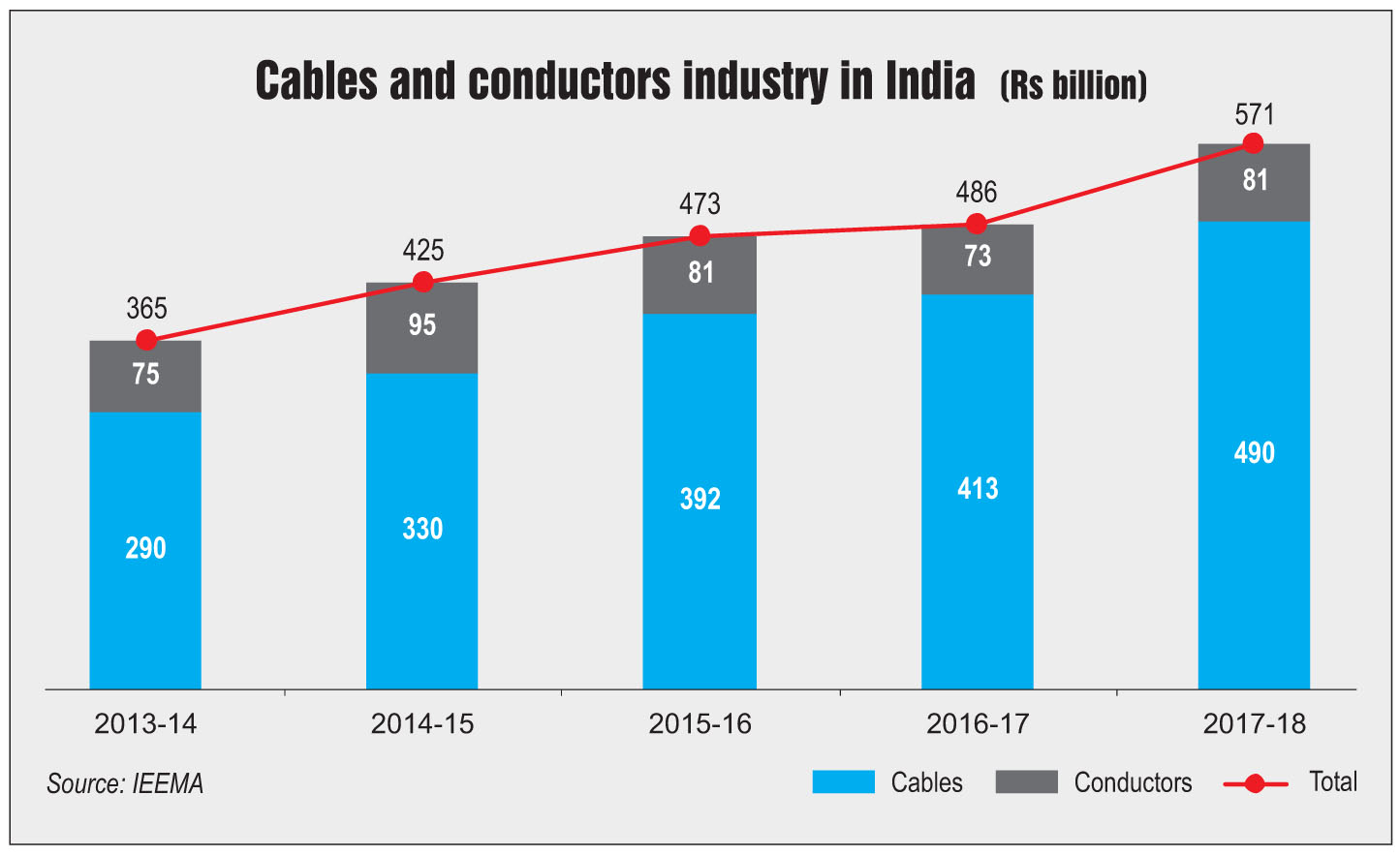 Indian power cable manufacturers have attained maturity, in terms of technology, for HV cables up to 220 kV. They have emerged as competitive players in the global scenario. Some manufacturers have even established themselves in the extra high voltage segment, either through technical collaboration or through joint ventures. However, India is still importing a significant part of its demand for cables and accessories of 33 kV and above voltage levels.

The cable and conductor industry has witnessed immense growth in terms of size and revenue. At the same time, technological advancements and product innovations across different segments have changed the market significantly. However, it continues to face a number of challenges including availability of cheaper imports, input price volatility, delay in project execution and lack of standards. Notwithstanding these challenges, the industry will continue to grow on the back of various government initiatives and changing infrastructural requirements.