Adani Power Limited (APL), which entered the power generation segment in 2006, has aggressively expanded its footprint and is today one of the largest private thermal power producers in the country, with an installed capacity of over 10.4 GW. The company’s project portfolio comprises largely thermal capacity, most of which comes from its flagship project, the 4,620 MW Mundra plant in Gujarat, which set many firsts in the country’s power generation space.

The company is confident about the prospects of coal-based power and aims to reach 20,000 MW of capacity by 2020. A capacity of 7 GW is currently in the pipeline, which includes a large greenfield project in Jharkhand for sale of power to Bangladesh. According to a statement by Gautam Adani, chairman, APL, in the company’s annual report 2018, “While there have been several points of view on renewable energy as a substitute for power generation using coal, the fact is that if India is to overcome its energy deficit and get affordable and reliable power to the 240 million of its citizens that lack electricity, all possible sources of power generation will need to grow responsibly.”

The company operates four coal-based power projects and one solar power project, aggregating 10,480 MW (as of March 2018), across Gujarat, Maharashtra, Rajasthan and Karnataka. The 4,620 MW Mundra Thermal Power Project (TPP), located in Kutch district of Gujarat, comprises four 330 MW and five 660 MW plants. The project has several firsts to its credit – Unit 1 (660 MW) of the project was the first supercritical generating unit in the country and was completed in a record time of 36 months from inception to synchronisation. The TPP is also the first in the country to be registered under the clean development mechanism of the United Nations Framework Convention on Climate Change.

APL’s other thermal plants include the 3,300 MW Tiroda supercritical TPP in Maharashtra, the 1,320 MW Kawai supercritical TPP in Rajasthan and the 1,200 MW Udupi TPP in Karnataka. The Udupi TPP was acquired by APL in April 2015 from Lanco Infratech Limited. On a consolidated basis, APL has tied up 2,000 MW of power with Gujarat Urja Vikas Nigam Limited (GUVNL), 1,424 MW with Haryana’s discoms, 3,085 MW with Maharashtra State Electricity Distribution Company Limited, 1,200 MW with Rajasthan’s discoms, 1,080 MW with Karnataka’s discoms, and 120 MW with Punjab’s discoms. Accordingly, out of the total operational coal-based generation capacity of 10,440 MW, it has tied up 8,909 MW with state discoms under 25-year power purchase agreements (PPAs). In addition, the company operates the 40 MW Bitta solar power project in Kutch, for which it has a PPA with GUVNL.

Overall, more than 88 per cent of the company’s gross generation capacity has long-term PPAs, while the remaining 12 per cent is for merchant-based sales.

The operational performance of APL’s plants in 2017-18 was affected by domestic coal shortages and high imported coal prices. Owing to sustained under-recoveries due to high imported fuel costs and lack of regulatory support, APL resorted to commercial shutdown of its Mundra TPP in May 2018. Further, the Udupi TPP was under a forced shutdown for repair and overhaul but came back into operation from April 2018.

A couple of positive regulatory developments in the past year provided some relief to the company. A key development was the recommendation of the Gujarat government’s high-powered committee (HPC) to amend the Mundra TPP’s PPA in light of the rise in Indonesian coal prices. The project had become economically unviable after a change in Indonesia’s coal pricing mechanism, notified in September 2011, which resulted in a hike in Indonesian coal prices. This increase could not be passed through in the tariff due to the provisions of the PPAs, thus leading to under-recoveries. As of March 31, 2018, Adani Power had suffered financial losses of Rs 97.48 billion owing to under-recoveries of fuel costs.

The HPC has recommended a pass-through of the fuel cost subject to a ceiling price of $120 per metric tonne, a revision in ceiling prices every five years, and lenders reducing APL’s debt by Rs 38.21 billion. Following the HPC’s report, the Gujarat government approached the Supreme Court, seeking amendments to the PPA, which has referred the matter to the Central Electricity Regulatory Commission (CERC) and an order is expected soon. APL had signed two PPAs with Gujarat (1,000 MW each) in 2007 at Rs 2.89 per unit and Rs 2.35 per unit, and another PPA with Haryana (1,424 MW) in 2008 at Rs 2.94 per unit.

Further, APL received favourable regulatory approvals from the Maharashtra Electricity Regulatory Commission (MERC), the Rajasthan Electricity Regulatory Commission (RERC), and the CERC, which will add to the profitability of the company. The MERC order pertains to compensation for a shortfall in coal for the Tiroda TPP due to a change in law. The RERC order relates to compensation for the use of alternative coal under the change in law provisions. The CERC order pertains to the allowance of recovery of capital expenses on flue gas desulphurisation units for Units 7-9 of the Mundra TPP.

Recently, in January 2019, APL reportedly approached lenders for loans worth Rs 100 billion for the project. The loan, if approved, will make it the largest debt financing for a greenfield TPP. The first unit of the project is proposed for commercial operation in January 2022 and the second is likely to be commissioned after a gap of four months. The coal requirement for the project will be met mainly through imported coal. The annual requirement for coal for the plant would be 7-9 mtpa. The imported coal will be received at Dhamra port (Odisha) and will be transported to the project site by rail. Power would be evacuated through a dedicated double circuit transmission line (400 kV) from the plant up to the Indian border in the direction of Bogra (Bangladesh).

Meanwhile, the Dahej power plant has been delayed for several years. In October 2018, an expert panel under the Ministry of Environment, Forest and Climate Change put on hold its request to extend the validity of its environment clearance, which was set to expire. An extension was sought till October 2023. However, the approval was deferred as actual construction work of the power plant was not started due to the absence of a PPA. 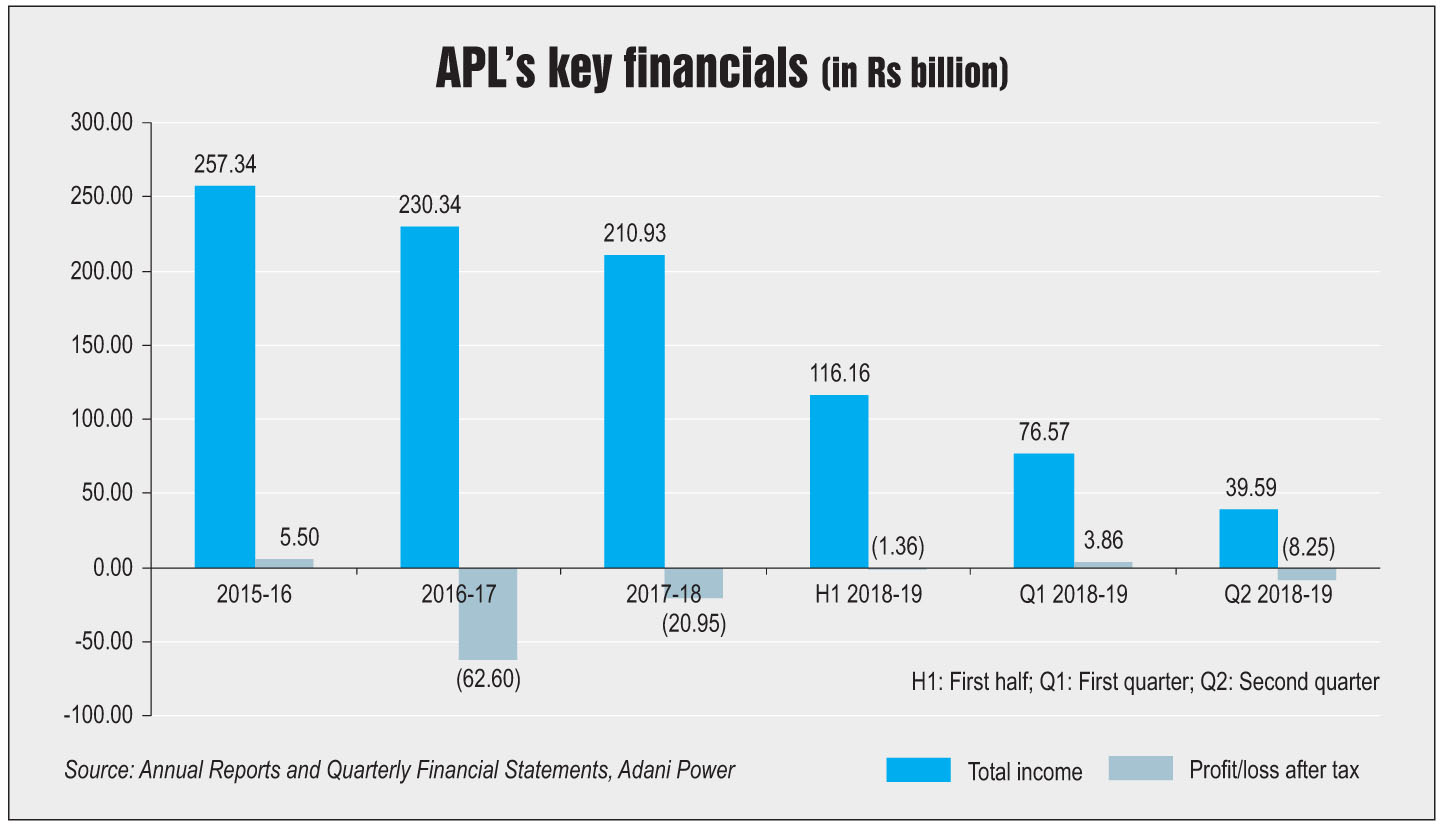 The company recorded a modest financial performance in 2017-18 with a decline in the total revenue owing to lower energy sales accompanied by narrowing of the net loss. The company’s consolidated total income for the year 2017-18 stood at Rs 210.93 billion as compared to Rs 230.34 billion in 2016-17, marking a decline of 8.4 per cent. The consolidated net loss for 2017-18 reduced to Rs 20.95 billion from Rs 62.6 billion following the adoption of a loss minimisation strategy in the face of high imported coal prices and under-recoveries under the PPAs. For the half year ended September 2018, APL recorded a total income of Rs 116 billion and a net loss of Rs 1.36 billion.

Besides the planned capacity addition, APL has been scouting for opportunities to acquire power generation assets that are value accretive in order to grow inorganically. It is, reportedly, favourably placed in the acquisition of three stressed assets – Coastal Energen Private Limited (1,200 MW Mutiara TPP), KSK Mahanadi Power Limited (3,600 MW Akaltara TPP) and GMR Chhattisgarh Energy Limited (1,370 MW TPP) under the Scheme of Asset Management and Debt Change Structure (SAMADHAN).  In November 2014, APL had announced its plans for the acquisition of a 600 MW coal-based TPP at Chhattisgarh of Korba West Power Company Limited (KWPCL), a company owned by Avantha Power & Infrastructures. APL extended advances of around Rs 24 billion by March 31, 2018 towards acquiring Avantha’s KWPCL plant. However, the acquisition is yet to be completed and insolvency proceedings were initiated against KWPCL in July 2018 under the Insolvency and Bankruptcy Code.

Going forward, the company expects an improvement in the domestic coal availability due to the newly signed FSAs and reduce reliance on imported coal to cut costs. Further, a likely positive resolution in the Mundra TPP issue will help the company improve its profitability. Even though operational performance is a cause for concern, with its impressive project execution skills, the company is expected to complete its under-development projects within the targeted timelines. Net net, APL is on track to realise its vision to generate 20,000 MW of power by 2020.