Bhutan is one of India’s key cross-border energy trading partners. Over the years, the two countries have been engaged in bilateral trading, with India importing a significant quantum of power generated from Bhutan’s hydropower projects. Bhutan currently has an installed capacity of 1.6 GW and is working on a number of hydropower projects (3.6 GW by 2022), which are expected to significantly increase the country’s power export potential over the next few years. According to the estimates of the Bhutan Electricity Authority, the country’s rugged topography promises an overall hydro potential of 30,000 MW, of which the techno-economic potential is about 22,280 MW.

A look at Bhutan’s hydropower development scenario so far, its capacity addition plans and prospects for cross-border bilateral trade….

Bhutan’s techno-economic potential is spread across the eastern, central and western basins, with 71 projects having an energy generation potential of 91,849 GWh.

At present, Bhutan has five hydro projects aggregating 1,606 MW under operation, of which three – Chukha, Kurich and Tala – have been developed with assistance from the Indian government under bilateral cooperation. The total installed capacity of the five projects represents 6.76 per cent of Bhutan’s techno-economic potential. Annually, these five projects generate about 7,732 MUs of energy, of which 5,502 MUs is exported. About 71 per cent of the hydro energy being generated is being exported by Bhutan. However, during the months of January-March, the country also undertakes small imports from India during peak hours.

The Basochhu I and II power plants have been developed with bilateral assistance from Austria. The 126 MW Dagachhu power plant, which is based on the public-private partnership model, has been developed by Druk Green Power Corporation Limited, the National Pension and Provident Fund and Tata Power. The entire energy generated from the Dagachhu plant is being exported. 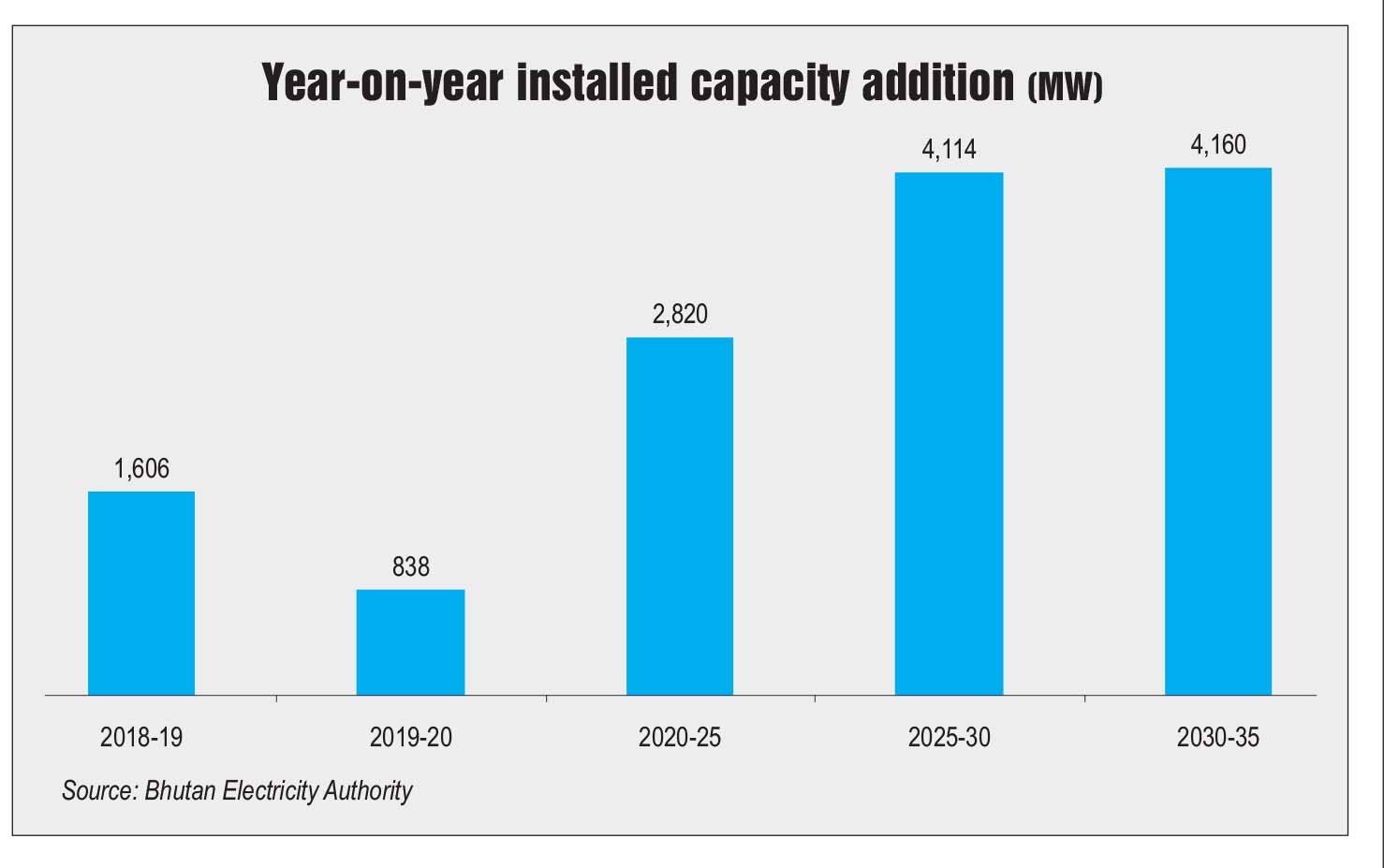 Projects in the pipeline

Bhutan has about seven hydro projects with an aggregate installed capacity of 8,164 MW in the pipeline. Of these, detailed project reports (DPRs) have been completed for five projects – the 2,585 MW Sankosh project, the 1,125 MW Dorjilung project, the 570 MW Wangchhu project, the 770 MW Chamkharchhu I project and the 180 MW Bunakha project. Meanwhile, DPRs are under preparation for the 404 MW Nyera Amari (I and II) and 2,640 MW Kuri-Gongri projects.

Bhutan has faced several challenges in hydropower development over the years. The Himalayas, being young fold mountains, have led to various geological surprises during project construction, resulting in delays in completion and cost overruns. Also, the steep rugged mountains have a disadvantage in terms of building run-of-the river projects. However, being sparsely populated, the advantage is that fewer human settlements are affected by the projects.

As hydropower projects are capital intensive and have a long gestation period, raising funds has been difficult. This was witnessed in the Dagachhu power project, which was expected to come into operation by 2013, but was delayed by two years and the cost was 60 per cent higher than that expected.

Another risk experienced in the country pertains to the intermittency in the river waters, as they are glacier-fed and so, the quantum of water they carry is affected by climatological factors.

While cross-border trading makes strong business sense for both countries, a challenge that needs to be tackled is the issue of open access. “Open and non-discriminatory access to transmission systems will increase the opportunities for electricity trade. Such trading will facilitate better utilisation of resources through load and time differences. This will also enable better peak load management across the countries, which are in different time zones,” says Samdrup Thinley, chief executive officer (CEO), Bhutan Electricity Authority. He adds that there must be a consensus on establishing a forum for South Asian electricity regulators. “Such a forum will help sort out the technical issues associated with cross-border collaborations like harmonising of grid codes to ensure reliable interconnected operation, transmission pricing, capacity building in load forecasting, scheduling and despatching areas, among other things,” he concludes.

Based on a presentation by Samdrup Thinley, CEO, Bhutan Electricity Authority, at a recent Power Line conference