The Power Finance Corporation (PFC), the lead financier in the Indian power sector, is exploring new growth avenues. With the changing business environment, the company has realigned its strategy to maintain its dominant position in the country’s power financing space. It is now funding newer segments such as renewables and waste-to-energy (WtE), and sourcing funds from diverse sources to lower its borrowing costs. The company is also seeing some progress in the resolution of stressed assets in its books.

The year 2017-18 turned out to be remarkable for PFC and the growth momentum continued in the first three quarters of 2018-19 as well. The company’s profit after tax (PAT) reached Rs 58.55 billion in 2017-18, recording a significant growth of 175 per cent. Further, it recorded PAT of Rs 48 billion during the nine months ended December 2018. “The company is delivering on the promises made in the past. It will continue to focus on its top line and deliver growth in the future as well,” said Rajeev S. Sharma, chairman and managing director, PFC, at a recent press meet held in Mumbai.

As of December 31, 2018, the company’s loan assets stood at Rs 2,812.62 billion, the majority (72 per cent) of which came from the generation segment. Assets from the distribution segment accounted for 19 per cent, while transmission and other segments accounted for 8 per cent and 1 per cent respectively. In terms of ownership, 83 per cent of the loan assets belonged to the government sector and the rest were owned by the private sector. The company disbursed Rs 451.34 billion during April-December 2018, about 20 per cent higher than the Rs 375.62 billion disbursed during April-December 2017. 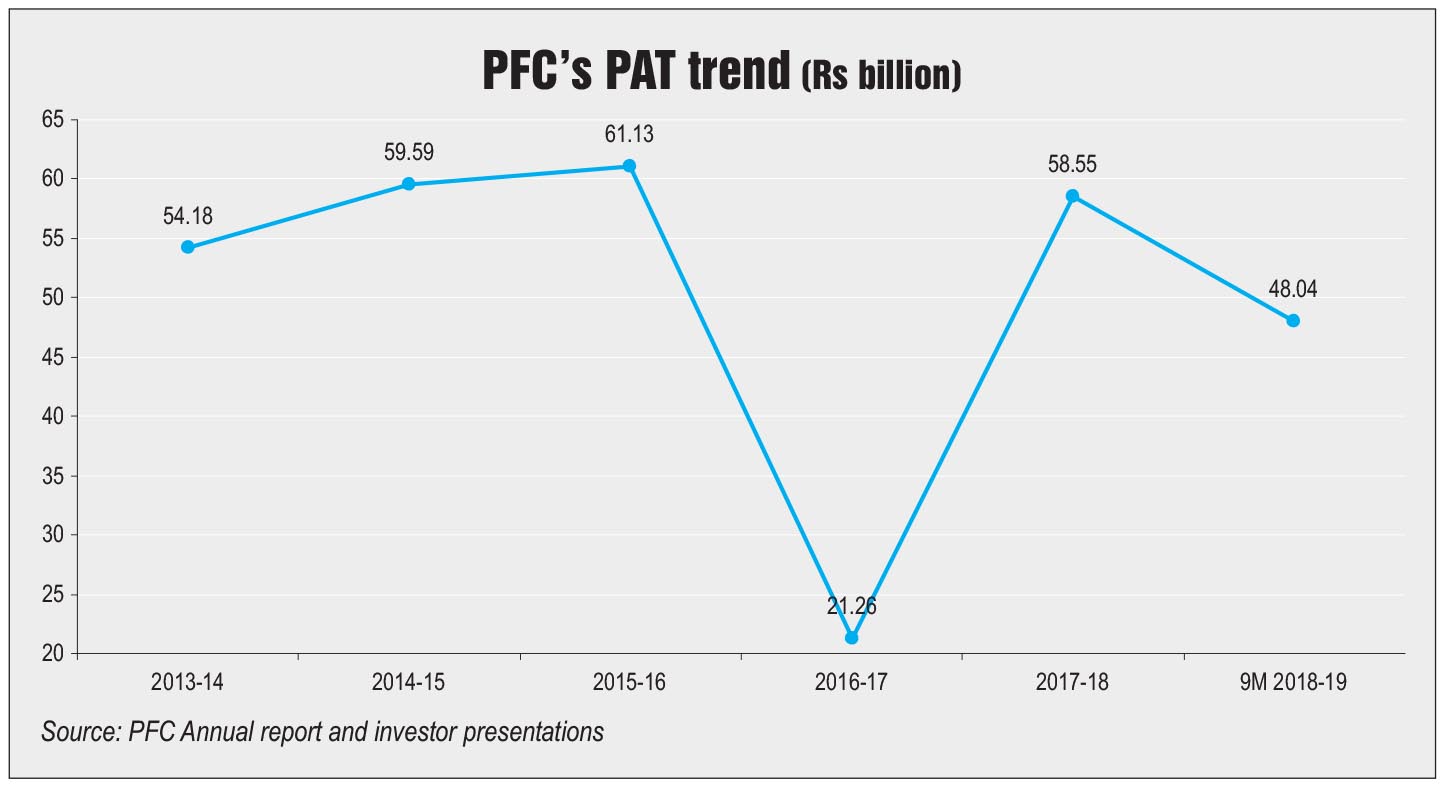 PFC’s business from the renewable segment increased from Rs 15.31 billion in April-December 2017 to Rs 51.37 billion in April-December 2018, a huge jump of 235 per cent. Sharma remarked, “With the continuing focus of the central government on renewables, the sector is bound to play a major role in the years ahead as the country looks to meet its energy needs. PFC is increasing its footprint in the solar and wind segments by leaps and bounds.”

PFC has been making continuous efforts to resolve the stressed/non-performing assets (NPAs) in its books. Its net NPAs reduced by 18.5 per cent to reach Rs 206 billion in 2017-18. The share of NPAs as a percentage of gross loan assets reduced to 7.39 per cent in March 2018 from 10.3 per cent in the previous year. From April to December 2018, the share of NPAs fell even further to 4.55 per cent. Sharma says, “We have not added any NPA in the December 2018 quarter and have no NPAs in the government sector. Further, the government has been taking various steps related to fuel supply and power purchase agreements (PPAs) for stressed assets and these initiatives will help in fetching better valuations of projects undergoing resolution.”

As of December 2018, the company’s NPAs stood at Rs 282.36 billion in the private sector, for which 52 per cent provisioning has been carried out. Of the total NPAs, 16 projects worth Rs 236 billion were at the National Companies Law Tribunal (NCLT), 10 projects were being resolved outside the NCLT, while a resolution had been reached for one project.

Earlier, PFC had announced that GVK Rattle, one of the company’s borrowers, has been servicing debt for its asset for the past 11 months. This loan asset is expected to be upgraded from an NPA to a “standard asset” in the coming quarter (with a provision reversal of Rs 6 billion). Further, 100 per cent recovery of the principal amount (Rs 14 billion) has been offered by its other three borrowers, Dans Energy, Shiga Energy and Essar Transmission. “We are currently negotiating a better deal with them,” notes Sharma.

For Essar’s Mahan project, the promoter has given a resolution offer but the lenders including PFC have received another offer, which is significantly higher, and the two offers are under evaluation. For the 1,440 MW RKM Powergen project, in which PFC has an exposure of Rs 51.55 billion, positive developments have taken place on the power purchase front, with PPAs being signed with Chhattisgarh as well as for the MoP’s pilot scheme. This is expected to improve the project’s valuation.

PFC has been diversifying its borrowing sources. The company’s foreign currency borrowing portfolio has increased from only 4 per cent two years ago to 12 per cent at present. “The company has successfully established itself in the Asian market and recently tapped into the US market where it has received a positive response,” said Sharma. In 2017-18, the company raised $1,659 million funds through foreign currency borrowings comprising $400 million through green bonds, $800 million through syndicated loans, and $459 billion through FCNR(B) (foreign currency non-resident) loans. Also, in July 2018, PFC received approval to raise 54EC capital gain exemption bonds, which serve as a cost effective funding source for PFC. The company has raised over Rs 5 billion from these bonds. 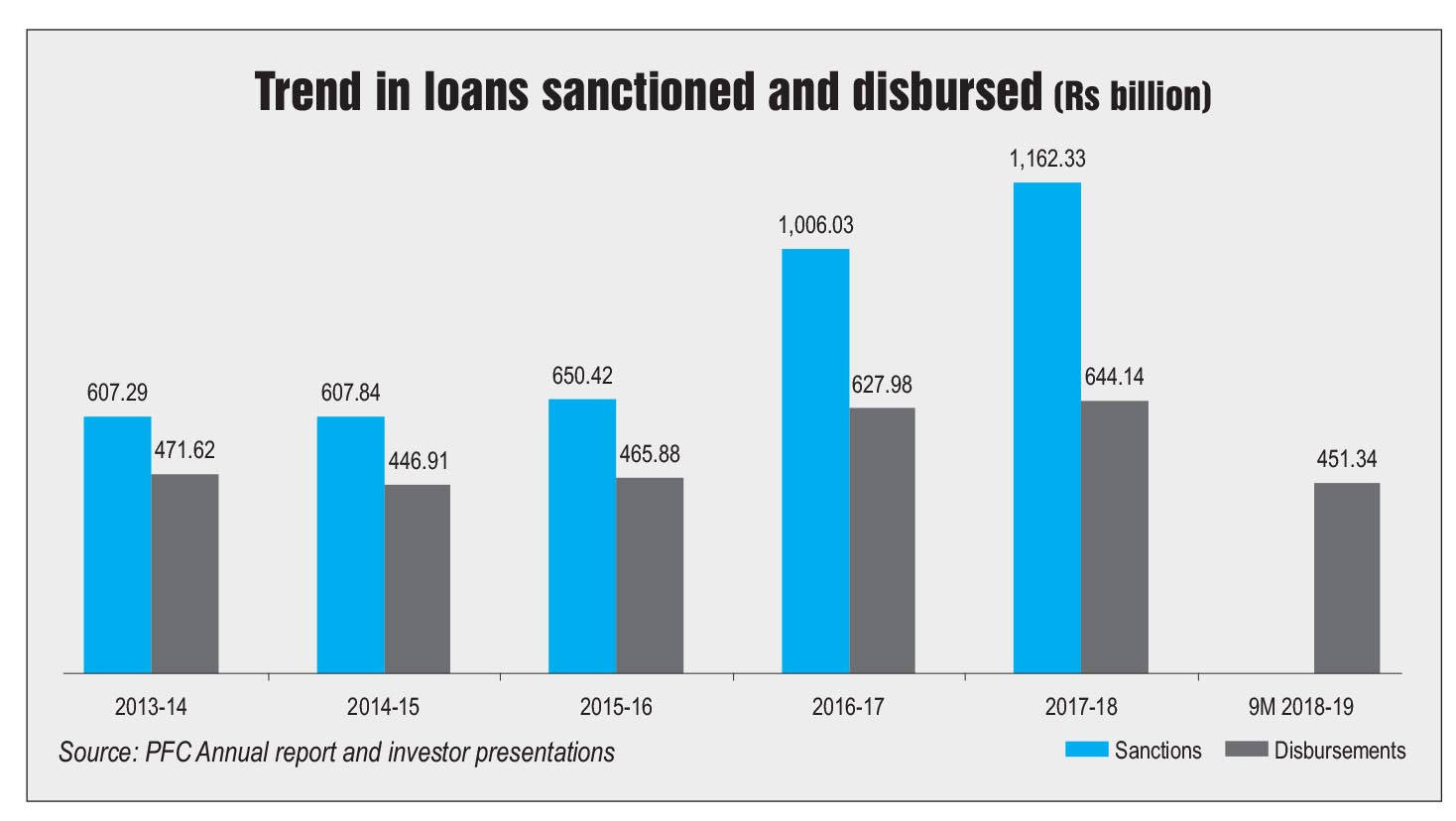 In December 2018, the cabinet gave in-principle approval to PFC for the strategic sale of the central government’s share in REC Limited along with the transfer of management control. “PFC expects to benefit from REC’s widespread geographical reach and its expertise in the transmission and distribution space,” notes Sharma. The company has received all regulatory approvals, from the Securities and Exchange Board of India, the Competition Commission of India and the Reserve Bank of India (RBI), for the deal and plans to close it by March 31, 2019.

The actual transaction price will be publicised once the modalities of the deal are finalised by PFC in discussion with the central government. Also, PFC is not considering extending an open offer to minority shareholders. The funding is likely to be through internal accruals and/or debt. PFC’s current focus is on completing the acquisition deal and the timelines for the merger will be finalised after that.

Post the acquisition, PFC’s capital adequacy ratio is likely to be affected as it will have to reduce its investment in REC, which is exceeding 10 per cent of net-owned funds from Tier I capital. This is required under RBI guidelines. However, PFC is continuously taking steps to ensure that its capital adequacy ratio adheres to regulatory thresholds post the deal.

In June 2018, PFC provided a loan of Rs 2,900 million for the Ramky Group’s 24 MW Bawana WtE project in Delhi, marking its entry into WtE financing. Further, in June 2018, the company extended an additional financial assistance of Rs 26.26 billion to Rajasthan Rajya Vidyut Utpadan Nigam Limited to support the utility’s effort to comply with the new emission norms.

PFC expresses confidence in the government’s efforts to resolve stressed assets and shore up power demand through schemes such as Saubhagya, e-mobility programmes, pilot power procurement, etc. In addition, the company intends to diversify its loan portfolio and fund projects such as sewage treatment plants, coal mining, railway electrification, smart cities, EV charging and battery manufacturing. Net, net, PFC is quite optimistic about the future funding potential in the power sector.