Smart grid development is expected to transform the Indian power sector into a secure, adaptive, sustainable and digitally enabled ecosystem, which provides reliable and quality energy for all, with active participation of stakeholders. To realise this vision, the Ministry of Power (MoP) has taken several initiatives such as setting up the India Smart Grid Task Force (2010) and the India Smart Grid Forum (2011) for providing policy direction to smart grid initiatives and accelerating the development of smart grid technologies, undertaking smart grid pilot projects (2012) to test and showcase various smart grid functionalities, and launching the National Smart Grid Mission (NSGM), in 2015, to plan and monitor the implementation of policies and programmes. The first phase of NSGM ended in March 2017 and the mission was extended to the second phase (April 2017 to March 2020). A total outlay of Rs 9.9 billion is estimated to be earmarked for Phase-II. Of this, Rs 9.38 billion (30 per cent of this will be government grant) will be used for the development of smart grid pilot projects.

The MoP along with the Smart Grid Task Force had shortlisted 14 smart grid pilot projects across different locations in India. Of these, 10 smart grid pilot projects and one smart city research and development platform were sanctioned, with nearly 50 per cent funding support from the MoP.  The key functionalities tested in these pilots include advanced metering infrastructure (AMI), outage management system (OMS), peak load management (PLM) and power quality management. So far, seven of these projects have been completed, while the others are at various stages of implementation.

Under the NSGM, five projects are under implementation, two in Chandigarh and one each in Odisha, Kerala and Jharkhand, entailing a total project cost of Rs 6,858 million. Apart from this, two projects at Amravati and Congress Nagar were surrendered by Maharashtra State Electricity Distribution Company Limited (MSEDCL) in December 2018. 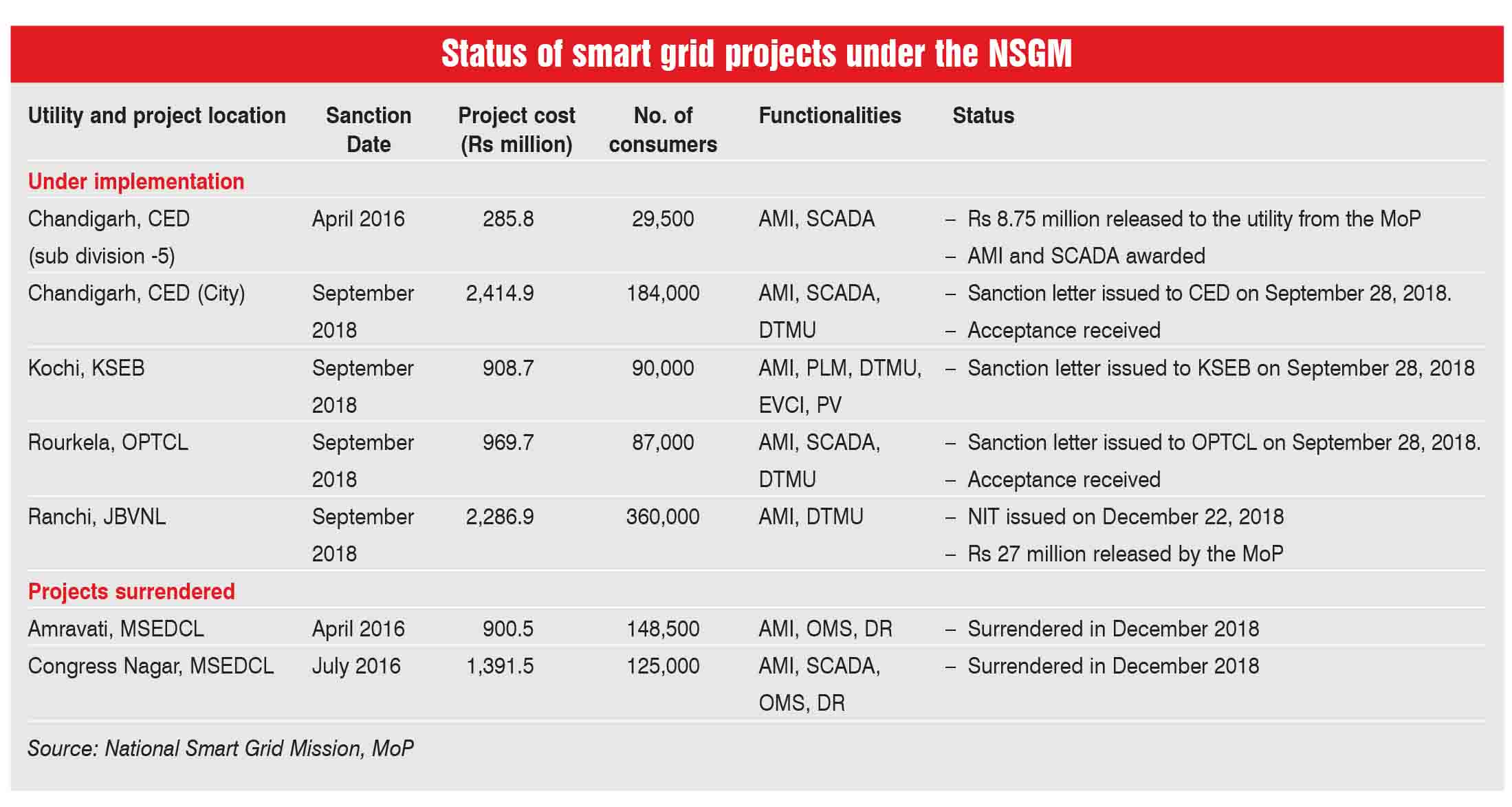 The pilot projects sanctioned by the MoP are being implemented across Assam, Gujarat, Himachal Pradesh, Haryana, Karnataka, Punjab, Telangana, Tripura, Puducherry, Uttar Pradesh and West Bengal, at a total cost of Rs 2.9 billion (including Rs 1.3 billion funding support from the government). All projects have been partially funded by the MoP, except the project developed by Uttar Haryana Bijli Vitran Nigam (UHBVN), which was completely funded by the New Energy and Industry Technology Development Organisation (NEDO).

Other projects are at advanced stages of implementation and are expected to be commissioned in the coming months. Under the TSSPDCL project in the Jeedimetla Industrial Area of Telangana, all single phase meters and automation components have been installed. The control centre is yet to be commissioned. In the Uttar Gujarat Vij Company (UGVCL) project, all meters and distributed control units (DCUs) have been installed and are already communicating with the data centre. The user acceptance test (UAT) is under progress. Under the Assam Power Distribution Company Limited (APDCL) project in the Guwahati distribution region, smart meters and DCUs have been installed while smart grid system integration with the Restructured Accelerated Power Development and Reforms Programme (R-APDRP) is in progress. 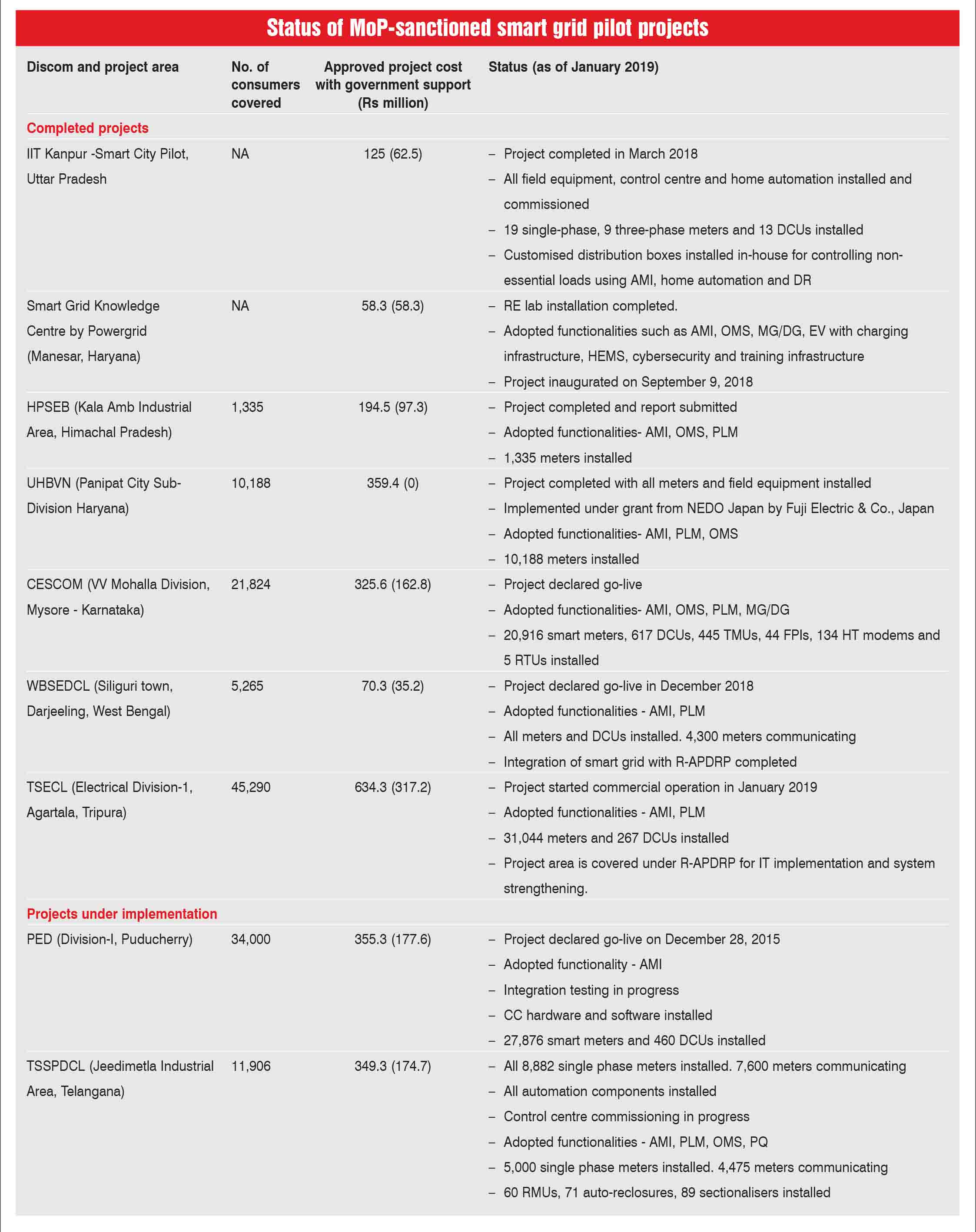 The NSGM projects are under implementation at five locations – subdivision-5 (Chandigarh), the entire city of Chandigarh (excluding sub division-5), Kochi city in Kerala, Ranchi city in Jharkhand and Rourkela city in Odisha. These projects entail an aggregate investment of Rs 6.86 billion, 30 per cent of which is funded by the government. Bids are being awarded for various project components such as AMI, supervisory control and data acquisition (SCADA), distributed generation, demand response (DR) and electric vehicles (EVs). The smart grid project in Chandigarh is being implemented by the Chandigarh Electricity Department (CED) at a cost of Rs 285.8 million. The utility floated the tender for SCADA and AMI implementation in December 2017 and the project was awarded in October 2018. Other projects were sanctioned in September 2018 but  the tenders are yet to be issued.

Key takeaways and the way forward

There have been delays in arranging counterpart funds (50 per cent for pilot projects/70 per cent for NSGM projects) from own resources. In addition, there are procurement and contractual issues. Utilities must adopt enabling provisions in contracts to select vendors with proven capabilities and allow experienced global players to participate (independently or through consortiums/joint ventures with domestic players).

Further, the utilities have been focusing only on equipment deployment and technology demonstration. As a result, not much progress has been seen on the process redesign, and change management fronts. The key issues faced in the implementation of smart grid projects pertain to interoperability, the need for extensive planning of grid architecture, lack of skilled manpower, delays in investment approvals, lack of innovative business models, high costs and absence of required support from consumers.

The assessment of the progress so far is expected to help the utilities in executing smart grid technologies more efficiently in the future. This will also enable utilities to identify the best technology and practices. Going ahead, there is a need to develop innovative financial and business models to implement smart grid projects. More pilot projects are likely to be initiated under the NSGM with renewed funding under Phase-II of the programme. Meanwhile, more regulatory support is needed for time-of-day metering, connect/disconnect, improvement in operational efficiency and loss reduction, etc. This will be crucial for facilitating the deployment of smart grid technologies.