Hydropower development across the states has been tardy, despite the immense potential. While Himachal Pradesh and Uttarakhand have utilised 62 per cent and 29 per cent of their hydropower potential respectively, Arunachal Pradesh, the state with the highest potential, has exploited only 6 per cent so far. The development of hydro projects across the states faces major time and cost overruns, primarily owing to delays in obtaining environmental and forest clearances, geological surprises and lack of funds.

That said, there have been some positive developments at the state level. These include the Supreme Court’s August 2018 judgement allowing construction of the stalled hydroelectric project (HEP) in Uttarakhand, the amendments in Himachal Pradesh’s hydropower policy, (which make the state’s hydropower segment more investor-friendly), and the National Green Tribunal’s (NGT) green signal to the Subansiri Lower HEP and Dibang HEP in Arunachal Pradesh, which is expected to result in the resumption of work at these mega projects.

With regard to the total hydropower potential (above 25 MW, as per the assessment studies), the country’s potential stands at 145.32 GW as of December 2018. State-wise, Arunachal Pradesh has the highest potential at 50.06 GW (accounting for 34 per cent of the country’s total hydro potential), followed by Himachal Pradesh with a potential of 18.54 GW (13 per cent) and Uttarakhand with 17.99 GW (12 per cent). However, as of December 2018, nearly 94.7 GW of hydro capacity is yet to be taken up for construction. This represents 65 per cent of the total identified capacity. State-wise, around 50 per cent of the untapped capacity is located in Arunachal Pradesh (46,805 MW), followed by 13 per cent in Uttarakhand (12,752 MW) and 9 per cent (8,158.5 MW) in Jammu & Kashmir. 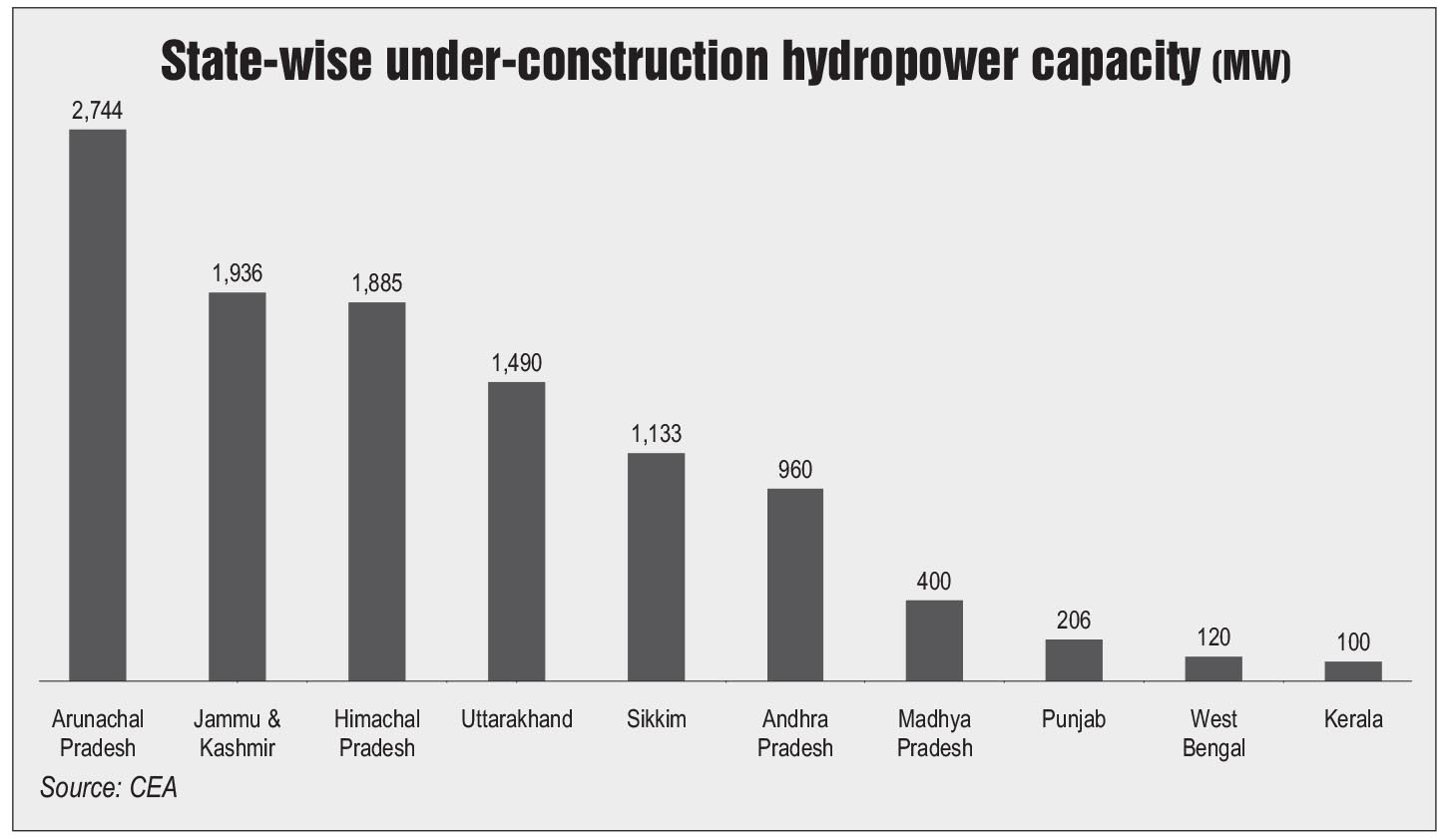 Bringing much relief to the development of hydro projects in Uttarakhand is the Supreme Court’s August 2018 judgement allowing the construction of stalled HEPs in the state. The apex court, however, directed the state government to ensure that there are proper waste disposal sites before restarting construction. This was in response to the high court order of June 2018, imposing a stay on the construction of all HEPs in the state due to improper muck disposal by developers. This, in turn, was in line with the notification of the Ministry of Environment, Forest and Climate Change released in December 2012, prohibiting the development of HEPs in the Bhagirathi eco-sensitive zone, and the Supreme Court’s blanket ban on HEP construction following the flash floods in June 2013. Apart from the restrictions on the construction of HEPs, Uttarakhand faces various issues and challenges in hydropower development. These include geological surprises cropping up in the development of projects in the young Himalayan terrain, unpredictable drought or heavy rainfall conditions, and natural soil erosion. These lead to significant time and cost overruns in the development of HEPs.

One of the key developments pertaining to hydropower development in Himachal Pradesh is the amendment to the state’s hydropower policy approved in May 2018. Reportedly, the amendment aims to revive 737 stalled projects aggregating around 5 GW of capacity and attract investors for new projects. The amendment to the policy has rationalised the royalty rates for the allotment of new projects. Further, in the case of the already allotted hydro projects, the amendments defer 12 per cent free power for the first 12 years of operation. Apart from this, the amendment has made it mandatory for the Himachal Pradesh State Electricity Board to purchase power produced by HEPs with a capacity of up to 10 MW. Further, the generic tariff applicable to HEPs up to 25 MW will be from the date of commissioning and not from the date of the implementation of the agreement. In addition, wheeling charges/ open access charges have been waived for HEPs up to 25 MW of capacity.

The new policy has been welcomed by private investors. JSW Energy’s 240 MW plant at Kuther in Himachal Pradesh had failed to take off over unfavourable policy issues and for want of a long-term power purchase agreement (PPA). However, with the amendment to the state hydro policy, the company is now looking to revive the project and is hoping to sign the long-term PPA for the project soon.

With regard to hydropower development in Arunachal Pradesh, in November 2018, the NGT rejected appeals stalling the development of the two giant-sized HEPs in the state – the 2,000 MW Subansiri Lower HEP and 2,880 MW Dibang HEP. In the case of the Subansiri Lower HEP, in November 2018, the NGT rejected an appeal against the constitution of a three-member expert committee to study the HEP on the border of Assam and Arunachal Pradesh. The expert committee held a meeting in Delhi and also visited the projects. Its report is likely to come out shortly, which will clear the deck for the project’s implementation. Meanwhile, in the case of the Dibang HEP, the NGT rejected the appeal against the government for granting environmental clearance to the project. The government has also sanctioned the pre-investment approval amounting to Rs 160 billion for the Dibang project.

The state has a large quantum of untapped hydropower potential, and has recently obtained approval of investment sanction for the construction of the 624 MW Kiru HEP. The project, entailing an investment of Rs 42.87 billion, would be developed by Chenab Valley Power Projects Private Limited, which is a joint venture (JV) company of NHPC Limited, the Jammu & Kashmir State Power Development Corporation (JKSPDC) and PTC India Limited. The project is scheduled to be completed in four and a half years.

The development of hydro projects in Jammu & Kashmir has been hampered owing to militancy and civil unrest, as well as border tensions with Pakistan. The 850 MW Ratle HEP in Kishtwar district is awaiting clearance from the World Bank following a dispute between India and Pakistan under the Indus Water Treaty. GVK Power and Infrastructure Limited had secured the project in 2010 for development for 35 years. GVK, however, left the project midway in 2014, owing to a row over high tariff rates and a JV company between NHPC Limited, and JKSPDC had signed a contract to implement the project in September 2018. 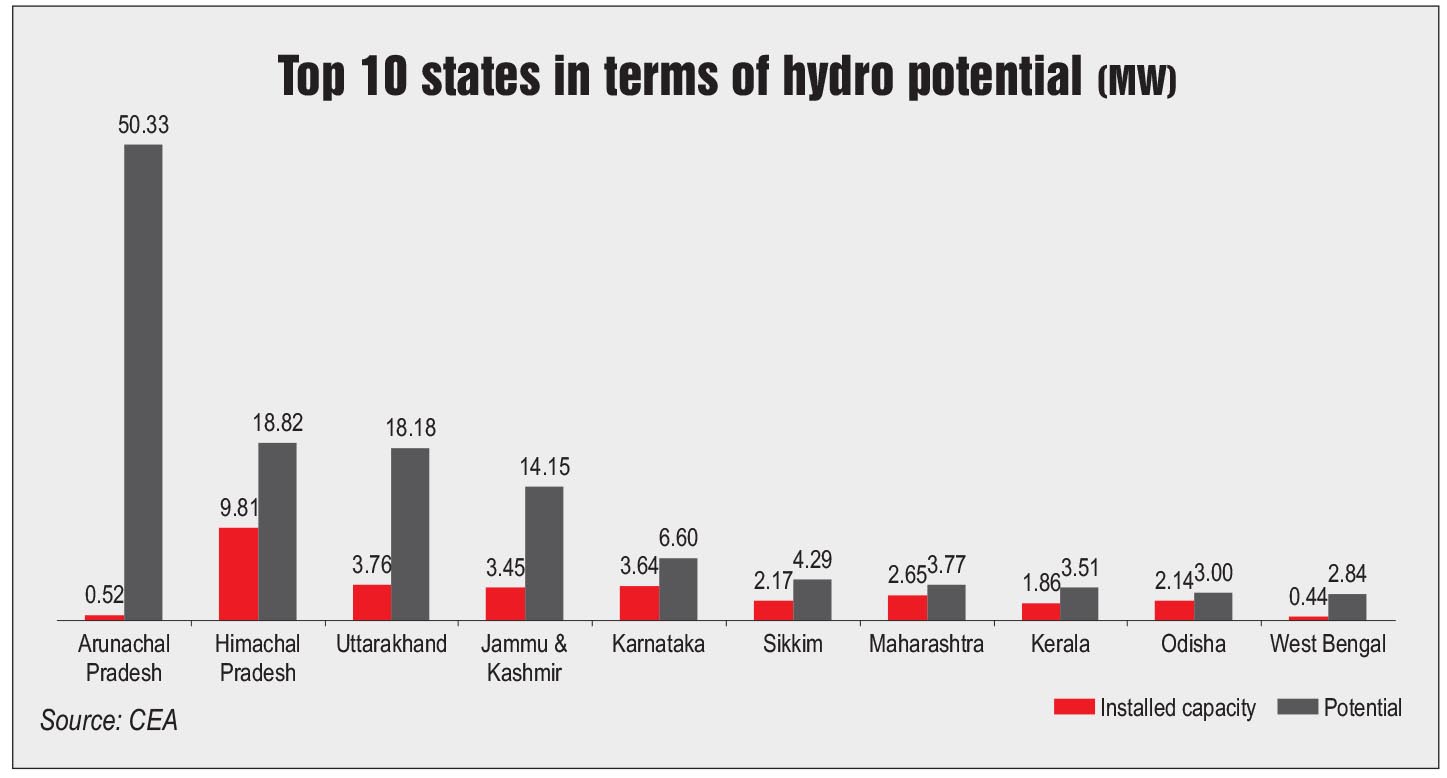 As of December 2018, around 10.97 GW of hydropower capacity is at various stages of development in the country. State-wise, Arunachal Pradesh has the highest under-construction hydro capacity at 2,744 MW (25 per cent of the upcoming capacity), followed by 1,936 MW (18 per cent) in Jammu & Kashmir and 1,885 MW (17 per cent) in Himachal Pradesh.

However, issues pertaining to environmental clearances, geological and hydrological surprises, and policy constraints need to be addressed. The private sector too could play a major role in the development of hydropower. Above all, the state governments need to play the role of facilitators by providing conducive policy measures, streamlined clearances and assistance in pre-feasibility studies. All this would go a long way in giving comfort to developers and a fillip to segment growth.