The clock is ticking fast for Britain’s exit from the European Union (EU), with Brexit officially scheduled to take place on March 29, 2019, two years after the UK invoked Article 50 of the Treaty of the European Union. (Article 50 articulates the procedures for member states to withdraw from the EU and allows for a two-year negotiation of the terms of withdrawal and the future relationship structure on energy and trade regimes.) Several industry experts have analysed the impact of Brexit on the UK’s economy in general, and the electricity sector in particular, under various scenarios, namely, “hard Brexit” (where the UK exits sthe EU’s single market, which offers freedom for the movement of goods, services, capital and people across borders, and must trade with the EU under the World Trade Organization [WTO] rules), “soft Brexit” (where the UK remains part of the single market), and “no-deal”.

The UK’s electricity sector is closely intertwined with that of the EU through shared physical infrastructure (electricity and gas interconnectors), regulations, trade relations (market coupling with the EU’s internal energy market [IEM]) and a shared workforce. Under the “hard Brexit” or “no-deal” scenarios, the UK will not be a part of the IEM, which ensures free flow of power and gas between the EU countries. The UK is a net importer of electricity from the EU, with 6 per cent of its electricity supply being provided by the latter during 2018. In case the UK’s electricity system is decoupled from the IEM, trade will continue to take place but will be less efficient and more expensive for consumers. The associated costs for the UK in such a scenario are estimated to be in the range of GBP 500 million to GBP 1 billion annually.

The UK has various options of continuing energy trade with the EU (refer box). There is currently no agreement to replace the regulations that govern trade between the UK and the EU. A “no-deal” scenario looks most probable. Recent developments indicate that the UK may be forced to request for a three-month extension of the negotiating period to prevent a “no-deal” departure.

The UK is interconnected with continental Europe and Ireland through five high voltage direct current links, with an aggregate capacity of 5 GW. The latest interconnector, which started commercial operations recently, is the NEMO Link interconnector with Belgium. Further, there are at least eight projects with close to 9 GW of capacity that are under development. Of these, three interconnectors, namely, Eleclink and IFA2 (with France), and NSN (with Norway), are expected to come online by 2020 while the others are expected to be commissioned between 2022 and 2027. By 2022, electricity interconnectors with EU countries are expected to meet 35 per cent of the UK’s peak electricity demand.

Interconnectors play an important role in the UK’s electricity sector and its strategic planning. They help in increasing security of supply through flexibility and diversification, while reducing electricity prices for consumers and decarbonising electricity supply. The decarbonisation of the electricity sector will be vital for the UK irrespective of the Brexit outcome, as it is committed to reducing its carbon emissions by 80 per cent by 2050 under the Climate Change Act  of 2008, and interconnectors are the least-cost option for achieving decarbonisation.

Post-Brexit, the UK could be an extended associate member in the regulatory bodies of the IEM, that is, the European Agency for the Cooperation of Energy Regulators, the Council of European Energy Regulators and the European Network of Transmission System Operators for Electricity or Gas. However, the UK will have to comply with EU regulations without being able to influence it? This will be in contrast to the leading role played by the UK in the formulation of EU energy policies over the years.

Given that several of the proposed energy projects are being supported by EU funding, the UK’s exit from the IEM is expected to impact the availability of these funds. Post-Brexit, the UK will have limited access to EU funding sources such as the European Investment Bank, the European Fund for Strategic Investments, the Connecting European Facility, Horizon-2020 and the European Energy Programme for Recovery. 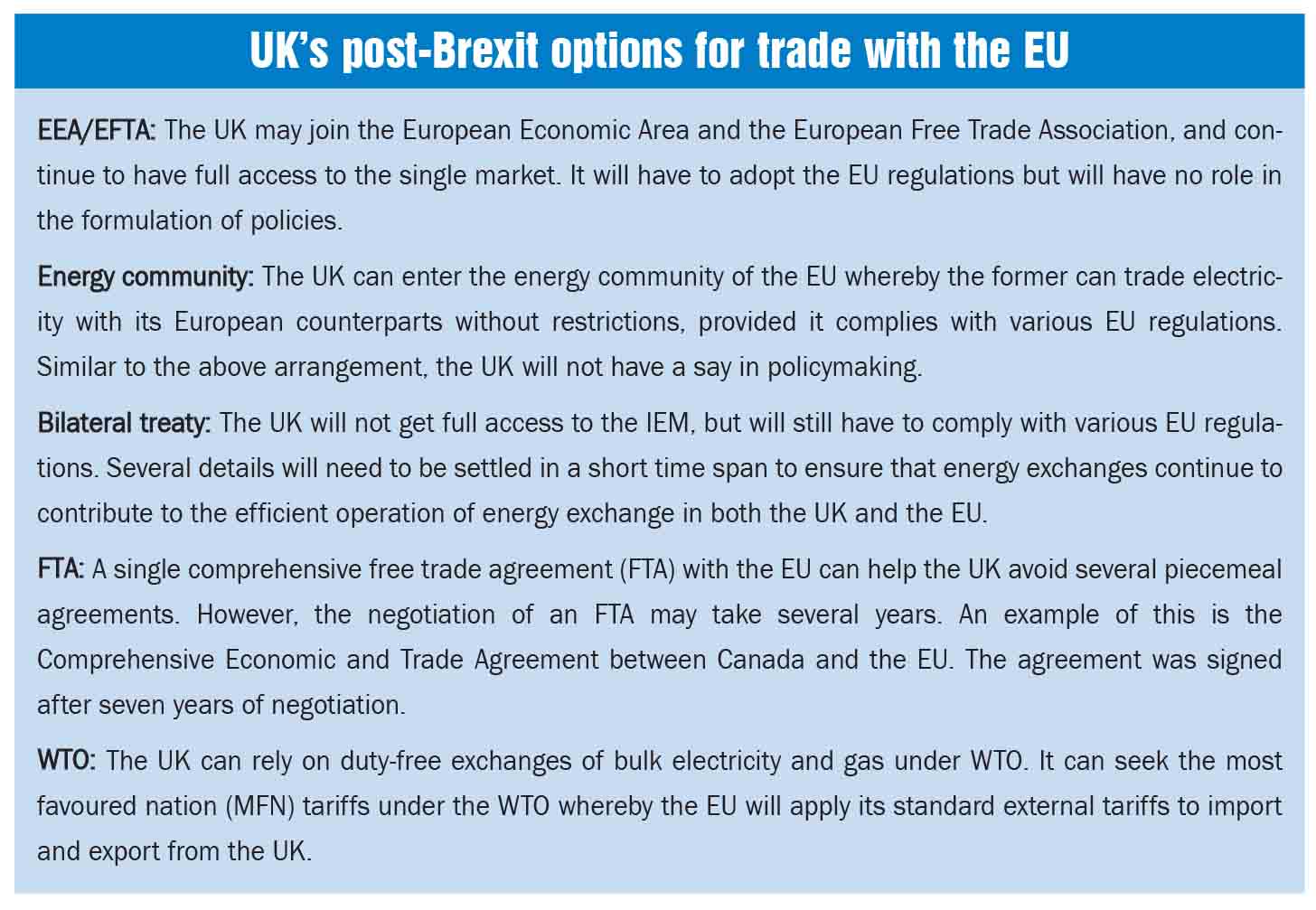 Electricity markets are complex service markets encompassing several aspects such as renewable energy sources support, capacity mechanism, wholesale market, and balancing and ancillary services. Trade partners that are outside the purview of the EU rules and institutions will only be able to export or import bulk electricity. This carries the risks of suboptimal despatch, lower market liquidity, less competitive pressure and imperfect investment signals. Therefore, keeping the IEM intact will be important for both sides.

If the UK leaves the IEM, it will not be able to participate in any cross-border exchange of capacity. This will result in an increase in capacity investments in the UK that will be paid for by UK consumers. Overcapacities in the UK may depress prices in the regional wholesale markets. From the EU standpoint, it should make sure that UK overcapacities do not undermine investment or despatch decisions in EU27.

Post-Brexit, the EU’s transmission system use fee will apply to the UK as a third country. Therefore, electricity trade costs will be higher, but it is not clear how expensive it is going to be. Interestingly, the imposition of such charges may suit some utility operators in the UK, particularly in the case of imports and the application of network charges at the source of origin.

Brexit will directly impact several European energy companies such as German E.ON and Innogy, French EDF and Spanish Iberdola, which are the UK’s biggest energy suppliers. Given that the UK will not be bound to EU state aid rules post-Brexit, EU companies present in the UK’s energy market will have to challenge regulatory decisions and state aid in favour of UK competitors in a UK court.

Nuclear power and withdrawal from Euratom

The UK’s nuclear sector will be impacted by its exit from the European Atomic Energy Community (Euratom), which facilitates trade in nuclear materials for peaceful uses of atomic energy through the creation of a European-scale industry. It could face additional costs on the transport of materials and technology as well as challenges in finding specialist energy personnel due to the post-Brexit immigration policy. Some experts, however, argue that the UK has the resilience to develop its own nuclear industry. It will also benefit from greater financial autonomy with respect to state aid that was earlier restrained by the EU rules.

The Integrated Single Electricity Market (I-SEM) integrates the markets of the Republic of Ireland and Northern Ireland. Ireland is connected to the IEM through the UK (Northern Ireland). If the UK exits the IEM, it will adversely impact Ireland, both economically and politically. Meanwhile, a part of the UK will remain subjected to EU laws through I-SEM. To avoid disruption to the I-SEM, the UK plans to consider all options for its future relationship with the EU on energy. 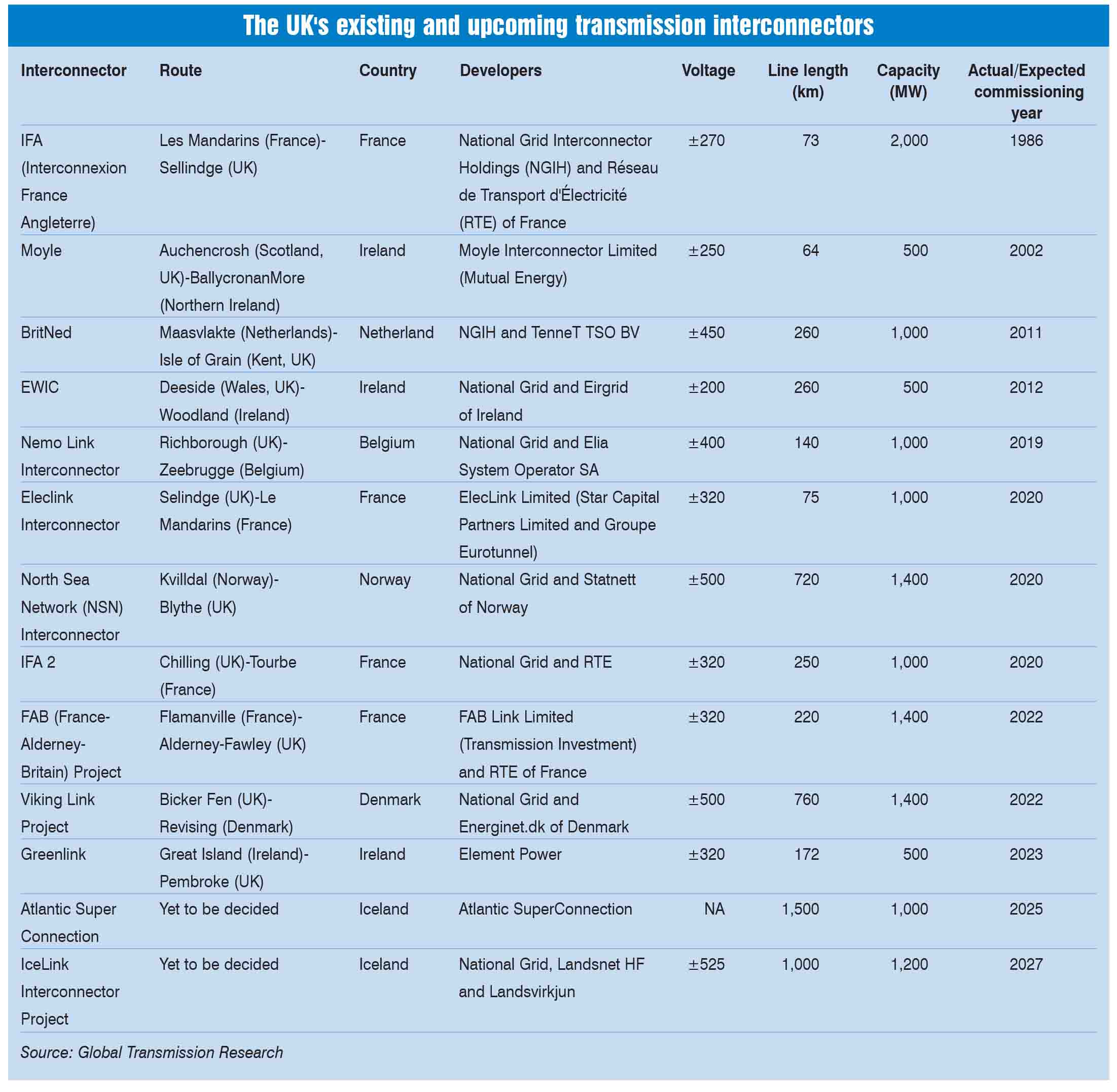 The two sides on the negotiating table recognise that the costs of reversing the energy market integration achieved over the past decade through market coupling and increasing interconnection capacity are high. For the UK, continuing the electricity market integration will require it to accept EU regulations with little or no say in it. In any case, post Brexit, the UK stands to lose access to significant funding for energy infrastructure from the EU. On its part, the EU would want to ensure that the exit costs are significant to deter similar actions by other member countries.

Regardless of the outcome, the UK will remain reliant on the electricity interconnectors with the EU, and trade with the IEM. The uncertainties regarding investments, legislations and regulations in a “no-deal” scenario will lead to higher costs for both sides and threaten the region’s energy security. The UK may look to extend the transition period to adjust regulations, contracts, working practices and IT systems. It will be desirable for both the UK and the EU to maintain high levels of cooperation in the energy space, given the interdependencies and shared energy goals.