The power transmission network is often referred to as the infrastructure of infrastructure. It is the backbone of the power sector, and any failure in the transmission network has the potential to disrupt power evacuation and hamper power supply to end-consumers. Therefore, timely, extensive and precise testing of transmission lines and cables is of paramount importance for maintaining stable and reliable power supply. In the case of overhead lines, fault identification is simpler and online tests are used for testing purposes. Although power cables offer many benefits such as minimising right of way (RoW), reducing electricity theft and improving route aesthetics, the time and costs involved in addressing disruptions or faults in underground cable systems are substantial.

In order to minimise network losses and RoW requirements, the use of extra-high voltage (EHV) and ultra-high voltage (UHV) lines such as 765 kV direct current transmission lines is gaining traction. For monitoring and fault detection in these lines, aerial line patrolling and drone-based monitoring are being used.

Therefore, in the case of underground cabling, a reliable and precise pre-location method, which entails determining the fault distance, is necessary for locating the cable fault quickly. Time domain reflectometry is one of the most commonly used methods for pre-location in underground cable systems. It locates and characterises deflections in the power flow inside a cable, which are caused by faults, joints, open connections, etc. The distance to the fault is measured on the basis of the time taken in the process, and the velocity of the pulse using time domain reflectometers. Other fault pre-location methods used are arc reflection, travelling wave, high-voltage bridge and voltage drop.

Another area of concern in underground cable systems is the fast pace of insulation deterioration. As time passes, cables’ insulation weakens, which increases the potential for a line fault.

A popular method for examining underground cables is the tan delta test. It is a diagnostic method of testing cables to determine the quality of the cable insulation. This helps in creating a systemised method to analyse aging of cables in the long run. It utilises phase shifts caused by displacement current, which is induced due to impurities in the insulation or the stress on cables. The cable insulation is subjected to a positive feedback process, increasing the risk of a temperature breakdown. Insulation properties change with time, and it is necessary that key parameters are tested accurately to ascertain the deterioration level of the insulation. Cables get damaged due to adverse installation conditions during the cable laying.

Apart from this, another popular method used to diagnose the health of cables, especially XLPE-insulated power cables, is very low frequency testing, which involves the application of AC voltage at a low frequency of 0.01-1.00 Hz, depending on the cable’s inbuilt voltage. The strength of the insulating material used in cables is tested using the dielectric withstand test, which verifies that the insulation of a product or component is sufficient to protect it from electrical shocks. 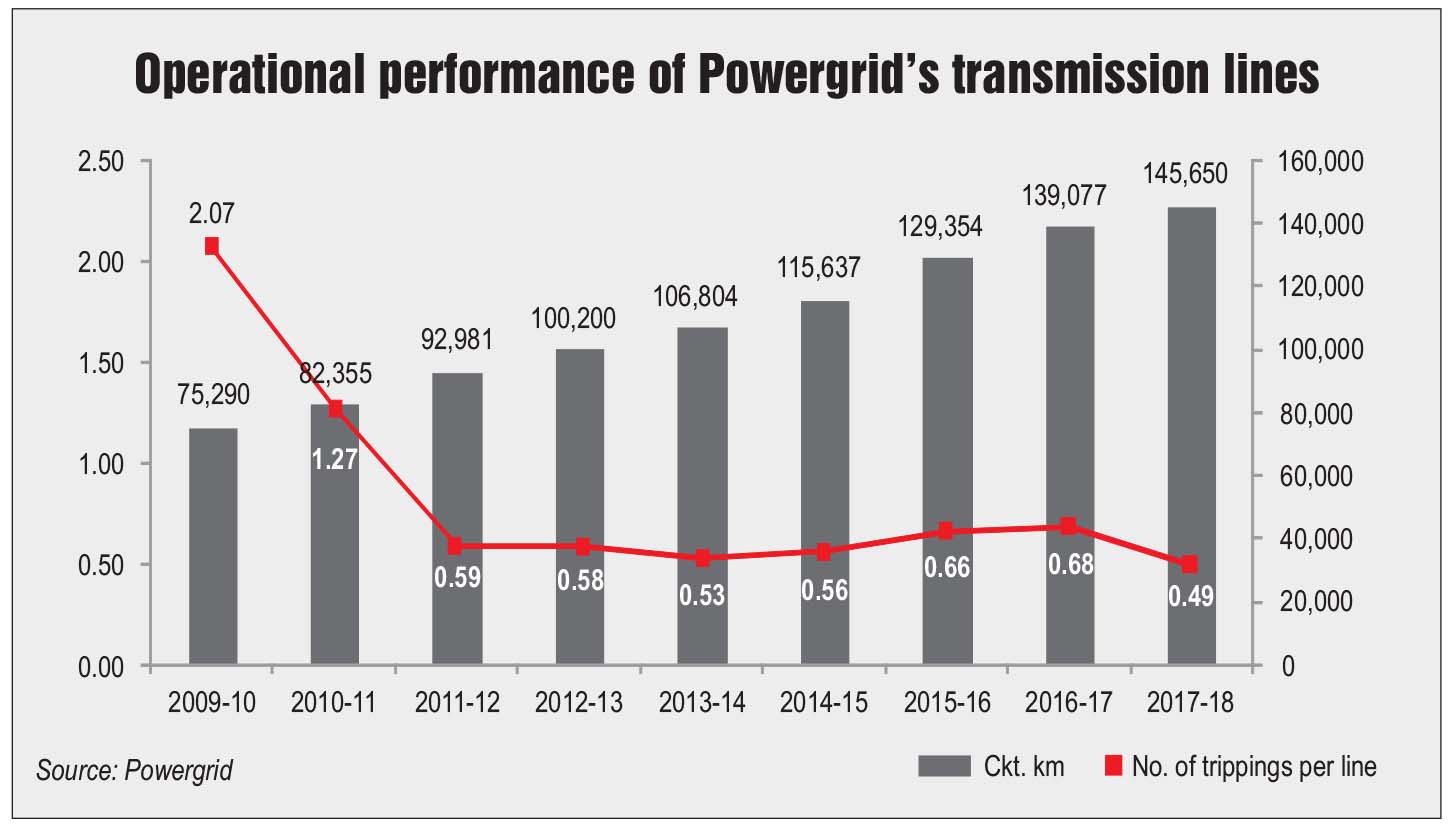 Overhead power lines are periodically inspected using both on-ground and helicopter-aided visual inspection. Factors including sun glare, cloud cover, close proximity to power lines, and rapidly changing visual circumstances make airborne inspection of power lines a particularly hazardous task. Overhead lines are more accessible than underground cables and can be tested  with the help of online tests. For example, punctures in insulation on live wires can be monitored using punctured insulator detectors. These are moved along live wires, and send readings to graphic displays, which detect any leaks in electricity by monitoring variations in fields. Other monitoring methods include distributed temperature sensor (DTS) and sheath current monitoring. Temperature detection is very important because the condition of insulation and the carrying capacity of a cable can be obtained by monitoring the temperature. A built-in DTS that uses optical fibre temperature sensor systems can measure the cable temperature on a real-time basis. Besides, it is anti-corrosive, is not susceptible to electromagnetic interference and has high sensitivity. Capacitive coupling sensors and other sensors are also used to detect partial discharge signals. However, a problem with online detection of partial discharge is that cross-bonding of transmission cables makes it difficult to identify from which phases a partial discharge signal has emanated.

To monitor the health of EHV transmission systems, aerial line patrolling is increasingly being deployed. Helicopters and, where clearances allow it, drones equipped with light detection and ranging (LIDAR) sensors, thermovision cameras, corona cameras, and high resolution video and digital cameras are deployed for identifying transmission line defects. Aerial line patrolling provides high resolution visual, corona and thermo vision images/videos of the transmission line corridor. It helps in identifying critical faults such as conductor damage, pollution on insulators and defective jumpers. Besides this, aerial patrolling is a very fast process and 100 to 150 km of line length can be covered in a day during clear weather conditions. Meanwhile, manual patrolling is a labour-intensive process and only about 4 km can be covered per day per team. Besides, under this, only the defects that are visible from the ground are noted.

Power Grid Corporation of India Limited (Powergrid) is undertaking aerial patrolling of its transmission lines to identify line defects. Helicopters equipped with gimbal-mounted light detection and ranging, thermo-vision cameras, corona cameras, high resolution video and digital cameras are being deployed to identify the defects and take corrective measures. Further, Powergrid has adopted an Android-based  application for providing a live update on data pertaining to the patrolling of the transmission system. It is an effective way to monitor critical infrastructure. A plan for patrolling each cycle can be created and monitored effectively through this app. Actual patrolling of each tower and defects rectification can also be ensured through the app. Apart from this, the company has been using drones for line surveillance. It had received a green signal from the Directorate General of Civil Aviation and the Ministry of Home Affairs in April 2016 for the use of drones. Drone surveillance systems have been deployed on the Ballia-Bhiwadi high-voltage direct current line and the Pune substation, among other sites. Drones allow aerial surveillance and have been more efficient than manual surveying of power lines. The constant video recording allows better assessment of faults in the existing lines. The drones are equipped with ultra HD cameras, which can take high resolution close-up photographs and videos of towers and their components. Reportedly, the cost of a drone varies from Rs 0.15 million to Rs 0.50 million apiece.

To conclude, maintaining a robust and reliable power transmission system with fault-free and healthy transmission lines and cables is of paramount importance for improving the power availability and accessibility in the country. Besides, this is particularly important in order to manage large-scale penetration of renewable energy sources into the grid as well as to meet the government’s target of providing 24×7 power for all.

The power transmission network has been constantly expanding to maintain uninterrupted transmission of power, provide evacuation infrastructure for power generation plants, and address regional demand-supply mismatches. Several new technologies have been in­troduced and incorporated in […]

The Mysuru smart grid project, being implemented by the Chamundeshwari Electricity Supply Corporation (CESC), is one of the 14 pilot projects being implemented with financial support from the Ministry of Power (MoP). The project covers […]