The second round of auction for procuring 2,500 MW of power from coal-based gencos under the central government’s Pilot Scheme II was launched in April 2019. The auction, which was open for generation companies with commissioned coal-based power plants but no power purchase agreements (PPAs), saw higher tariffs as well as higher supply bids being made as compared to the auction conducted earlier. The lowest bid price discovered in this round was Rs 4.41 per unit, 4 per cent higher than the Rs 4.24 per unit discovered in the previous year, while supply bids of 2,520 MW were received. Power Line takes a look at the scheme’s progress…

In April 2018, the Ministry of Power (MoP) issued guidelines for a pilot scheme to facilitate the procurement of aggregated power (2,500 MW for three years) from commissioned coal-based power plants through competitive bidding. PFC Consulting Limited (PFCCL) conducted the bid for the selection of projects on the DEEP e-bidding portal. PTC India, which was the aggregator, received bids for the procurement of 1,900 MW of capacity at a discovered fixed tariff of Rs 4.24 per kWh. In this round, the quoted tariff remained fixed for the three-year PPA period without any escalation. 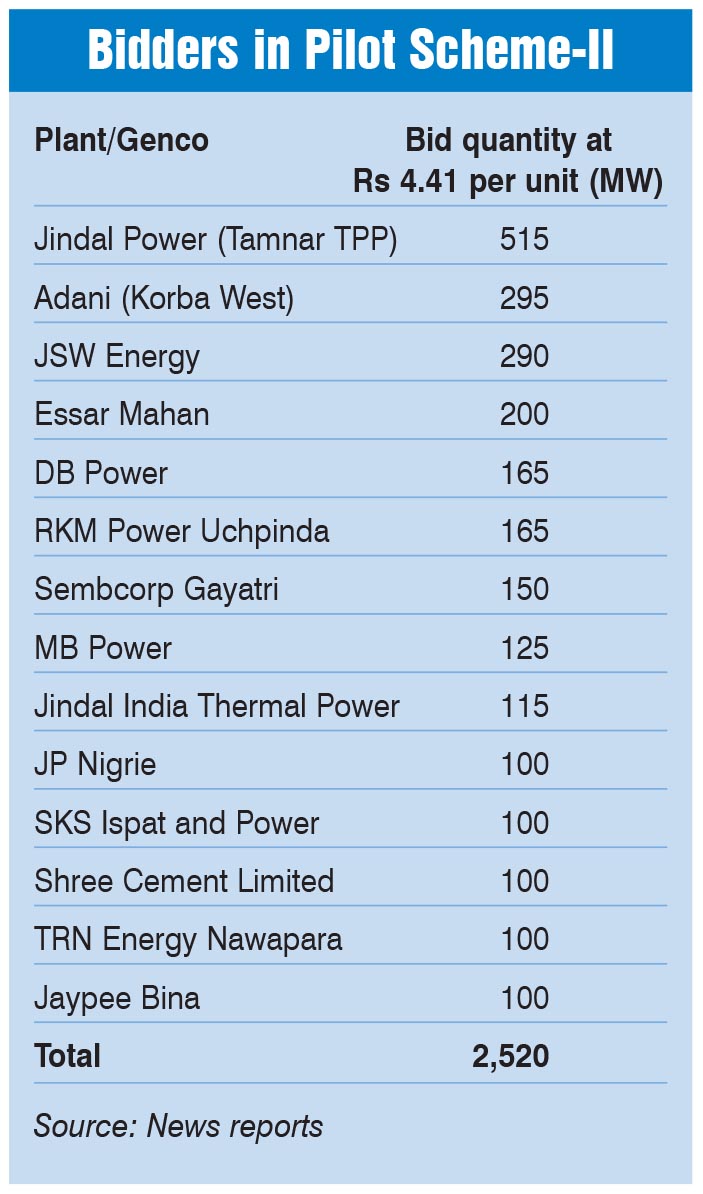 The MoP announced Pilot Scheme-II in February 2019 with PFCCL as the bid process coordinator and NHPC Limited as the aggregator. This phase entailed bidding for procuring  2,500 MW of power in the medium term for three years. However, some changes were made in the format of the new scheme in order to attract greater participation. For instance, variable charges were linked to inflation while in the previous round they were fixed for three years. Under the second phase, the variable charges will be escalated at the rate of 50 per cent of the wholesale price inflation. Also, the minimum offtake guarantee was increased from 55 per cent to 85 per cent. Further, for this round, the bidders were required to quote both variable charges and fixed charges whereas in the last round the fixed charges were kept at a nominal rate of 1 paisa per unit.

In the first phase of Pilot Scheme-II, bids aggregating 4,077 MW were received against the 2,500 MW offered in the auction, mainly owing to liberalisation of certain rules. As a result, the government was expecting a reduction in tariffs vis-à-vis the previous round of bidding in 2018. Subsequently, in the reverse auction that concluded on April 18, 2019, about 15 thermal power producers participated. Jindal Power Limited offered the highest quantity at 515 MW. Other bidders included Adani Korba West (295 MW), JSW Energy (290 MW), Essar Power Mahan (200 MW), DB Power (165 MW) and MB Power (125 MW). The lowest bid discovered in this round was Rs 4.41 per unit. The final tariffs are, however, expected to be Rs 4.70-4.80 per unit after the addition of transmission charges.

According to experts, a higher-than-expected tariff could lead to difficulties in buying for procurers of power under the current scheme given the weak financial health of discoms. More so, as a major portion of discoms’ demand is already tied up under long-term PPAs, the remaining can be met through competitive short-term options at the exchanges. For instance, the market clearing price (MCP) for the day-ahead market at the Indian Energy Exchange varied from Rs 2.76 per unit to Rs 4.69 per unit in April 2019 (till April 20, 2019). The average MCP stood at Rs 3.12 per unit in March 2019.

Also, while the scheme’s intent is positive, as it aims to provide relief to stressed assets, experts say that substantial gains may not be realised by power plants owing to the short duration (three years) of contracts. Net, net, the two schemes only provide a partial relief to about 4.4 GW of capacity out of the 15-16 GW of operational coal-based capacity without PPAs.

UDAY Impact: Short-term gains, but a long way to go

The Ujwal Discom Assurance Yojana (UDAY) was launched by the government in 2015 with the aim of providing a permanent solution to the problem of deteriorating discom finances. About 86 per cent of the scheduled […]

The Ministry of Power’s (MoP) ambitious ultra mega power project (UMPP) programme is in the doldrums. Launched in 2005, the programme envisaged the setting up of large coal-based power plants of about 4,000 MW each […]

Power Ties: Why Indian power companies are looking at the Bangladesh market

As investment opportunities in India’s  conventional power segment dry up, a growing number of power companies are looking at outbound investments and forays into new and emerging markets. In recent years, power-starved Bangladesh has become […]