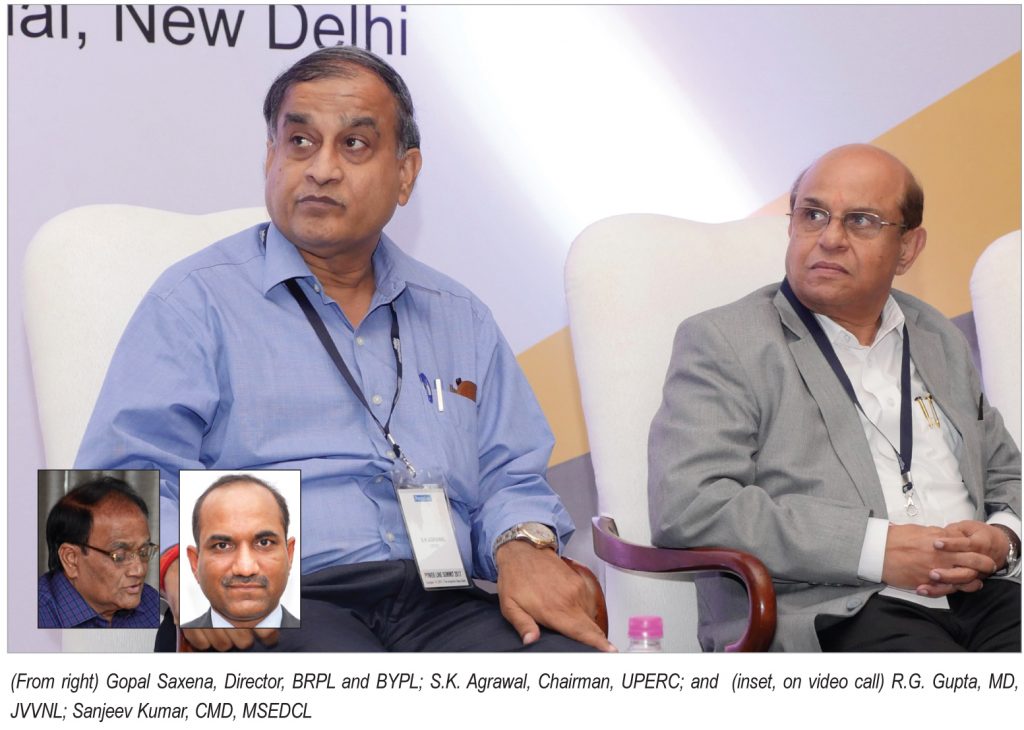 The Ujwal Discom Assurance Yojana (UDAY) was launched by the government in 2015 with the aim of providing a permanent solution to the problem of deteriorating discom finances. About 86 per cent of the scheduled debt of discoms has been transferred to the state governments or rescheduled by banks under UDAY. However, there is a significant scope for improvement in operational parameters such as aggregate technical and commercial (AT&C) losses, feeder metering and billing efficiency. In the session, “Impact of UDAY and the Way Forward for Discoms”, the heads of key discoms and regulatory commissions discussed the progress under UDAY and the challenges facing discoms. The panellists included S.K. Agrawal, chairman, Uttar Pradesh Electricity Regulatory Commission (UPERC); R.G. Gupta, managing director (MD), Jaipur Vidyut Vitran Nigam Limited (JVVNL); Sanjeev Kumar, CMD, Maharashtra State Electricity Distribution Company Limited (MSEDCL); and Gopal Saxena, director, BSES Rajdhani Power Limited (BRPL) and BSES Yamuna Power Limited (BYPL). An overview of the session…

UDAY has had a positive impact on discom finances, with a significant reduction in the interest cost. However, sector experts point out that the scheme cannot resolve the distribution segment’s issues merely by the takeover and restructuring of debt. Unless the scheme is followed through with concerted efforts to reduce AT&C losses and bridge the gap between the average cost of supply (ACS) and the average revenue realised (ARR), the discoms’ performance will continue to decline.

Of the 27 states/union territories covered under UDAY, only three or four have been able to reduce their AT&C losses below the target and bridge the gap between ACS and ARR. Also, the discoms’ dues payable to generators have increased from Rs 150 billion in May 2017 to Rs 185 billion at present, which is not a good sign for the sector.

JVVNL has immensely benefitted from UDAY, in terms of improvement in its financial performance. The utility’s annual interest cost has reduced to Rs 25 billion post UDAY from about Rs 100 billion. Further, due to tariff rationalisation, the discom’s revenue is now more than the power purchase cost and it is in a position to recover its expenditure. The cost of energy supplied is around Rs 6.8 per unit while the revenue realised is about Rs 7 per unit. With such encouraging developments, the utility is expected to reach break-even by the next year.

JVVNL’s AT&C losses have reduced by 6 per cent, as of September 2017. It aims to reach the target of 20 per cent by March 2018 and 15 per cent by March 2019. The utility’s financial losses have reduced to Rs 2.04 billion as of August 2017 from Rs 10.56 billion as of August 2016. Meanwhile, its net income has increased by Rs 7 billion this year, mainly on account of loss reduction and tariff increase.

The Uttar Pradesh state discoms had a cumulative debt of Rs 530 billion, which was primarily borrowed to cover the funding losses. Of this, nearly Rs 400 billion has been taken over by the state government under UDAY while the remaining has been rescheduled. As a result, the liability has reduced considerably and the monthly interest cost has declined from Rs 10 billion to Rs 3 billion. However, the discoms’ operational progress under UDAY has not been satisfactory. The ACS-ARR gap of the state utilities has increased from Re 0.66 per unit in 2016-17 to Rs 1.30 per unit in 2017-18. In terms of AT&C losses, the state has failed to meet its target of 27 per cent for 2016-17 under UDAY. The losses stood at 30.21 per cent in 2016-17 as against 31.39 per cent in 2015-16. Meanwhile, in MSEDCL, the distribution losses stood at 14.6 per cent while the AT&C losses stood at 18.47 per cent as of 2016-17. The AT&C losses vary from region to region and are in the range of 5-40 per cent, with Pune, Nagpur and Thane recording high losses. The Maharashtra Electricity Regulatory Commission (MERC) has set a target of 13.5 per cent for distribution losses. The utility is, therefore, focusing on improving its billing and collection efficiency. Meanwhile, the ACS-ARR gap stood around Re 0.15-Re 0.20 per unit in 2016-17. The ACS stood at around Rs 6.30 per unit. The discom is likely to achieve break-even in a year or two.

The private sector and joint sector utilities account for only 10 per cent of the total power distributed in the country while the state utilities are responsible for the remaining power. BRPL and BYPL are joint sector utilities that have been distributing power in Delhi since 2001-02 and have turned the distribution segment in the state over the years. Some of the key initiatives taken by the utilities include replacing electromechanical meters with electronic ones, offsetting a secure meter data management system and regular energy audits. The utilities’ ACS and ARR stand around Rs 7.60 per unit and Rs 7.70 per unit respectively.

Select discoms in the country have undertaken prepaid metering and awarded distribution franchise contracts (DFs) to reduce AT&C losses. These include discoms in Delhi. Such prepaid metering initiatives can provide an excellent metering solution in rural areas as they eliminate the need for manual meter reading. However, the meters need to be made more robust and tamper-proof. Meanwhile, Uttar Pradesh has had a good experience with the distribution franchise model as Torrent Power has completed seven years of operations as a distribution franchisee in Agra. The company has reduced its AT&C losses from 65 per cent to 25 per cent during this period as well as recovered the cost of service from consumers while earning some profits.

The state electricity regulatory commissions have also proactively taken steps to deal with the issue of regulatory assets. For instance, MERC has devised an amortisation plan for regulatory assets under which the latter will have to be recovered within a stipulated period of time. In West Bengal too, the distribution utility gets support from the state government to reduce the regulatory assets, which currently stand at about Rs 120 billion. In Delhi, however, the accumulation of regulatory assets is a key concern for BRPL and BYPL.

Going forward, the announcement of the Sahaj Bijli Har Ghar Yojana or Saubhagya and greater renewable energy procurement are expected to further increase the burden on discoms in terms of higher power demand, release of new connections, increased metering requirements and surge in power procurement costs.

Under Saubhagya, electricity connections have to be provided to 2 million rural consumers. However, the tariff for rural and agricultural consumers is way below the cost of service. This is likely to significantly decrease the ARR of the discoms. The utilities may seek a significant increase in tariff for rural consumers but the paying capacity of rural consumers is very limited. If the tariff is increased from Rs 1.80 per unit to Rs 6.50-Rs 8 per unit, the consumers may decline to take the electricity connections, which will defeat the purpose of the scheme. The state power utilities have discussed this issue in detail with the government and deliberations are under way.

Controlling AT&C losses may also become difficult with the inclusion of a large number of agricultural consumers. It is essential to provide metered connections to all consumers including those in rural areas. If unmetered connections are provided under the Saubhagya scheme, consumers may use power indiscreetly. In addition, it is difficult to access villages due to the lack of motorable roads. Although providing a one-time electricity connection is feasible in such cases, the monthly task of meter reading, billing and collection would be tedious for the discoms and their employees. Also, in the coming years, the discoms’ cost of power procurement is expected to rise to some extent with the rise in renewable power to 15 per cent by 2020 and 20 per cent by 2022. Also, the growth of rooftop solar may cost a considerable loss of revenue to the discoms in the future.

Challenges notwithstanding, power demand is expected to go up and if tariffs are rationalised, they would positively impact the entire sector. Like other bailout schemes in the past, UDAY has also shown an improvement in a short period of time with the transfer and refinancing of debt. However, sustaining this improvement in the long run is crucial for the scheme’s success as well as for the power sector. 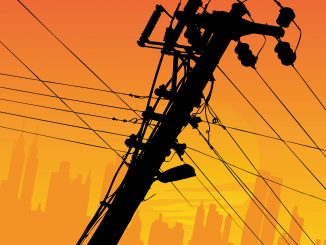 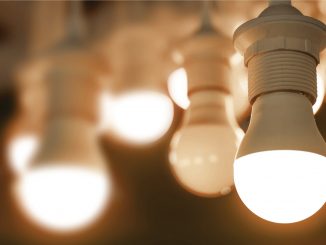 Long Way to Go
Progress under the IPDS, DDUGJY and Saubhagya

February 17, 2018
Over the past couple of years, several government schemes have been introduced in the power distribution segment [...]
More