India has committed itself to reducing its emissions intensity by 33-35 per cent by 2030 and to achieve this target, energy efficiency could potentially contribute almost 50 per cent share, according to official estimates. Given the significant policy push in this direction, the target does seem deliverable. According to the power ministry, by December 2018, India had already achieved a 20 per cent reduction in its emissions, which, it notes, was brought about through energy efficiency programmes such as Star Labelling, LED distribution, efficient building codes.

The report identifies where the energy efficiency opportunities exist and sets out the policies and strategies needed to capture them. It offers a blueprint across sectors to improve their efficiencies and lower their emissions. It also identifies the investment potential of the sectors and the key financing instruments that would play a bigger role in the future. The strategy document is currently open to public consultation and will be finalised after incorporating comments from stakeholders.

India currently has multiple policies and programmes for the promotion of energy efficiency in the economy. These are being implemented at the national, state and sectoral levels. The UNNATEE report takes stock of these programmes and their macro level impact. The programmes include:

PAT: Perform, Achieve and Trade (PAT) is a regulatory instrument to reduce specific energy consumption in energy intensive industries, with an associated market-based mechanism to enhance cost effectiveness through the certification of excess energy savings, which can be traded. For PAT Cycle I, the achievement for 427 designated consumers (DCs) was 8.67 million tonnes of oil equivalent (mtoe), or around 1.25 per cent of the total primary energy supply of India), which was an over achievement of around 30 per cent of the target. The energy saving also translates into a coal saving of 20 million tonnes (mt) and a CO2 emission reduction of about 31 mt (1.93 per cent of India’s total CO2 emissions). PAT, in its second cycle, seeks to achieve an overall energy consumption reduction of 8.869 mtoe, for which energy reduction targets have been assigned and notified to DCs in 11 sectors (eight existing sectors and three new sectors). This energy saving will lead to avoiding another 30 mt of CO2.

AgDSM and MuDSM: The objective of the Agricultural Demand Side Management (AgDSM) and Municipal Demand Side Management (MuDSM) programmes is to reduce the energy intensity of the agriculture pumping sector and the municipal pumping sector respectively, by carrying out efficiency upgradation of pump sets. The implementation of pilot projects in Andhra Pradesh and Karnataka resulted in energy savings of over 5.6 MUs and 21.3 MUs respectively under the AgDSM scheme till 2016-17. Further, countrywide, more than 1.5 million LED street lights have been deployed, which has helped realise 51.47 MW of avoided power capacity under the MuDSM programme till 2016-17.

Capacity Building of Discoms: The objective of this programme is capacity building of discoms for carrying out load management, development of DSM action plans and implementation of DSM activities in the discoms’ respective areas. So far, DSM cells have been established in all the 34 discoms.

Standards and Labelling: A key objective of this scheme is to give consumers an informed choice about the energy saving and thereby, the cost saving potential of a marketed product. Over the past five years, the programme has led to an avoided generation capacity addition of almost 22,990 MW.

Street Lighting National Programme: Under this scheme, launched in January 2015, EESL plans to replace 13.4 million LED lights. The scheme provides a sustainable service model that obviates the need for upfront capital investment as well as additional revenue expenditure to pay for the procurement of LED lights. So far, 8.9 million street lights have been replaced, resulting in a reduction of 4.13 mt of CO2.

NEMMP: The National Electric Mobility Mission Plan 2020 (NEMMP) offers demand-side incentives to facilitate the acquisition of hybrid/electric vehicles, besides promoting research and development in technology, ensuring industry participation, and promoting charging infrastructure. As of 2018, 0.22 million electric vehicles have been sold.

The country’s total energy saving potential target is estimated to be 86.9 mtoe by 2031, with the highest saving potential in the industrial sector. This is assumed to be achieved in a moderate scenario, with the implementation of current policies and programmes and the current technological penetration assumed till 2031. In an ambitious saving scenario, which assumes that technology upgradation takes place at a faster rate and policies and programmes are overachieved, the savings would be 129 mtoe.

Various energy efficiency financing instruments that are either at the conceptualisation stage or are operational in different parts of the world were analysed for the study. Five instruments have been considered to be the most suitable for India. These instruments include:

On-bill financing: A financial instrument that is serviced by or in partnership with a utility company for energy efficiency improvements and repaid by the customer in its monthly utility bill.

Cross-border Technology Transfer and Energy Efficiency Financing Facility: This is a growth equity fund, which would invest in 10-20 companies, in both developed and developing countries that have proven technological solutions for climate resilience.

Energy conservation bonds: Debt instruments issued by a state or local government, which can be sold in the market, placed with investors by an investment banking firm, or purchased directly by a bank.

India’s Nationally Determined Contribution (NDC) commitment of a 33-35 per cent reduction in emission intensity by 2030 translates into 6,807 mt CO2 in absolute terms. The achievement in emission intensity (energy and non-energy) reduction by 2030 is estimated to be 36 per cent, under the moderate savings scenario, of which the contribution of energy efficiency is 50 per cent. Thus, it is deduced that India’s NDC commitments would be met under the moderate scenario, which includes ongoing and future activities in energy efficiency. 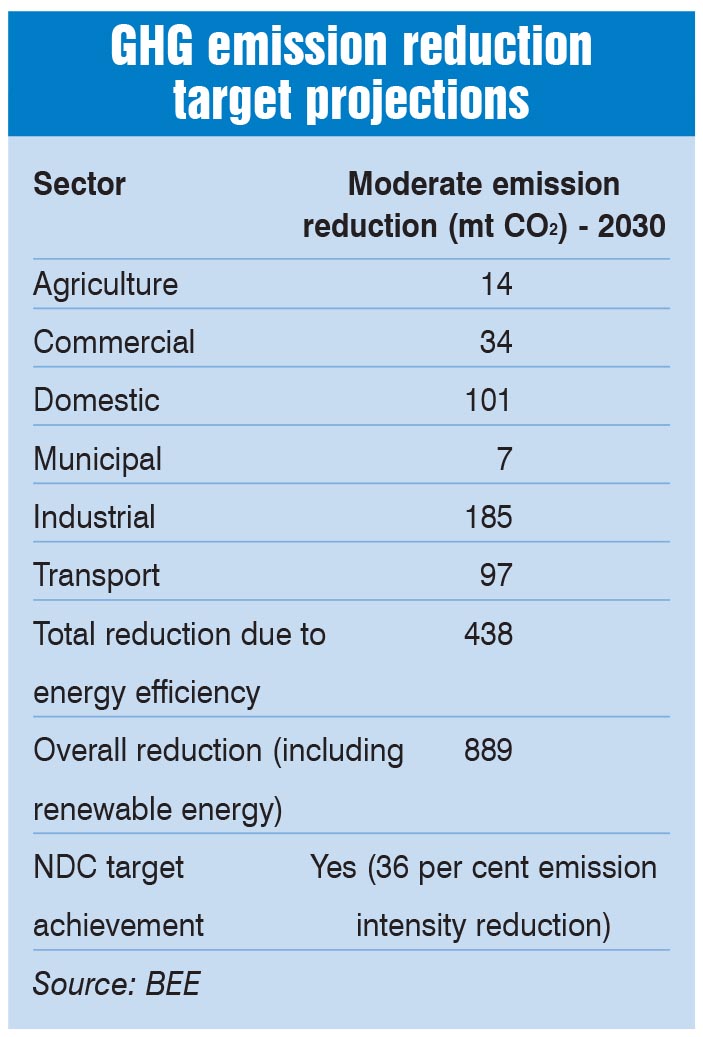 To achieve the energy efficiency potential and the country’s NDC targets, the BEE has identified several strategies. At the institutional level, the BEE points out that there is a need for a strong enforcement mechanism in the states. Another strategy should be to remove duplicity of bureaucracy. For example, currently, OEMs need to first certify that their products meet BIS standards and then apply to the BEE under the Standards and Labelling programme.

On the financing front, to promote energy efficiency solutions, it is important that project proponents and service providers have access to finance at cheaper rates, the BEE notes. These financial solutions could take the form of a revolving fund, risk guarantees, insurance facilities or a corpus for project implementation (similar to a DSM fund within distribution utilities). Either the National Clean Environment Fund or a special cess could be utilised for seeding these mechanisms.

A number of sector-specific strategies have also been identified; for instance, for the agriculture sector, which, even though it has significant energy consumption, is not incentivised to optimise its energy usage owing to the low cost of energy. Further, there are many schemes being implemented simultaneously in the agriculture sector, such as the Pradhan Mantri Krishi Sanchayee Yojana, the Kisan Urja Suraksha Evam Utthaan Mahaabhiyan for solar pumps, and the AgDSM. The study states that the programmes and the organisations implementing them work in silos; there is little coordination among them, leading to confusion among the end-consumers. In the buildings segment, while ECBC guidelines exist for commercial buildings like malls, institutions and office complexes, guidelines are yet to be released for residential buildings. Further, even though the ECBC was launched in 2007, less than half the states have till date notified the ECBC and incorporated it in their municipal building bye-laws. The ECBC needs to be mandatory in each state and the enforcement of rules made stricter.

In the industrial segment, which is among the largest energy consuming segments in the country, there is currently no central database with information related to energy use by different industries. Data needs to be collected from the discoms or the industry itself on a regular basis. Further, the baseline energy consumption of 621 DCs in PAT Cycle II covers around 52.7 per cent of the total industrial energy consumption (including the newly added sectors). Thus, there is scope to further increase the reach of the programme. It is proposed to cover at least 80 per cent of the total industrial energy consumption, including targeting not only the large consumers but also smaller consumers of energy. Apart from widening the scope of the PAT programme, a voluntary PAT programme can be initiated for consumers not identified under the programme. Non-DC participants can be allowed to access the ESCerts market. Further, the report highlights that the inclusion of industry 4.0 technologies would help achieve benefits such as cost reduction, higher efficiency and energy savings in critical manufacturing processes. These technologies include IoT, cloud computing, big data analytics, 3D printing, AR, robotics, cybersecurity and machine to machine.

The cross-sectoral strategies outlined by the BEE include considering DSM as a resource in integrated resource planning, given that demand-side resources lack the kind of impetus needed for the promotion of renewable energy sources in the current legal and policy framework. Further, discoms currently relate to energy efficiency programmes as revenue loss-making programmes. Capacity building is thus a very important activity for implementing DSM programmes. Mandatory use of smart meters, increased customer engagement and a framework to introduce time-of-day tariffs would also be needed. Increasing the reach of successful programmes such as PAT, street lighting, AgDSM and UJALA, stricter enforcement guidelines, quarterly follow-ups and reporting of programmes, and penalties on implementing partners for delays in implementation are other strategies needed to achieve the energy efficiency potential.

In conclusion, the 2030 emission reduction goal could be within reach through comprehensive and effective implementation of the key policies and actions identified by the BEE.

The cement industry in India has been going through a period of overcapacity. As per recent estimates, the industry’s average capacity utilisation during 2016 was around 75 per cent. Against an available capacity of more […]