The Indian cement industry is the second largest in the world with an installed capacity of 509 million tonnes (mt) per annum in 2018. Cement production stood at 298 mt in 2018, as compared to 217 mt in 2010, with 143 integrated cement plants, 102 grinding units, five clinkerisation units and 62 mini plants across the country. The cement industry in India is also considered one of the most energy efficient in the world, using low carbon, cost-effective technologies. Almost 99 per cent of the installed capacity in India is based on dry process manufacturing, of which 50 per cent has been built over the past 10 years.

The sector witnessed a 6.8 per cent reduction (over the baseline year, 2010) in carbon dioxide emissions intensity, from onsite/captive power plants (CPPs), to reach 670 kg CO2 per tonne of cement in 2017. It has achieved the 2020 emissions intensity reduction target three years ahead of schedule. This is mainly due to the increase in alternative fuel use, reduction in the clinker factor and rise in blended cement production. That said, significant efforts are needed to achieve 40 per cent reduction in order to meet the 2050 target.

The deployment of waste heat recovery (WHR) systems at cement plants has provided many benefits. These systems have helped mitigate greenhouse gas (GHG) emissions and achieve the Perform, Achieve, Trade (PAT) cycle targets. Further, alternative fuel use, or the thermal substitution rate (TSR), increased from 0.6 per cent in 2010 to 3 per cent in 2017. More than 60 cement plants in India have reported a continual use of alternative fuels, of which 24 per cent used biomass. Meanwhile, the share of blended cement in the total quantity of cement manufactured in India increased from 68 per cent in 2010 to 73 per cent in 2017. This was largely due to the market’s growing acceptance of blended cement, increasing awareness of sustainability concepts, the availability of fly ash from thermal power plants, and the use of advanced technology. The clinker factor also improved from 0.74 in 2010 to 0.71 in 2017.

During the past decade, the following improvements were made to ensure electrical and thermal energy efficiency:

Preheater and kilns: A number of improvements have been made in preheaters and kilns. These include the installation of platforms and alternative fuel feeding systems, nitrogen oxide (NOx) control systems, WHR systems for kiln shell radiation, energy efficient blowers for kilns, and calciner coal feeding systems. This also involved the optimisation of phase density, premixing of fuel and raw meal to improve heat transfer and reduce NOx, and modifications in cyclone dimensions using the computational fluid dynamics (CFD) model. The installation of alternative fuel feeding systems and NOx control systems increases the specific energy consumption (SEC), which is a key energy performance indicator used to set energy efficiency targets in any industry.

Grinding systems: Improvements include the use of secondary classification in the grid cone, CFDs to improve classification efficiency, multi-drive systems and vibration-based sensors for filling control; adoption of high pressure grinding rollers (HPGRs) instead of vertical roller mills (VRMs) for slag and cement grinding; optimisation of air flow by providing angular flow channels below rollers; and installation of the latest-generation classifiers.

Process fans: The key improvements in process fans included the installation of high efficiency fans and preheater systems with the fan SEC as low as 4 kWh per tonne of clinker, and the use of slide gates instead of dampers for major fans with variable frequency drives (VFDs).

Auxiliary equipment: Vertical conveyors, tri-lobe blowers and three-phase transformers were installed for increased collection efficiency in electrostatic precipitators. Other modifications included lower head pumps to cool water circuits with booster pumps for specific applications, aluminium piping to reduce the pressure drop, the use of water-cooled condenser coils for packaged air conditioning, and the installation of screw chillers instead of compression chillers.

The Jaypee Group upgraded the conventional clinker coolers with the new generation of energy efficient clinker coolers at its cement plant in Rewa, Madhya Pradesh. This reduced SEC by 15-20 kCal per kg of clinker and the power consumption of the cooler section by 0.59 kWh per tonne of clinker.

The UltraTech Cement-owned Rawan cement plant in Chhattisgarh commissioned a new clinkerisation line of 10,000 tonnes per day (tpd) with a six-stage preheater. The new clinkerisation unit is a state-of-the-Art plant, which is highly automated and has the latest generation energy efficient clinker cooler. The specific heat consumption of the kiln is 697 kCal per kg clinker and the SEC of the kiln section is 13.0 kWh per tonne of clinker.

Mangalam Cement in Rajasthan installed a medium voltage VFD instead of grid rotor resistance (GRR) for a kiln hybrid baghouse fan, resulting in savings of around 160 kW. This entailed an investment of Rs 6 million, with a simple payback period of 10 months.

During 2010-17, Indian cement companies reported several technical, financial and regulatory barriers to the adoption of advanced technologies to improve electrical and thermal energy efficiency. Layout constraints, high moisture content in limestone and the burnability index of raw mix are all technical barriers for preheaters and kilns.

In terms of technology, there are still a few challenges, such as the capacity limitations of roller presses, where higher efficiencies could be achieved by using voltage regulator modules. Also, retrofitting costs to upgrade grinding technology or replace uniflow burners with advanced multi channel burners are very high and have long payback periods of 6-10 years (if only energy savings are considered). Many plants have installed the latest energy efficient burners, which have reported reductions in NOx generation and primary air consumption as low as 3.5 per cent.

In terms of energy efficiency improvements in process fans, a few technical challenges are associated with the layout of facilities where the ideal duct system cannot be accommodated. Moreover, higher investment and operating costs for the latest auxiliary equipment could be a deterrent.

Indian cement plants have used different types of waste as alternative fuels. Solid waste accounts for 73 per cent of the total alternative fuel used. The types of solid waste used are carbon black, tire chips, refuse-derived fuel (RDF), CPP bed ash and dolochar (unburnt coal). There is significant potential for the use of RDF, which is generated from municipal solid waste (MSW). About 80 per cent of the estimated 62 mt of MSW generated in India is indiscriminately disposed of at landfill sites. In a business-as-usual scenario, India will require a landfill area of 8,800 hectares by 2050. This is equivalent to the size of the city of New Delhi. By using 25 per cent AFR by 2050, the cement industry can contribute to a 26 per cent reduction in the space required for landfilling.

Although cement kilns could completely replace conventional fuels with alternative fuels, there are some practical limitations. The physical and chemical properties of most alternative fuels differ significantly from those of conventional fuels. These fuels may not be directly used because of low calorific value, high moisture content and high concentrations of chlorine or other trace substances. Pretreatment is often needed to ensure a more uniform composition and optimum combustion. To increase TSR in Indian cement plants by 25 per cent by 2050, a major barrier is the cost of material sourcing and acquisition. In this case, the main technical barrier is the adverse impact on kiln production and SEC, as their combustion properties can lead to reduced burning conditions in the clinker bed, resulting in the decomposition of alite to belite and free lime. Cement companies are developing a complete understanding of the effects of minor constituents on long-term performance.

The government must provide incentives to promote the use of RDF from MSW and biomass. Other major policy barriers to the increased use of these fuels include the non-existence of structured industrial ecosystems for waste co-processing, and inconsistent legislative requirements for cement kilns and their dedicated waste processing facilities.

The industry requires a future-forward approach to promote waste co-processing. Some of the desired interventions are: 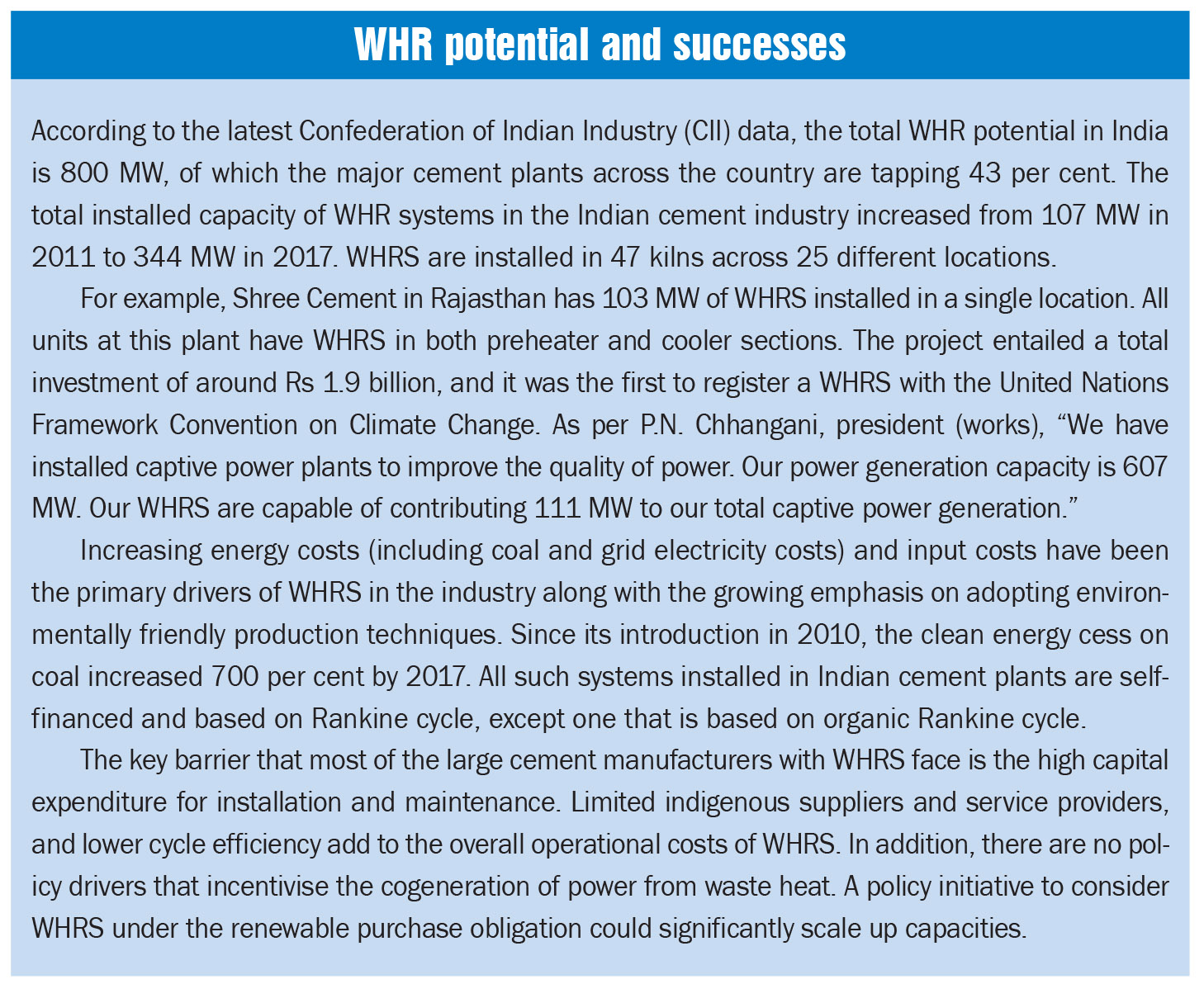 Rapid urbanisation and industrialisation are fuelling market demand for cement globally. It is expected to reach over $725 billion by 2025, at a compound annual growth rate of 7.3 per cent from 2017 to 2025. The cement industry is the world’s second largest industrial emitter of CO2, accounting for 5-7 per cent of the total CO2 emissions from human sources. The global cement industry is thus under attack due to its impact on the environment.

Global cement production is projected to rise to over 5 billion tonnes by 2050, driven by population growth, rapid urbanisation and new infrastructure in developing regions such as Southeast Asia and Sub-Saharan Africa. To reduce its carbon footprint, the cement industry has introduced a range of action plans, including the Cement Sustainability Initiative’s (CSI) first technology roadmap in 2009, which was updated in 2018. The report puts forth the technologies and solutions needed to reduce CO2 emissions from the cement industry by 24 per cent from the current levels by 2050.

The recommendations focus on areas including energy efficiency, fuel switching, clinker substitution and innovative technologies such as carbon capture and storage (CCS). These steps, with the exception of CCS, have already delivered an 18 per cent reduction in the global average CO2 intensity of the cement industry during 1990-2014, according to a report by the World Business Council for Sustainable Development.

Going forward, leading cement producers are taking a wide range of initiatives, including the adoption of breakthrough technologies, to achieve the 2050 target. HeidelbergCement, in particular, has committed to producing cement with net-zero emissions by 2030 in its northern European factories. Cementa and Vattenfall are setting up a pilot plant in Sweden to achieve zero CO2 emissions by 2030. Dalmia Cement in India has committed to the production of carbon-negative cement by 2040, supported by extensive investment in renewable energy sources. Net, net, the industry seems to be on the right path to achieve its energy efficiency targets.