Engineering major Kalpataru Power Transmission Limited (KPTL), set up in 1981, has been one of the long-standing engineering, procurement and construction (EPC) players in the power and infrastructure industry. The company has, of late, also been strengthening its presence in overseas markets.

It made a huge foray into Nordic markets with the acquisition of an 85 per cent stake in the Swedish firm LinjemontageiGrastorp AB (LG) for an enterprise value of $24 million. KPTL is already a major exporter to several countries and receives a sizeable chunk of orders from overseas markets.

“This acquisition will enhance KPTL’s position in the global transmission and distribution (T&D) market while underscoring our vision of being a local player in the global environment. It also provides a compelling value proposition and brings together two winning teams with strong values and successful track records. The acquisition provides us with an opportunity to capture the local Swedish and Norwegian markets, and  expand our presence in Nordic countries and the rest of Europe,” said Manish Mohnot, managing director and  chief executive officer, KPTL, in a recent conference call.

KPTL has a presence in over 50 countries. The company is in the business of offering turnkey solutions for extra high voltage (EHV) transmission lines up to 800 kV. This involves the designing, fabrication, erection and construction of EHV transmission lines. T&D is a major business vertical for the company and contributes 80 per cent to the total revenue. It also has one of the largest tower manufacturing plants in India with an annual production capacity of 180,000 metric tonnes.

The agreement to acquire an 85 per cent equity stake in LG was signed in March 2019. LG is an EPC company specialising in power supply solutions and services for electricity networks within the voltage range of 0.4 kV-400 kV. It has three business verticals – EPC for substations, T&D network services, and O&M services for electricity networks. The company’s average return on capital has been over 25 per cent for the past two years.

In addition, KPTL has set up two biomass plants in Rajasthan –  a 7.8 MW plant at Padampur and an 8 MW plant at Uniara. Both the plants consume agricultural waste and crop residue as inputs.

The company’s T&D  business (including overseas and domestic) has a major share (56 per cent) in the total order book. This is followed by the railways (27 per cent) and the pipeline industry. 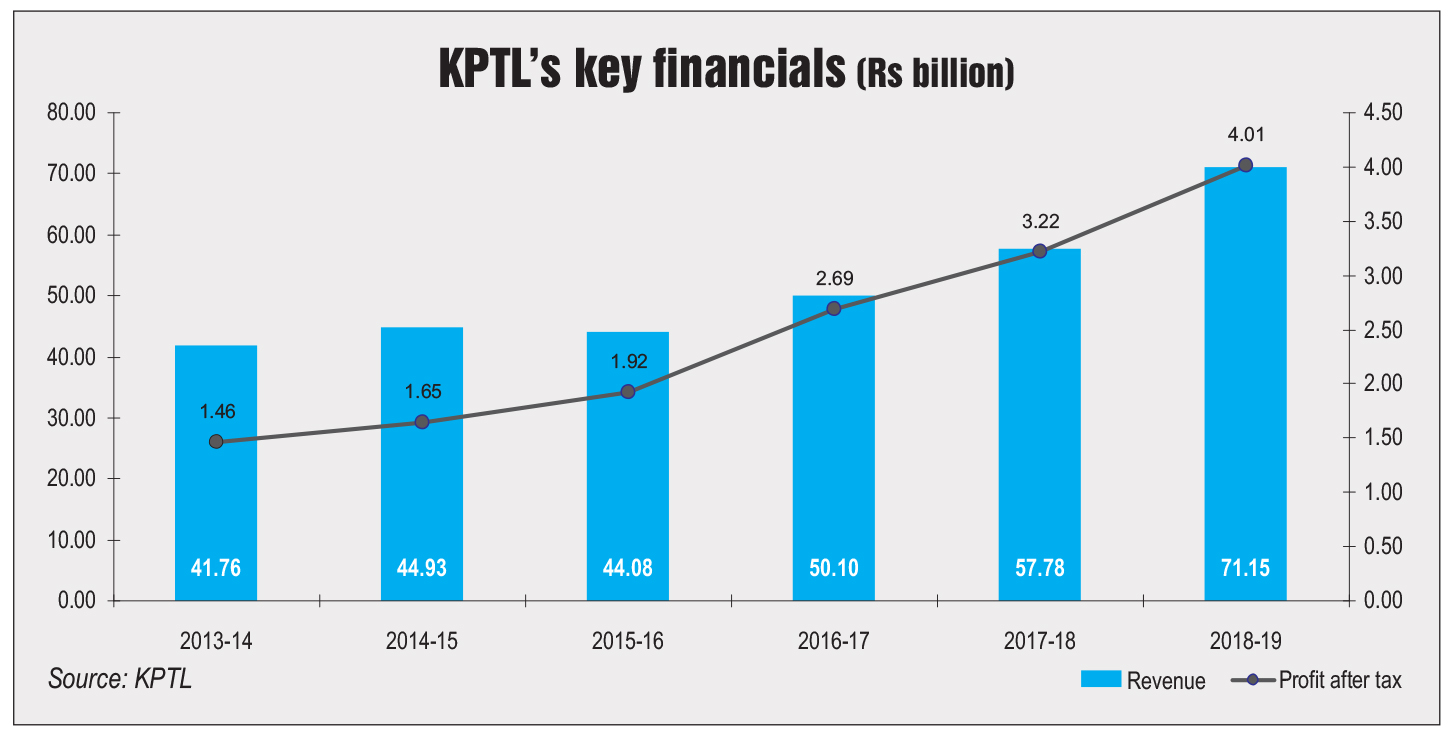 The company has a portfolio of four power transmission line projects on a build-own-operate-transfer (BOOT) basis. The total equity investment by KPTL in these projects is Rs 3,670 million and their cumulative project cost is Rs 32 billion.

Two of the projects are operational – the 100 km Jhajjar line (Haryana) commissioned in 2012, in which KPTL has a 51 per cent stake (the remaining share is owned by Techno Electric), and the fully owned 240 km Satpura line, commissioned in 2015.  The system availability of the Jhajjar and Satpura transmission lines was 98.17 per cent and 99.99 per cent, respectively, during 2018-19.

The other two under-construction lines are – the Alipurduar line in West Bengal and Bihar, (which is being built to transfer power to Bhutan and is expected to commence operations in 2019-20), and the Kohima-Mariani line, which is being built for the north-eastern grid (in which Techno Electric owns a 26 per cent stake). The Kohima-Mariani line is expected to be commissioned in 2020-21.

According to news reports, KPTL is likely to sell these transmission assets to Adani Transmission Limited. The deal, which is currently under discussion, is expected to be valued between Rs 14 billion and Rs 15 billion. 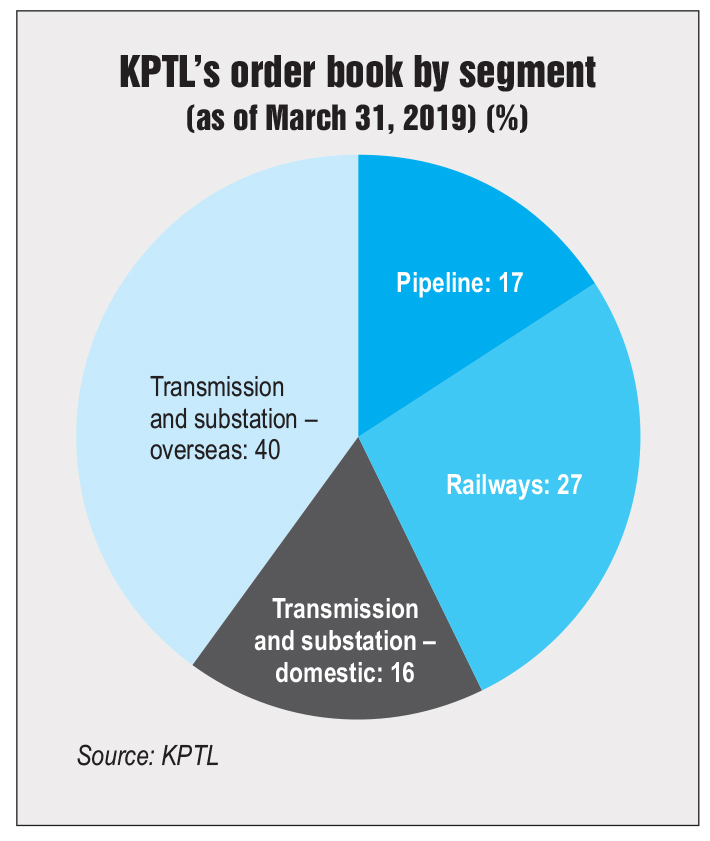 According to brokerage reports, KPTL’s order book provides strong revenue visibility. Moreover, new orders entering the execution stage are expected to help KPTL report a high double-digit revenue growth during 2019-20. According to the company’s management, 40 per cent of its Rs 100 billion order inflow guidance during 2019-20 will be from the railways and the pipeline segment, and  T&D will account for the rest. Moreover, KPTL has L1 position for orders of over Rs 15 billion, providing further order inflow visibility.

KPTL aims to scale up its business through LG’s EPC and technology expertise in the 400 kV Swedish market, which has an opportunity size of $800 million-$900 million. This will lead to improvement in margins through synergies created by low-cost Indian manufacturing base and large T&D project capabilities of KPTL. Meanwhile, proceeds from the monetisation of its transmission line assets are expected to reduce the company’s debt as well as enable it to undertake acquisitions in smaller markets.

Overall, considering the government’s focus on renewables, last-mile connectivity through schemes such as 24×7 Power for All and Saubhagya, green energy corridors and system strengthening, KPTL can expect a whole new set of opportunities to open up.