With over 150 GW of coal-fired power plants operating on subcritical technology, India ranks second among the world’s largest nitrogen oxide (NOx) emitting countries. Coal-based power plants in the country have long remained exempt from NOx emission norms. NOx has been a major air pollutant for decades. It was only in December 2015 that the Ministry of Environment, Forest and Climate Change imposed NOx control standards on power plants, irrespective of their capacity. As per the standards, thermal power plants (TPPs) installed before December 31, 2003 need to limit their NOx emissions to600 mg per cubic metre (mg per Nm3). For plants installed between December 31, 2003 and December 31, 2016, the limit is fixed at 300 mg per Nm3 and for those installed after December 31, 2016, it is fixed at 100 mg per Nm3. According to the Centre for Science and Environment (CSE), it is estimated that the new norms can help reduce NOx emissions by almost 70 per cent by 2026-27 compared to the business scenario where no pollution control technologies are used.

The NOx control measures can be broadly categorised into primary and secondary technologies. While the primary methods prevent the formation of NOx in the first place, the secondary methods are used to eliminate NOx generated from TPPs. Some of the primary measures for NOx control from coal-fired power plants are the use of low NOx burners (LNBs) and overfire air (OFAs) systems, and combustion optimisation. Secondary NOx control systems include selective catalytic reduction (SCR), selective non-catalytic reductioNOxn (SNCR) and multi-pollutant control systems. Power Line presents an overview of key NOx control technologies…

LNBs have been in operation in several countries for over three decades as a well-proven NOx emission reduction technology. It reduces the formation of NOx by altering the air-fuel mix. In such burners, the initial fuel combustion occurs in a zone with more fuel and less oxygen to minimise NOx formation. This is the most basic and cost-effective mechanism and can help achieve 30-50 per cent NOx reduction. As per the CSE, many new boilers in India are also equipped with LNBs. A key issue with LNBs is their potential to reduce combustion efficiency, which leads to an increase in carbon monoxide emissions but this can be dealt with by design modification.

OFA systems primarily control the availability of oxygen (which is required for combustion) near the burner area to minimise the formation of NOx. Initially, 70-80 per cent of the oxygen is provided near the burners leading to partial combustion of the fuel. The remaining oxygen is injected through OFA nozzles above the burner where combustion is completed. The relatively low temperature of the secondary stage limits the production of NOx. Although the majority of the existing boilers in the country have stand-alone OFA systems, they are not operated properly. OFA technology can reduce NOx formation by 20-45 per cent. In order to achieve an optimum reduction of NOx, both LNB and OFA systems should be used in conjunction. Another primary NOx control method is combustion optimisation using tangentially fired boilers. The tilting of burners can be used to control the steam temperature inside boilers. By optimising the burner tilt angle, NOx emissions can be curtailed to quite an extent.

SCR and SNCR are the two main secondary methods for NOx control. SCR systems have been commercially deployed in power plants across the globe since the 1980s. These systems are capable of reducing NOx emissions by 80-90 per cent. SCR utilises ammonia vapour as the reducing agent, which is injected into the flue gas stream after passing over a catalyst. The optimum temperature for the process should be maintained between 300 °C and 400 °C. This is usually the temperature of the flue gas at the economiser outlet. In SCR, a catalyst is used to facilitate the reduction reactions of NOx with the selected reducing agent (anhydrous ammonia, aqueous ammonia solution or urea solution) to form nitrogen and water, thereby limiting side reactions. Proper care must be taken to choose a high quality reducing agent as the pollutant content or catalyst poisons must be minimised. The catalyst used in the SCR process can be based on titanium oxide, zeolite, iron oxide or activated carbon. Typically, coal-fired plants use catalysts composed of a mixture of vanadium (active catalyst) and titanium (support material). But the final catalyst composition can consist of many active metals and support materials to meet the specific needs of each SCR system.

SNCR systems have been used commercially in oil- and gas-fired power plants since the 1970s. Today, SNCR technology is widely used in cement, waste incinerators as well as biomass and conventional fuel-based boilers. SNCR can help reduce NOx emissions by 30-50 per cent, which is much less than that of SCR systems, but the former scores over the latter owing to its lower cost and installation time. SNCR systems involve the injection of a reagent (ammonia or urea) into the flue gas in the furnace within a temperature window of 900 °C to 1,100 °C (depending on the reagent and condition of operation). At an appropriate temperature, the NOx and reagent react to form nitrogen and water. The main components of an SNCR system include reagent storage, multilevel reagent injection equipment and the associated control instrumentation. Although SNCR reagent storage and handling systems are similar to those for SCR systems, the reagent requirement in the former is more. In SNCR, both ammonia and urea require three or four times as more reagent than SCR systems to achieve a similar NOx reduction because of higher stoichiometric ratios.

A potential disadvantage of the SNCR process is that it can produce nitrous oxide, which contributes to the greenhouse effect. The formation of nitrous oxide depends on the reagent used, the amount of reagent injected and the injection temperature. Also, occasionally, unreacted ammonia can react with sulphur trioxide to form ammonium bisulphate, which precipitates at air heater operating temperatures and can lead to fouling and plugging. Overall, the effectiveness of an SCNR system depends on the design and performance of injectors, optimisation and programming of the controller, the location of the injection points, the temperature window at the injection point, the choice of reagent and the possible residence time. 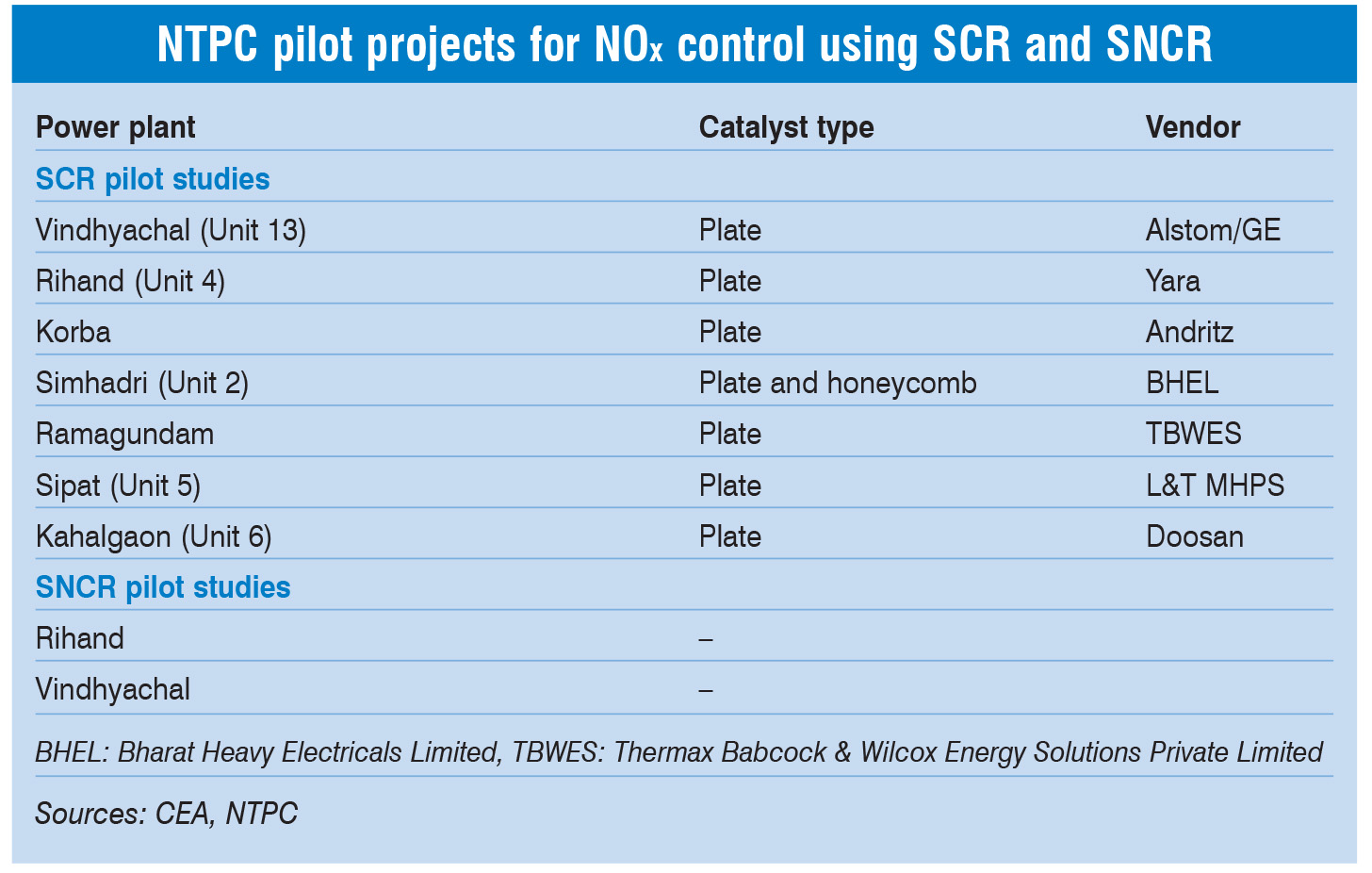 As per the CSE, of the 197 GW of installed coal capacity in the country, about 187 GW has to meet the NOx emission norms of either 600 mg per Nm3 or 300 mg per Nm3, based on the plant commissioning dates. These plants do not need to implement secondary methods for NOx emission control as compliance with the norms can be achieved through primary methods only. As per many equipment suppliers, a combination of LNB and OFA can help achieve NOx emission levels well below 300 mg per Nm3. Many TPPs have also started installing primary control systems for NOx reduction as much as 50 per cent of the power plants have reported that they already meet the relevant NOx norms (300 mg per Nm3 or 600 mg per Nm3).

Recently, in April 2019, NTPC Limited awarded a Rs 1.42 billion contract to GE for the supply and installation of low NOx combustion systems for 10 GW of TPP capacity across the country. This is the first project awarded on such a large scale by NTPC to install low NOx combustion technology at its TPP fleet. Meanwhile, about 10 GW of capacity, or 5 per cent of the total coal-based capacity, has to meet the 100 mg per Nm3 standard. These projects will need to opt for secondary methods of NOx control like SCR and SNCR. Managing and disposing of the catalyst in SCR is another issue that needs to be addressed. The industry is also divided on the efficacy of SCR for NOx control in plants based on domestic coal, which has a high ash content that can adversely affect the catalyst. On the other hand, for SNCR technology, there are limited vendors. SNCR also has other disadvantages like a limited reduction of NOx, reduction in boiler efficiency, high reagent combustion and additional carbon dioxide emissions.

That said, NTPC is playing a key role in helping the industry. To ascertain the right technology, NTPC has seven SCR and two SNCR pilot tests under execution by seven vendors (see table). It is also implementing combustion tuning in units installed before December 2003. The outcome of the NTPC studies regarding SCR and SNCR systems is expected to pave the way for the implementation of post-combustion de-NOx systems in the country.

To conclude, gencos should take firm steps to finalise their NOx control plans at the earliest and start implementation, given the harmful effects of these emissions on the environment.