India’s installed wind power capacity was around 35,626 MW as of March 2019, making it the fourth largest wind energy producer in the world. The installed wind power capacity grew at an impressive compound annual growth rate of 11 per cent between 2012-13 and 2018-19. However, during 2018-19, only about 1,480.97 MW of wind power capacity was added – the lowest in the past six years. The capacity addition is 37 per cent of the 4,000 MW target for the year and 16 per cent lower than the 1,766 MW achieved in 2017-18. In comparison, capacity addition in the earlier years was quite robust at 5,503 MW in 2016-17 and 3,333 MW in 2015-16. The slowdown in capacity addition in the past two years is mainly due to a transition from the feed-in tariff (FiT) regime to a competitive bidding regime in the wind segment. Power Line takes a look at the key trends and developments in the segment…

Competitive bidding was introduced in November 2016. Prior to this, wind power tariffs were determined by state commissions under the FiT regime wherein preferential tariffs were fixed in order to accelerate investments. The switch to competitive bidding had immediate fallouts.  The major policy shift sent shockwaves through the market, throwing off the existing business models of developers and manufacturers alike. The first round of bidding, which took place in February 2017, discovered tariffs that were much lower than the prevailing FiTs – Rs 3.46 per kWh was discovered against an FiT of about Rs 5 per kWh. As a result, the double-digit internal rate of return was reduced to sub-10 per cent levels for developers. Also, the market anticipated states to follow suit and implement competitive bidding. As a result, there was a rush to get projects approved under the then existing FiT regime to make the most of the higher tariffs while they lasted.

The removal of generation-based incentive and the reduction in the accelerated depreciation tax benefit by half made matters worse for project operators. These changes came into effect on April 1, 2017, and the preceding quarter saw developers going ahead with large capacity additions to avail of these incentives. Moreover, the decrease in capital costs was not proportional to the fall in tariffs, thereby diminishing profit margins. The threat of potential reneging of power purchase agreements (PPAs), after Andhra Pradesh and Karnataka backtracked on their signed PPAs with the discovery of Rs 3.46 per kWh of tariff in the first tranche of wind power auctions, also loomed large over the market. 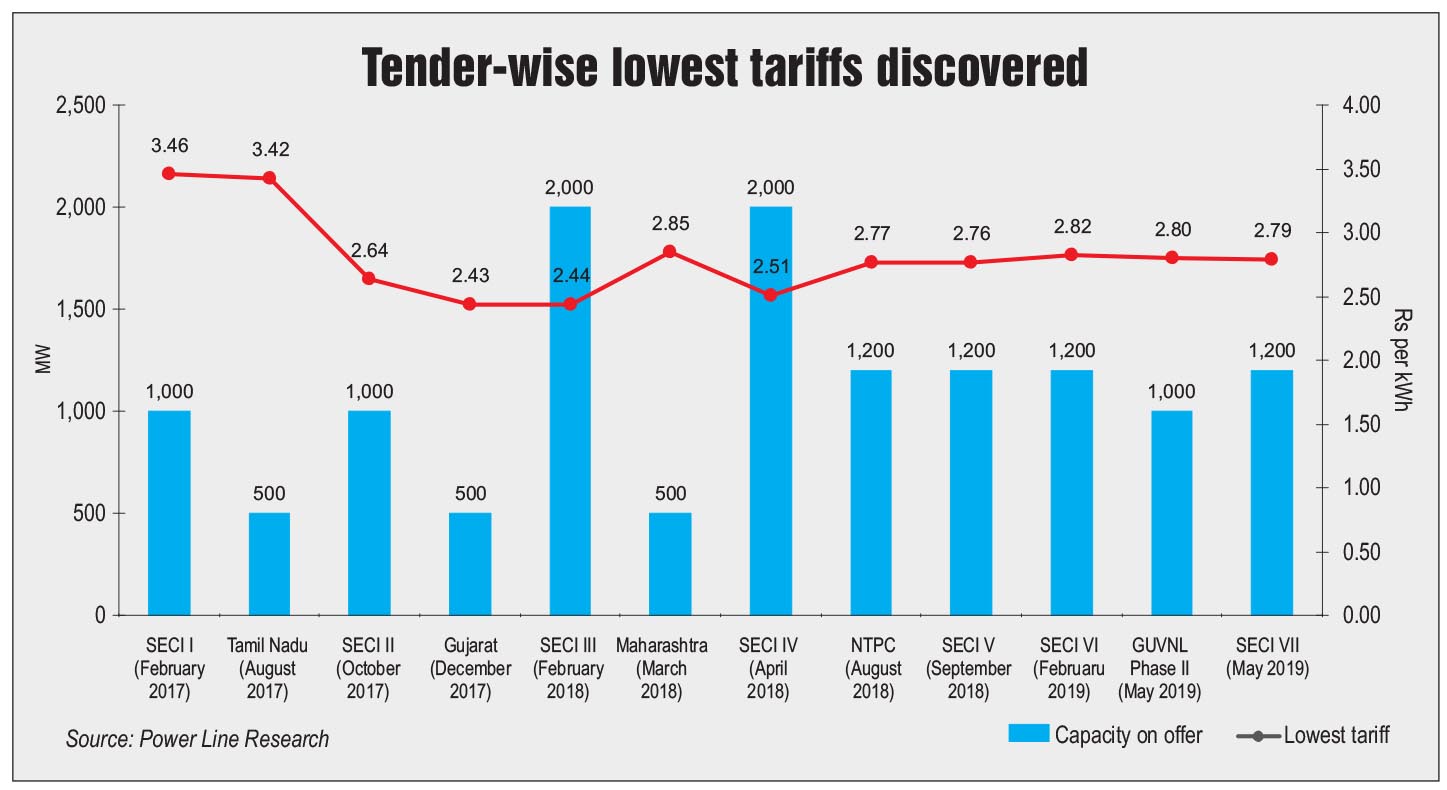 From February 2017 to May 2019, tenders for over 13 GW were released by the Solar Energy Corporation of India (SECI) in seven tranches, and by the state agencies of Maharashtra, Tamil Nadu and Gujarat. The lowest tariffs discovered in the tenders witnessed a decline initially – from Rs 3.46 per kWh (in February 2017) to Rs 2.43 per kWh (in December 2017) – before picking up  to reach the level of Rs 2.76- Rs 2.85 per kWh during the second half of 2018. In the latest auction conducted by SECI under the 1,200 MW Tranche VII interstate transmission system (ISTS)-connected wind project tender, the lowest tariff of Rs 2.79 per kWh was discovered. The tariff was quoted by Engie India, which bid for 200 MW. It has been observed that wind power tariffs have stabilised above the Rs 2.75 per kWh mark in recent tenders.

In recent times, there have been instances of under-subscription of tenders as developers avoid bidding due to low tariff caps. For instance, SECI’s Tranche VII tender, which had a tariff cap of Rs 2.83 per kWh, was undersubscribed by 600 MW. Similarly, SECI’s Tranche II tender for 1,200 MW of wind-solar hybrid projects was undersubscribed by 300 MW. It had a tariff cap of Rs 2.70 per kWh and saw bid submission from only two companies for a capacity totalling 900 MW. Adani Green Energy bid for 600 MW and ReNew Power bid for 300 MW. Another reason for the low participation by developers is the unavailability of financing, as banks are wary of lending at this level of tariffs. However, SECI’s Tranche VI tender, issued in February 2019, was an exception – bids for 2,325 MW of capacity were received against the tendered capacity of 1,200 MW. The tender was oversubscribed by an aggregate capacity of 1,125 MW.

Further, there has been a spate of tender cancellations due to major transmission constraints. As a result, the interest in tenders has been declining and tariffs have been increasing marginally. Lack of interest in tenders has led to cancellations and retendering of capacity. In July 2018, the SECI Tranche V tender with 2 GW of wind power capacity was cancelled as it failed to garner sufficient bids owing primarily to transmission issues. It was then retendered in August 2018 with a total capacity of 1,200 MW and was oversubscribed as bids totalling 2,190 MW were submitted by nine project developers.

The recent fall in wind power tariffs has tempted many states to auction wind capacity to fulfil their renewable purchase obligations (RPOs). However, inadequate transmission capacity and poor land availability in high wind areas can lead to higher tariffs or tenders being cancelled altogether. For instance, Gujarat Urja Vikas Nigam Limited (GUVNL) had annulled its 500 MW wind power tender in July 2018 for the lack of adequate transmission infrastructure. 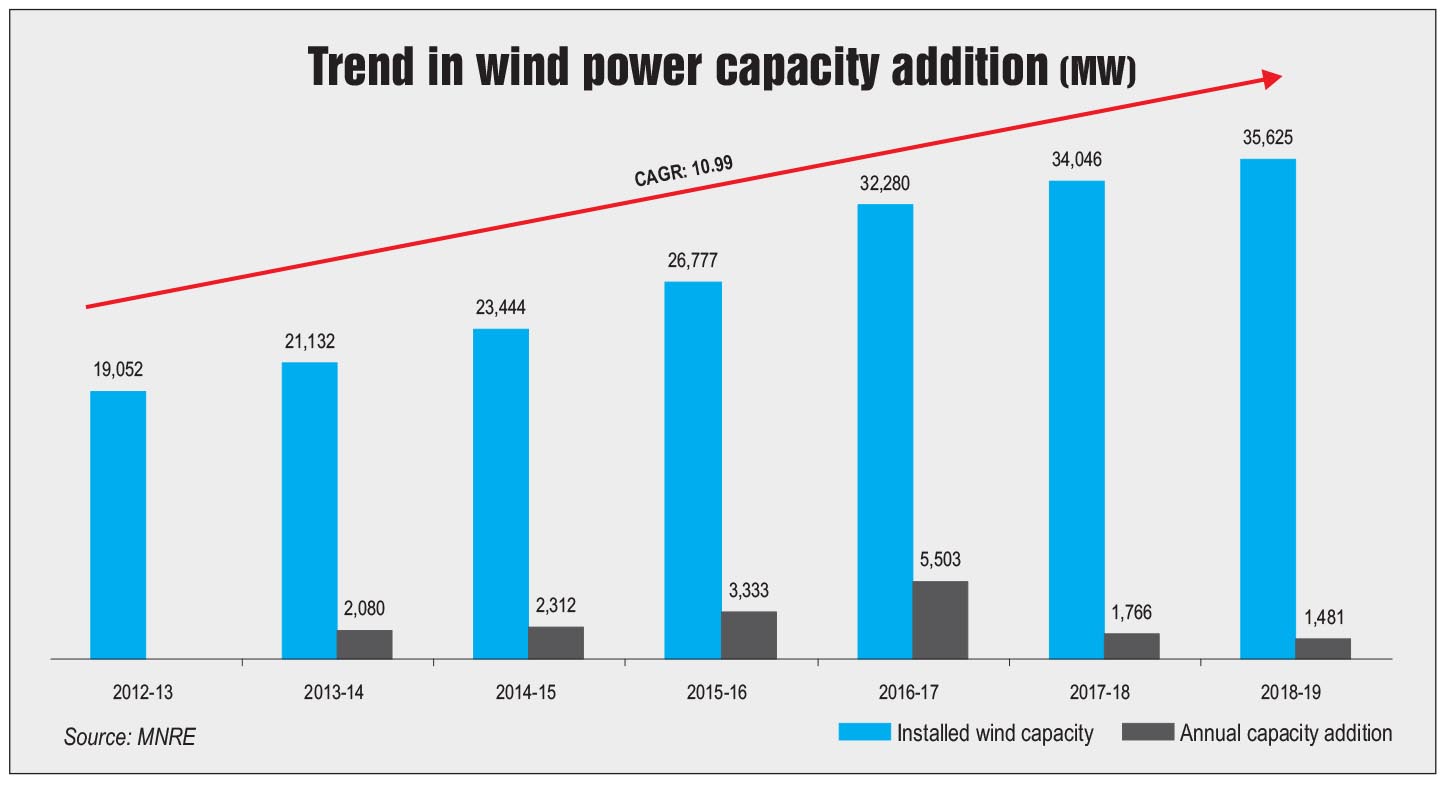 There are several challenges in the growth of the wind power market mainly resulting from the transition from FiT to competitive bidding. Besides, transmission constraints, PPA renegotiations and the high cost of capital continue to hamper the segment’s development. As per the India Wind Turbine Manufacturers Association (IWTMA), the tariff discovered in auctions is so low that it is neither bankable nor sustainable. In the past two years, as against the country’s annual installed manufacturing capacity of 10 GW, only 15 per cent capacity has been utilised. The IWTMA has called for going back to FiTs and having in place a firm policy framework for developing 50 GW of wind power capacity in the next five years. The association has recommended that tariffs for wind projects should be set by the Central Electricity Regulatory Commission with an annual reduction of Re 0.05 per kWh.

Going forward, it is unlikely that the central government will revert to the FiT regime as competitive bidding has created a decentralised and transparent tendering process that is beneficial for wind power market development in the long run. Also, lower tariffs will result in greater power procurement by discoms. However, in order to reach the target of 60 GW by 2022, a total of about 25 GW will need to be added in 2019-20, 2020-21 and 2021-22, which translates into about 8 GW of annual addition. Looking at the current pace of capacity additions, this seems like a tall order. Therefore, some policy intervention will be required if the target is to be met. Industry experts believe that tariffs should be based on wind density and associated competition, and, therefore, “tariff caps” in auctions should be removed.

In terms of emerging areas, offshore wind power has significant potential. In April 2018, the Ministry of Renewable Energy (MNRE) called for expressions of interest for 1,000 MW of wind power capacity to be developed offshore in the Gulf of Khambhat, off the coast of Gujarat, which witnessed significant participation. This was followed by the installation of LiDAR for assessing the offshore wind resource potential at the site in July 2018 by the National Institute of Wind Energy. Now, the MNRE and the Gujarat government are reportedly working on launching a 1,000 MW offshore wind tender. In January 2019, the MNRE also issued Draft Offshore Wind Energy Lease Rules, which are aimed at encouraging the development of the offshore wind segment. According to the draft lease rules, no project development activity or site survey for calculating the potential of offshore wind can be undertaken without a lease.

Net, net, the wind segment is currently dealing with policy-based transitional issues which will subside as project developers evolve their business models in line with market trends. Going forward, it is important for the wind power industry to look beyond 2022 and put in place actionable growth plans for the period upto 2030.