The Northeast’s power system remains small and largely underdeveloped. Generation capacity in the region stands at less than 5 GW, as of March 2019. Capacity additions have been modest, with the region adding just about 1,300 MW since 2015-16. Although it has a significant hydropower potential of over 58 GW, less than 7 per cent is currently operational or under development. The region’s renewable energy potential too is vastly untapped, with less than 400 MW of capacity installed so far.

A recent study by a task force comprising members of the Forum of Regulators (FoR), which assessed the power sector performance in the north-eastern states, notes that there are a number of regulatory challenges in the region as well. For instance, the gap between the average cost of supply (ACS) and the average revenue realised (ARR) is fairly high for most of these states. Further, states where the power sector is managed by government departments are lagging in timely submission of tariff petitions, impacting the timely revision of tariffs. Compliance with renewable purchase obligations (RPOs) remains weak, while deviation settlement mechanism (DSM) regulations are yet to be adopted in many states. However, among the states in the region, there are some that are better performers. In the task force study, Meghalaya achieved first grade, indicating that its power sector had performed well and required little attention. Assam and Sikkim achieved the second grade, indicating that they were average performers and needed significant attention. The remaining five states (Arunachal Pradesh, Manipur, Nagaland, Mizoram and Tripura) achieved the lowest grade, third, indicating they had performed poorly, had information availability issues and would require support till their performance improves. That said, even the states that are doing well, need to improve their performance in some critical areas. 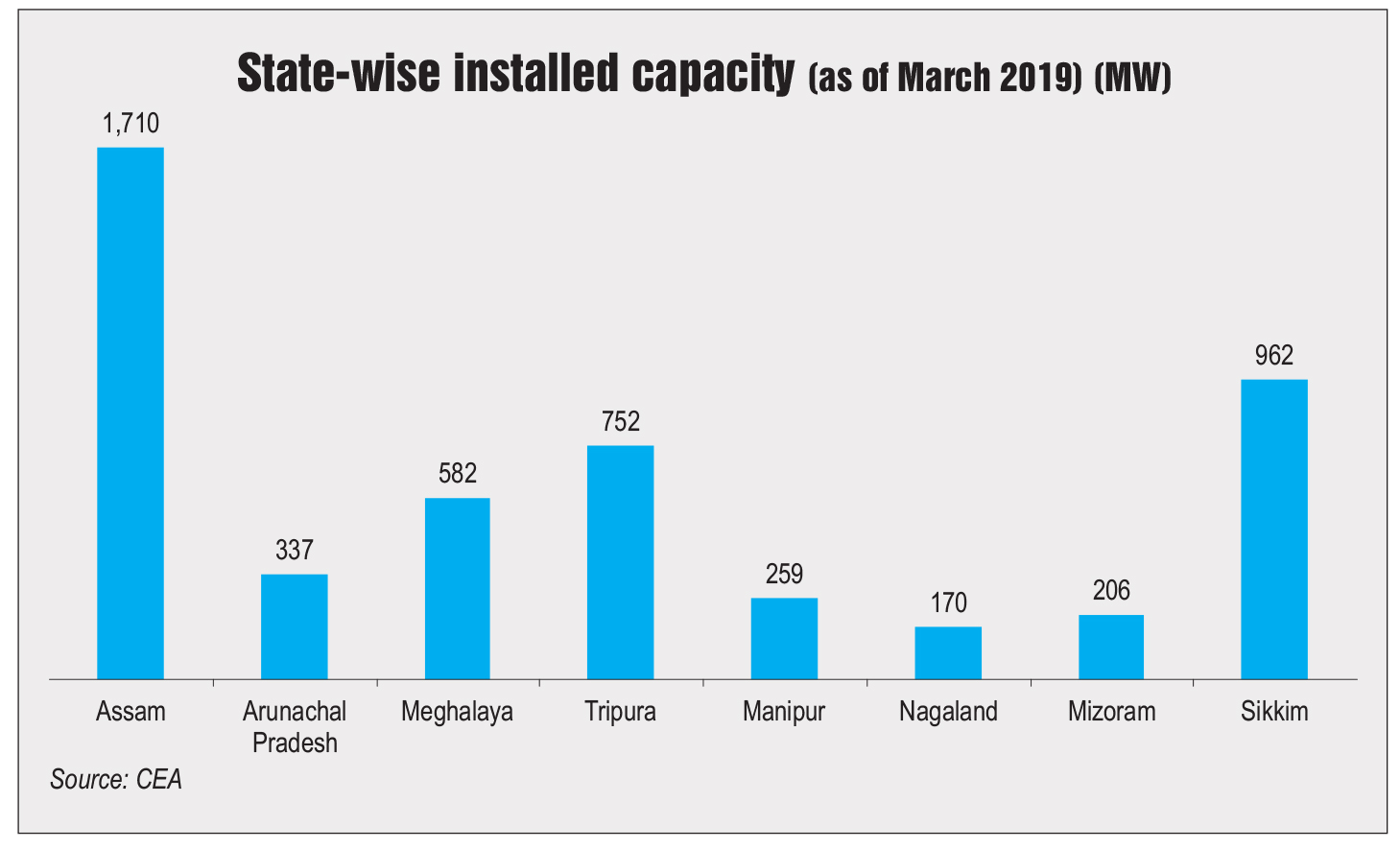 Corporatisation of the state electricity boards is yet to take place in many states in the region. In Sikkim, Nagaland, Arunachal Pradesh and Mizoram, the electricity supply business is managed by government departments. In Tripura, one company performs the functions of all the utilities. In Meghalaya and Assam, there are separate utilities for generation, transmission and distribution.

The region’s cumulative installed capacity (including renewables) stood at 4,979 MW as of March 2019, an increase of about 35 per cent since 2015-16. The region also gets about 316 MW as its share in the unallocated quota of the central sector. The region has a thermal capacity base of about 2.4 GW (of which nearly half is in Assam) and hydro capacity of 2.1 GW (40 per cent of which is in Sikkim).

All the states in the region are currently implementing the Ujwal Discom Assurance Yojana (UDAY). Household electrification has been completed in all states, as per the Saubhagya dashboard. The Integrated Power Development Scheme (IPDS) is being implemented in 163 towns across 43 circles, and funds of Rs 10.95 billion have been sanctioned. All the north-eastern states have also joined the UJALA scheme for LED distribution.

The operational performance of the discoms, however, remains weak. Against a national average of 19 per cent for UDAY in 2017-18, all the north-eastern states, except Tripura and Assam, continued to report high AT&C losses, ranging from 25 per cent (Manipur) to over 65 per cent (Arunachal Pradesh). Notably, Assam and Tripura beat their UDAY targets for 2017-18. The average billing efficiency for the region in 2017-18 was about 70 per cent, with Mizoram and Assam being better-than-average performers. Meanwhile, the average collection efficiency was around 95 per cent.  The average power purchase cost in the region is around Rs 3.09 per unit, ranging from Rs 1.60 per unit for Sikkim to Rs 4.70 per unit for Assam. The ACS-ARR gap varies from Re 0.35 per unit to Rs 7 per unit. Only Tripura is currently reporting a surplus. Transmission losses range from 3 per cent to 5 per cent for most states. 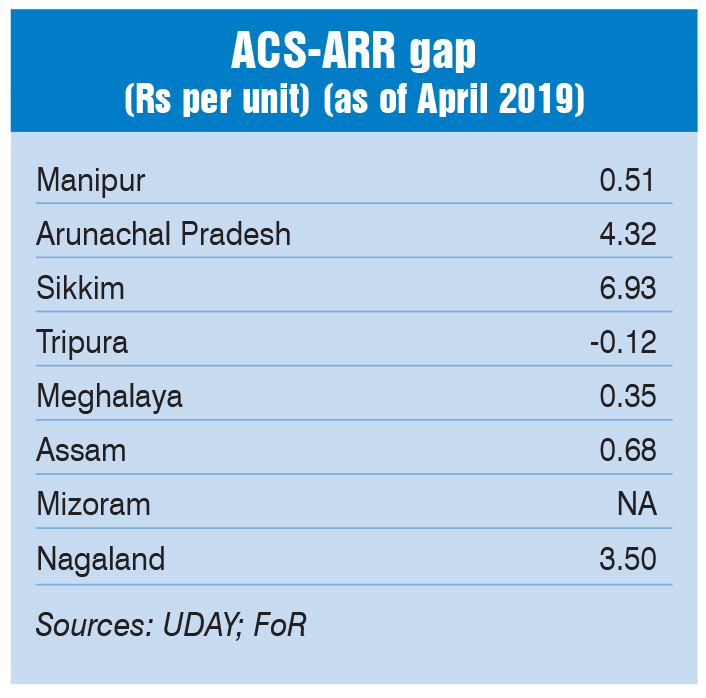 Of the region’s installed renewable capacity of 390.21 MW as of April 2019, more than 86 per cent comes from small hydro (338 MW), followed by solar power (38 MW) and bio power (14 MW). Arunachal Pradesh has the largest base of small-hydro while Assam has the highest installed solar capacity. The region’s entire biomass power capacity comes from Meghalaya. None of the states in the region, except Tripura, was able to achieve the RPO compliance target for 2017-18.

While model DSM regulations were issued by the FoR at the state level in March 2017, many states in the Northeast do not have these regulations, which is hampering the implementation of the availability-based tariff (ABT) mechanism. Assam and Meghalaya have initiated the regulatory process for the preparation of DSM regulations for their states; however, the other states are yet to come up with DSM regulations. Further, the implementation of the Scheduling, Metering, Accounting and Settlement of Transactions in Electricity (SAMAST) initiative is yet to take place in the region. 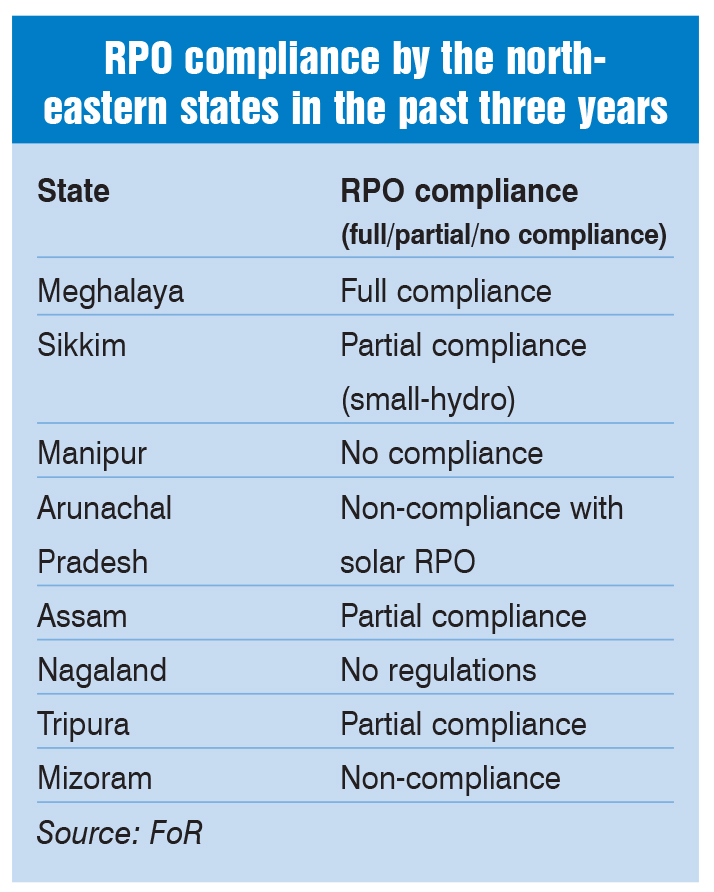 A key initiative to address the region’s problems has been the NITI Aayog’s forum for the north-eastern states, set up in February 2018. One of the issues flagged during deliberations at the forum’s first meeting was the slow progress of hydropower projects. As per data from the Central Electricity Authority (CEA), the state has around 3,307 MW of projects under construction, which have been stalled for various reasons, including the 2,000 MW Lower Subansiri project. To expedite project development, the forum has recommended that projects should be allowed to be terminated with no litigation or liabilities. This would enable PSUs to take up slow-moving hydro projects. Recently, NHPC Limited received cabinet approval to take over the Teesta VI hydro project in Sikkim after the initial bidder, Lanco, went into insolvency and faced roadblocks. Meanwhile, in December 2018, the union government decided to provide 100 per cent funding for central projects in the Northeast, a step aimed at addressing the financing concerns of projects in the region.

Renewable energy development is also picking up pace. The Solar Energy Corporation of India (SECI) is planning to issue a tender for 1,000 MW of solar photovoltaic capacity to be developed in the region and help the states meet their RPO targets. The ceiling tariff for these solar projects is likely to be set at Rs 3 per kWh. Earlier, in February 2018, SECI had issued a tender for a 70 MW solar project in Assam while Assam Power Distribution Company Limited awarded 85 MW of capacity in June 2018.

The government is also working towards addressing T&D infrastructure gaps. Projects for augmenting the T&D system have been taken up under the Comprehensive Scheme for Strengthening the Transmission and Distribution System in Arunachal Pradesh and Sikkim at an estimated cost of Rs 47.54 billion. Another key initiative is the World Bank-funded North Eastern Region Power System Improvement Project for the states of Meghalaya, Mizoram, Manipur, Nagaland, Tripura and Assam at an estimated cost of Rs 51.11 billion, which is being implemented by Power Grid Corporation of India Limited. 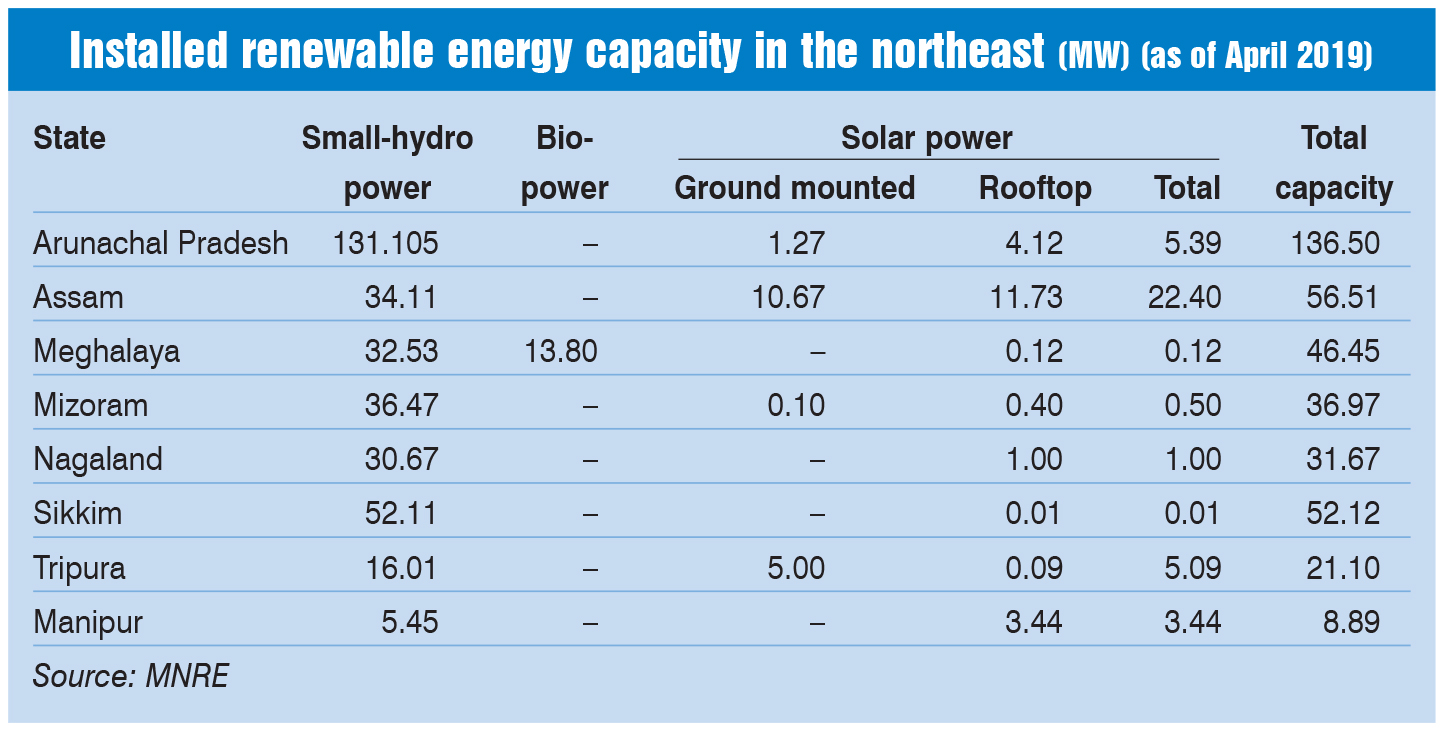 To address power sector challenges in the Northeast, several reforms need to be undertaken, the FoR suggests. The states need to initiate the process of corporatisation or functional segregation of the sector. To begin with, they may maintain separate regulatory accounts for the generation, transmission and distribution businesses. To meet future demand, it has been recommended that the regulatory commissions start multi-year tariff proceedings in which all the utilities, including the state power departments, could be asked to come up with five-year business plans, indicating demand, supply and investments to be made over the next five years. The regulatory commissions are also recommended to put in place a mechanism whereby licensees are required to provide quarterly reports. Further, collection efficiency efforts need to be supported by automated metering and billing infrastructure. The FoR, moreover, recommends that the regulatory commissions pass orders on all tariff matters regularly and come up with a reasonable mechanism for quarterly revisions in fuel and power purchase price adjustment based on state specifics. Institutional strengthening of the commissions is also needed, besides setting up of region-specific core groups for knowledge exchange and capacity building of discoms and SLDCs.

In sum, the Northeast region, with its rich resource base, has often been positioned as a key gateway for expanding international power trade with the country’s neighbours. The FoR study serves as a clarion call to all stakeholders to understand the limitations that the sector faces and work towards harnessing trade benefits.