Over the past one year or so, the solar power segment has witnessed a slowdown in its growth. Capacity addition during 2018-19 declined by around 30 per cent over the previous year, primarily due to the uncertainty around the safeguard duty on imported solar modules, the imposition of upper tariff ceiling in the tender documents and the lack of clarity on goods and services tax (GST). However, with some clarity coming in on these issues, the segment is again poised for growth. Moreover, the recently concluded bidding under solar tenders received an overwhelming response leading to significant oversubscription. Besides, the lowest tariffs discovered in the tenders were in the range of Rs 2.55-Rs 2.76 per unit. The other positives for the solar segment have been the launch of the Kisan Urja Suraksha evam Utthaan Mahabhiyan (KUSUM) for harnessing solar power in the agricultural segment, and approval for viability gap funding (VGF) of around Rs 85.8 billion for 12,000 MW of grid-connected solar photovoltaic (PV) projects.

Power Line presents a round-up of the key trends and developments in the solar segment.

During 2018-19, around 6,529 MW of solar capacity (ground mounted and rooftop) was added, a decline of 30 per cent over the previous year. Of the total capacity addition, ground-mounted solar plants accounted for nearly 5,796 MW as against a target of 10,000 MW. Meanwhile, rooftop plants accounted for 732 MW against a target of 1,000 MW. The achievement of the rooftop segment stood at 73 per cent as against the sub-50 per cent trend of the previous years.

Between April 2018 and February 2019, solar energy generation stood at about 22,540 MUs, an increase of 55 per cent over the corresponding period in 2017-18. With an increase in installed solar capacity, the generation has also increased though it still constitutes a small share in the country’s overall electricity generation (3 per cent) owing to low capacity utilisation factors of solar plants at 20-24 per cent.

Due to various uncertainties, recent tenders in the segment have received mixed results, with some tenders getting oversubscribed and several others being poorly received. Many tenders have also been delayed or cancelled due to issues such as the lack of adequate transmission infrastructure and higher-than-expected tariffs. The tender released by the Solar Energy Corporation of India for 750 MW of grid-connected capacity in Rajasthan received bids totalling 2,370 MW from 13 companies with the lowest bid of Rs 2.48 per kWh. The tender released by Gujarat Urja Vikas Nigam Limited (GUVNL) received technical bids from seven companies for an aggregate capacity of 1,045 MW, an oversubscription of 545 MW, and recorded the lowest tariff of Rs 2.55 per kWh. Meanwhile, another tender issued by GUVNL was undersubscribed by 700 MW. Maharashtra State Electricity Distribution Company Limited’s tender was oversubscribed by 900 MW, and witnessed the lowest tariff at Rs 2.74 per kWh.

Greater economies of scale, entry of global players, availability of foreign funding and decline in module prices had led to a drop in tariffs. In early 2018, however, tariffs started rising due to land and transmission constraints, and uncertainty regarding safeguard duties. On July 30, 2018, the Ministry of Finance announced the levy of a 25 per cent safeguard duty on solar cell imports from China and Malaysia for the next two years. These duties were imposed to safeguard the interests of domestic manufacturing firms, which lag behind their foreign counterparts that offer cheaper products. After the uncertainty regarding safeguard duties was resolved, following the Supreme Court’s order in September 2018, the tariffs started declining again. 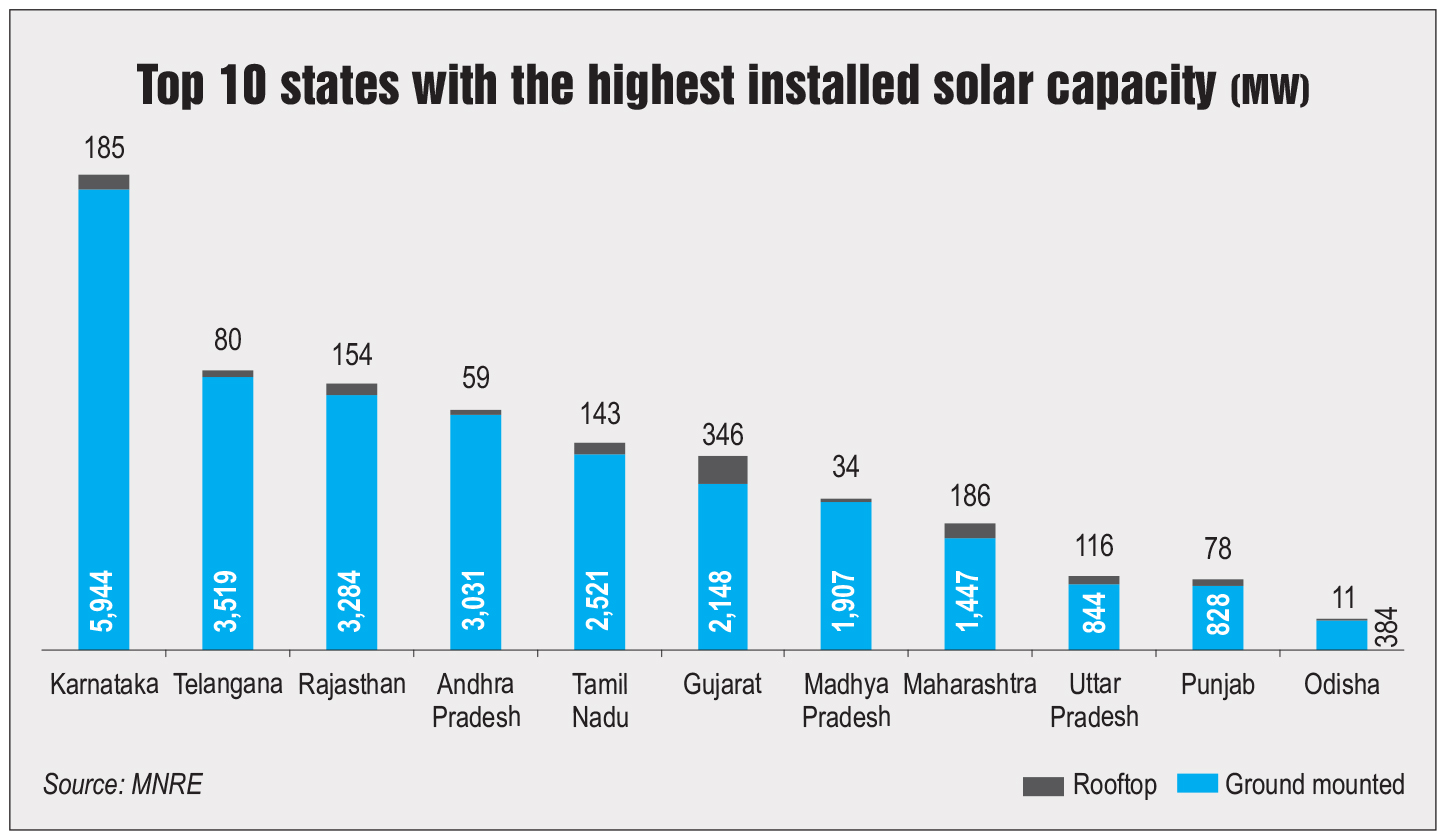 In February 2019, the Cabinet Committee on Economic Affairs (CCEA) launched KUSUM for providing financial and water security to farmers by harnessing 25.75 GW of solar energy capacity by 2022. The government has earmarked Rs 344.22 billion for the scheme. It entails the deployment of 10,000 MW of decentralised ground-mounted and grid-connected renewable power plants; installation of 1.75 million stand-alone solar-powered agricultural pumps; and solarisation of 1 million grid-connected solar-powered agricultural pumps.

In February 2019, the CCEA approved the setting up of 12,000 MW of grid-connected solar PV projects with a VGF of Rs 85.8 billion. The projects are estimated to entail a total investment of about Rs 480 billion and will be set up in four years, from 2019-20 to 2022-23. During the same month, the CCEA approved Phase II of the Grid Connected Rooftop Solar Programme for achieving a cumulative capacity of 40,000 MW by 2022. The programme will be implemented with a total central financial assistance of Rs 118.14 billion.

Another challenge facing the solar segment is the dependence of imported modules. Thus, any increase in the installation targets of China leads to an increase in module prices. Moreover, the domestic module manufacturing industry is not mature enough to cater to the increasing demand. It uses obsolete technology and imported raw material. There is limited access to cheap loans and factories are often operating below their capacity. As a result, domestic modules cost 10-20 per cent more than the imported ones from China, even after the safeguard duty is imposed.

A bone of contention in the segment pertains to the imposition of GST. On January 1, 2019, the government deemed 70 per cent of contract value as goods, taxable at 5 per cent, and the balance 30 per cent as services, taxable at 18 per cent. However, the industry was disappointed as the said ad hoc valuation did not provide a fair estimate of the actual split of goods and services at around 90:10. The Delhi High Court has directed the Goods and Services Tax Council to review the tax structure for solar power projects. The decision was in response to a writ petition filed by the Solar Power Development Association.

Apart from this, delays in the commissioning of power evacuation infrastructure associated with solar projects pose a challenge. It takes a few months to develop solar power plants from concept to commissioning while transmission networks are developed in two to three years. In addition, the inadequate implementation of net metering policies in many states is hampering the uptake of rooftop solar. 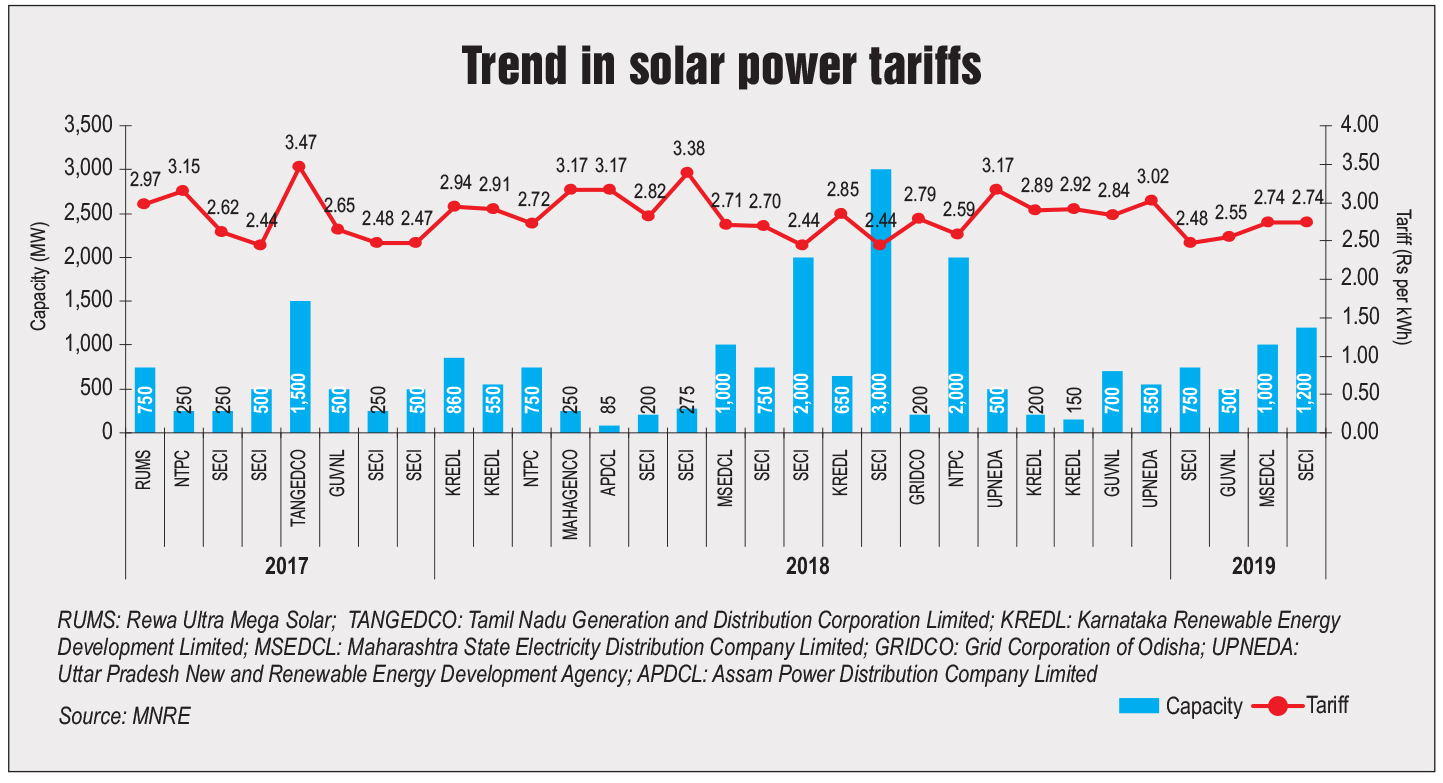 To conclude, the segment is now showing green shoots of recovery. The situation seems to be improving with several steps being taken at both the central and the state level to resolve the issues that led to muted growth. In a bid to address the land constraint issue in renewable energy development, the Gujarat government released its land policy in January 2019. The state intends to avoid scattered project development. It also aims to make evacuation feasible and convenient. According to industry experts, this could be a reason for the oversubscription of GUVNL’s 500 MW solar tender. Moreover, the finalisation of the GST rate has brought policy stability. Developers are also making efforts to expand their portfolios and improve their balance sheets.

Moreover, with the general elections now behind the country, the uncertainty regarding key solar programmes is likely to lift. The tenders and auctions that had seen a slowdown will likely revive. As such, several industry experts believe that the targets set in 2014 for 2022 are now within reach as there will be clarity among implementing agencies as well as developers and investors regarding the planned growth trajectory.