The Power System Development Fund (PSDF) was constituted in June 2010 with the notification of the Power System Development Fund Regulations by the Central Electricity Regulatory Commission (CERC). The regulations aimed to deal with the surplus regulatory funds available to the regional load despatch centres. In September 2014, the Ministry of Power (MoP) notified a scheme for the operationalisation of the PSDF. The scheme entailed the development of the necessary transmission infrastructure and improvement in grid reliability.

As of January 2019, the MoP sanctioned a grant of Rs 108.64 billion to various utilities under the PSDF. The disbursement of funds, however, has been very slow with only about Rs 18.94 disbursed till date. In order to expedite the process, the CERC proposed modifications in the PSDF Regulations on May 24, 2019. The proposed regulations are expected to simplify the approval and monitoring procedures of the fund.

As per the MoP guidelines, the PSDF could be utilised for the creation of transmission infrastructure to reduce congestion; installation of reactive energy equipment to improveme the voltage profile of the grid; installation of standard and special protection schemes, pilot and demonstrative projects to address the discrepancies identified in protection audits on a regional basis; and renovation and modernisation of transmission and distribution systems. The funds could also be used for conducting technical studies and capacity building programmes for the utility professionals. They may also be utilised by distribution utilities for projects that have a bearing on grid safety and security.

The National Load Despatch Centre (NLDC) is the nodal agency for the implementation of the PSDF scheme. A three-tier structure has been created to manage the PSDF. An appraisal committee, headed by chairperson, CEA, undertakes the techno-economic appraisal and prioritisation of the various project proposals for funding from the PSDF. The CERC gives regulatory approvals to projects and the monitoring committee, headed by the secretary, MoP, sanctions projects based on the appraisal report and regulatory approval of the CERC. In the proposed modification, the examination of projects by the CERC has been removed from the approval process since the projects are approved by the monitoring committee based on the examination of the appraisal committee as per the MoP guidelines. 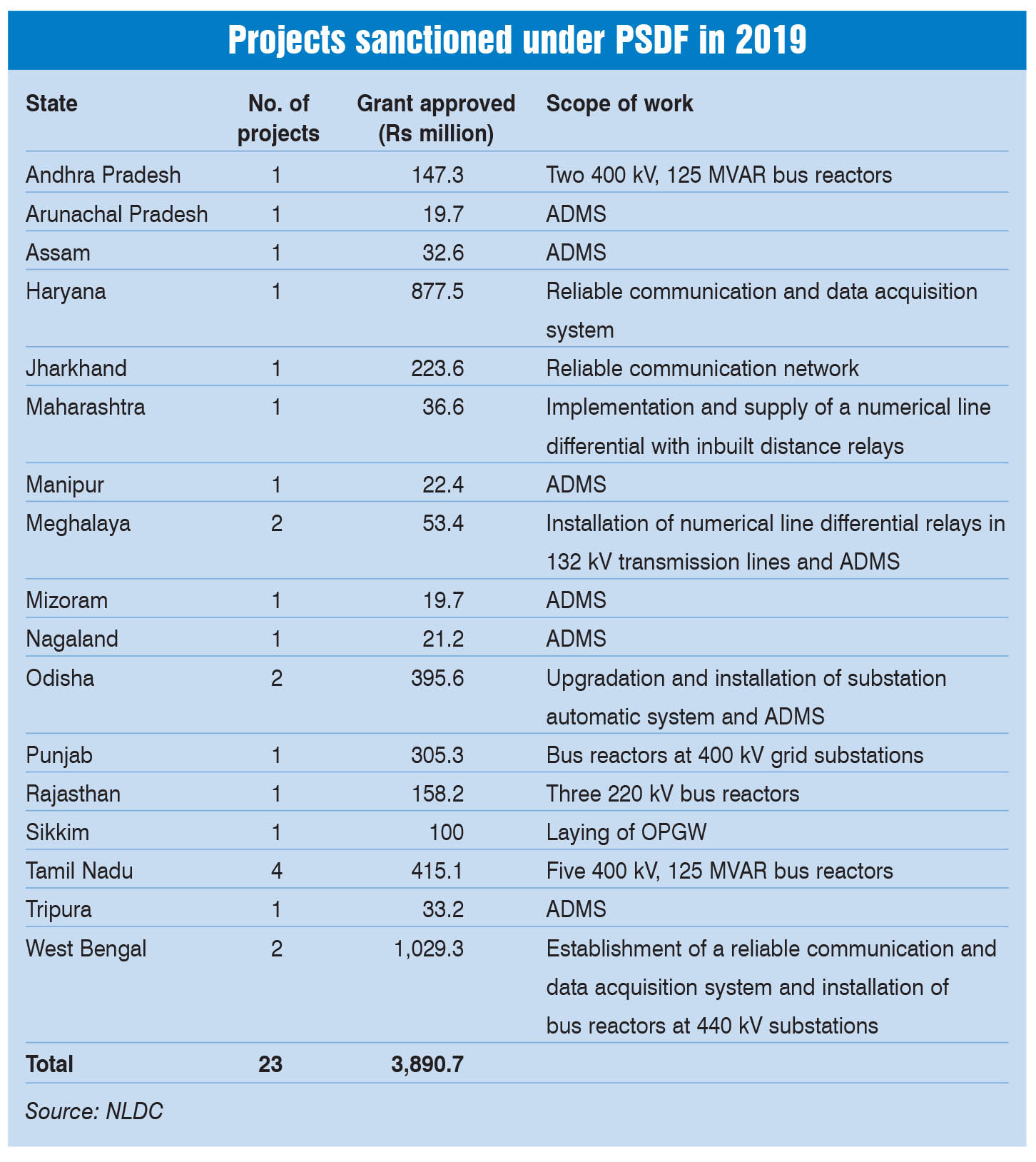 As of April 30, 2019, 141 schemes are under implementation with support from the PSDF. These entail an estimated cost of Rs 203.67 billion, of which Rs 112.82 has been approved to be provided as grant under the PSDF. The disbursements stood at Rs 18.94 billion as of January 31, 2019, accounting for less than 20 per cent of the sanctioned grant. Meanwhile, 52 schemes are under the approval process with an aggregate estimated cost of Rs 32.58 billion and seven schemes have been submitted for the installation of capacitors with a cost of around Rs 6 billion. The appraisal committee has so far returned around 65 proposals with a total cost of around Rs 166.4 citing ineligibility under the PSDF.

The CERC notified draft PSDF Regulations, 2019 on May 24, 2019, modifying the operating, implementation and monitoring procedures of the projects being funded under the fund. The nodal agency will now be authorised to recommend the proposals to the monitoring committee if the activities are covered under the scope of the guidelines and these regulations. Further, the draft regulations propose that the portion of the grant from the PSDF that is used for the project will be reduced from the overall capital cost of the project to ensure that the utility is not given any undue benefit.

In February 2019, the monitoring committee notified the categories of works eligible for funding under the PSDF for a period of one year starting from January 7, 2019. These include the renovation and upgradation of protection systems at the 220 kV and above voltage levels, setting up of a communication network based on optical ground wire (OPGW) by the state utilities at the 132 kV and above voltage levels, roll-out of SAMAST (Scheduling, Accounting, Metering and Settlement of Transactions) and the Automatic Demand Management Scheme (ADMS), installation of load forecasting and renewable generation forecasting tools, capacity building activities and technical studies, and development of a web-based protection database. Any proposal for activity other than these will not be considered for the aforementioned period. Further, the nodal agency will not consider proposals by distribution utilities during this period. In May 2019, 23 projects/schemes were sanctioned across 17 states, mainly related to the installation of ADMS and reliable communication infrastructure. As of January 2019, four detailed project reports from Rajasthan, Andhra Pradesh, West Bengal and Tamil Nadu had been approved for the implementation of SAMAST under the PSDF and another 10 were under examination by the appraisal committee. 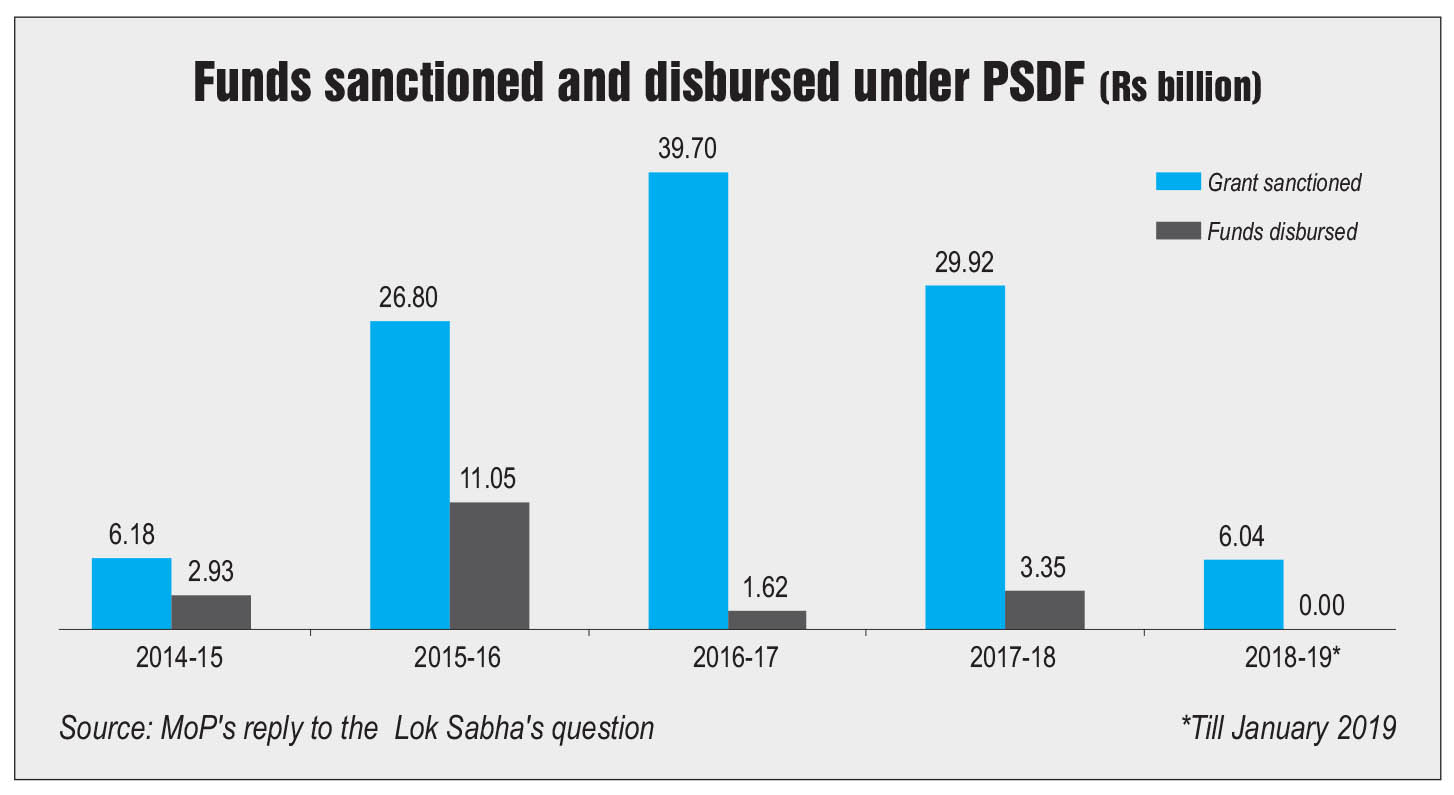 A significant number of projects have been sanctioned under the PSDF since September 2014. Of the Rs 137.8 billion, the total fund transferred from the regulatory pool to the PSDF, sanctions of Rs 102.6 billion had been made up to March 31, 2018. In 2018-19 sanctions of about Rs 6 billion were granted while in 2019-20, sanctions amounting to around Rs 3.9 billion have been granted so far.