Energy generation from municipal solid waste is still at a nascent stage. While the uptake of waste-to-energy (WtE) projects in the country has increased in recent years, capacity addition in the segment has not picked up pace. At present, only 88.5 MW of power is generated from waste. The government has given an impetus to the segment through favourable policy and regulatory measures, and programmes such as the Swachh Bharat Mission (Urban) and the Smart Cities Mission. In 2018, the Ministry of Power revised the Tariff Policy, 2006, under the Indian Electricity Act, 2003, making it mandatory for discoms to purchase power from WtE plants. Moreover, the remunerative tariffs set by the Central Electricity Regulatory Commission have helped increase investor interest in the segment.

The first WtE project was conceptualised in 1985 and was set up in 1987 at Timarpur, New Delhi. Based on incineration technology, the plant produced 3.5 MW of power. However, it soon became inoperative due to variations in the quality of waste received and the plant requirement.

Attempts were made again in 2003, but the projects failed to take off. Two of the main reasons for the failure of these projects were the non-availability of segregated waste and the lack of clarity on the assignment of roles among stakeholders involved in the project. In 2007, new initiatives were taken by the government to subsidise WtE plants and develop a long-term solution and framework for WtE generation in the country. As a result, a number of new WtE plants were set up at Kanpur (15 MW), Timarpur-Okhla (16 MW), Solapur (4 MW) and Pune (10 MW). These projects were developed through special purpose vehicles (SPVs) and revenues were generated through the sale of power to discoms at a specified rate.

Of late, technology adoption in the WtE segment has improved. Urban local bodies (ULBs) are deploying advanced control and automation solutions at WtE facilities. Further, these projects are receiving private sector funding. Companies such as the V-Guard Group have invested in the segment, whereas others such as GJ Nature Care and Energy have a few projects in the pipeline. Meanwhile, ULBs are exploring new business models to ensure the profitability and viability of WtE projects. Waste utilisation  through conversion to green fuels is also being explored.

Projects in the pipeline

Over the past two to three years, state governments and ULBs have announced plans to undertake WtE projects. The Chennai Corporation has recently proposed the development of two WtE plants, at Perungudi and Kodungaiyur. Together, these plants will generate 32 MW of electricity using incineration technology. Detailed feasibility reports for the two plants have been prepared.

The South Delhi Municipal Corporation and the North Delhi Municipal Corporation too have announced plans to develop two WtE plants. These are a 25 MW plant located in Tehkhand, which will process 2,500 tonnes per day (tpd) of waste, and a 15 MW plant in Bhalswa, which will manage 1,500 tpd of waste. The plant at Tehkhand is expected to be completed by December 2019 while the one at Bhalswa is scheduled to be completed by August 2020. Further, the East Delhi Municipal Corporation plans to expand the waste processing capacity of its existing Okhla WtE plant from 1,200 tpd to 2,000 tpd by November 2019. In addition, the civic agency is setting up an integrated waste processing facility in association with NTPC Limited. The location for the project is yet to be decided. It will comprise a WtE plant, a biomethanation plant, an aerobic composter, and a small construction and demolition waste plant. The entire facility will process 2,000 tpd of waste to produce 12 MW of power.

Another unique initiative, proposed by the Kerala government, is a cluster-based integrated solid waste management project. As part of the project, seven WtE plants with a capacity of 5 MW each will be developed at identified locations across the state on a public-private partnership basis. The government has invited bids for WtE plants at Kozhikode, Kollam, Palakkad and Kannur, but the results are awaited. Meanwhile, bids for plants at Thiruvananthapuram, Thrissur and Malappuram are yet to be invited.

A similar initiative has been taken by Haryana. It plans to set up WtE plants in 15 clusters under the Integrated Solid Waste Management Scheme. Currently, a 25 MW capacity WtE plant at Bandhwari village in Gurugram is under construction. The plant is being developed at a cost of Rs 5.2 billion, and is expected to be completed by August 2019. 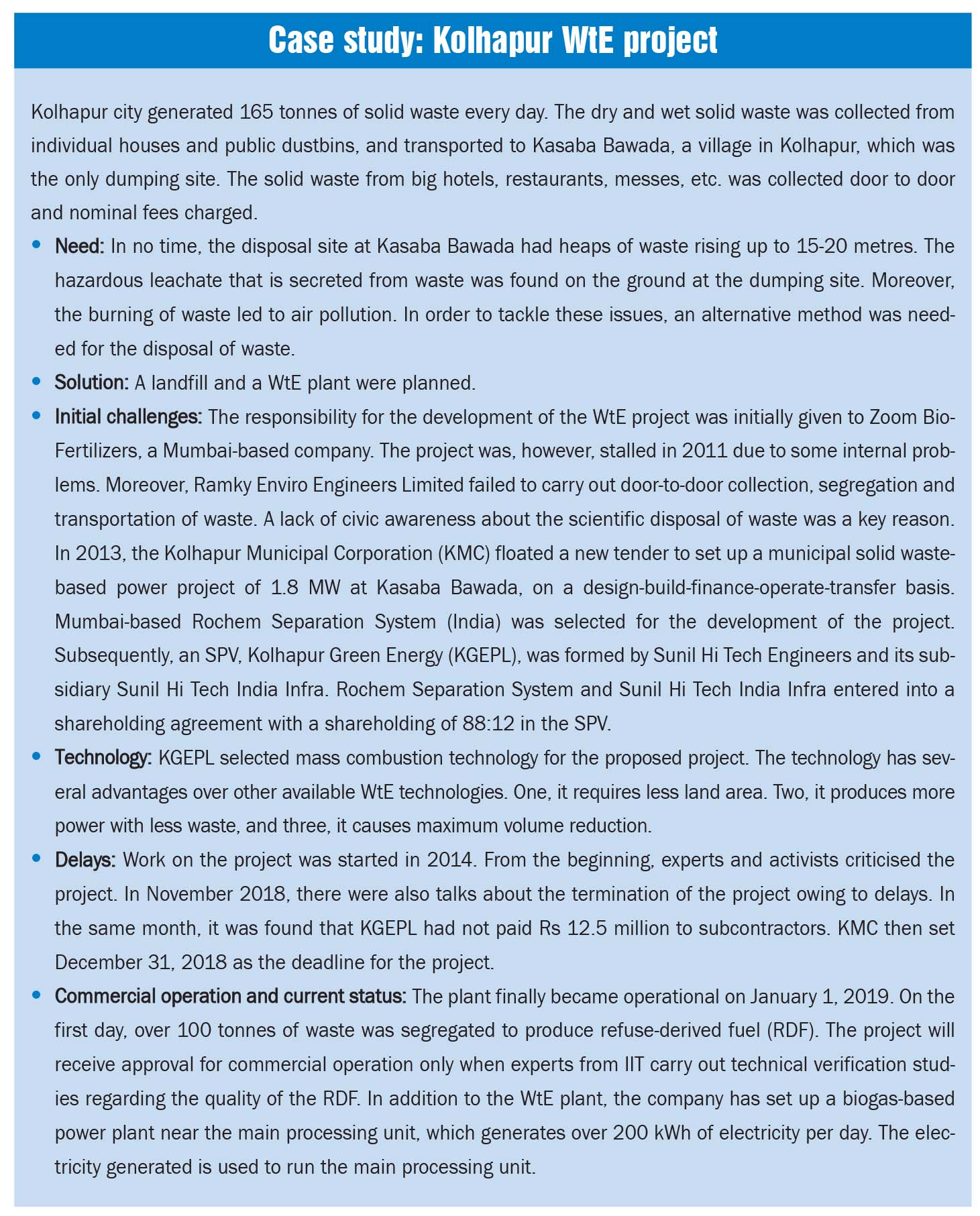 India’s WtE segment has witnessed slow growth in the past. However, upcoming developments in the segment hold promise for stakeholders. Key among these is NITI Aayog’s plan to set up a WtE authority to ease clearance processes, facilitate departmental coordination, etc. However, for a major shift to take place, the challenges pertaining to waste segregation at source, financial constraints, shortage of skilled manpower, and the lack of technical and professional capabilities need to be addressed.

As the economy grows faster and further, the country will face an insurmountable waste crisis unless the government gives waste management high priority. The municipal authorities will have a key role to play in this. Currently, civic bodies are under-resourced, understaffed and subject to political manipulation. Municipalities need to be supported by skilled staff and appropriate technology to ensure the smooth functioning of local recycling and composting systems. Thus, innovative and localised business models and technologies need to be devised for different cities. The revival of interest in WtE projects could lead to the installation of 10 GW of bioenergy generation capacity and help achieve the renewable energy target of 175 GW of capacity by 2022.