According to the International Energy Agency’s (IEA) 4th Annual World Energy Investment (WEI) report  published in May 2019, in India, energy sector investments have grown the most over the past three years, up 12 per cent between 2015 and 2018. Further, renewable energy spending in the country continued to exceed that for fossil fuel-based power in 2018, supported by increasing tendering for solar photovoltaic (PV) and wind energy projects, and the financial unattractiveness of new coal projects.

Overall, the WEI 2018 report notes that, at the global level, after three years of decline, energy investments stabilised in 2018 at over $1.8 trillion, with power accounting for the largest share in the investments. Segment-wise, within the power sector, the investment in coal supply increased marginally while that in energy efficiency remained stable. Geography-wise, China was the largest market for energy investment in 2018, although its lead narrowed. The US and India witnessed their largest increase over the past three years. Power Line presents the key findings of the WEI report…

On the electricity network front, investment in electricity grids dipped by 1 per cent  in 2018. Global spending on transmission grids, around 30 per cent of network investment, increased steadily during the past five years. India’s grid spending grew to over $20 billion, led by transmission, while distribution moderated. The Central Electricity Authority identified a need for $40 billion of transmission spending over the next three years, 60 per cent higher than the current levels. Investment in digital grid technologies rose by almost 10 per cent to $35 billion in 2018. Most of this was in smart meters and grid automation equipment, but spending on EV charging stations rose by 60 per cent to over $3 billion. On the battery storage front, globally, investment rose by 45 per cent to reach $4 billion in 2018. This was driven by strong increases in both grid-scale and behind-the-meter batteries.

With regard to final investment decisions (FID) (that is, decisions to start construction for the first time), for the main sources of large-scale despatchable power – coal, gas, nuclear and hydropower – FIDs fell by a quarter in 2018 to 90 GW, 55 per cent lower than in 2010. In 2018, coal-fired power FIDs declined by 30 per cent to 22 GW, reaching their lowest levels. Most FIDs are now for high-efficiency plants, with inefficient subcritical plants comprising only 10 per cent. In India, FIDs are now largely oriented towards supercritical technology. 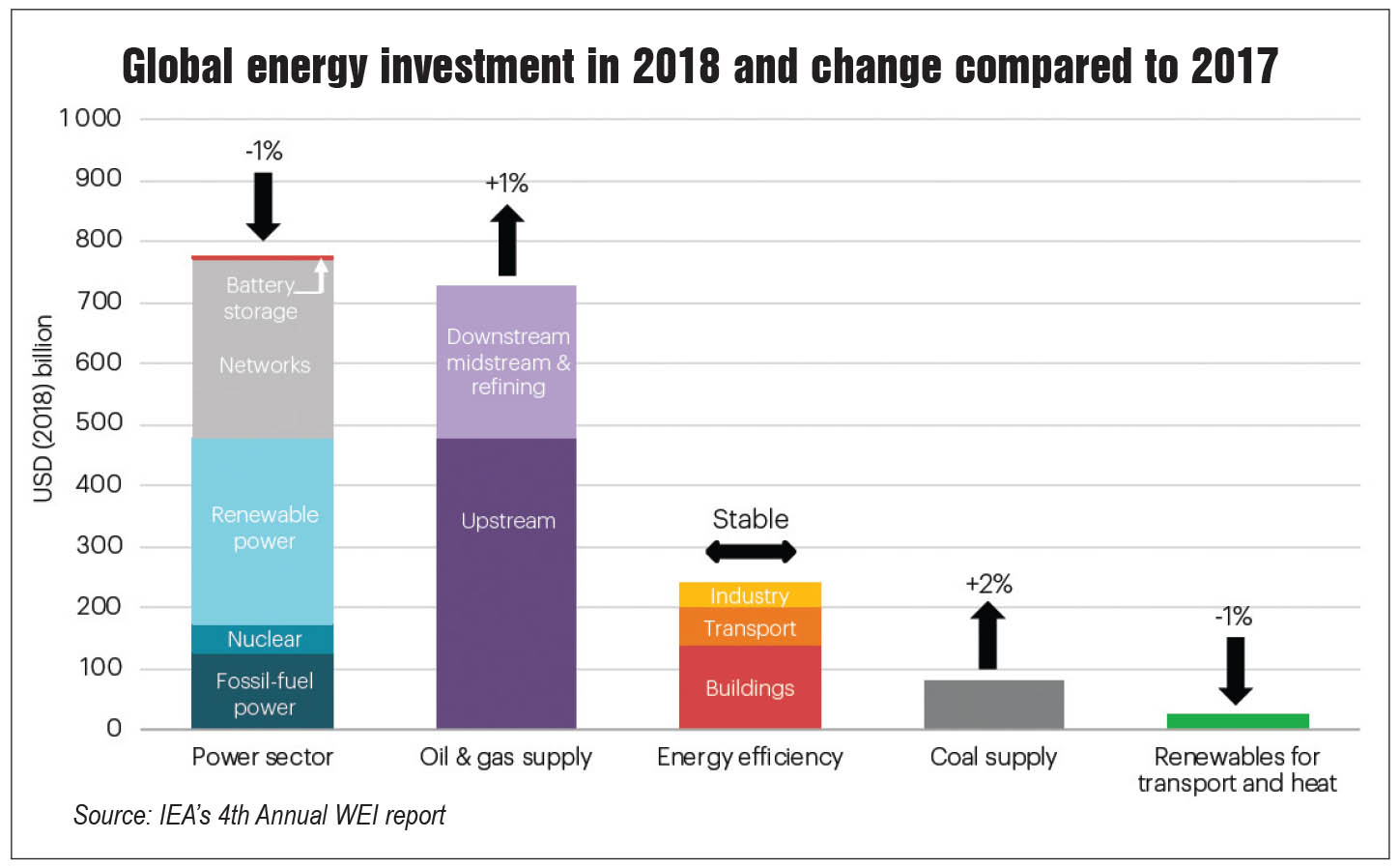 Globally, in 2018, investment in coal supply increased by 2 per cent to reach $80 billion as investment ramped up in almost all the major coal producing regions – China, India and Australia. This has been the first increase since 2012, although investment remains far below the peaks reached in the early 2010s. The investment was towards sustaining production levels at the mines rather than opening new mines. In India, coal supply investment grew by 5 per cent in 2018, underpinned by policy favouring domestic production while reducing imports as much as possible, amid a substantial growth in coal consumption driven by economic growth and higher power demand.

About 85 per cent of power investments in 2018 were financed on the balance sheets of utilities, independent power producers, and consumers (for distributed generation). The use of project finance for financing new projects has grown in recent years, with its largest contribution now in the utility-scale renewable power sector. Green bond issuance for the energy sector – which acts as an important source of secondary financing in connecting the debt capital markets to companies and projects in energy and other sectors that have environmental benefits – rose to nearly $170 billion in 2018. Green bond issuance for energy efficiency remained strong in the Asia-Pacific region and Europe, while the decline stemmed largely from a decrease in the US.

Overall, power investments rely on policies and contracts to manage market risks. Investment in electricity networks strongly depends on regulatory frameworks that enable utilities to recover their fixed investment costs. In 2018, around 45 per cent of utility-scale renewables spending was in projects in which contractual remuneration was determined through competitive mechanisms. These were mostly under government schemes such as auctions, which played an increased role in Europe, India and China, among others. Further, grid investment depends on planning and regulation. On a per capita basis, the highest grid investment was in markets with cost reflective tariff setting and utilities that can adequately recover their fixed costs. 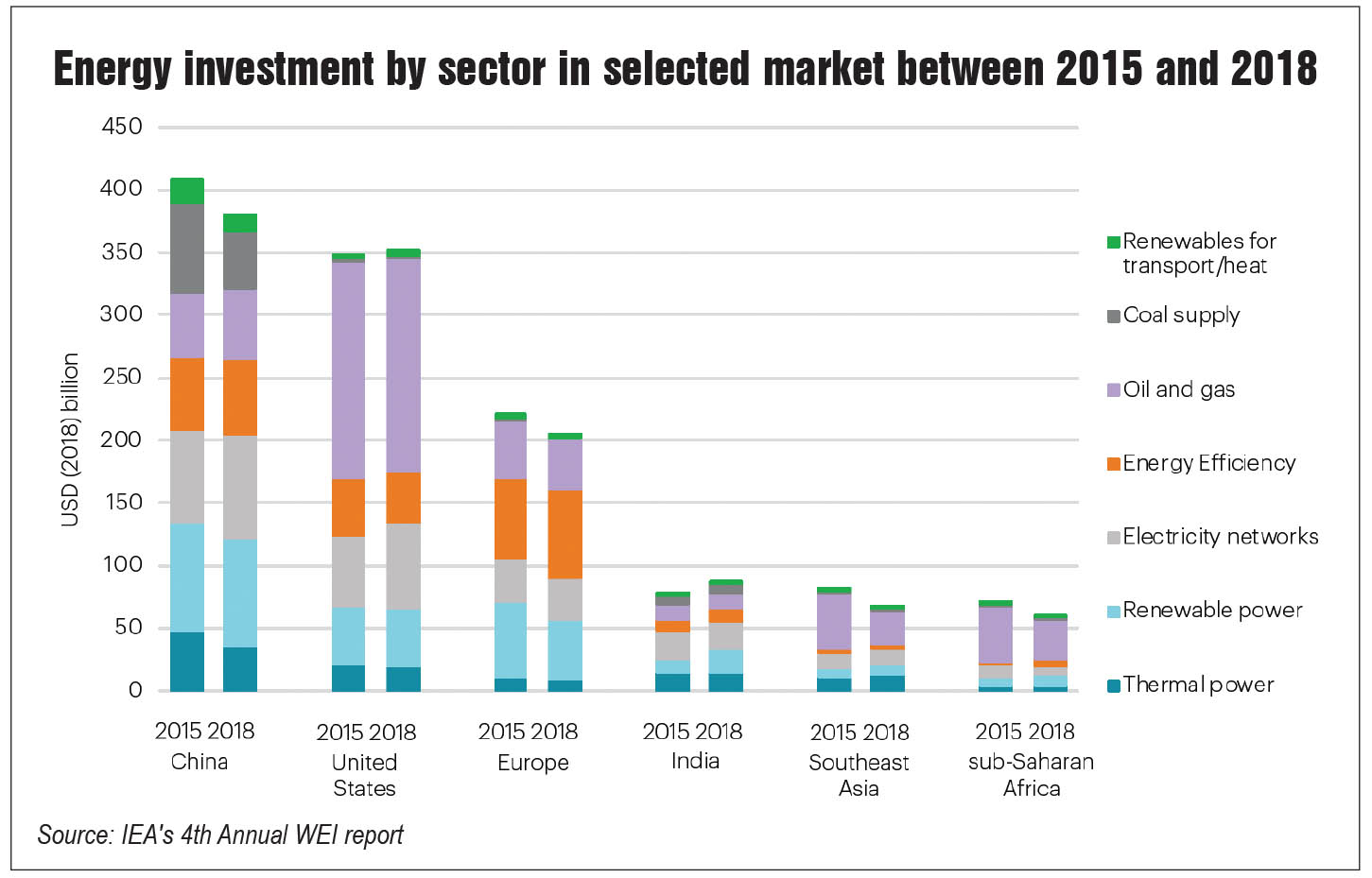 The report notes that government energy research and development (R&D) spending grew 5 per cent in 2018. This trend reflects recent pledges and commitments by governments. The five leading countries for public spending on energy R&D were the US, China, Japan, France and Germany. These five countries accounted for around 70 per cent of all such spending worldwide. The key areas that witnessed an increase in the R&D budget are energy storage, energy efficiency, nuclear and combustion technologies.

Of late, investments in the power sector have stabilised and managed to meet sector requirements. However, it has failed to meet the annual spending projected by the IEA. Investment in the sector needs to align with future needs and challenges, and support the energy transition towards low-carbon sources. Going forward, augmenting energy supply investment with a focus on low-carbon power investment would be instrumental in meeting the Paris Agreement commitments across countries.