The Central Electricity Regulatory Commission (CERC) has recently allowed GMR Warora Energy Limited (GWEL) compensation for the shortage of linkage coal beyond March 31, 2017. The CERC’s order, passed on May 16, 2019, is deemed as a landmark order as this is the first time that the regulator approved compensation for shortage of coal under the SHAKTI scheme.

Vishrov Mukherjee, partner, J. Sagar Associates, who argued the case on behalf of the petitioner before the CERC, remarks, “SHAKTI coal had not been allowed as ‘change in law’ in the previous orders. This is the first order where the CERC has recognised the shortage of coal after March 2017 as “change in law”. This will enable independent power producers (IPPs) to recover compensation for a shortfall in domestic coal for the term of the project, easing cash flow constraints and ensuring timely recovery of the cost of alternative fuel, which was one of the major concerns for IPPs.”

The order spells good news for generators whose petitions are pending with the CERC seeking similar relief. As per ICRA, the order will help the affected IPPs aggregating 14-15 GW that have long-term power purchase agreements (PPAs) with state distribution utilities and face coal supply shortfall from domestic linkage sources.

Facts of the case

GWEL operates a 600 MW coal-based power project in Chandrapur, Maharashtra. The project comprises two units of 300 MW each, which were commissioned in March 2013 and September 2013 respectively. GWEL has PPAs with Maharashtra State Electricity Distribution Company Limited (MSEDCL) for 200 MW, Dadra & Nagar Haveli Electricity Department (DNH ED) for another 200 MW, and Tamil Nadu Generation and Distribution Corporation Limited for 150 MW. The PPA with MSEDCL was executed at a levellised tariff of Rs 2.879 per unit and with DNH ED at Rs 4.618 per unit under the competitive bidding framework.

GWEL was granted coal linkage from South Eastern Coalfields Limited (SECL) through a letter of assurance (LoA) dated October 19, 2006 for 1.327 mtpa of coal and an LoA dated June 3, 2010 for 1.3 mtpa of coal. The genco had premised its bid on these linkages. In October 2007, the Ministry of Coal (MoC) notified the New Coal Distribution Policy (NCDP), which assured existing linkage holders 100 per cent supply as per their normative requirement. Subsequently, the NCDP was modified in 2013 on account of coal shortage and a revised coal supply arrangement was approved for thermal power plants aggregating 78,000 MW commissioned or likely to be commissioned during April 1, 2009 to March 31, 2015. Accordingly, fuel supply agreements (FSAs) were signed for 65-75 per cent of the annual contracted quantity (ACQ) for 2013-14 to 2016-17. GWEL signed FSAs with SECL in 2013 and 2014. Later, in May 2017, the MoC notified the revised policy for coal allocation, SHAKTI. It stipulated that the existing LoA holders should be supplied 75 per cent of the ACQ.

As a result of the changes in the NCDP and the launch of SHAKTI, GWEL was facing shortage of linkage coal and relying on alternative sources leading to additional expenditure. GWEL stated that it had been receiving 65-79 per cent of its ACQ since 2013-14 and the shortfall in linkage coal had a financial impact of Rs 882.9 million under the MSEDCL PPA and Rs 763.2 million under the DNH PPA.

Therefore, GWEL filed a petition with the CERC seeking compensation for the “change in law” events that led to a shortfall in linkage coal. The petition also sought compensation on other grounds such as change in excise duty on coal, change in royalty and clean energy cess, and busy season and development surcharge under the “change in law” provision. The commission passed an order dated February 1, 2017, allowing certain claims but disallowing others including the shortfall in linkage coal. Aggrieved by the order, GWEL approached the Appellate Tribunal for Electricity (APTEL), which passed a judgment dated August 14, 2018 in its favour and remanded the matter back to the CERC for consideration. APTEL ruled that the issue needed to be thoroughly re-examined by the CERC in terms of the Energy Watchdog judgment by considering the change in the NCDP as a change in law event. The Energy Watchdog judgment refers to an order of the Supreme Court dated April 11, 2017 (Prayas Energy Group vs CERC, and other petitions), which allowed tariff relief for projects affected by domestic coal shortfall under change in law.

However, the respondents (MSEDCL, DNH ED and the Prayas Energy Group) contended that the change in law is to be seen in light of the present case and there is little difference in coal allocation/FSA coal quantities supplied to GWEL pre- and post changes in the NCDP. Further, APTEL’s judgment is based on the Energy Watchdog judgment, which itself does not comment on whether SHAKTI forms a part of the NCDP or is a change in law.

Further, GWEL submitted that its original claim was not limited to coal supply till March 31, 2017. Moreover, the shortfall in linkage coal persisted beyond March 31, 2017, for which GWEL is entitled to be compensated. The respondents objected to this as the Supreme Court had considered compensation on change in law on account of the NCDP, 2013 only till March 31, 2017. Therefore, according to the respondents, GWEL should not try and enlarge the scope of remand to include the SHAKTI scheme.

The CERC ruled that the submissions of the respondents are based on misconceptions, and APTEL and the Supreme Court have not expressed any opinion on the period for grant of compensation. As per the Energy Watchdog judgment, any change in the assurance of coal supply under the NCDP, 2007 is a change in law for which relief can be claimed.

The commission held that since both the NCDP, 2013 and the SHAKTI scheme have been issued by the MoC and both alter the assurances provided in NCDP 2007, compensation should be granted to GWEL. According to the CERC, “The shortfall in coal supply is a continuous cause of action and the SHAKTI scheme acknowledges and recognises such shortfalls with reference to NCDP 2013. In the above background, the consideration of relief on account of shortfall in the supply of coal beyond March 31, 2017 falls within the ambit and scope of remand of the tribunal. Accordingly, we proceed to examine the relief sought by the petitioner on account of change in law for shortfall in the supply of coal for the period beyond March 31, 2017.”

Accordingly, the commission approved a methodology for compensating GWEL on account of shortage of linkage coal. It also approved relief for change in law due to coal quality changes, busy season surcharge, development surcharge, and the carrying cost. 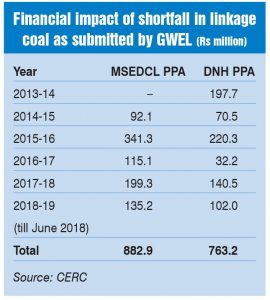 Impact and the way forward

The industry has reacted positively to the CERC’s order as it addresses one of the foremost concerns of gencos facing domestic coal shortage. As per the Association of Power Producers, the decision will resolve the issue impacting 15 GW.

Sabyasachi Majumdar, group head, Corporate Ratings, ICRA, says, “The tariff relief approved by the CERC culminates a long-drawn process for domestic coal-based IPPs seeking pass-through of the higher cost of imported coal under the PPAs signed with state distribution utilities owing to the shortfall in domestic linkage coal supply. However, the timely realisation of the tariff relief from discoms will remain a challenge given the weak financial position of the discoms in some of the key states and as the tariff relief component including the carrying cost is likely to remain significant.” It is estimated that for a 1,000 MW coal-based power project operating at 50 per cent plant load factor, the use of imported coal for meeting 25 per cent of the fuel requirement will increase the annual fuel cost of generation by about Rs 1.3 billion at the prevailing imported coal prices.

In sum, the CERC’s order is indeed a positive one and similar orders for gencos seeking such relief are expected in the near future. This will help improve investor sentiment in the generation segment, which has long been in the doldrums. That said, without structural changes in discoms, the payment of dues to gencos is likely to suffer.