Transformers are the key components of a power grid. They regulate the voltage of electricity while delivering it from the point of generation to the end consumer. They feed power from power plants and decentralised energy systems into the grid, and convert high voltage power into low voltage power so that it can be used in industries and households.

The transformers used in the transmission network are at higher voltages (400 kV, 200 kV, 110 kV, 66 kV, 33 kV) and are typically rated above 200 MVA, whereas distribution transformers are at low voltages (11 kV, 6.6 kV, 3.3 kV, 440V, 230V) and are rated up to 200 MVA. With steady investments in the transmission segment and ongoing reforms in the distribution segment, the transformer industry is on a growth trajectory. Over the years, the Indian transformer market has not only expanded its manufacturing capacity, but has also matured in terms of technology.

An overview of the transformer market in India…

In recent years, the transmission segment has seen significant growth across 765 kV, 400 kV and 220 kV alternating current (AC) voltages and 800 and 500 direct current (DC) voltages. This has increased the demand for power transformers. As of June 30, 2019, the total transmission line length stood at 415,517 ckt. km, AC transformer capacity at 890 GVA and high voltage direct current (HVDC) transformer capacity at 22.5 GVA. The 220 kV voltage transformers account for the highest share in the transformer market with a total capacity of 356 GVA. In recent years, the highest growth has been witnessed in the 220 kV and 400 kV categories while the HVDC segment has remained more or less constant. Going ahead, extra high voltage substations (HVDC and 765 kV) will gain focus in view of the planned capacity additions for the coming years. The capacity of the 765 kV transformer category is targeted to be increased to over 280,000 MVA from the current level of 213,000 MVA. Meanwhile, as Powergrid takes up the execution and implementation of intra-state transmission projects, the demand for power transformers at 400 kV and below levels is likely to rise significantly. 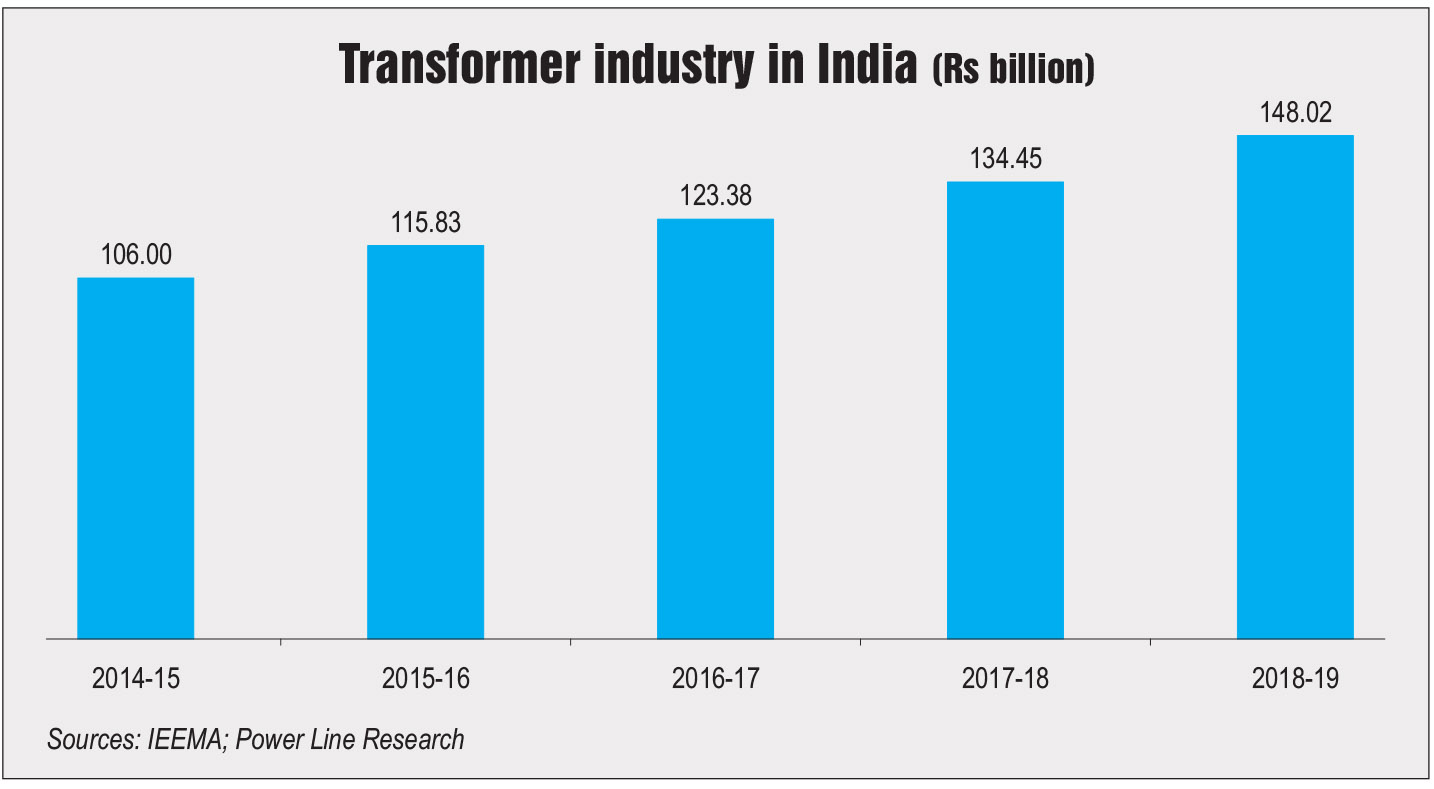 The government’s target to provide 24×7 quality power to every household has given a significant boost to the demand for distribution transformers. Schemes like the Deendayal Upadhyaya Gram Jyoti Yojana, the Integrated Power Development Scheme and Saubhagya, aimed at strengthening sub-transmission and distribution networks in rural and urban areas, and improving electrification in the country, have also increased transformer demand among utilities. Further, utilities have stepped up their efforts to replace the ageing and inefficient fleet of transformers in order to improve efficiency and augment capacity.

The government plans to increase the fleet of EVs in the country with a target of 30 per cent EVs by 2030. With this, the existing distribution transformers are likely to face overloading. Hence, either these transformers will be replaced or more transformers will be added to cater to the additional demand from EVs. Metro rail projects and railway electrification projects have also contributed to the increase in demand for distribution transformers given the increased government spending in this segment. Meanwhile, to achieve the government’s renewable energy target of 225 GW of installed capacity by 2022, a significant generation capacity is being continuously added and a number of transmission lines and substations are being constructed. This is also driving the demand for transformers. Further, the upcoming smart grids and smart cities are creating demand for HVDC converter transformers and advanced transformers equipped with intelligent electronic devices. Besides an increase in domestic demand, exports are expected to increase. 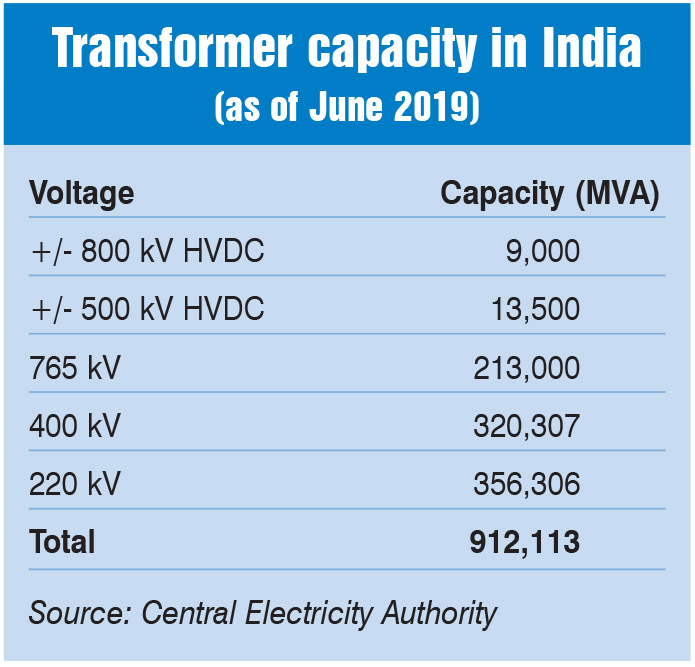 The supply of cold-rolled grain-oriented (CRGO), the key raw material for the manufacturing of transformers, is one of the major challenges facing the transformer industry. CRGO is not produced in India and needs to be imported. Low supply and price fluctuations hamper the production of transformers. Due to the inadequate supply of CRGO steel, there is a huge volume of low grade/ defective CRGO steel coming into the market despite being banned by the quality control order. This is severely affecting the quality and cost of transformers. There is an urgent need for a local CRGO steel manufacturing facility, but no concrete steps have been taken towards this yet. Thus, manufacturers need to plan and forecast their material needs more efficiently.

Other key issues affecting the transformer industry are related to the Bureau of Energy Efficiency (BEE) quality control order, which requires dual certification of transformers from the Bureau of India Standards and BEE, payment delays from state utilities, and the lack of adequate testing facilities. While the BIS certification has improved the quality of transformers and reduced the failure rate and the BEE star labelling has promoted the use of modern technology for manufacturing energy efficient transformers, the dual certification is a lengthy process. In certain cases, the renewal applications have remained pending for more than two months, resulting in non-acceptance of transformers by discoms. Another concern is the lack of adequate testing facilities for transformers, particularly in the high voltage and ultra high voltage segments. The delay in payments by utilities has always been a cause for concern for transformer manufacturers. While their payment position has improved since the launch of the Ujwal Discom Assurance Yojana, the process needs to be further streamlined. Other challenges faced by the industry include lack of mandatory guidelines for the installation and maintenance of transformers, overloading of transformers, tampering of protection equipment, theft of material/oil, which leads to fire and failure of transformers. The failure rate of distribution transformers in India is very high at 15-20 per cent as against 1-2 per cent in developed countries. Also, domestic transformer manufacturers are increasingly facing competition from foreign manufacturers, especially those from the UK and Japan.

The demand for transformers is expected to increase in the coming years with the increase in generation capacity and per capita consumption. An estimated investment of Rs 2.6 trillion in the transmission sector is required to meet the future peak load, which is expected to reach over 230 GW by 2021-22. The majority of these future investments are likely to be spent on the expansion of physical grid infrastructure, including 230,000 MVA of transformer capacity. Besides, the demand for energy efficient and smart transformers will increase as old transformers will be replaced with new ones. The concept of smart transformers is also expected to see greater application with the growing focus on reliability of supply and reduction of system losses.