Banks now have more leeway in dealing with defaulters with the Reserve Bank of India (RBI) coming out with a diluted version of its February 2018 circular on defaulting companies, which was struck down by the Supreme Court. In essence, the diluted norms will give stressed borrowers more time to come up with a repayment plan. Specifically, the revised circular increases the period to implement a resolution from 180 days to 365 days. For the power sector, where lenders have an exposure of around Rs 2 trillion, the new circular has come as a huge breather.

To recall, the Supreme Court had, through its order dated April 2, 2019, held the RBI circular of February 12, 2018 on the Resolution of Stressed Assets as ultra vires. The Supreme Court order followed a petition filed by the central bank challenging the Allahabad High Court order, which had asked the RBI and the finance ministry to treat power sector non-performing assets (NPAs) separately as their woes were mostly driven by external factors. The promoters of power projects under implementation were the worst hit by the February 12 circular as many of their projects were stuck because of policy issues beyond their control.

Highlights of the new circular

According to industry watchers, the central bank has managed to retain most of the elements of the February 12, 2018 circular in the new one. There is no restoration of dispensation schemes such as Strategic Debt Restructuring (SDR) or S4A. Bankers will continue to recognise defaulters as special mention accounts from day one of default.

Further, the RBI has kept the interest of dissenting creditors in mind by making inter-creditor agreement (ICA) mandatory. In cases where a resolution plan is to be implemented, all lenders are required to enter into an ICA. Banks have sought a clarification on this clause as the ICA agreements, as they stand today, would need to be rewritten or new clauses would have to be inserted and the agreements newly signed. Reportedly, 37 banks had already signed ICAs last year. (This allowed the lead lender to formulate a resolution plan for stressed assets in the range of Rs 0.5 billion-Rs 5 billion and required only 66 per cent lender approval, instead of 100 per cent earlier.)

According to the banks, the existing ICAs will have to incorporate two key changes based on the new RBI circular, which requires the approval of 76 per cent of lenders by value and 60 per cent by number for taking decisions. Earlier, the voting threshold was 66 per cent by value (similar to the Insolvency and Bankruptcy Code). The RBI has also said that the resolution plans under way, as on the date of the circular, may be pursued by lenders under the revised framework, subject to meeting specific conditions. The RBI has also made it easier for banks to upgrade stressed assets, while putting safeguards in place.

While the revised RBI circular on stressed assets does offer some reprieve, more steps will be needed to address the issues of the sector, note industry representatives.

The Association of Power Producers (APP) points out that a key cause of stress in the sector are the delayed payments by discoms. Hence, a payment security mechanism needs to be put in place at the earliest. Another issue is the preferential treatment to central power companies, which is one of the causes of stress in the private generation segment. Further, it notes that the operationalisation of the High Level Empowered Committee’s (HLEC) recommendations is important for resolving the stress in the sector. These include the non-lapsing of the shortfall in coal supplies to the power sector for three months, increase in the quantity of e-auction coal for the power sector, and allowing the usage of linkage coal for sale of power in the short-term market through the power exchanges and the DEEP portal.

According to ICRA, while the provision for a 30-day review period is positive for the lenders, it may not be sufficient to find solutions for stressed assets in the power sector. As per ICRA’s estimates, about 40 GW of coal-based capacity is under stress owing to a mix of issues, including the absence of long-term power purchase agreements (PPAs), unviable tariffs in PPAs, an absence of coal linkages, delays in project implementation and the inability of promoters to secure funding for completing projects. In addition, about 12 GW of gas-based capacity in the private sector is stranded or under-utilised due to the lack of availability of domestic natural gas and the high cost of generation for using imported R-LNG. It adds that the augmentation of coal supplies along with the signing of new PPAs by the discoms remains crucial for reviving operational coal-based power projects that are under stress. However, the revival of stressed under-construction projects is an uphill task, unless there is a sharp growth in electricity demand, given the significant funding needed to revive and complete these projects and given that the majority of the projects do not have PPAs.

Meanwhile, the Federation of Indian Chambers of Commerce and Industry has urged the RBI to make some changes in the circular itself. It has recommended the upgrade of a default account under loan restructuring upon payment of 10 per cent of the outstanding principal and capitalised interest, against the earlier 20 per cent, to enable quicker asset turnaround considering the dependence on regulatory decisions and payments by state discoms. The industry body has also recommended configuring a liquid fuel segment that can align with the power market and facilitate the supply of coal and gas to power plants wanting to enter into flexible and shorter duration contracts. 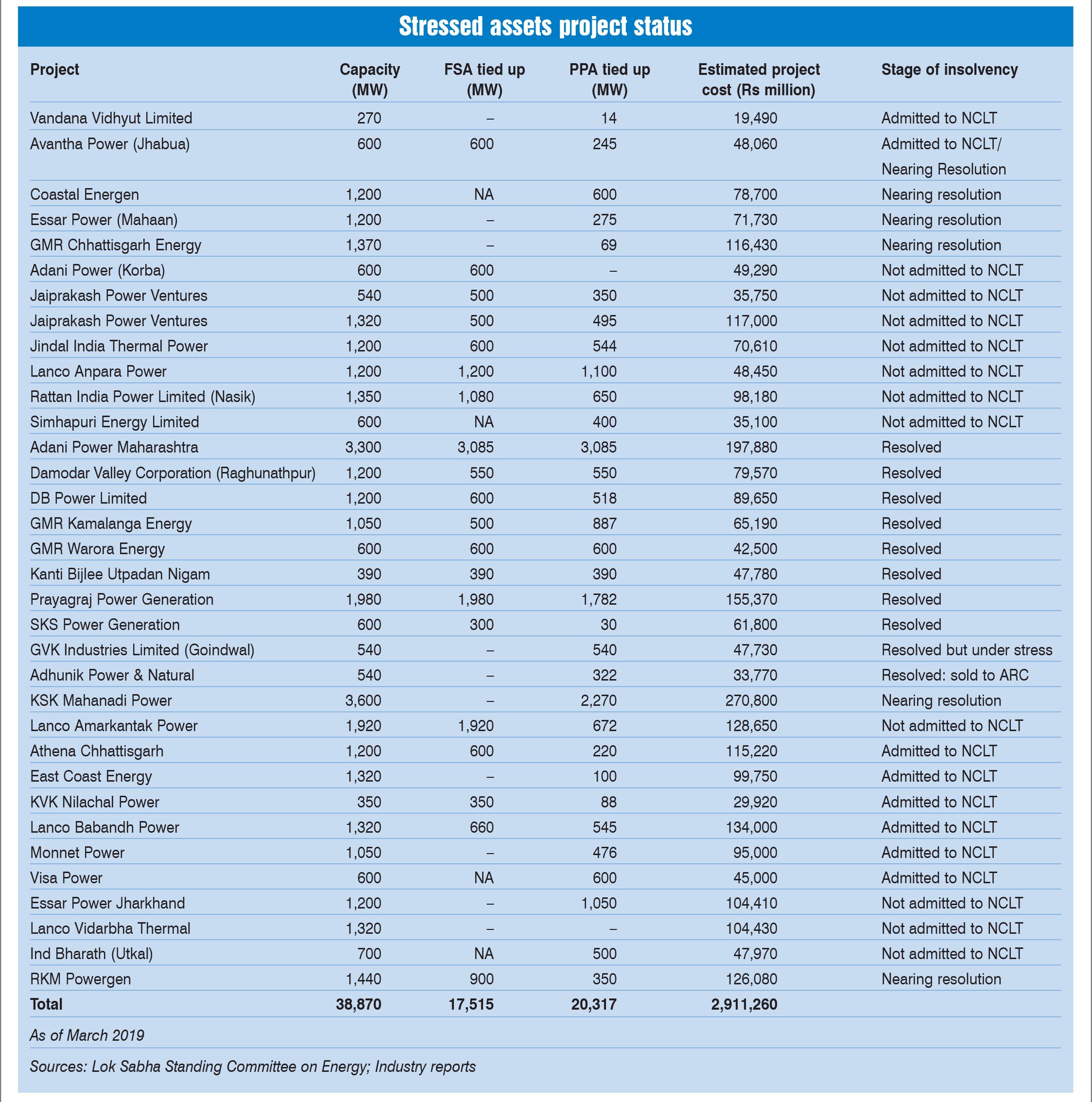 In the short term, more relief for stressed assets can be expected with several policy proposals in the pipeline. To help banks address the problem of stressed assets, the power ministry is reportedly considering issuing an advisory to the regulators to abstain from lowering the tariffs of stressed power assets that change hands as part of the debt resolution mechanism. A provision is proposed to be made in the tariff policy in this regard.

The issue had surfaced recently with regard to the resolution of Jaiprakash Associates’ stressed 1,980 MW Prayagraj project outside the insolvency court. In November last year, Tata Power had announced that the share purchase agreement to acquire 75.01 per cent stake in the project had been signed by Renascent Power (backed by Tata Power and ICICI Bank) with a consortium of lenders. However, the deal is now facing regulatory challenges as the Uttar Pradesh Electricity Regulatory Commission has taken the view that since the bidder has acquired the asset at a discount, it needs to cut tariffs.

Earlier, Adani Power had withdrawn its offer to acquire the KSK Mahanadi project in Chhattisgarh, stating that the acquisition had become unviable. Uttar Pradesh Power Corporation Limited, one of the key customers of the KSK Mahanadi project, decided to reduce tariffs for procuring power by almost 32 paise per unit, making the acquisition at the stated price unviable. Meanwhile, the power ministry is also planning to issue an order shortly to introduce a payment security mechanism on the principles of a prepaid system to ensure prompt payments. As per the proposal, discoms will have to furnish letters of credit to load despatch centres before power from gencos is allowed to flow to the states. The despatch centres will limit the flow of power to the quantum covered by the letters of credit provided.

Also, stressed power projects that have no takers for power will finally be able to sell power to NHPC Limited. The PSU major would facilitate the procurement of power for three years from coal-based power plants that are already commissioned and do not have PPAs under Pilot Scheme II, under which NHPC has been appointed as the aggregator. A tariff of Rs 4.41 per kWh was discovered under this scheme through e–reverse auctions. “In some cases, proposals are at an advanced stage of finalisation and NHPC will make all-out efforts to tie up the entire 2,500 MW of power. As per the scheme, NHPC is supposed to tie up the above power by September 30, 2019,” stated NHPC in a recent press release.

As per industry reports, eight of the 34 stressed assets (as per a list prepared by the power ministry) have been resolved while another eight to nine projects are at an advanced stage of resolution. The projects nearing resolution are KSK Mahanadi Power, GMR Chhattisgarh Energy, Avantha Power (Jhabua) and Coastal Energen. Also, Adani Power is expected to win the bids for Coastal Energen, KSK Mahanadi Power and GMR Chhattisgarh Energy.

For the remaining projects, where not much headway has been made in resolution or projects where resolution plans have come to a standstill as banks are wary of further vigilance action, the RBI’s new circular is an important development. It gives lenders clarity on the way forward in taking projects to their logical conclusion.