Established in 2002, Bangalore Electricity Supply Company Limited (BESCOM) is the largest discom in Karnataka accounting for 45-50 per cent of total energy sales in the state. The discom has a high level of operational and financial performance capability. It received an “A” rating in the last round of annual integrated ratings conducted by PFC in July 2018. It has been able to bring down its aggregate technical and commercial (AT&C) losses from over 18.06 per cent in 2014-15 to 14.03 per cent in 2018-19. Over the past five years, the company has also improved its financial performance, posting strong revenue and net profits.

The discom has been at the forefront of implementing several new technologies. Last year, it launched a real-time distribution automation system project with funding from the Japan Bank for International Cooperation for optimising its power network in Bengaluru, which is the first large city in India under the R-APDRP to have completed the GIS-based consumer and network asset survey.

Meanwhile, BESCOM’s ambitious smart metering pilot project is nearing completion, and will soon begin to roll out smart meters in the state. The discom has rolled out several customer-friendly services like mobile apps, 24×7 SMS, and consumer grievance redressal facilities. Going forward, the discom is preparing a blueprint for setting up electric vehicle (EV) charging stations across Karnataka. Further, initiatives for underground cabling, distribution infrastructure augmentation and the adoption of digital technologies are planned. 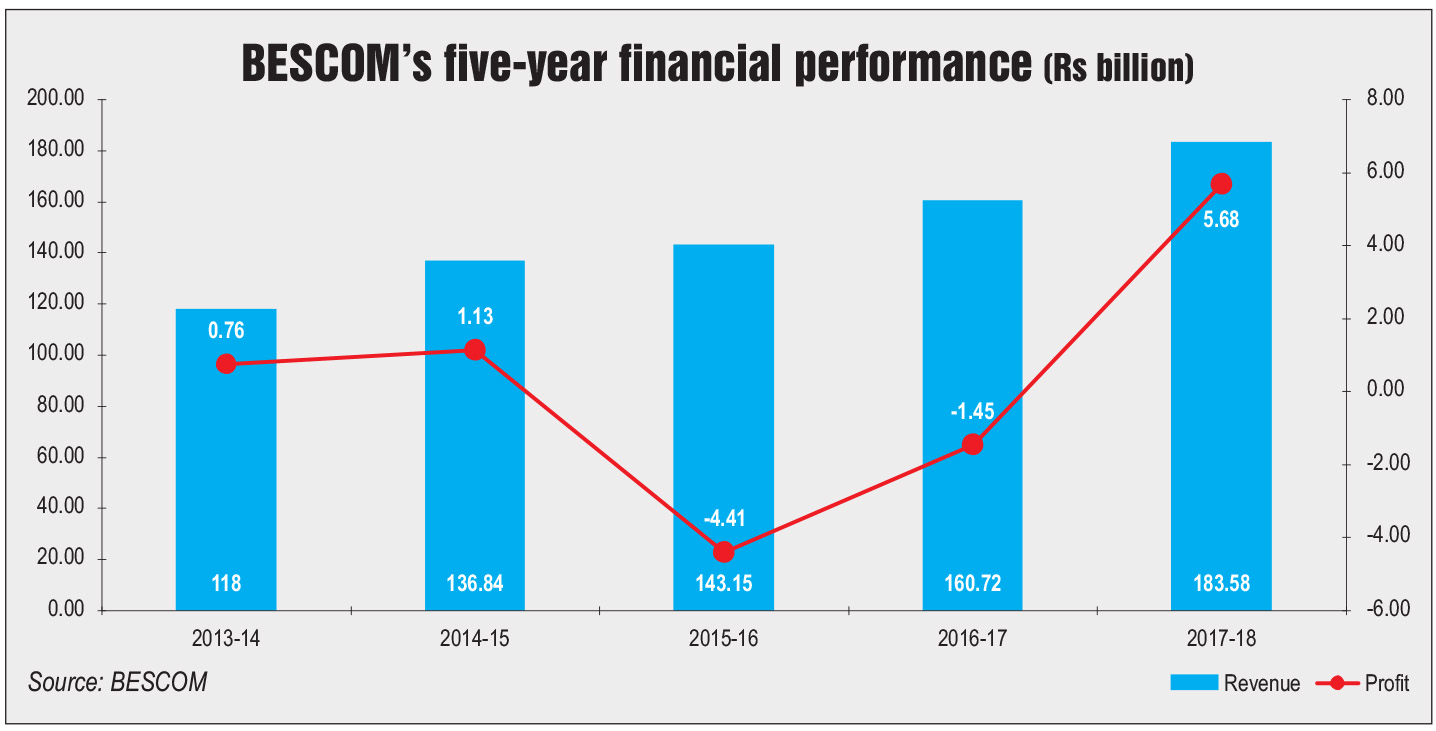 In 2017-18, BESCOM registered revenues of Rs 183.58 billion up from Rs 160.72 billion in 2016-17. Its net profit stood at Rs 5.68 billion in 2017-18 as compared to a net loss of Rs 1.45 billion in 2016-17. From 2013-14 to 2017-18, the company recorded a CAGR of 11.68 per cent in revenues and 65.34 per cent in net profits. The ACS-ARR gap of the discom stands at Rs (0.02) per unit as per the UDAY portal accessed on July 23, 2019. However, the discom depends heavily on short-term borrowings mainly from government departments, subsidy receipts from the Karnataka government and energy balancing dues from other discoms. In addition, Karnataka has a free power supply policy for agriculture consumers. On the capex front, the company incurred a capex of Rs 32 billion in 2017-18. Of this, a total of Rs 1.05 billion was used for the Integrated Power Development Scheme (IPDS), Rs 525 million for R-APDRP, Rs 451 million for meter programming and Rs 95 million for the Deendayal Upadhyaya Gram Jyoti Yojana, among other areas.

A key initiative being taken by the utility is the setting up of EV charging stations. BESCOM has been declared as a state nodal agency for Karnataka for setting up EV charging infrastructure. “BESCOM has taken up the task of setting up five model charging stations. We are in the process of setting up another 120 charging stations by August this year across Bangalore,” informed C. Shikha, managing director, BESCOM, at the India Smart Utility Week 2019 event in New Delhi earlier this year. The discom is also considering setting up charging stations at highways. Meanwhile, the discom is exploring ways to combine solar power and EV charging projects. Apart from EVs, the discom plans to soon complete the pilot test of its one-and-a-half-year-old smart metering project with 1,200 meters in Chandapura. The project was launched in collaboration with the Indian Institute of Technology-Banaras Hindu University and the Center for Study of Science, Technology and Policy. It is being funded by the Department of Science and Technology. Post completion of the pilot, the discom will officially launch smart meters by the end of July 2019. Another major ongoing project is underground cabling. In June 2019, BESCOM approved an underground cabling project entailing a total cost of Rs 53 billion to be implemented over three years. The project will be implemented in three phases and plans to convert 6,900 km of overhead lines into underground cables. The first phase, starting from July 2019, will stretch for 18 months and entail an expenditure of Rs 18.7 billion. The discom is planning to lay optical fibre cable alongside the new underground cables in order to establish its own communication system.

On the network upgradation front, BESCOM soon plans to complete the replacement of 3,000 regular transformers with specially designed transformers. It has so far relocated or replaced 2,611 transformers, with the highest number of replacements in the east circle. The new transformers are compact in size and are raised to a certain height so as to minimise hazards.

In June 2019, the company signed an MoU with Tata Power Delhi Distribution Limited (Tata Power-DDL) to exchange best practices and solutions for renewable energy storage and smart metering. BESCOM has also implemented various measures in rooftop solar. During 2014-18, the company commissioned 1,247 rooftop solar plants aggregating 95 MW in capacity. Under IPDS, rooftop solar works worth Rs 88 million are currently under progress. The total approved cost for BESCOM under the scheme is Rs 5.44 billion, of which Rs 2.48 billion has been released so far. The company is also planning to deploy AI tools to handle customer complaints through interactive chat and voice bots, and has invited tenders to this end. It will take six to eight weeks for the project to be implemented once the bidder is finalised. In the second phase of the project, it will add customer engagement features as well.

The power purchase cost (PPC) for BESCOM depends on the availability of power supply from long-term sources, mainly Karnataka Power Corporation Limited. Any shortfall in availability may lead to a spike in the cost of power. The discom cannot pass on the increase in PPC to the consumers under the existing quarterly framework of the Financial Conduct Authority (FCA), states an ICRA report. Since the variation in the PPC is approved during the annual true-up process, there is a lag in its adoption.

Going forward, BESCOM’s initiatives to improve the customer experience and implement schemes in various domains are expected to deliver results in the coming years. The utility still needs to reduce its dependence on long-term sources to avoid incurring high power purchase costs.