The year 2018-19 was an eventful one for the country’s renewable energy sector. India jumped three places to become the second-largest clean energy investment market worldwide as per the Bloomberg New Energy Finance’s Climatescope 2018 report. The first solar-wind hybrid auction was successfully conducted with the lowest tariff at Rs 2.67 per kWh being comparable to solar and wind power tariffs. The floating solar and rooftop solar segments also witnessed many large tenders. The solar pumps segment received an impetus with the launch of the Kisan Urja Suraksha evam Utthaan Mahabhiyan. Hydropower was brought under the renewable energy sector in the hope of re-energising investments in the segment. With low power tariffs and a short gestation period as compared to fossil-fuel based plants, renewables have become the preferred choice for developers and investors alike, leading to the emergence of new entrepreneurs offering a range of services. Hence, the country has achieved 80.47 GW of installed renewable energy capacity (as of June 2019) in a short span of time, with the share of renewables in the total generation mix increasing from 7.06 per cent in 2018-19 to 9.7 per cent in 2019-20 for the April-May period.

However, the renewable energy sector has its own set of challenges. The year 2018-19 saw a fall in capacity additions due to a number of reasons. The lack of availability of adequate land and transmission infrastructure led to delays in tenders and project commissioning. The constantly changing policy regime with an unplanned levy of 25 per cent safeguard duties on solar cell imports halted all major solar development activities in the past year. Meanwhile, in the wind segment, wind turbine manufacturers continue to be in poor financial health. Visibility remained low for developers as certain discoms and tendering agencies cancelled or delayed tenders due to higher tariff bids, while some states resorted to increasing wheeling and transmission charges for renewable energy projects. Developer and investor interest took a further hit with a negative macroeconomic environment with rising interest rates, depreciating currency, liquidity constraints and credit quality concerns. Even so, policymakers are quite confident that the temporary lull in the sector will pass and the target of 175 GW will be achieved as planned, by 2022.

With an installed capacity of 29.55 GW as of June 2019, solar power has a share of 36.72 per cent in the country’s total renewable power base. Driven by large capacity tenders and rapid installations, solar power was the leader in terms of new capacity additions during 2018-19. Some of the world’s largest solar parks are coming up in the country while mega projects such as the 1 GW ultra mega project in Kurnool, Andhra Pradesh, and the Adani Group’s 648 MW Kamuthi project in Tamil Nadu are already operational. Such projects have led to India becoming one of the world’s leading solar power markets.

In the past, greater economies of scale, the entry of global players, the availability of foreign funding and a fall in module prices led to a dip in solar tariffs. However, in recent months the tariffs witnessed a high degree of fluctuation due to policy uncertainties. In July 2018, a 25 per cent safeguard duty was announced on solar cells imported from China and Malaysia for the next two years, to safeguard the interests of domestic manufacturing firms. There was a round of discussions followed by stay orders by two state courts that were finally overruled by the Supreme Court in September 2018. The tariffs started increasing slowly in early 2018 due to transmission constraints and uncertainty about safeguard duties. Subsequently, the tariffs started to drop again after the uncertainty over the safeguard duties was resolved.

Despite tall targets and the government’s efforts to promote uptake, growth in the rooftop solar segment remains modest. Only 732.73 MW of rooftop solar capacity was added during 2018-19, against a target of 1,000 MW, casting doubts on whether the 40 GW target can be achieved by 2022. As of June 2019, only 253.94 MW of rooftop solar capacity has been added, against 1,114.75 MW of capacity additions in the ground-mounted space. That said, with a number of positive policy and technology developments taking place, the pace of installations is expected to pick up.

The impact of transition to competitive bidding in the wind energy segment is being felt even after two years of its introduction. Capacity additions have slowed down so much so that India managed to add only about 1,480.97 MW of new wind capacity during 2018-19, against a potential to add 8 GW-10 GW per year. The situation seems to have improved this year, with 742.51 MW of new wind power capacity having been installed between April and June 2019. However, the country’s wind segment is lagging behind the 60 GW target set by the government for the year 2022, with only 36.37 GW installed in cumulative terms as of June 2019. Barring Gujarat, Tamil Nadu and Maharashtra, no other state has conducted wind power auctions, leading to drying up of project capacities. The drop in capacity addition has thrown off the existing business models of developers and manufacturers alike, and has increased the woes of wind turbine manufacturers and developers who are fighting for survival.

Tariffs in the wind power segment (which are much lower than feed-in tariffs) have reduced the double-digit returns for developers to sub-10 per cent levels. In addition, the threat of state utilities reneging on power purchase agreements (PPAs), after Andhra Pradesh and Karnataka backtracked on signed PPAs, has put a dampener on the entire market. Past and present tenders have already started facing headwinds due to transmission and land constraints with projects of thousands of megawatts remaining stranded. For instance, in July 2018, the Solar Energy Corporation of India’s (SECI) Tranche V tender offering 2 GW of wind power capacity was cancelled as it failed to garner sufficient bids primarily due to transmission issues. It was then retendered in August 2018 with a total capacity of 1,200 MW, and received a good response from developers. SECI’s Tranche VI tender (February 2019) for 1,200 MW also witnessed an enthusiastic response from developers. However, the trend seems to have reversed since then, as the recent Tranche VII tender for 1,200 MW was heavily undersubscribed due to land availability issues. Similarly, Gujarat Urja Vikas Nigam Limited annulled its 500 MW wind power tender in July 2018, for lack of adequate transmission infrastructure.

Competitive bidding has brought in a period of transition for the entire wind power segment, bringing many issues into focus. Going forward, enabling policies, along with a streamlined approach to tackle inadequate transmission capacity, are required to revive the segment.

Neglect of bioenergy and small hydro

As of June 2019, the country’s total installed bioenergy capacity stood at only 9.94 GW (including waste-to-energy capacity), compared to the total available potential of 25 GW. The bioenergy segment has long suffered from neglect due to greater competition and developer preference for solar and wind segments. This coupled with issues related to collecting, storing and transporting biomass and waste has kept developers and investors at bay.

Like bioenergy, the small-hydro segment too continues to lag behind with only 107.35 MW capacity being installed during 2018-19 against a targeted capacity of 250 MW. Roughly 11.65 MW of new capacity has been added between April and June 2019, taking the cumulative capacity to 4.6 GW as of June 2019. The segment has been suffering from policy inaction and lack of investments for quite some time. This, combined with the environmental challenges and lower returns, is making developers reluctant to foray into the segment. 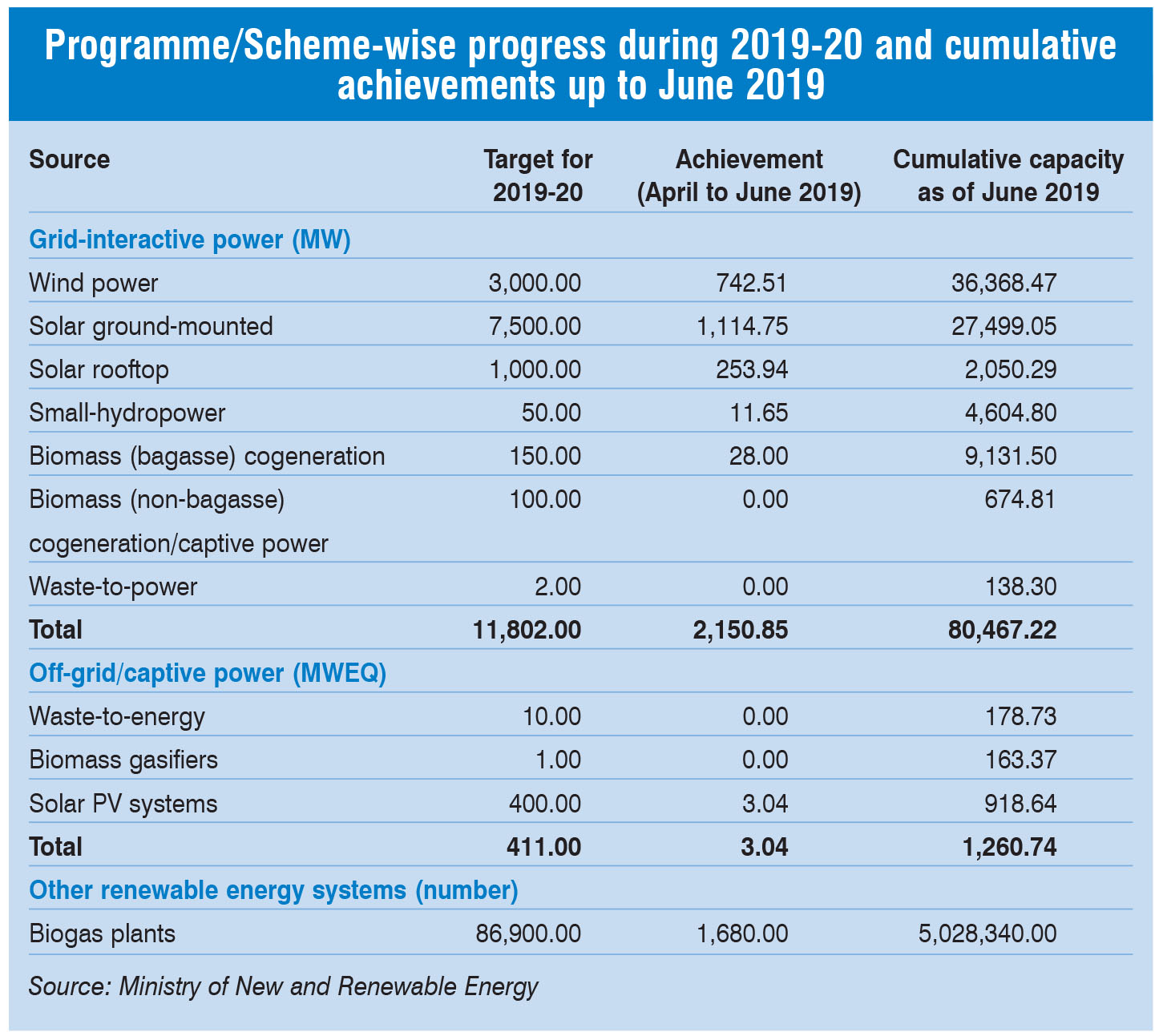 The highly competitive Indian renewable energy market is constantly evolving and creating space for new players offering services and products at competitive prices. Companies that are unable to sustain themselves in this neck-and-neck competition get acquired by bigger players with deeper pockets or diversify into other areas. Despite numerous challenges plaguing the sector, the future seems bright. The fact is that any policy or regulatory change is followed by a short period of uncertainty, after which things fall into place. In time, the renewable energy market too will adjust accordingly and provide improved visibility for stakeholders. Going forward, new areas of opportunity such as solar-wind hybrids and energy storage will help in better utilisation of resources and result in higher generation levels.