With nearly 75 per cent share in the total power generation during 2018-19, coal continues to be the dominant source of power generation in India. However, the segment currently faces multiple challenges, including financial stress due to faster capacity addition vis-à-vis the growth in power demand in the past several years, the lack of power purchase agreements (PPAs), uncertain fuel supply, and the imposition of stricter environmental norms. Further, coal-based power is increasingly being displaced by renewable energy given India’s commitments towards reducing pollution and greenhouse gas emissions, the rapid growth in renewable energy-based capacity and the decline in renewable energy tariffs.

Nonetheless, coal-based power still plays the key role of meeting the baseload power along with the added responsibility of maintaining grid balance, in view of the increasing share of intermittent renewables. Meanwhile, a number of steps have been planned by the government to reduce the stress on coal-based plants. These include the grant of linkage coal for short-term PPAs, an increase in the quantity of coal for special forward e-auction for the sector, and allowing existing coal linkages to be used in case of termination of PPAs due to payment default by discoms. Power Line takes a look at the trends in the coal-based power generation segment and its future outlook…

As of June 2019, the coal-based generation capacity stood at 200.75 GW, accounting for around 56.1 per cent of the country’s total installed capacity. Of this, the private sector accounts for the highest share of about 38 per cent (76.5 GW of capacity), followed by the state sector with 33 per cent (65.4 GW) and the central sector with the remaining capacity. Between 2013-14 and 2018-19, coal-based capacity has increased at a compound annual growth rate (CAGR) of 6.68 per cent, from 145 GW as of March 2014 to 200.7 GW as of March 2019. However, the annual capacity additions have been declining consistently. Some of the recently commissioned projects include NTPC Limited’s Gadarwara thermal power plant (TPP) Unit 1 (800 MW) and Solapur TPP Unit 2 (660 MW); Rajasthan Rajya Vidyut Utpadan Nigam Limited’s Chhabra TPP Units 5 and 6 (1,320 MW); and Madhya Pradesh Power Generation Company Limited’s Shree Singaji TPP Units 3 and 4 (1,320 MW). Among the key units commissioned by the private sector are the 360 MW unit of RKM Powergen’s Uchpinda TPP, the 600 MW unit of Essar Power’s Mahan TPP, and the 600 MW unit of KSK Mahanadi Power’s Akaltara TPP. During 2019-20, only 45 MW has been added (one unit of BLA Power Limited’s Niwari TPP). 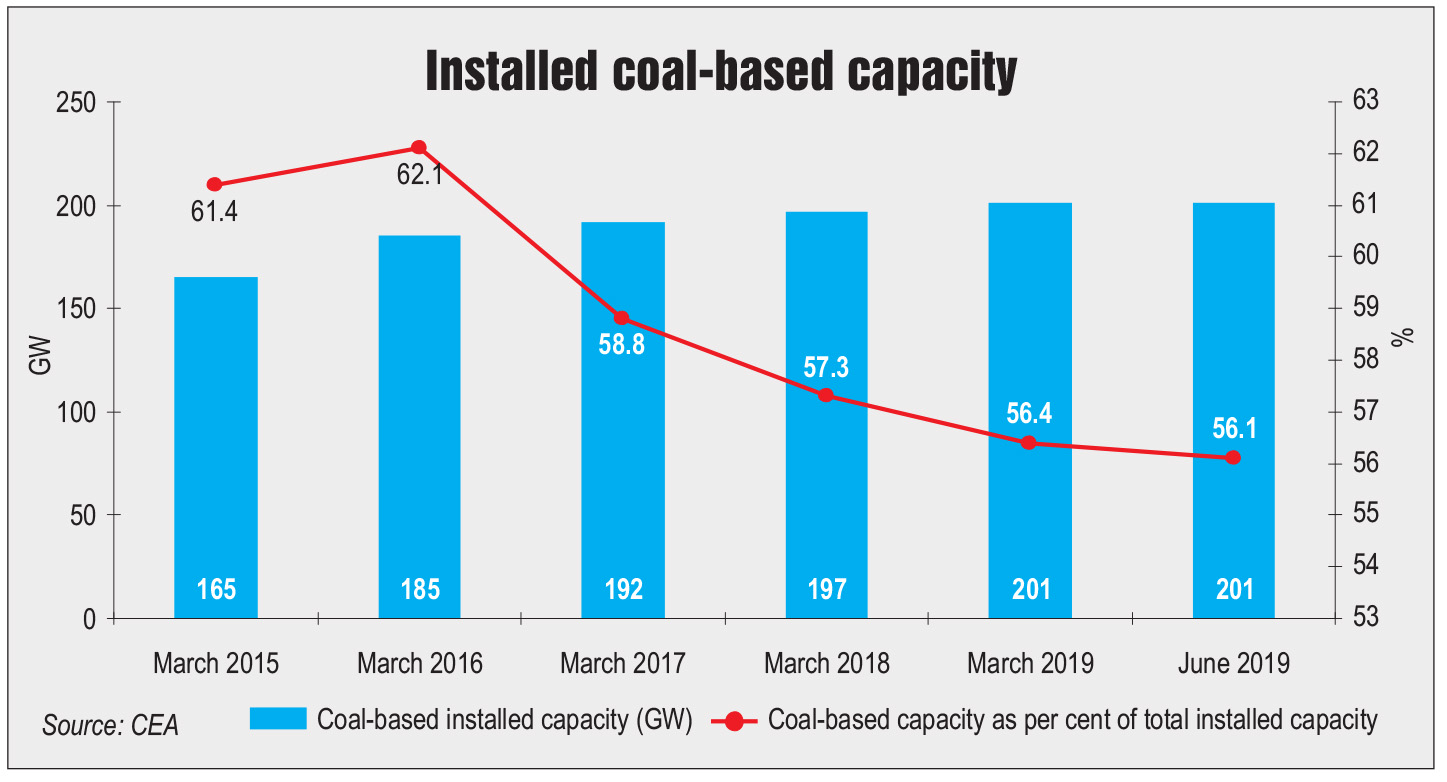 The improvement in PLFs can be attributed to various government programmes aimed at increasing demand and enhancing fuel supply, including the Ujwal Discom Assurance Yojana, the Scheme for Harnessing and Allocating Koyala (Coal) Transparently in India (SHAKTI) and the Pilot Scheme for Procurement of Aggregate Power. During the current year (as of June 2019), the all-India PLF has been around 62.94 per cent, slightly better than the 62.38 per cent PLF recorded during the same period in the previous year. 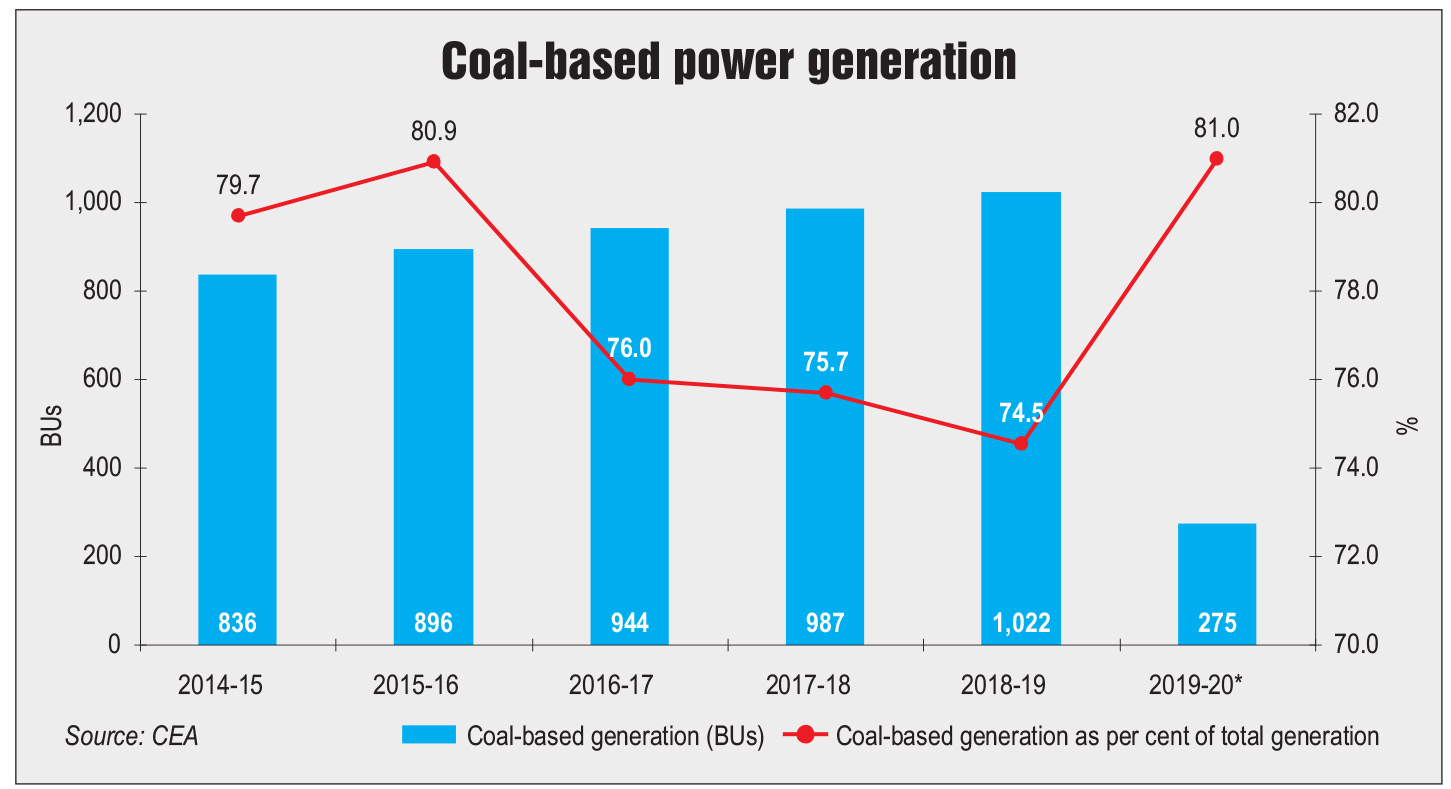 Fuel shortage is one of the key concerns facing the coal-based power generation segment and is causing stress in the sector. After the cancellation of 204 coal mines by the Supreme Court in 2014, many of the power projects were left stranded due to the absence of adequate fuel supply arrangements. And many others were set up without firm coal linkages from Coal India Limited (CIL) The demand for coal has been higher than the current level of supply of coal in India. During 2018-19, against a total demand of 969.46 million tonnes (mt), the domestic coal supply was estimated to be 734.23 mt. This is reflected in the coal stock position across power plants in the country which has been vulnerable over the past year.

As against a normative requirement of 22 days, power plants had coal stocks of 10-18 days. In October 2018, coal stocks declined to 6.2 days. As of July 2019, coal stocks stand at 15 days with two power plants with critical coal stocks. Another challenge being faced by coal power plants is the lack of PPA. Discoms have been observed to be reluctant to enter into new PPAs due to the uncertain demand and availability of alternative, cheaper power supply sources. Nearly 20 GW of the stressed capacity does not have PPAs tied up. In addition, there have been serious delays in the realisation of receivables from discoms which impairs the ability of project developers to service their debt in a timely manner and leads to the depletion of working capital. The outstanding dues of power producers pending with discoms stood at Rs 386.96 billion as of March 2019. Of this, Rs 221 billion was the overdue amount that was not cleared even after the 60 day grace period offered by generators.

Other challenges being faced by coal-based power generation plants include slow growth in power demand, the requirement to meet the new environmental norms, and delays in project execution. The installation of emission control technologies involves high costs and also entails additional operations and maintenance costs. While this issue has been addressed to a certain extent, with the cost being allowed as a pass-through in tariff, plant owners have been facing difficulties in arranging funds. With the growing influx of renewable energy, the demand for coal-based power has been declining. Moreover, coal-based plants are subjected to frequent ramp up and ramp down in order to balance renewable-based power, thereby making them less efficient and resulting in higher maintenance requirements.

The government has taken a number of steps in order to resolve the issue of stressed assets and improve the coal supply to power plants. It constituted a high-level empowered committee (HLEC) under the chairmanship of the cabinet secretary which submitted its report in November 2018. The government thereafter constituted a group of ministers (GoM) to examine the specific recommendations of the HLEC. Based on the observations of the GoM, it lined up several measures including the determination of annual contracted quantity (ACQ) based on plant efficiency and mandatory payment of late payment surcharge. To this end, the Central Electricity Authority  has issued norms for coal consumption in TPP which came into effect from April 1, 2019. As per the norms, the ACQ per MW entitlements for all TPPs, irrespective of their age or technical parameters, will be calculated based on normative station heat rate with an upper ceiling of 2,600 kCal per kWh. In another move to provide relief to coal power plants, the Ministry of Power introduced a pilot scheme in April 2018 for procuring electricity from power plants without PPAs. Under the scheme, the government planned to procure 2,500 MW of power through medium-term contracts. In October 2018, agreements were signed for 1,900 MW of capacity at about Rs 4.20 per unit. Another round of auction under the scheme was conducted in April 2019. With regard to improving the coal supply, new railway lines are being laid for the transportation of coal, and long-term coal linkages are being made available through auction under SHAKTI. Meanwhile, the MoP is working on a scheme to auction PPAs with attached coal supplies from CIL. The proposed auction of medium-term PPAs with coal supplies is expected to help about 10 GW of plants, that are stressed due to the lack of fuel and power supply contracts.

Going forward, the share of coal in the energy mix is expected to decline with the increase in renewables capacity. At the same time, coal-based plants are required for bringing in flexibility in operations and ensuring grid discipline. Nearly 65 GW of capacity was under execution as of April 2019 and is expected to be commissioned over the next two to three years. In the short term, the key focus areas for coal-based plants will be the installation of emission control technologies and enhancing the flexibility of operations.