Indian Railways (IR) had a modest beginning in 1853, when the first train steamed from Mumbai to Thane. In 1951, IR was nationalised as a single unit, becoming one of the largest railway networks in the world. Today, it is owned and operated by the Government of India and governed by the Ministry of Railways (MoR).

The Indian railway network, along with national highways and ports, is the backbone of India’s transport infrastructure. Currently, more than 35 per cent of the country’s total freight traffic (in tonne km) moves on rail. Further, the share of railways in core infrastructure sectors such as coal, power, steel and cement, as well as other critical sectors such as fertilisers, is as high as 70 per cent. The reach and access of its services is continuously expanding, with a steady improvement in its services by a dedicated team of 1.32 million and with the use of cutting-edge technologies.

Currently, 2,000 MW of electricity is required for traction purposes. With complete network electrification, this requirement is estimated to reach 3,000 MW. At present, the key sources of power for IR are Ratnagiri Gas and Private Power Limited, Bharatiya Rail Bijlee Company Limited (a joint venture [JV] between IR and NTPC Limited), and open bidding. As of December 2018, IR is drawing about 1,100 MW through open access in the states of Maharashtra, Madhya Pradesh, Gujarat, Rajasthan, Jharkhand, Haryana, Karnataka, Delhi and Uttar Pradesh. It also procures power from the Damodar Valley Corporation. 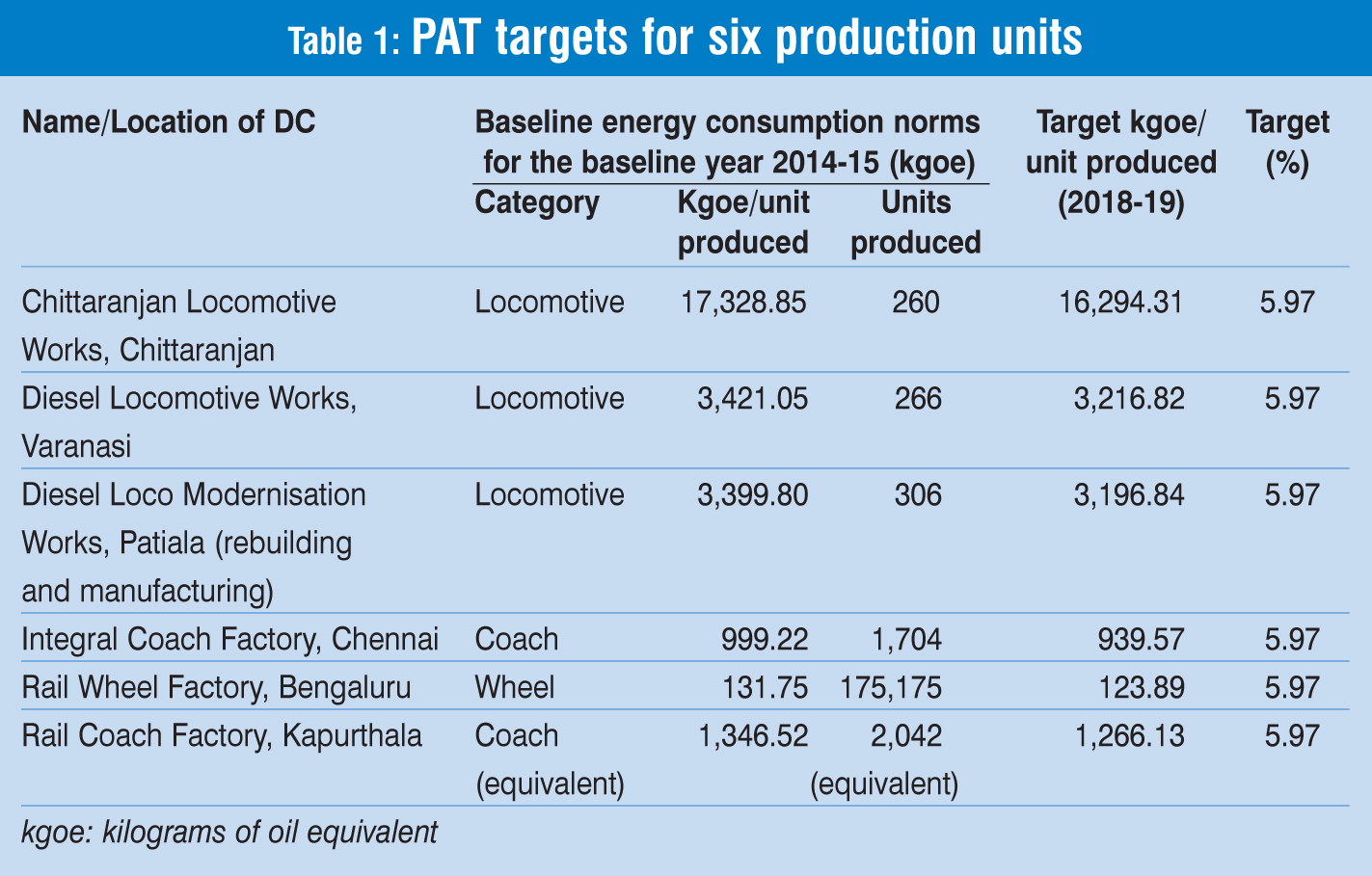 Varying demand: All the production units are designed for continuous operation. The batch operation of heavy machinery such as arc furnaces not only consumes more energy, but also reduces its life and efficiency. As the demand for the railway equipment like wheels, coaches and locomotives is not consistent, it affects the effectiveness of plant machinery.

Vintage of plants: Many public sector-owned power units are old with vintage technologies. The deployment of new technologies in these plants is very challenging, thus hindering the progress of energy efficiency activities.

Cost of energy efficiency: Any modification in the existing process at railway plants to ensure energy efficiency is capital intensive. Also, the industrial lending rates of banks are very high in India and thus the internal rate of return is also high. This makes projects less attractive. Moreover, there are no separate funds available for energy efficiency activities.

To reduce its energy costs and carbon footprint, IR has made 100 per cent network electrification a key priority under Mission 41k. Its plan is to electrify around 38,000 route km of its broad gauge rail network between 2017-18 and 2021-22. This will entail a total investment of $7 billion. The mission’s target is to achieve cost savings of Rs 410 billion in electric traction by 2025. IR’s cumulative savings in traction and non-traction electricity consumption stood at Rs 89.02 billion as of September 2018, which is 16 per cent more than the targeted savings of Rs 76.53 billion envisaged under the mission.

By 2020, IR aims to meet 10 per cent of its total power needs through renewable sources. To this end, it is planning to set up 1,000 MW of solar plants and 200 MW of wind power plants by 2020-21. Of this, 50.5 MW of solar and 36.5 MW of wind power capacity has already been made operational. As part of this, it plans to install solar panels on vacant railway lands along the tracks and other land parcels for generating power to meet its traction energy requirement. Besides this, IR has been taking steps to reduce pollution and manage waste through the use of biodiesel, and is setting up captive power plants, effluent treatment plants, bio-toilets, etc.

The MoR and RITES Limited have formed a 49:51 JV company, Railway Energy Management Company Limited (REMCL), for undertaking green energy projects (solar and wind), power trading activities, transmission lines and power evacuation planning, energy conservation initiatives, efficient coordination in power generation through captive power plants, energy audits, etc. REMCL is making good progress and has tendered 99 MW of solar power capacity and 45.5 MW of wind capacity. As of December 2018, IR’s total renewable portfolio stood at 130 MW. Further, all railway stations (more than 8,000) are 100 per cent LED-lit. IR has also been actively taking policy initiatives by issuing various guidelines/circulars on general power supply systems such as the use of LED lights, star-rated equipment, etc. The Bureau of Energy Efficiency and the Ministry of Power have identified IR as one of the designated consumers (DCs) under the Perform Achieve and Trade (PAT) scheme. IR has taken several steps towards enhancing energy efficiency. It has reduced its specific electricity consumption (SEC) by about 3 per cent in both traction and non-traction areas on a year-on-year basis up to 2017, as per the Shakti Sustainable Energy Foundation and the Confederation of Indian Industry-Godrej Green Business Centre.

The country’s first electric locomotive with a regenerative system developed by Bharat Heavy Electricals Limited (BHEL) was launched in February 2019. BHEL has developed the state-of-the-art regeneration system through in-house research and development efforts for the railway network’s fleet of conventional electric locomotives. Regenerative technology helps avoid the loss of heat energy when the brakes are applied and also feeds the energy back into the overhead power lines. In contrast, in a dynamic braking system, the energy generated during the application of brakes gets wasted in the form of heat. According to a tweet by the MoR, this regenerative braking system in conventional DC (direct current) locomotives has been developed for the first time in the history of worldwide traction. The project, being a Make in India initiative, will lead to cost savings of Rs 2.5 million per locomotive per year.

This feature has earlier been successfully incorporated in the WAG-9 and WAP-5 class of locomotives generating savings of up to 20 per cent, and on all new electrical multiple units (EMUs) with savings of 30 per cent. It also increases the life of wheels and improves the availability of locomotives for running trains, thereby making electric traction more economical (see Table 2). 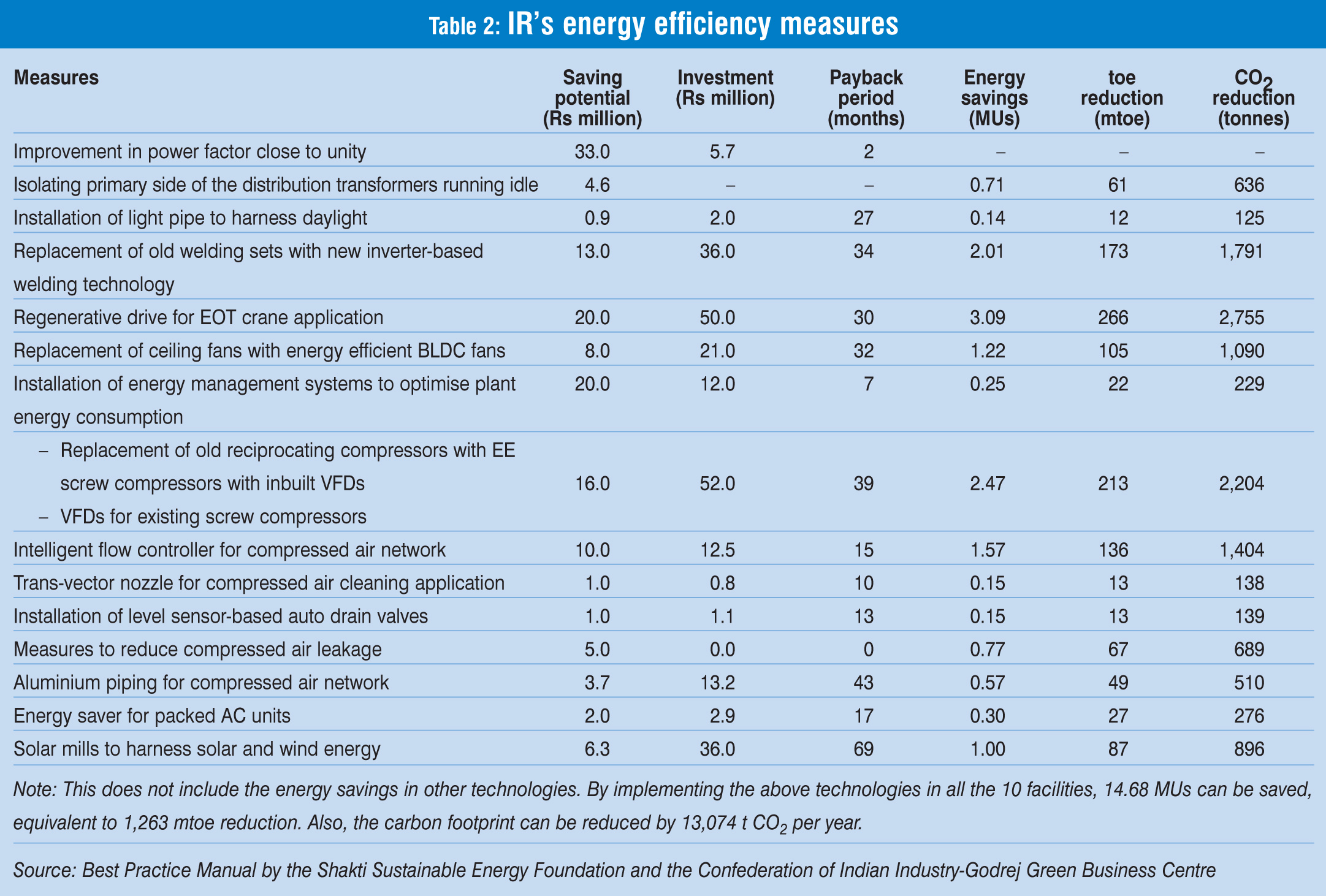 Some of the key initiatives taken on the traction side are:

IR’s electricity spending on non-traction applications is about Rs 17 billion per annum. The consumption of non-traction energy has largely been static, especially from 2008 till 2018-19, as a result of IR’s energy conservation efforts. This energy feeds the manufacturing workshops, maintenance depots, colonies, station areas and platforms. A key focus point has been the progressive deployment of LED-based lighting and energy efficient machines. To further enhance energy efficiency in the non-traction field, the following initiatives are being taken:

IR is a lead signatory to India’s Intended Nationally Determined Contributions. It has committed to reduce 20 per cent of fresh water consumption and 32 per cent of carbon emissions by 2030 over the base year 2005 by improving rail traction energy and fuel efficiency. Over the past five years, IR has been able to reduce SEC by about 18.9 per cent through various energy conservation initiatives, resulting in savings of about Rs 26.56 billion. Notably, IR has received 87 energy conservation awards in the past few years.

That said, there is still immense scope for further improvement in energy efficiency in the railway sector through the adoption of innovative energy efficiency technologies, solutions and international best practices.