In the past couple of years, the central government has undertaken a number of initiatives to augment coal production and enhance its availability across thermal power plants (TPPs) in the country. Although coal production has been growing, it has remained below demand leading to a year-on-year increase in coal imports. Furthermore, various TPPs continue to import coal due to better quality consideration. In order to tackle these issues, Coal India Limited (CIL) is now focusing on enhancing the efficiency of domestic coal production and the opening of new mines. It is looking at expanding coal production from higher capacity mega mines and improving the efficiency of coal output by using high capacity heavy earthmoving machinery.

Trends in coal demand and production

Between 2014-15 and 2018-19, the coal production from CIL and Singareni Collieries Company Limited (SCCL) grew at a compound annual growth rate (CAGR) of 5.5 per cent to reach 671 million tonnes (mt). During the first quarter of 2019-20 (that is, April-June 2019), CIL’s coal production stood at 154 mt (registering an increase of 2 per cent over the corresponding period of the previous year) while that of SCCL stood at 17 mt (marking an improvement of 17 per cent).

Reportedly, CIL’s output has been impacted by delays in awarding contracts for overburden removal as well as unforeseen sporadic protests, and law and order incidents, especially at one of its biggest subsidiaries, Mahanadi Coalfields Limited (MCL).

As per the Central Electricity Authority, in the first quarter of 2019-20 (April-June 2019), coal imports by TPPs recorded a significant increase. The total imported coal used by TPPs during April-June 2019 stood at 18.4 mt, marking an increase of around 40 per cent over the corresponding period of the previous year. One of the reasons cited for this is the softening of non-coking coal prices in the international markets which led to an increase in import volumes. Besides, the disruption in coal production at MCL impacted CIL’s aggregate coal output. 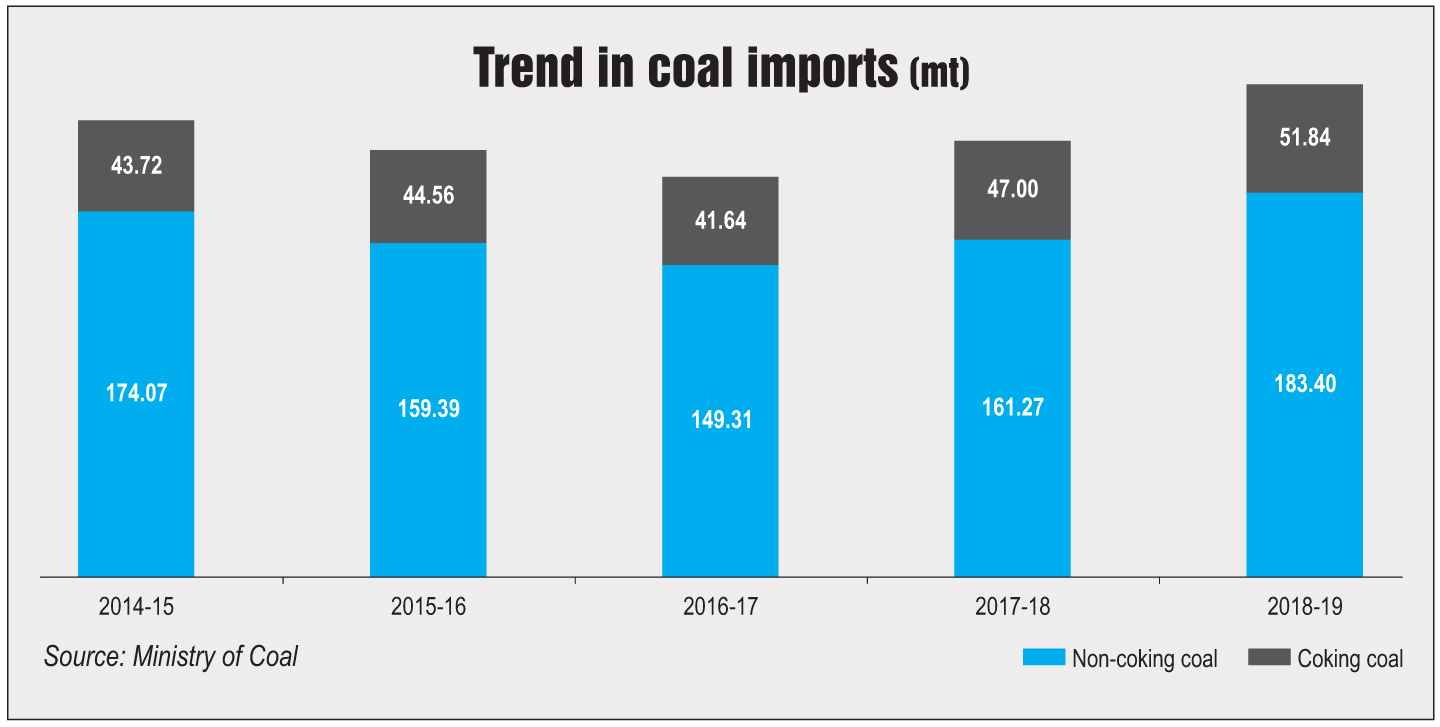 The Ministry of Power (MoP) has taken a number of steps for augmenting coal supply to power plants. These include introducing the “flexibility” component in the utilisation of domestic coal by gencos across their power generating stations, awarding coal linkages under the Scheme for Harnessing and Allocating Koyala (Coal) Transparently in India (SHAKTI), expediting clearance processes and providing assistance in land acquisition. The MoP, with support from the Ministry of Railways, has also been working on improving coal transportation. 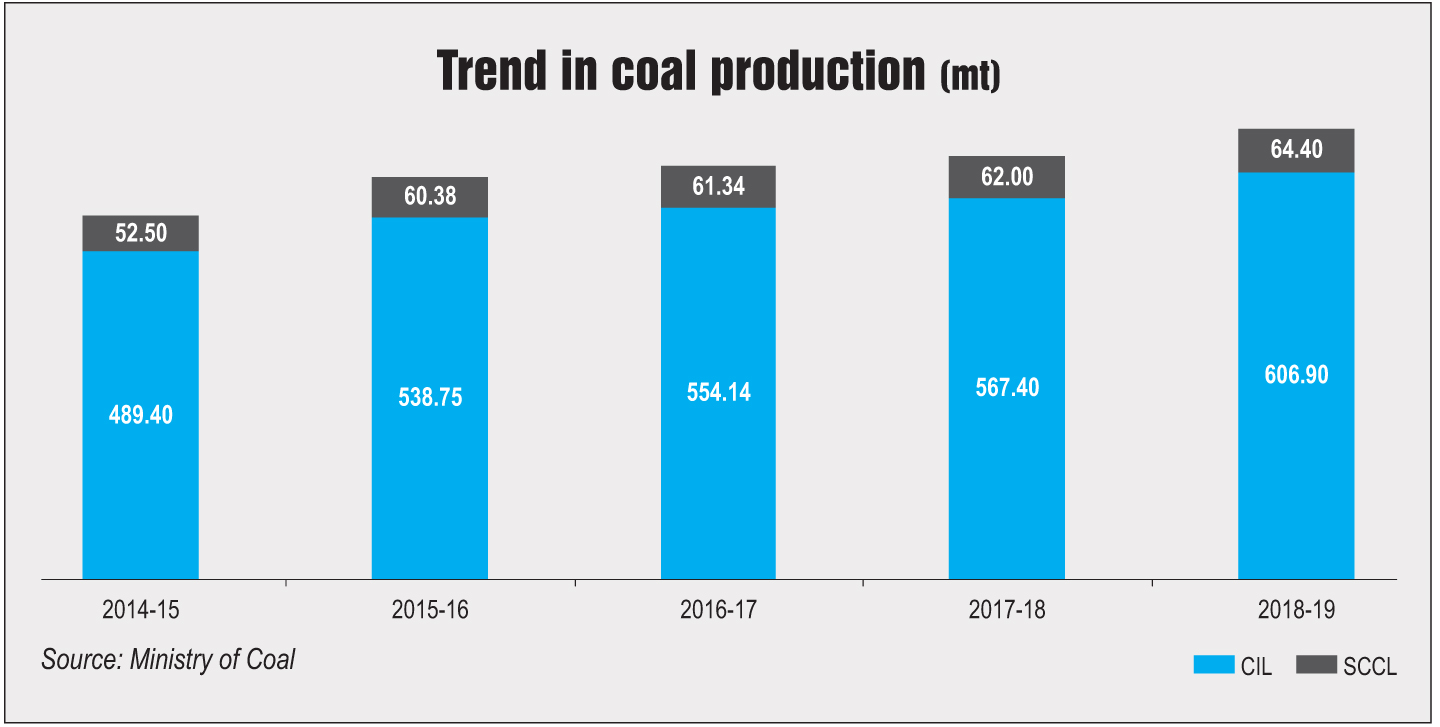 According to a recent study published by Brookings titled “Coal in India – Adjusting to Transition”, the rising renewable energy capacity and the broader changes in the Indian power system are likely to slow down the demand for coal; however, the demand for coal is not expected to reach its peak before 2030. The report projects around 4.6 per cent annual growth in coal-fired power generation through 2030. However, the growth in coal demand will be somewhat lower (3.6 to 3.8 per cent annually), as the growing share of supercritical coal power plants will improve the average fleet efficiency. Besides this, there is expected to be efficiency gains in industrial electricity consumption in the coming years.

To increase coal supply, CIL is undertaking continued efforts to achieve the coal production target of 940 mt by 2024-25, primarily by augmenting mining efficiency and developing new mines. The company is developing mega mines with capacity higher than 10 mt per annum. It has introduced high capacity heavy earthmoving machinery to improve the efficiency of coal output. It aims to adopt opencast coal production in a big way to improve operational efficiency.

At the same time, in order to maximise the use of indigenous coal, the government is undertaking various steps to promote import substitution such as offering more higher-grade coal through special forward e-auction for power consumers and supplying additional coal to power plants for meeting the shortfall within the annual contracted quantity. Apart from this, CIL plans to acquire minority stakes in operational coking coal mines across Russia, Canada and Australia. Another likely source of increase in coal output is the erstwhile deallocated coal blocks. After a hiatus of a couple of years, the production from 42 deallocated coal blocks is likely to reach pre-deallocation levels, with aggregate production of around 45 mt during 2019-20.

On the back of the expected increase in domestic production and a jump in renewable energy output, the Ministry of Coal is preparing a plan to cut down imports by at least a third over the next five years. Reportedly, the plan targets to reduce coal imports to below 150 mt by the year ending March 2024. However, despite the increase in domestic coal production, power stations that are designed to run on higher quality imported coal would continue to rely on imports.

To conclude, in the past couple of years, numerous efforts have been taken for augmenting coal production and improving the coal availability at TPPs. However, owing to unforeseen circumstances such as weather conditions, and law and order situations, the increase in coal output hasn’t been commensurate. Besides, legacy issues such as delays in land acquisition, and environmental and forest clearances continue to impede the opening of new mines. That said, the continued efforts and the high priority accorded to enhancing coal production and improving mining efficiency are likely to further improve the coal availability scenario in the coming years.