For India’s coal-fired power plants, which continue to have a majority share in installed capacity and power generation, lowering carbon emissions remains a priority. Over the years, supercritical technologies have become the preference for most new plants. In the past seven to eight years, a number of supercritical units have already been commissioned while others are in the pipeline by central, state and private gencos. The design efficiency of supercritical units is about 5 per cent higher than that of typical 500 MW subcritical units and these units have correspondingly lower fuel consumption and CO2 emissions in ambient air. Efforts are also on to develop advanced ultra-supercritical technology to achieve a 20 per cent reduction in CO2 emissions at source, combined with 20 per cent saving in coal consumption compared to subcritical plants. The use of this technology in all future large-scale coal-fired power plants will ensure energy security for the country as well as a cleaner environment. A look at the uptake of these technologies in the power generation segment and some recent developments in the space…

Ultra-supercritical plants operate at higher temperature and pressure (approximately 600 °C and 32 MPa), resulting in higher efficiency. These plants require less coal per kWh of electricity generated and release lower CO2 emissions. The efficiency of these plants is as high as 44 per cent. However, the extreme operating parameters impose stringent restrictions on materials. In July 2019, NTPC Limited and Bharat Heavy Electricals Limited (BHEL) signed an MoU to form a joint venture company for setting up an 800 MW advanced ultra-supercritical (AUSC) technology-based demonstration plant at NTPC’s existing power plant in Sipat, Chhattisgarh. Research on AUSC technology has been going on since 2010. The demonstration plant will have a main steam pressure of around 300 kg per cm2 and a temperature of 700 °C. It will provide targeted efficiency of 45-46 per cent as against the 38 per cent efficiency of subcritical units and 41-42 per cent of supercritical units. This will further reduce coal consumption and CO2 emissions by 11 per cent as compared to supercritical plants and by 20 per cent as compared to subcritical power plants. The project will be executed over a seven-year period from the date of financial sanction by the government. Two and a half years have been outlined for design and development work, and four and a half years for power project construction.

Considering the high efficiency and environmental considerations, another clean coal technology that has seen traction is fluidised bed combustion (FBC). FBC is a method of burning coal in a bed of heated particles suspended in a gas flow. At sufficient flow rates, the bed acts as a fluid for the rapid mixing of particles. Coal is added to the bed and the continuous mixing leads to complete combustion and a lower temperature than that of pressurised fuel combustion. The furnace combustion takes place at 840 ºC-950 ºC. The reduction in SO2 and NO2 emissions in the combustion chamber without the need for additional control equipment is one of the major advantages of furnace combustion. FBC boilers can burn fuel with a combustion efficiency of over 95 per cent, irrespective of the ash content. They can operate at an overall efficiency of 84 per cent (plus 2 per cent). In addition, they offer flexibility in terms of the quality of fuel. Even fuels like flotation slimes, washer rejects and agro waste can be burnt efficiently. There are two variants of FBC boilers – circulating fluidised bed combustion (CFBC) and pressurised fluidised bed combustion. CFBC is more reliable and economical. It has a high processing capacity because of  high gas velocity. Improved combustion efficiency is attained through the use of an FBC mechanism. Since the combustion reaction occurs in the entire furnace and there is a circulating circuit for the fluidised particles, the CFBC boiler has a long reaction time of combustion. For this reason, its adaptability to diverse fuels is high, and mixed combustion of multiple fuels is easy. Its inherent low emission design helps save the cost of installing and operating expensive DeNOx and DeSOx flue gas cleaning equipment. Also, the trouble spots are minimised and maintenance is simplified. Over the years, this technology has seen several advances in size, from smaller units in 100-250 MW range until the 1990s, to larger size units of 400 MW operating until 2010 and 600 MW unit sizes in operation today. 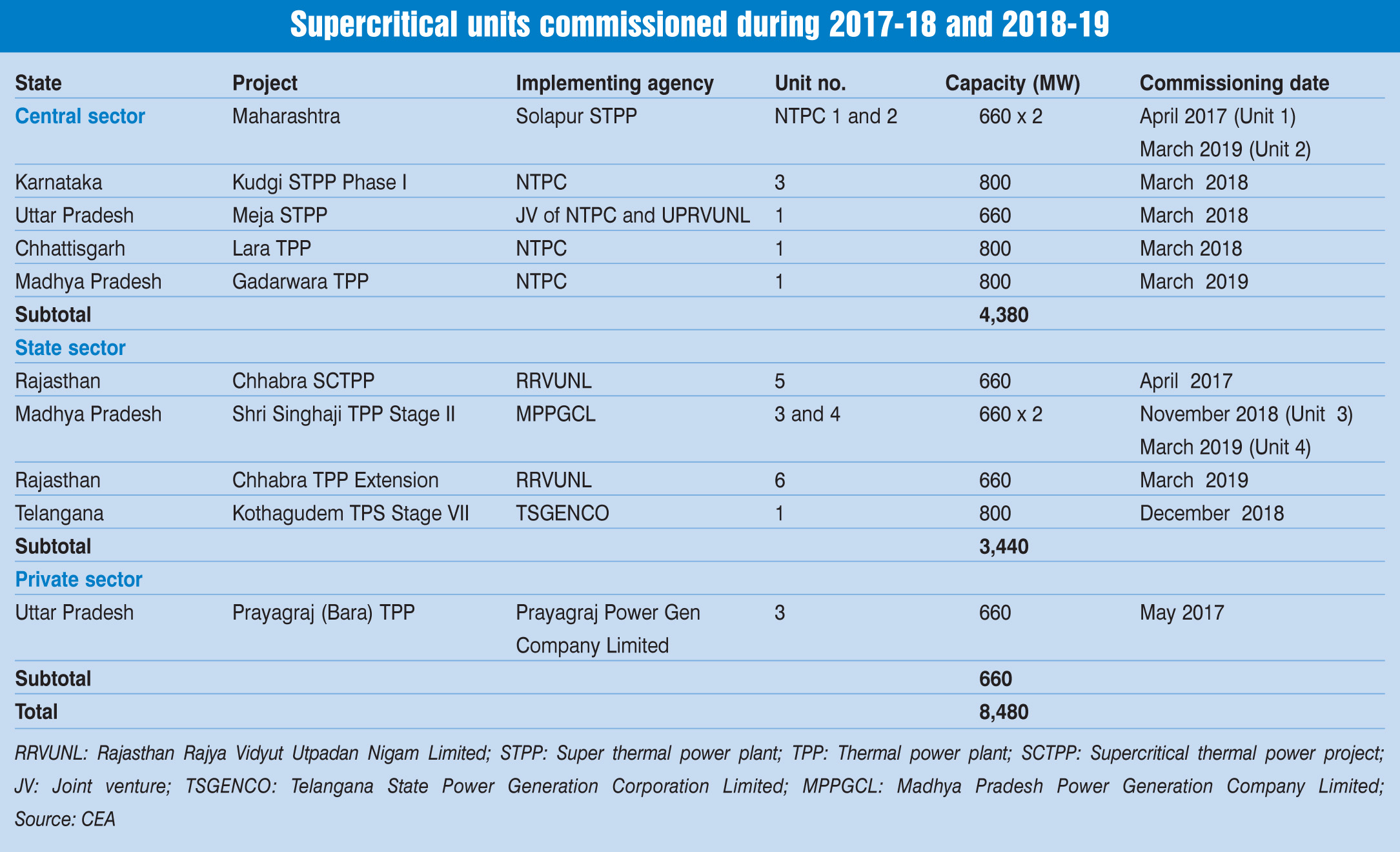 The Intergovernmental Panel on Climate Change (IPCC) has highlighted that achieving the ambitions of the Paris Agreement to limit future temperature increases to 1.5 degrees will require more than just an acceleration of efforts to reduce emissions. It might require the deployment of technologies to actually remove carbon from the atmosphere. Carbon capture, utilisation and storage, or CCUS, is an important emissions reduction technology that can be applied in the industrial sector as well as in power generation. CCUS encompasses methods and technologies to capture carbon dioxide (CO2) from fuel combustion or industrial processes. It involves  the transport of CO2 via a ship or a pipeline and its use either as a resource to create valuable products/services or its permanent storage deep underground in geological formations. CCUS technologies also provide the foundation for carbon removal or negative emissions when the CO2 is released from bio-based processes or directly from the atmosphere. As a climate change mitigation strategy, CCS is best suited for facilities with large CO2 emissions. Since most of the power plants are coal based, they are the principal targets as they account for roughly 80 per cent of global CO2 emissions. To date, however, CO2 capture has not been applied on a commercial scale, although designs of such technologies have been widely studied and proposed. In some cases, small pilot-scale projects have been launched as a first step towards commercialsing CCS technology.

The drive to improve the efficiency of coal-fired units through new technologies has gained momentum with policy efforts. The recently announced five-year vision document of the power ministry, called Vision 2024, lays emphasis on modernising generation through the development of advanced ultra-supercritical technologies.

Net, net, it is well recognised that India needs to reduce its emissions intensity as part of its Paris climate targets. For this, efforts at the technological and industrial levels to enhance the efficiency of India’s polluting coal-based power stations will be critical.