In 2018-19, around 100.84 BUs of electricity was traded by trading licensees through bilateral transactions and power exchanges, an increase of 16 per cent over the previous year. In addition, a strong compound annual growth rate (CAGR) of around 12 per cent was recorded during the period 2014-15 to 2018-19. In monetary terms, the size of the short-term power market stood at Rs 430.64 billion, a significant increase of around 42 per cent over the previous year. Power Line takes a look at the key trends in the trading segment during the past year…

Player wise, the majority (50.06 BUs) of the total day-ahead volumes was traded on the country’s first and largest exchange, the Indian Energy Exchange (IEX). The IEX’s trading volumes in the DAM market have grown at a CAGR of over 16 per cent since 2014-15. Meanwhile, 0.09 BUs in the DAM were traded on Power Exchange India Limited (PXIL). The major buyers in the DAM at the IEX were Gujarat Urja Vikas Nigam Limited, Bihar State Power Holding Company Limited, Southern Power Distribution Company of Telangana Limited, Maharashtra State Electricity Distribution Company Limited and West Bengal State Electricity Distribution Company Limited. At PXIL, the biggest buyers were Gujarat Urja Vikas Nigam Limited and the Himachal Pradesh State Electricity Board.

There were 37 registered interstate trading licensees, of which 25 were actively engaged in trading during 2018-19. PTC India was the market leader, with a 37.39 per cent share in the total volumes transacted through traders. Other top traders were Arunachal Pradesh Power Corporation Private Limited (10.63 per cent), Manikaran Power Limited (10.19 per cent), Kreate Energy Limited (9.93 per cent) and NTPC Vidyut Vyapar Nigam Limited (8.15 per cent share).

In 2018-19, the weighted average price of electricity transacted through traders was Rs 4.28 per unit, compared to Rs 3.59 per kWh in 2017-18. Around 15.5 per cent of the volumes transacted during the year were priced at less than Rs 4 per unit. The major buyers of power through traders during 2018-19 were the discoms of Uttar Pradesh, Nepal, Telangana, Gujarat and Uttarakhand.

Apart from discoms, a growing number of industrial consumers have turned to power exchanges owing to competitive prices. In 2018-19, over 4,950 open access consumers procured power through the two exchanges, as compared to around 4,807 consumers in 2017-18.

Meanwhile, around 21 MUs of power was procured by 588 open access consumers at PXIL during 2018-19 at a price of Rs 3.27 per unit, as against the weighted average price of Rs 4.29 per unit for the electricity transacted at the exchange. These transactions accounted for 24 per cent of PXIL’s total volumes transacted. 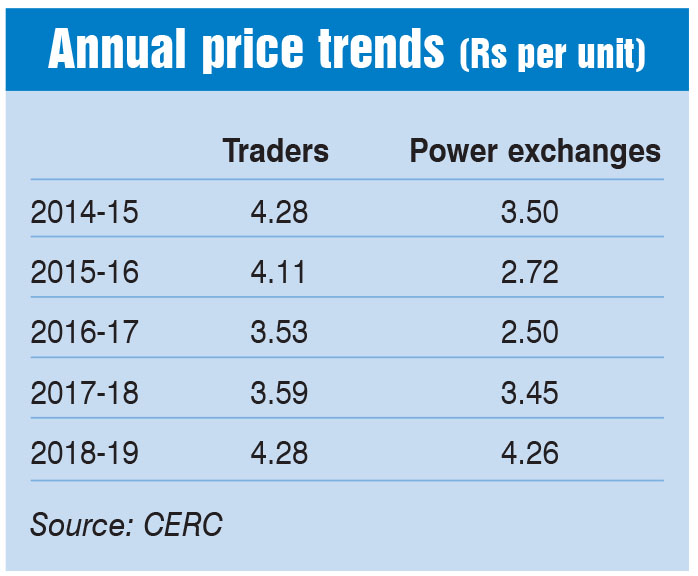 During 2018-19, 12.6 million renewable energy certificates (RECs) were transacted on the two power exchanges, a 22 per cent decrease over the previous year. There were around 988 buyers and 830 sellers.

The trading of solar RECs resumed after a gap of one year in the month of April 2018 (after the APTEL judgement). As the majority of the RECs expired/were likely to expire soon, the Central Electricity Regulatory Commission (CERC) extended the validity of the RECs up to March 2018. These developments resulted in a significant increase in the market clearing volume of solar RECs on both the power exchanges, from 0.208 million in 2017-18 to 7.195 million in 2018-19 at a weighted average price of Rs 1,097 per MWh. 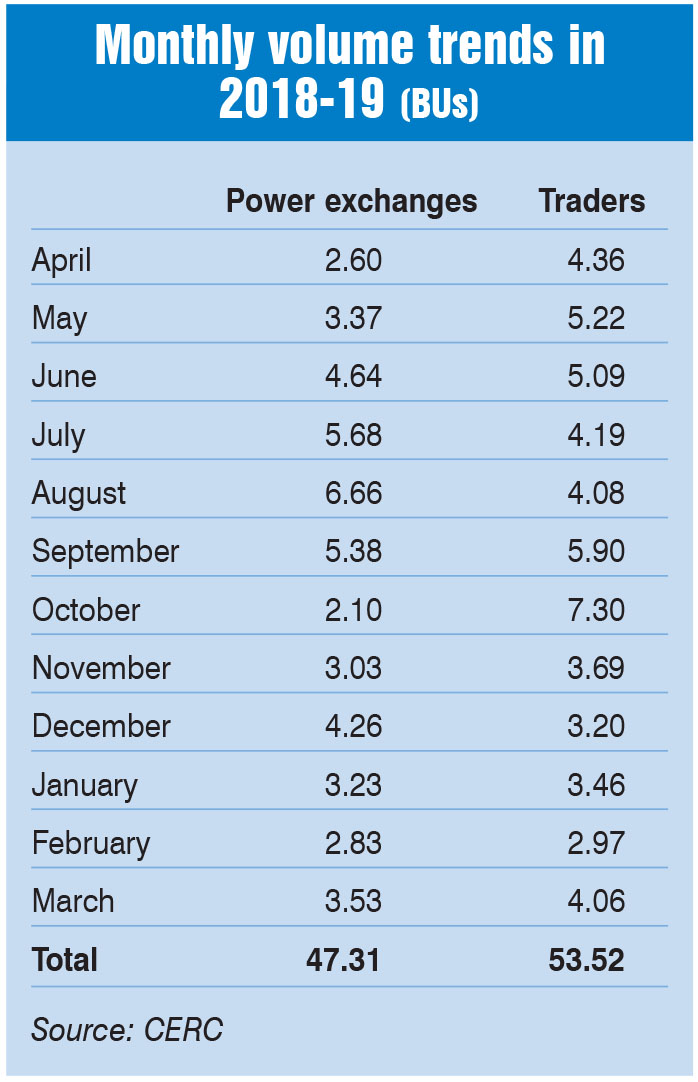 Over the past year, some of the key developments in the short-term power market have been the proposal to set up a new power exchange floated by the Bombay Stock Exchange, PTC India Limited and ICICI Bank Limited. The proposal is reportedly at an advanced stage and awaiting the CERC’s approval. While the company has already been formed, discussions are on to bring in exchange partners from across the industry including generators, distribution companies and financiers.

Also, the CERC issued a discussion paper in December 2018 on market-based economic despatch (MBED) of electricity for scheduling the country’s generation and power demand through the power exchanges. The model would function on a day-ahead time horizon and schedule and despatch all generation purely on economic principles, subject to technical constraints. The objective of the MBED will be to meet the system load by despatching the least-cost generation mix while ensuring that grid security is maintained. This is expected to bring about a paradigm shift in the way demand is met and supply despatched, while reducing overall system costs. According to industry experts, this can also address the stressed asset issue to an extent as plants with lower tariffs can despatch power even without a formal PPA.

In sum, these developments augur well for the growth of the short-term power market, and are expected to make it more vibrant besides encouraging competition in the next few years.