The distribution segment has reported mixed performance over the past year with near 100 per cent electrification under Saubhagya and a decline in operational and financial losses under the Ujwal Discom Assurance Yojana (UDAY) being the high points. That said, there are still some gaps as a few states have recently reported certain unelectrified pockets while discom losses continue to remain high, affecting the viability of the entire power value chain.

Further, to bring about reform in the segment, the Ministry of Power (MoP) has recently mandated discoms to open and maintain a letter of credit (LC) as a payment security mechanism for gencos. Other strong measures are also expected to be introduced soon. These include the separation of carriage and content, direct benefit transfer of subsidies, and tariff rationalisation.

As per India Infrastructure Research estimates, the aggregate distribution line length and transformer capacity stood at about 10.9 million ckt. km and over 780,000 MVA, respectively, as of March 2018. Meanwhile, the consumer base is estimated to be over 260 million. As per the Energy Statistics 2019 published by the Ministry of Statistics and Programme Implementation, the total energy sales in the country stood at about 1,130 BUs in 2017-18, as against 1,061 BUs in 2016-17, recording an increase of 6.5 per cent.

Under UDAY, the state governments were required to take over 75 per cent of the discoms’ debt and issue bonds to the lenders. The remaining debt was to be restructured or paid back through bonds issued by the discoms. Before the launch of UDAY (on September 30, 2015), the state discoms had an outstanding debt of approximately Rs 3.95 trillion. Of this, 16 states that signed comprehensive MoUs with the central government had a cumulative debt of Rs 3.24 trillion. As per the MoP, the states have issued bonds corresponding to Rs 2.09 trillion, of which Rs 1.24 trillion worth of bonds have been converted into grants or equities.

The book losses of discoms also witnessed a significant reduction of 70 per cent under UDAY, declining from Rs 514.8 billion in 2015-16 to Rs 150.5 billion in 2017-18. States/union territories (UTs) including Andhra Pradesh, Chhattisgarh, Goa, Gujarat, Haryana, Himachal Pradesh, Maharashtra, Rajasthan and Daman & Diu reported profits during 2017-18. Uttar Pradesh, Tamil Nadu, Punjab, Karnataka, Madhya Pradesh, Tripura and Manipur also reduced their book losses in 2017-18 by over 50 per cent in comparison to 2015-16.

In terms of aggregate technical and commercial (AT&C) losses, the UDAY states have reported a decline in their loss levels from 20.8 per cent in 2015-16 (base year) to 18.29 per cent in 2018-19 as against the target of 15 per cent by March 2019. Only 11 out of 28 states/union territories had AT&C losses less than 15 per cent in 2018-19. These were Andhra Pradesh, Dadra & Nagar Haveli, Himachal Pradesh, Gujarat, Daman & Diu, Karnataka, Kerala, Punjab, Tamil Nadu, Telangana and Uttarakhand. States including Jammu & Kashmir,

Meghalaya, Goa, Bihar and Uttar Pradesh recorded high AT&C losses between 25 per cent and 50 per cent in 2018-19. As per the latest data on the UDAY portal, AT&C losses stood at 20.44 per cent as of September 2019 (based on unaudited/ provisional data submitted by 14 states on the portal). 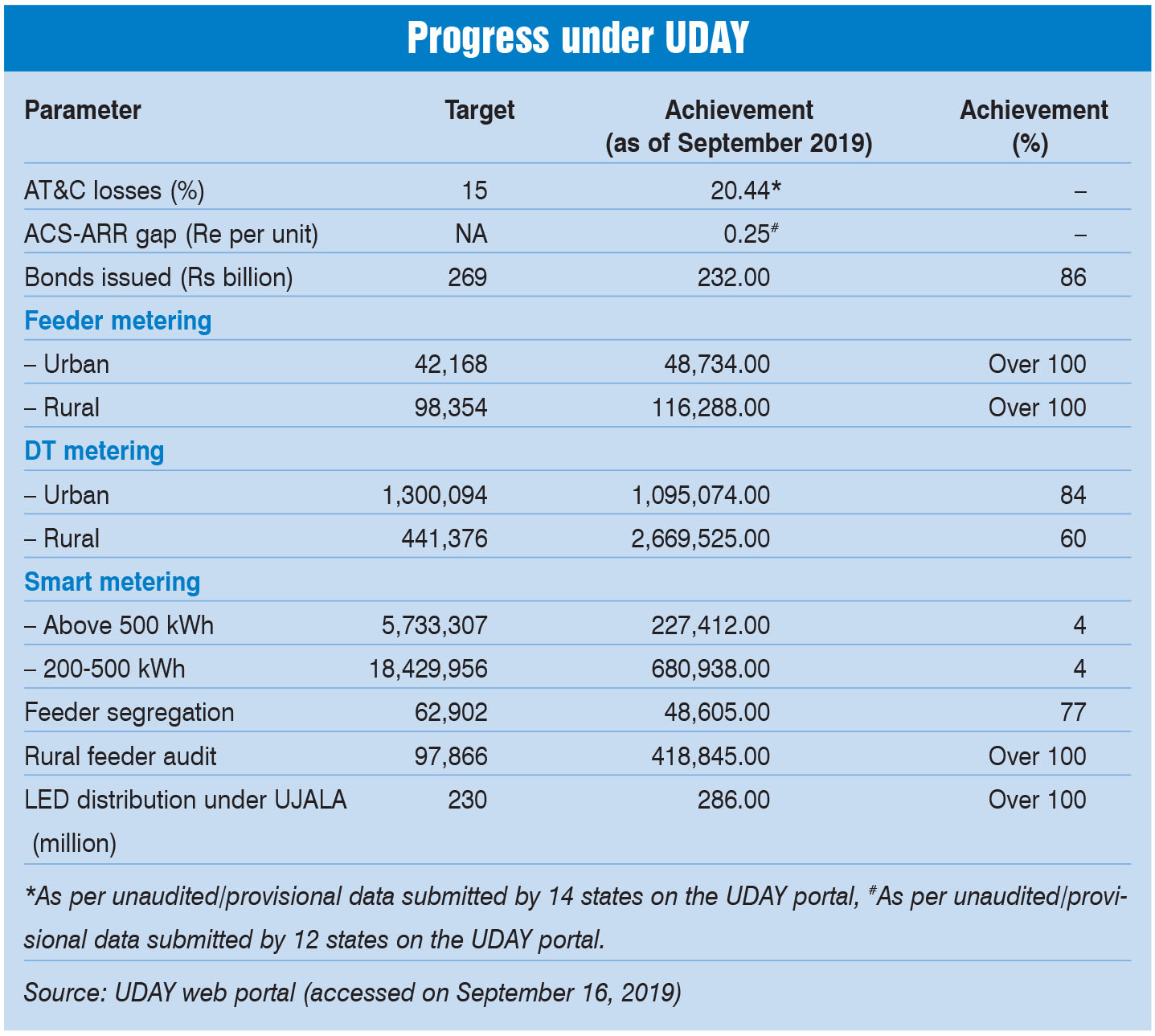 The Integrated Power Development Scheme (IPDS), which aims to provide quality and reliable 24×7 power in urban areas, has sanctioned projects aggregating Rs 320 billion for system strengthening (88.15 per cent of the total cost), IT implementation (3 per cent), enterprise resource planning (2.5 per cent), smart metering (2.65 per cent), distribution automation system (0.65 per cent), and gas-insulated switchgear (GIS) substations (3.05 per cent). A government grant of Rs 201 billion has been approved for these projects, of which over 51 per cent has been disbursed as of end August 2019. With respect to feeder monitoring, of the 36,172 targeted feeders, around 32,091 (88.7 per cent) are being monitored on the national power portal. For registering consumer complaints, 49 public discoms and 11 private discoms have made the short code “1912” operational. Further, under the erstwhile Restructured Accelerated Power Development and Reforms Programme (now subsumed under the IPDS), go-live status has been achieved in 1,389 of the total 1,405 towns targeted under the programme. Further, a SCADA system has been deployed in 57 of the 59 towns and system strengthening Part B has been completed in 1,195 towns. 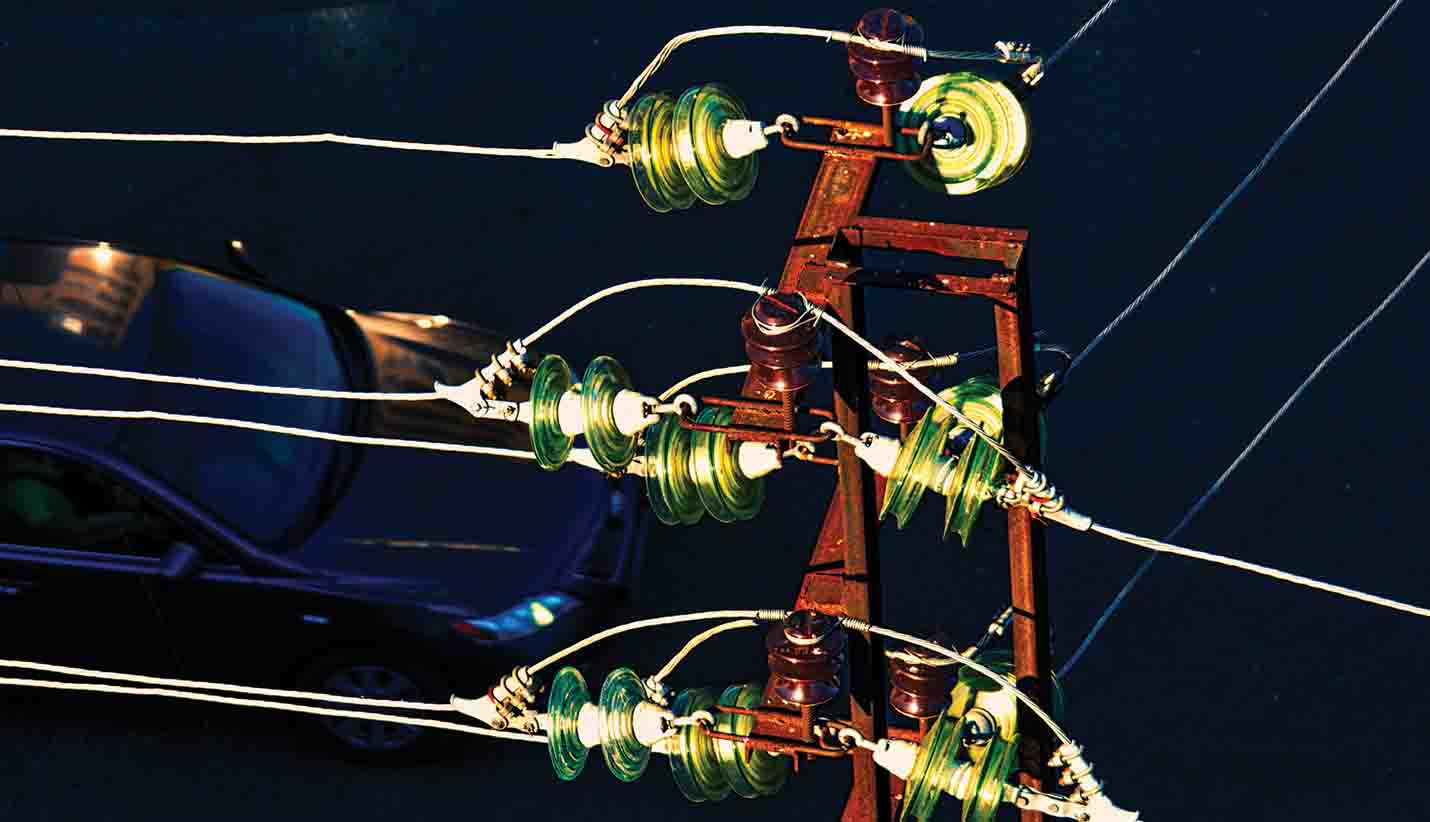 Recently, in July 2019, the MoP issued an order directing discoms to offer an LC as a payment security mechanism in power purchase agreements (PPAs). Accordingly, the National Load Despatch Centre and the regional load despatch centres have been directed by the MoP to “dispatch power only after it is intimated by the generating company and the distribution companies that LC for the desired quantum of power has been opened and copies made available to the concerned generating company”. Discoms do not need the LC for state generation companies as per a clarification issued by the ministry later. The provision came into effect from the billing cycle beginning August 1, 2019.

The MoP has issued an advisory to all discoms to draw up a roadmap for switching to smart meters in prepaid mode over a period of three years. Energy Efficiency Services Limited (EESL) has made significant progress in smart metering in collaboration with state discoms. EESL has completed the installation of over 500,000 smart meters in Uttar Pradesh, Delhi, Haryana, Bihar and Andhra Pradesh, under the Smart Meter National Programme. Further, in June 2019, Power Grid Corporation of India Limited and NTPC Limited came together to form a joint venture, the National Electricity Distribution Company (NEDC), for undertaking distribution operations. The JV has been set up on a 50:50 equity participation basis. The main aim of the NEDC is to undertake electricity distribution and related activities in states and UTs. Further developments have taken place on the distribution franchise (DF) front with Maharashtra awarding two DF contracts – one to Torrent Power for the Mumbra-Shil-Kalwa region and the other to CESC Limited for the Malegaon region. In August 2019, Essel Utilities reportedly wrote to MSEDCL to take over the franchisee operation of Spanco Nagpur Discom Limited. Owing to financial constraints, the company is unable to undertake investment in network expansion, and arrange funds for the operations and maintenance, and payment of salaries to employees.

While the discoms achieved short-term liquidity under UDAY, their financial woes are resurfacing. As a result, issues such as delays in payment to generators and renegotiation of PPAs have emerged. While concerns regarding current/future payment are likely to be addressed by the LC mechanism, there is no clarity on the resolution of historical dues. Further, recent measures by the Andhra Pradesh government to renegotiate the existing PPAs have made investors wary. In addition, the issues of inadequate tariff revision, increase in regulatory assets and delay in the disbursal of subsidies by the state governments remain to be addressed.

The government has taken cognisance of all these issues and is working on a reform package for the distribution segment. In this context, key amendments to the Tariff Policy, 2016 and the Electricity Act, 2003 are proposed to enable provisions like direct benefit transfer of subsidies, separation of the wires and supply business in distribution, stringent lending norms for discoms, and penalties for load-shedding. For now, the industry awaits their implementation.