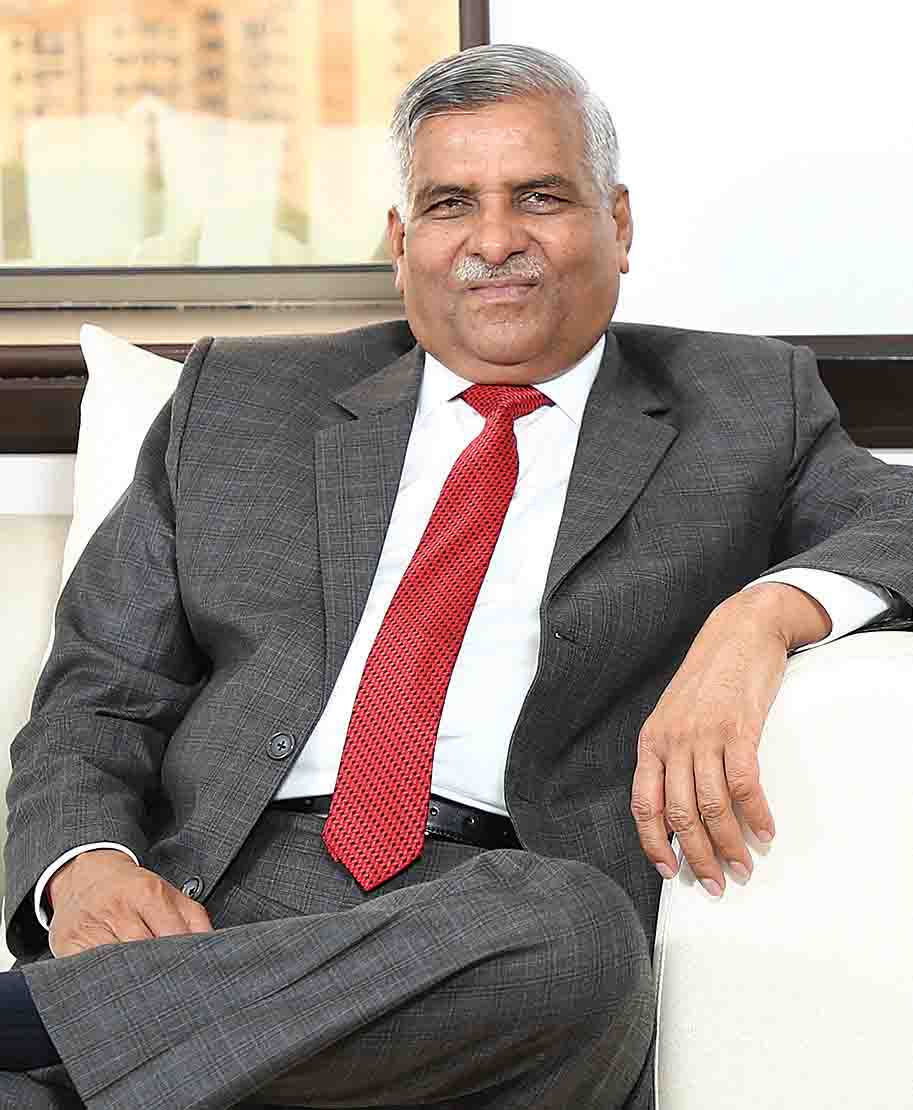 The year 2018-19 was a landmark year for Power Finance Corporation Limited (PFC), the power sector’s leading non-banking finance company (NBFC). PFC acquired the central government’s 52.63 per cent equity stake in REC Limited (formerly Rural Electrification Corporation Limited) for a total consideration of Rs 145 billion. With this deal, PFC is now both the promoter and holding company of REC. This acquisition is significant towards the power sector consolidation and would enable increased efficiencies in lending to the sector. PFC is going strong on the operations front too with record sanctions and disbursements over the past three years. Further, it has taken noteworthy initiatives for the resolution of stressed assets as well as increased funding to renewable energy projects in recent times. In an interview with Power Line, Rajeev Sharma, chairman and managing director, PFC, speaks about the power sector’s progress, the company’s achievements, and the way forward…

The power sector has seen tremendous growth over the past two decades. On the generation front, we have almost doubled our installed capacity in the last ten years. On the transmission front, the transmission line length has almost doubled and the substation capacity has almost tripled during the same period. Power can now be transmitted seamlessly from one corner to another through our national grid. Power deficit has been reduced to almost zero and the power demand has been growing steadily. Further, with the government schemes like Saubhagya, Deendayal Upadhyaya Gram Jyoti Yojana and the Integrated Power Development Scheme coming into effect, we expect the power demand to grow at a much faster rate.

Although there are concerns regarding stressed projects, lenders are adopting various methods to resolve the issues and make these assets viable on a sustainable basis. Also, the government has launched various schemes like SHAKTI to provide coal to the stressed power projects, which do not have fuel supply agreements in place, and pilot schemes for providing medium-term power purchase agreements (PPAs) for projects without PPAs. These initiatives will help the sector alleviate stress to a great extent. Also, the power ministry has introduced some proactive measures to address the stakeholders’ concerns like the requirement of letter of credit (LC) for power offtake in line with the PPAs, timely disposition of “change in law” petitions and the settlement of performance bank guarantees in a timely manner.

What are your views on the revised RBI circular on stressed assets? Does it offer a more practical solution to the power sector’s problems?

PFC is an NBFC and the earlier circular dated February 12, 2018 was not applicable directly to us. However, since we were lending to projects in consortium with banks, we were following the circular to a great extent.

The provision of the new circular that decisions by lenders representing 75 per cent by value of the total outstanding credit facilities and 60 per cent of lenders by number shall be binding upon all lenders and that the dissenting lenders will get liquidation value is an important change from the earlier circular, keeping in view that there is a large number of lenders in the consortium and it is generally difficult to have unanimous decisions.

However, I feel that the most important thing that the new circular has done away with is the mandatory requirement of going to the National Company Law Tribunal (NCLT) in case of default.

Power utilities are already under financial stress and if payment delays by discoms to independent power producers (IPPs) lead the lenders to approach NCLT for resolution for no fault of IPP, then it is too stringent. The new circular gives the option to lenders whether to approach NCLT or not and stipulates only additional provisioning for not approaching NCLT for resolution.

Thus, I believe that the new circular is definitely a more practical solution for the resolution of stressed assets.

What is PFC’s assessment of the state discoms’ performance under the UDAY scheme in the past one year? What are the major concern areas and the way forward to address them?

The Ujwal Discom Assurance Yojana (UDAY) states have reduced book losses from Rs 514.8 billion in 2015-16 to Rs 150.49 billion in 2017-18. This net reduction in losses was due to various factors including improvement in the billing efficiency, tariff hike, increase in energy consumption and controlled rise in power purchase cost. States like Andhra Pradesh, Chhattisgarh, Haryana, Maharashtra and Rajasthan have shown profits during 2017-18, and Uttar Pradesh, Tamil Nadu, Punjab, Karnataka and Madhya Pradesh have also reduced their 2017-18 book losses by over 50 per cent in comparison to 2015-16. Discoms have saved over Rs 340 billion due to UDAY and the gap between the average cost of supply and the average revenue realised has also now come down to 25 paise per unit. Therefore, I believe that discoms are in a better financial position due to UDAY.

We have two major concern areas. First is the issue of high outstanding dues from government departments, which can be addressed by states through sufficient provisions and the regular payment to discoms. Second major concern is the inconsistent tariff hike by the states, which can be rectified by filing petitions, which are more reflective of the costs incurred by these companies.

What is the current investor sentiment in the financing of green energy projects? What has been PFC’s experience in this segment so far?

Renewables rank very high on the government’s priority and many initiatives have been taken to promote renewable energy and meet the target of 175 GW by March 2022. The renewable energy projects continue to be an attractive option for investors.

Renewable energy is one of the important areas for PFC and we have taken several initiatives over the years to increase our financing in this segment. In the past two financial years, PFC has sanctioned more than Rs 160 billion and disbursed about Rs 120 billion to renewable projects.

What have been PFC’s major highlights in the past six to eight months?

On the operations front, PFC has recently raised $1 billion under its medium-term notes programme. This was the first dual and the largest US dollar bonds transaction for the government-owned Indian NBFC. We were extremely happy with the response of the investors on the issuance. We saw a strong and diversified final order book of over ~ $5 billion indicating the investors’ confidence after the acquisition of REC Limited. We have also raised $300 million through a syndicated loan. Recently, we have raised $750 million at very competitive interest rates. In aggregate, we have raised over $2 billion in the current financial year itself. PFC’s foreign currency portfolio is now about 15 per cent of the total borrowing against 5 per cent two to three years back. Our collections under the 54EC Capital Gain Tax bonds have increased significantly in this financial year, and going forward, we expect them to increase further.

What have been the sanctions and disbursement trends during the past years? What is PFC’s current borrower mix?

What is the current status of stressed assets resolution by PFC?

PFC is exploring various options for stressed assets resolution both under NCLT and outside NCLT, and also recovery through the Debt Recovery Tribunal and SARFAESI (Securitisation and Reconstruction of Financial Assets and Enforcement of Securities Interest Act, 2002).

I am glad to share that we have recently resolved the GMR Chhattisgarh (2×685 MW) project. Resolution of such big assets gives a lot of confidence to investors and other stakeholders. We are at an advanced stage of negotiations with developers for the resolution of some projects and in some of these projects we expect 100 per cent principal recovery.

Some of our stressed projects have benefited from government schemes like SHAKTI and the pilot scheme PPA for stressed assets. These schemes will help alleviate stress to a great extent. However, some of these commissioned projects are facing issues with respect to the tie-up of working capital, which is required for the procurement of coal, spares, etc. PFC has, in exceptional cases, sanctioned short-term loan to support these projects, where banks have not been forthcoming with sanctioning working capital loans.

Going forward, we expect that many of these stressed projects will be resolved. We also believe that the stressed asset cycle has already peaked and do not expect any other major project to slip into stress.

What are PFC’s major focus areas for the next one or two years?

PFC has been focusing on diversifying its borrowing portfolio over the past three years and will continue to do so in the coming years. We have raised more than $2 billion from the international markets in the current financial year at highly competitive rates.

We are also focusing on refinancing the commissioned projects to improve our asset profile. We see a significant opportunity in environment upgradation schemes for thermal power projects, both commissioned and under-construction, to comply with the new emission standards. We have already sanctioned some loans for this purpose. We will continue to focus on financing renewable power projects and increasing our asset base substantially. We had sanctioned a loan for sewage water treatment plant, which will feed the treated sewage water to thermal power projects and fresh water would be made available for potable use. We see this as a remarkable opportunity, going forward. Also, financing for e-vehicles is going to be a priority for us.

With rapid urbanisation and the focus of state governments on the effective disposal of waste, we expect significant development on the waste-to-energy projects. We have already funded four such projects and some more are under consideration.

What is PFC’s outlook for the power sector in the next few years?

The power sector is in an exciting phase now and going forward, we expect significant consolidation in the renewable energy segment. The environmental norms are expected to be tightened even further, especially for the older conventional projects. With the successful implementation of Saubhagya, the power demand is expected to increase in future. Coupled with the increase in power demand and the proactive steps taken by the government, we believe that the resolution of stressed power projects is not far away.