The Bombay Stock Exchange (BSE) Power Index tracks the share prices of 16 power companies operating across various segments of the industry and is weighted by free-float capitalisation. Over the past 12 months, it plunged 10.72 per cent, from 2,114.71 points on September 1, 2018 to 1,887.96 points on August 31, 2019. During the same period in 2017-18, it posted a similar plunge in returns, although mild, at 5.48 per cent. Majors such as Adani Power Limited and Kalpataru Power Transmission Limited were among the best stock performers during the review period. At the bottom of the chart were Reliance Infrastructure Limited and Bharat Heavy Electricals Limited (BHEL).

An overview of the stock market performance of BSE Power Index companies during the period from September 1, 2018 to August 31, 2019…

Generation companies registered a negative return of 2.13 per cent (unweighted average) in the review period, which is a significant decrease as compared to their previous year, when they recorded a positive return of 5.33 per cent.

NHPC Limited, the country’s largest hydropower producer, witnessed a drop of 8.64 per cent in its share price in the current review period as compared to a drop of 12.28 per cent during the same period in the previous year. The company’s consolidated income stood at Rs 98.47 billion in 2018-19 as compared to Rs 87.86 billion in 2017-18, recording an improvement of 12.08 per cent. It also registered a 1.83 per cent increase in its PAT, which went up from Rs 27.85 billion in 2017-18 to Rs 28.36 billion in 2018-19. The capex incurred during 2018-19 was Rs 22.13 billion, and is estimated to reach Rs 38.06 billion in 2019-20 after the resumption of active construction works at the Subansiri Lower Project and the clearance of pipeline projects. During 2018-19, NHPC’s installed capacity stood at 7,071 MW on a consolidated basis and 5,551 MW on a stand-alone basis, which includes 50 MW each of solar and wind power. Projects of 7,361 MW installed capacity are at various stages of clearances/approvals. The company is currently engaged in the construction of two hydroelectric projects: Parbati II (Himachal Pradesh) and Subansiri (Assam/ Arunachal Pradesh) with an aggregate installed capacity of 2,800 MW. Another 1,624 MW of capacity is under construction through JVs. The company has initiated the process for the development of a 10 MW floating solar power project in Kallada, Kerala, and 72 MW capacity of wind power projects in Kerala. NHPC in a joint venture with Uttar Pradesh New and Renewable Energy Development Agency is also in the process of setting up a 32 MW solar power project in Uttar Pradesh. The company recorded power generation of 24,193 MUs in 2018-19. It achieved a plant availability factor (PAF) of 84.97 per cent during 2018-19, as against 85.32 per cent during the previous financial year. Its new venture, power trading, has also started yielding results. During 2018-19, the company earned a revenue of around Rs 0.13 billion from its power trading business.

Private power major Tata Power experienced a decline of 27.29 per cent in its share price during the period under review. Tata Power’s consolidated income in 2018-19 stood at Rs 299.54 billion as against Rs 272.73 billion in 2017-18, reporting a growth of 9.83 per cent. Meanwhile, its net profit stood at Rs 24.4 billion in 2018-19 as against Rs 26.11 billion in 2017-18, a decline of 6.53 per cent due to lower profits from coal companies on account of lower freight-on-board (FOB) price. The company has an operational generation capacity of about 10,957 MW. Its renewable power business added 200 MW in the past year with another 400 MW in the pipeline. It also launched residential solar rooftop solutions in several cities and installed 65 electric vehicle (EV) charging points across the country. The company is in the process of acquiring the 1,980 MW Prayagraj power plant in Uttar Pradesh. Regarding Coastal Gujarat Power Limited, further to the recommendations by a high powered committee set up by the Gujarat government, the company is in discussions with various state governments and state discoms, and expects a compensatory tariff soon.

Adani Power Limited, the largest private thermal power producer in India, registered an increase of 73.55 per cent in its share price during the review period. The company’s income stood at Rs 263.62 billion in 2018-19, an increase of 25 per cent from Rs 210.93 billion in 2017-18. Adani Power’s net loss saw some improvement, to stand at Rs 9.84 billion in 2018-19 as against a net loss Rs 21.03 billion in 2017-18. It has an operational thermal power portfolio of 12,410 MW across six projects apart from a 40 MW solar power project in Gujarat. It has an under-construction portfolio of 1,600 MW. The average PLF achieved during 2018-19 was 64 per cent as against 55 per cent achieved during 2017-18, while the total generation stood at 58.47 BUs in 2018-19 as compared to 50.82 BUs in 2017-18. A major relief for the company was the Central Electricity Regulatory Commission approving Adani Power’s revised PPA for its Mundra power project (4,620 MW) with Gujarat. The relief for the power generator comes after seven years of pleading for pass-through of the increased cost of imported coal. 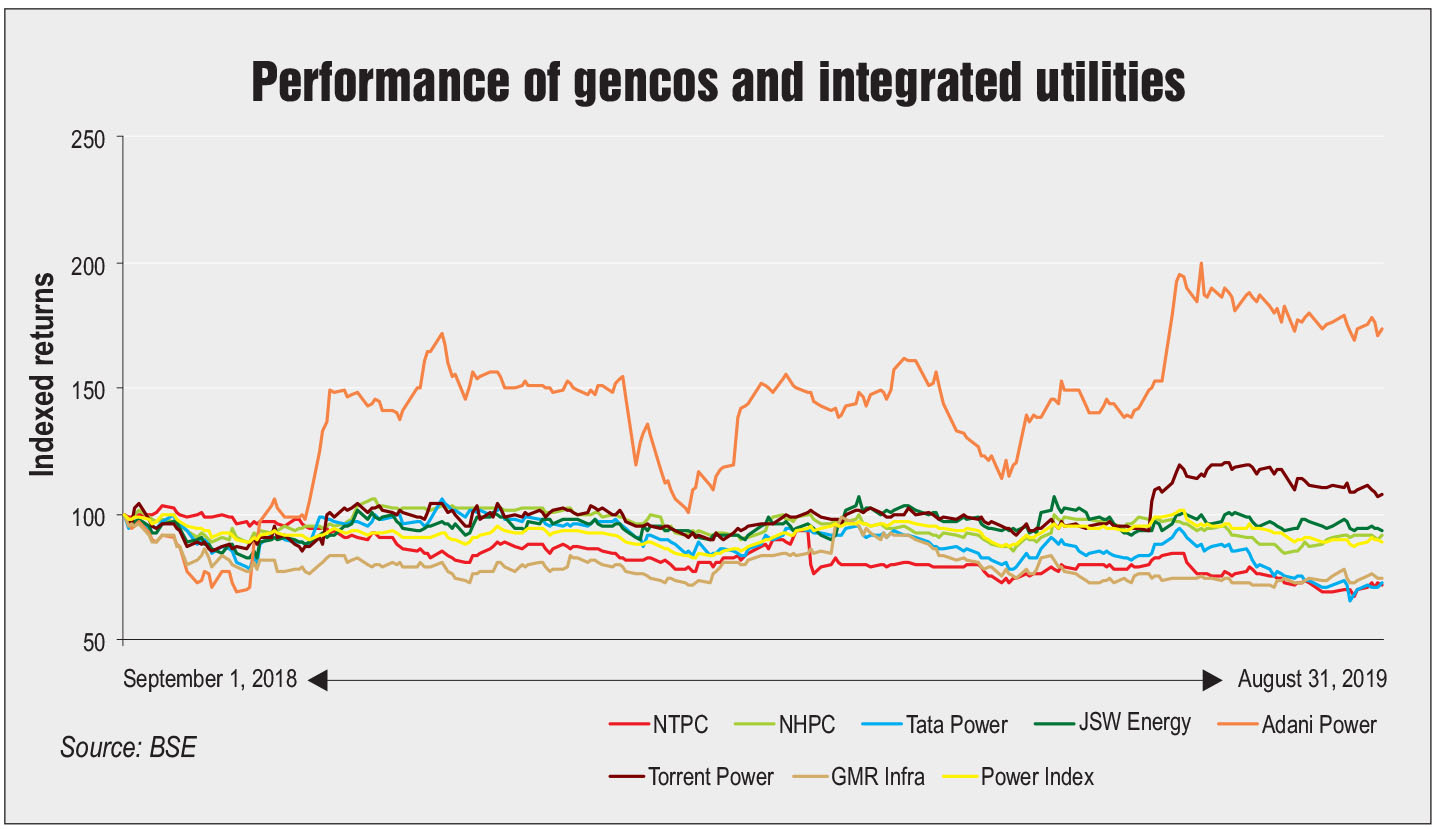 During the review period, Torrent Power’s share price increased by 7.69 per cent. The company’s total income rose by 13.29 per cent, from Rs 117.76 billion in 2017-18 to Rs 133.41 billion in 2018-19. The net profit declined 5.07 per cent and stood at Rs 9.04 billion in 2018-19 as compared to Rs 9.52 billion in the previous year. The company’s total generation capacity during 2018-19 stood at 4,553.8 MW (including 851.3 MW of under-construction capacity) spread across thermal and renewable generating assets. During 2018-19, the net generation and PLF of AMGEN’s thermal assets stood at 2,550 MUs and 87.84 per cent, respectively, while for SUGEN the figures were 6,105 MUs and 62.29 per cent, respectively. The UNOSUGEN and DGEN projects did not operate during the year primarily because of want of demand. The company operates as a licensee for power distribution in the cities of Ahmedabad, Gandhinagar, Surat and Dahej, aggregating 425 square km and as a franchisee for power distribution in the cities of Bhiwandi and Agra, aggregating 942 square km. During 2018-19, the company was awarded a distribution licence for the Dholera Special Investment Region (920 square km) for 25 years as an additional licensee and was awarded the distribution franchise for the Shil, Mumbra and Kalwa areas by Maharashtra State Electricity Distribution Company Limited, based on competitive bidding for a period of 20 years. 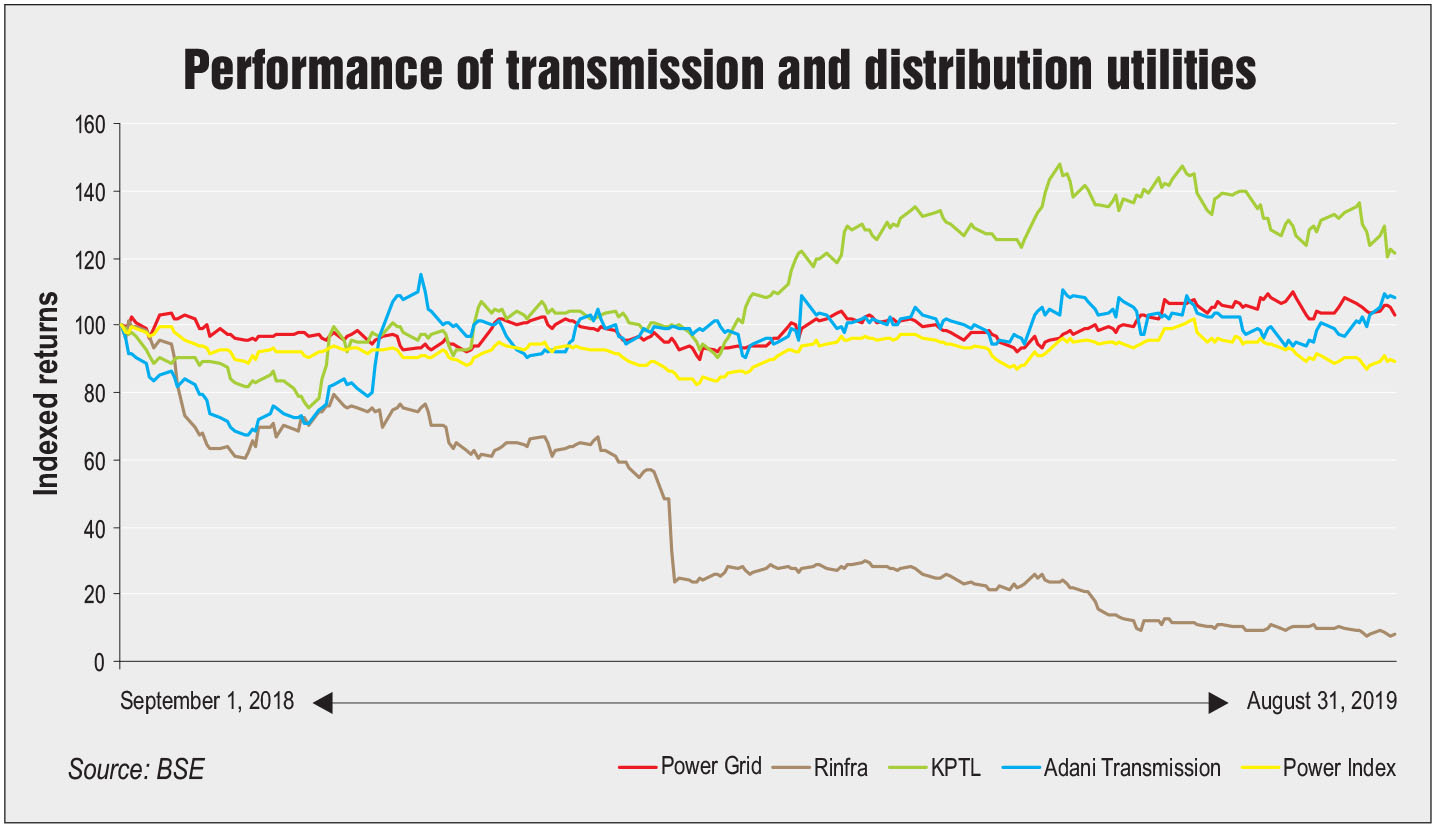 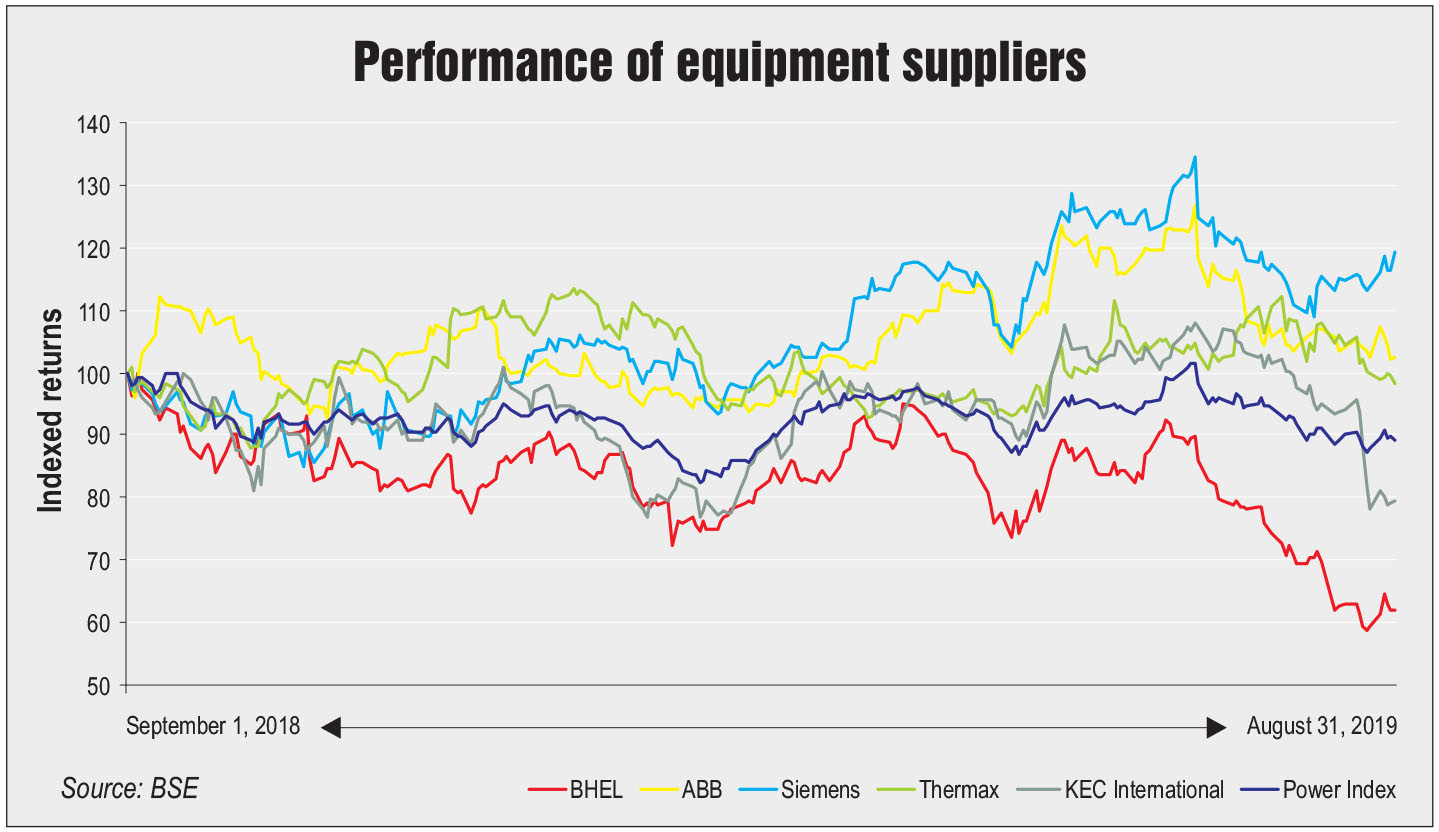 Powergrid’s shares witnessed a 2.98 per cent increase in the past year. In 2018-19, the consolidated income of the company stood at Rs 356.61 billion as compared to Rs 304.31 billion in 2017-18, registering an increase of 17.19 per cent. During the same period, the company’s profit increased by 22.3 per cent and stood at Rs 100.34 billion in 2018-19 as against Rs 82.04 billion in 2017-18. As of March 2019, it owned and operated a transmission network of 1,58,298 ckt. km of inter-state transmission lines, and 245 EHVAC and HVDC substations with a transformation capacity of 371,912 MVA. It added 8,468 ckt. km of EHV transmission lines, 40,119 MVA of transformation capacity and 10 new substations during 2018-19. The capital expenditure incurred was Rs 258.07 billion against the target of Rs 250 billion during the year. Under tariff-based competitive bidding (TBCB), Powergrid secured its first intra-state transmission project – establishment of transmission system for evacuation of power from the 2 x 660 MW Jawaharpur thermal power project and construction of a 400 kV substation at Firozabad along with associated transmission lines – during the year, taking the total portfolio of TBCB projects won by the company to 13. Private major ATL showed an increase of 8.09 per cent in its share price during the review period. The company’s consolidated income stood at Rs 75.61 billion in 2018-19 as compared to Rs 40.55 billion in 2017-18, recording an 86.45 per cent increase. Meanwhile, the net profit decreased from Rs 11.43 billion in 2017-18 to Rs 5.59 billion in 2018-19. ATL owns around 11,348 ckt. km of transmission lines with a total transformation capacity of 18,330 MVA, while its Mumbai power distribution business (acquired from RInfra) caters to around 3 million consumers. As of September 2019, the transmission projects under execution comprised 2,869 ckt. km of lines and 4,950 MVA of capacity. The company’s transmission network availability stood at 99.84 per cent in 2018-19, while its distribution network losses were only 7.77 per cent. During financial year 2019, a major highlight for the company was the operationalisation of six new transmission projects of 1,650 ckt. km. Another significant highlight was the winning of two new TBCB projects (Obra-C and Ghatampur) of about 1,510 ckt. km. The company also acquired one transmission asset of 343 ckt. km from KEC International Limited.

Power transmission and EPC company KPTL showed an increase of 21.33 per cent in its share price during the review period. During 2018-19, KPTL made a strategic investment to enhance its position in the global T&D EPC business by acquiring an 85 per cent equity stake in Swedish firm LinjemontageiGrastorp AB (LMG). Recently, KPTL entered into a binding agreement with CLP India to sell three assets – Kalpataru Satpura Transco Private Limited, Alipurduar Transmission Limited and Kohima Mariani Transmission Limited – for an estimated enterprise value of Rs 32.75 billion. The consolidated income of the company grew by 24.15 per cent, from Rs 87.67 billion during 2017-18 to Rs 108.85 billion in 2018-19. KPTL’s net profit registered an increase of 75.05 per cent and stood at Rs 4.87 billion in 2018-19 as against Rs 2.78 billion in 2017-18.

The stocks of power equipment players, including BHEL, ABB India, Thermax, Siemens India and KEC International, registered a negative return of 7.74 per cent (unweighted) during the review period.

ABB registered an increase of 2.51 per cent in its share price during the period under consideration. During 2018, ABB’s orders reached Rs 101.15 billion as against Rs 94.9 billion in the previous year, witnessing a growth of 6.58 per cent, and reflecting the technology push and continued traction in transportation and renewable energy. The company’s revenue from operations registered a growth of 19.53 per cent in the previous fiscal (January to December 2018) with a total revenue of around Rs 108.62 billion as against Rs 90.87 billion in 2017. The net profit for the year 2018 was Rs 5.11 billion, 21.67 per cent more than the profit of Rs 4.2 billion recorded in 2017. ABB’s power grid division’s revenues were Rs 42.22 billion in 2018 as compared to Rs 31.29 billion in 2017.

Despite the challenges faced by power sector companies, the sector is expected to see sustained growth on account of government initiatives and reforms. Key amongst these would be UDAY 2.0, which will look at interventions in terms of technology and additional infrastructure such as aerial bunch cables and smart metering. This will create opportunities for major equipment players. There will also be opportunities for sector players with the government focusing on the privatisation of power distribution to address systemic inefficiencies. Going forward, the demand for power is expected to grow in order to cater to the continued economic growth of the country, thereby creating more volume in the power market. Further, the target of providing universal access to electricity will result in the addition of generation capacity as well as significant expansion of the T&D networks.