Today, the purchase price and driving range of electrical vehicles (EVs) are the biggest hurdles to a wider consumer adoption – and both are linked inextricably to battery economics. Since the battery today accounts for about one-third of the total purchase price of an EV, driving down battery costs through rapidly scaling production and standardising battery components could be a key element of long-term success for India’s automotive sector. In line with the aspiration to achieve a target of deploying 30 per cent EVs by 2030, India is expected to be a major hub for manufacturing batteries. According to NITI Aayog’s estimates in a 2017 report, India’s cumulative EV battery requirements between 2017 and 2020 will be atleast 120 GWh on a trajectory of 100 per cent EV sales by 2030. Further, India’s market for EV batteries alone could be worth as much as $300 billion from 2017-30.

How battery EVs can help the grid

Battery EVs (BEVs) contain large capacity battery, and they could act as distributed power storage devices in cities, thus, potentially reducing the risk of blackouts and generating intermittent renewable energy. As EVs become more mainstream, the collective capacity of their batteries and ability to store electricity will be huge. Significant numbers of EV owners, who allow access to even a small percentage of their EV batteries, will collectively provide balancing power through vehicle-to-grid (V2G). V2G describes a system whereby plug-in EVs, including BEVs, hydrogen fuel cell EVs (FCEVs) or plug-in hybrids (PHEVs) have the ability to export electricity to the utility provider. 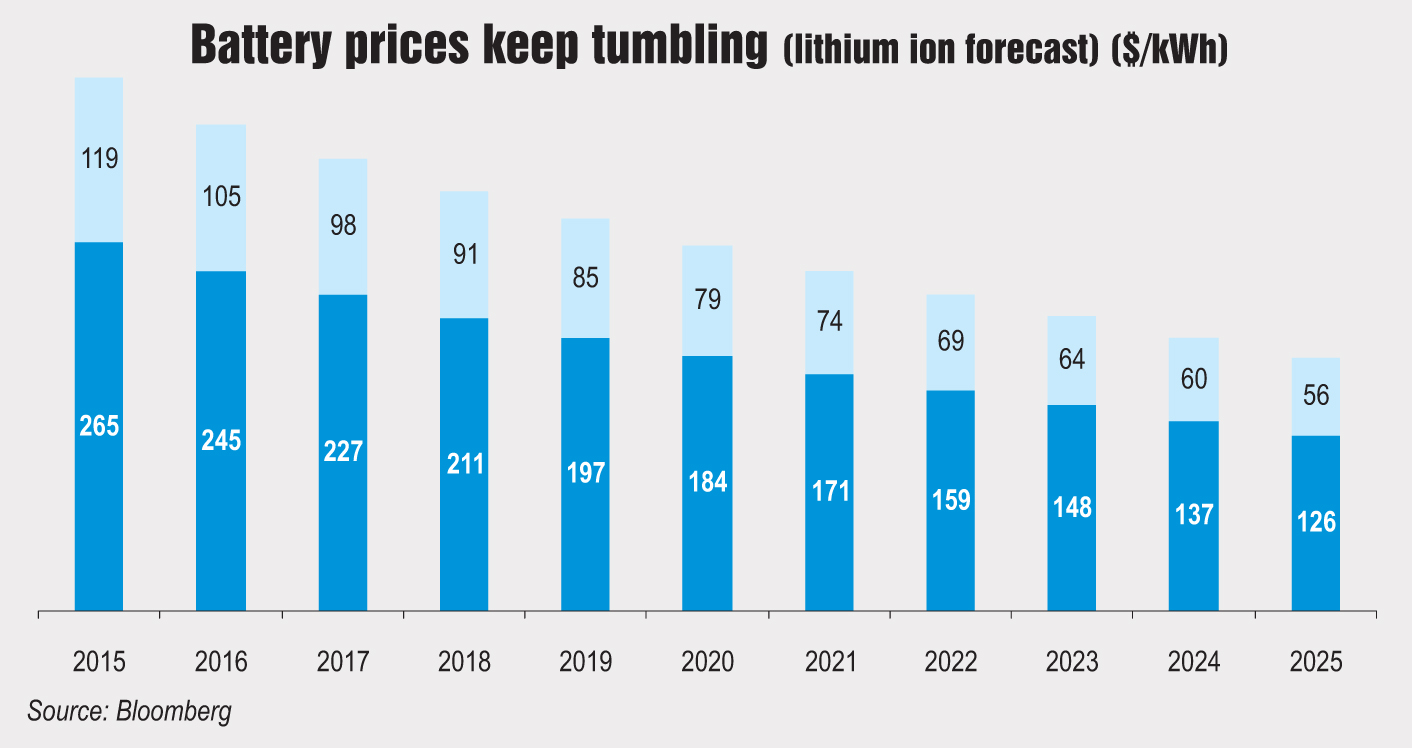 Owing to the variable output of all sources of electricity generation, especially renewables, operators of the grid are increasingly looking for providers of balancing service organisations that can either absorb power when generation outstrips demand, or supply power when demand is higher than generation. The batteries in EVs are ideal to provide such balancing, assuming power is able to flow in either direction. When plugged in, batteries in these vehicles could provide many of the grid services that stationary energy storage systems can provide and can also be actively managed to reduce the impact that their charging can have on the electric grid.

GridServe, a solar solution provider in the UK is installing a 34 MWp solar PV with 27 MW battery storage to support grid-independent EV charging stations in 2019. About 100 more stations are to be built across the country for a total investment of $1.7 billion by 2024. Benefits include grid independence, reduced concerns on peak demand pricing, and ensuring that electric power is generated from renewable sources. Another noteworthy example is a solar powered battery swapping station, set up by the Indian start-up Sun Mobility, a turnkey solar power solution provider, for e-buses, two-wheelers and three-wheelers in India. The typical swapping time is one minute for two-wheelers and three-wheelers and three minutes for e-buses. This significantly reduces the range anxiety of EV users. However, the drawbacks are high capex, requirement of robotics for changing e-bus batteries and need for design standardisation for incorporating this model into four-wheelers.

Concerns and the way forward

Most consumers today have concerns over the range, poor battery life and the high initial price. Another challenge is that batteries have a finite number of charging cycles and shelf-life. Therefore, using vehicles as storage can impact battery longevity.

Currently, only a few companies are engaged in battery cell manufacturing. Due to low domestic expertise, a large number of components for EV, especially batteries are imported from Japan or China, which are often of low quality. To step up indigenous production of battery cells, efforts are being made to remodel the battery made by the Indian Space Research Organisation (ISRO) so that it can be used in e-vehicles. However, it will take time, to scale up production of battery made by ISRO. ISRO had earlier shortlisted 15 companies to transfer the manufacturing technology for lithium-ion (Li-ion) batteries for EVs. There is also a surge in interest from domestic and global players to manufacture batteries domestically, given the government’s thrust on e-mobility. Earlier this year, the state-run oil refiner, Indian Oil Corporation Limited announced plans to set up a 1 GW plant to make batteries used for running EVs, in partnership with an overseas start-up using a non-Li-ion raw material that is locally available. Meanwhile, the union cabinet has approved the National Mission on Transformative Mobility and Battery Storage, which is a positive intervention. The mission will finalise and implement strategies for transformative mobility and phased manufacturing programmes (PMPs) for EVs, their components and batteries. A phased roadmap to implement battery manufacturing at giga-scale will be the initial focus on large-scale module and pack assembly plants by 2019–20. This will be followed by integrated cell manufacturing by 2021–22. Details of PMPs for batteries will be formulated by the mission. The mission will ensure holistic and comprehensive growth of the battery manufacturing industry in India. 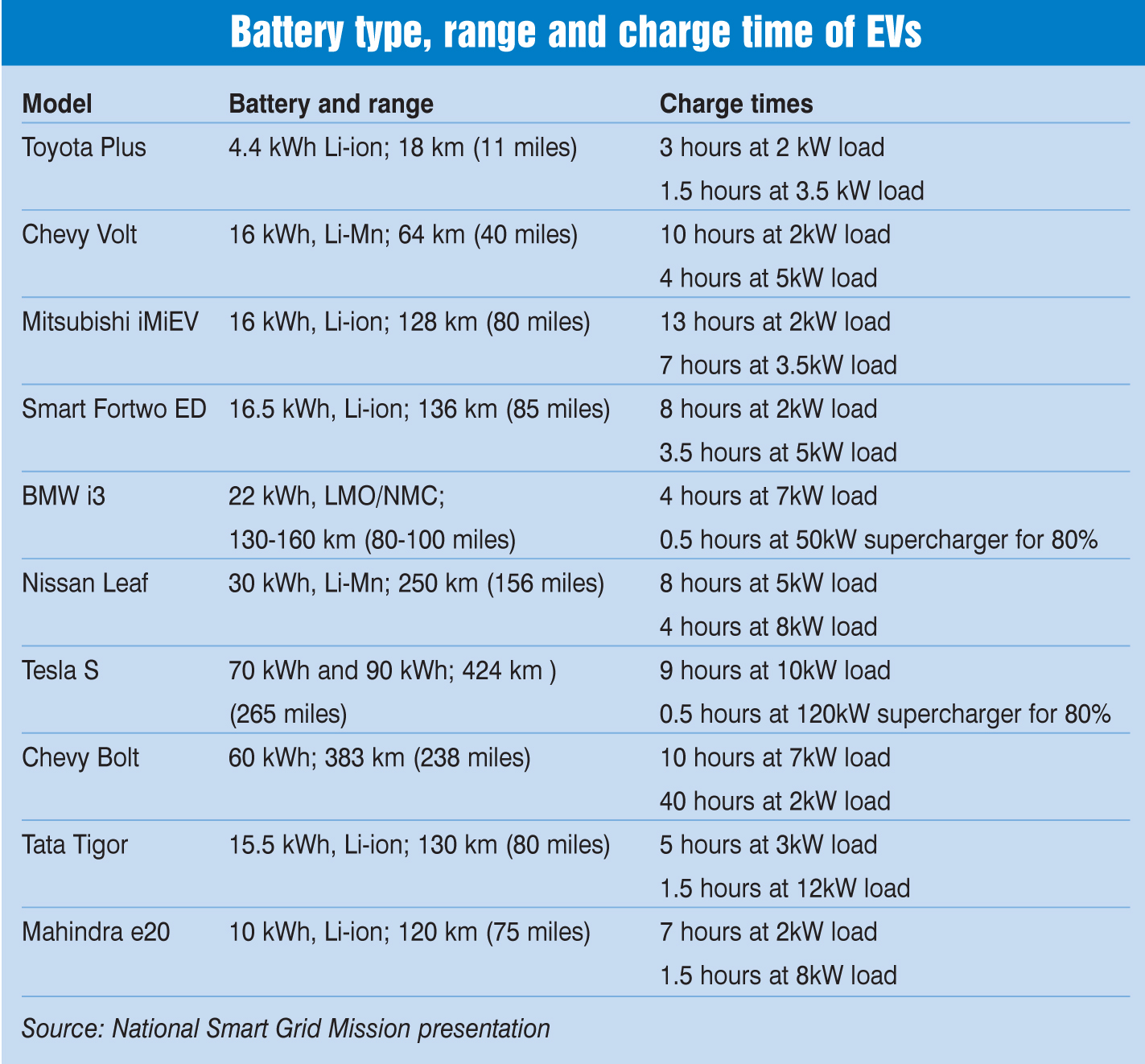 Further, anticipating future demand for Li-ion batteries used in EVs, a proposal has been introduced by the NITI Aayog to set up domestic manufacturing of 50 GWh batteries by 2030. NITI Aayog has recommended financial incentives to investors such as cash subsidies to promote setting up giga-scale battery manufacturing. The estimated annual subsidy is slated at Rs 80 billion (approximately $1.14 billion). To avoid monopoly, the cash subsidy limit would be 20 GWh per company. Companies bidding for subsidies will have to opt for a minimum of 5 GWh manufacturing of batteries within five years. If the period is extended, the cash subsidy per kWh will be lowered. NITI Aayog has also inferred that 79 per cent of the battery pack can be home-grown, while 21 per cent of the minerals need to be sourced from other countries. To make it an investor-friendly scheme, a proposal for complete tax exemption on capital expenditure in the first year, and land and other clearances are being planned.

The dramatic increase in EV numbers means that the potential battery market is huge. Thus, car manufacturers, policymakers, and potential battery suppliers have strong economic and strategic incentives to ensure local battery production in the country.