Established in 2009, Assam Power Distribution Company Limited (APDCL) has been making continuous efforts to improve its performance. As the sole distribution licensee in Assam, APDCL is responsible for the development and management of power sub-transmission and distribution infrastructure in the state. In recent years, the discom has been focused on implementing a number of initiatives under the R-APDRP, DDUGJY, IPDS and Asian Development Bank (ADB)-funded schemes to enhance the reach, reliability and quality of electricity for end consumers, and improve its financial position. Under the UDAY scheme, for which it signed an MoU in January 2017, it has been able to reduce its aggregate technical and commercial (AT&C) losses to a level of 21.1 per cent in 2018-19 from the pre-UDAY level of over 25 per cent. The discom has also improved its rank from B to B+ in the latest discom ranking report compiled by the Ministry of Power (MoP). Meanwhile, APDCL has recently completed a smart grid pilot project under the National Smart Grid Mission (NSGM), covering around 15,000 consumers in the Guwahati distribution area.

APDCL has taken several initiatives to modernise and upgrade its infrastructure. APDCL’s in-house IT team has designed and developed a spot billing Android-based mobile app, APDCL e-suvidha. It captures the route map of the meter reader–cum-spot biller, thereby ensuring that no bills are prepared without visiting the consumer premises. This encourages consumer engagement, and reduces consumer complaints, dependency on third-party implementers and recurring expenditure.  It ensures proper monitoring of the meter reading and billing process, and timely receipt of bills by consumers, providing them adequate time for payment. SANJOG is another in-house mobile application designed and developed by APDCL’s IT team for releasing new connections on the spot. The photos of the beneficiaries as well as their ID and address proof documents can be scanned and uploaded on the app.

Under the government’s R-APDRP, APDCL successfully brought all its urban consumers under a centralised SAP-based billing system hosted in a data centre in Guwahati, enabling a centralised data repository and monitoring. AT&C losses have been brought down from 40 per cent to 18 per cent against the urban project areas after the implementation of the R-APDRP. APDCL has successfully completed SCADA automation in Guwahati. Under the project, 34 substations are covered. The project has enabled APDCL to monitor its distribution network status in real time and take up preventive maintenance wherever applicable. The project has also helped in improving power reliability in the city by isolating fault sections in many areas.

A noteworthy initiative by the utility has been the completion of smart metering with AMI project in Guwahati city, covering 14,519 consumers, under the NSGM. A data concentrator unit based on radio frequency (RF) mesh has been used as the communication technology. At the smart grid control centre in Guwahati, 97 per cent of the meters are using communication technology. The project has enabled revenue billing on the basis of automated meter reading and has enabled remote disconnection of power at defaulting consumer premises. After the implementation of the project, the AT&C loss in the pilot project area has reduced to 14.2 per cent from 23.6 per cent. The project was sanctioned by the MoP at a cost of Rs 209 billion. APDCL has also implemented an ERP project, involving material management, finance and human capital management. The utility has also successfully implemented MDAS for HT consumers, urban DTs and feeders. The successful completion of the project enabled system-generated energy audits and their integration into the national power portal.

For efficient service call management, customer care, smart metering, etc., accurate and up-to-date geographic information system (GIS) data for all areas under APDCL (not just in urban areas) is mandatory. APDCL has initiated the bidding process for GIS-based asset mapping and consumer survey. It is also planning to implement smart metering with AMI for 70,000 consumers in the next phase. 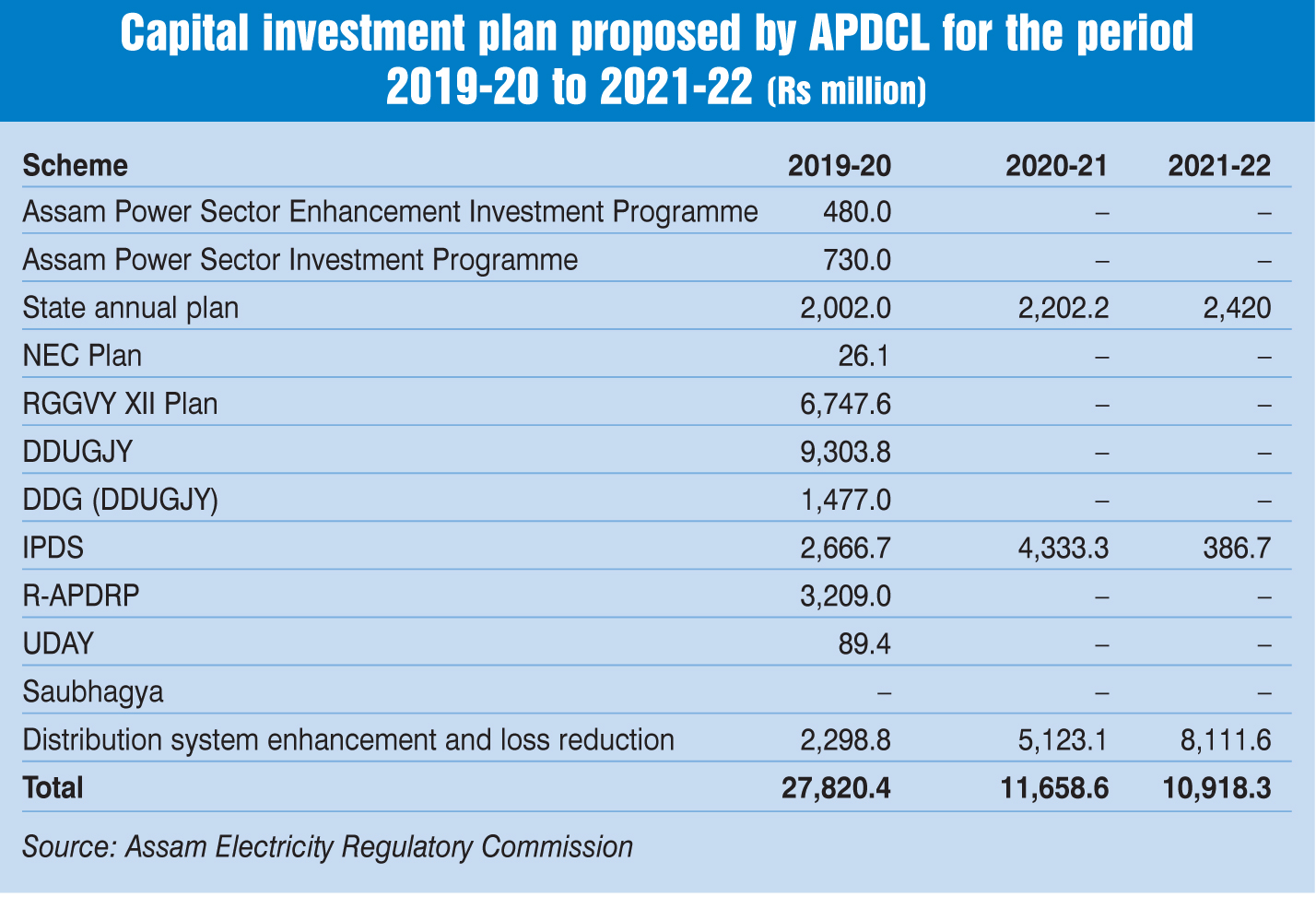 APDCL has designed a mobile app, APDCL EasyPay, for door-to-door revenue collection as consumers are not readily adopting digital payment solutions. The app is expected to go live in October 2019. Also, in order to mitigate the difficulties faced during the implementation of R-APDRP Part A, APDCL has decided to design a centralised billing application. The solution will be hosted on the cloud, for which 70 per cent development has been completed by the APDCL IT team. Further, the discom has come up with a single-window clearance system for accelerating grid-connected solar rooftop installations. It has launched a web portal for consumers willing to install rooftop solar power plants on their premises. In March 2019, APDCL issued a tender for 7 MW of grid-connected solar rooftop projects to be developed on social and institutional buildings in the state under the renewable energy service company model.

Also, with ADB assistance, APDCL is undertaking a number of other projects under the distribution system enhancement and loss reduction project to strengthen its network with the construction of new lines and substations and installation of HVDS systems. The total estimated cost of the project is Rs 33.02 billion, of which the ADB fund is Rs 23.37 billion and the state government fund is Rs 9.65 billion. Overall, the discom has outlined a capex of Rs 27.8 billion for 2019-20, Rs 11.65 billion for 2020-21 and Rs 10.91 billion for 2021-22. A significant capex of around Rs 9.3 billion is expected to be incurred towards the DDUGJY scheme in 2019-20. The discom also plans to incur an investment of Rs 2.66 billion towards the IPDS during the year. Further, during 2020-21 and 2021-22, it will incur an expenditure of Rs 4.33 billion and Rs 0.38 billion, respectively, under IPDS.

In the latest annual integrated ratings report released by the Power Finance Corporation for 2017-18, the discom received a rating of B+, an improvement over the B grade in the previous ranking. This is a reflection of its improvement in cost coverage, AT&C loss level and receipt of subsidy. However, the report has pointed out concern areas for the discom, such as high transmission charges leading to increase in power purchase costs, as well as a high share of employee, O&M and administrative costs as compared to total revenue. These issues notwithstanding, APDCL’s efforts towards grid modernisation and upgradation are expected to overcome the pitfalls of aging infrastructure and help meet the customer demands for reliability.